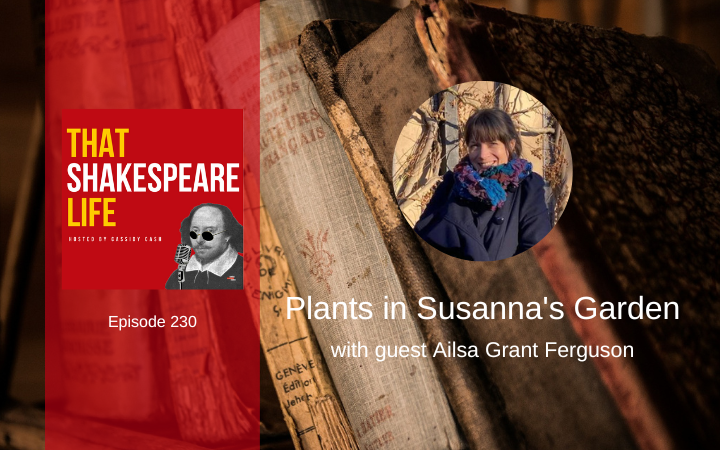 When you visit Stratford Upon Avon, you can stop in and see a place called Hall’s Croft. It is right down the road from Shakespeare’s Birthplace and is the house where William Shakespeare’s oldest daughter, Susanna, lived with her husband, John Hall. John Hall was a physician in Stratford Upon Avon, and is thought to have influenced, if not outright advised, Shakespeare on the many uses of medicinal plants we see come up in his plays. A new study being led by our guest this week, Ailsa Grant Ferguson, not only aims to shed light on the kinds of plants that might have been used there at Hall’s Croft, but looks to literally re-plant them. In a project funded by the Arts and Humanities Research Council, partnering with the Shakespeare Birthplace Trust in collaboration with the University of Brighton, Susanna’s Garden project will plant a sensory, wellbeing garden based on the plants used for women’s health by John Hall and probably Susanna in Stratford Upon Avon that includes the same plants Ailsa research reveals would have been used there by the Hall family to treat family and friends in the bard’s hometown. The exciting thing about this garden is not only the opportunity to see historic plants come literally back to life, but as Ailsa Grant Ferguson joins us today to share, this garden research project specifically explores Susanna’s role in medical care as she worked alongside her husband as a healer.

Ailsa Grant Ferguson is Principal Lecturer at the University of Brighton and she is currently holder of an AHRC RDE Fellowship, as PI for a major research project, in collaboration with the Shakespeare Birthplace Trust, focusing on Shakespeare's daughter, Susanna and her home, Hall's Croft, and the mediation of early modern women in heritage presentation and cultural memory.

Access to a doctor was not always convenient, and getting one to come to your house could be prohibitively expensive. That's why, for many families, the wife and mother was often well educated in basic first aid and treatment of physical illness through the use of plants they grew in a garden.

…there was a reality that domestic medicine for their own families, and the wives of physicians particularly in helping their husbands, this practice is widespread. There are no antibiotics, or germ knowledge, and there’s not even hand washing for having a baby and people, your everyday people, needed to be able to treat themselves. To call in a specialist like a doctor or apothecary was expensive, so doing it yourself was important and women were considered very important and necessary for this work. People are starting to see medicine as something you need to qualify for, women were not doing this, but you do have really respectable women…Grace Mildmay… she creates remedies on a bulk scale and treating a wide range of patients. It’s not surprising at all that Susanna would contribute to the treatment of patients. The link with witchcraft is quite interesting. The accusation of witchcraft goes hand in hand with living your life in a way that’s not acceptable. Living alone, unmarried, or women with behaviors that are unusual or eccentric/different in some way, and then combining those traits with doing treatments with “unsupervised” remedies, that’s when they get suspected of being a witch, but it’s more about the context of how they were creating these treatments rather than just being able to concoct domestic medicine.

There was a stigma surrounding women's health leading up to the 16th century that suggested a woman was just hysterical or perhaps possessed by a demon whenever she had period pain, problems with her reproductive system, or hormonal imbalances. Ailsa's work into understanding Susanna's garden reveals that in Susanna's lifetime there was a real effort on the part of at least some physicians like John Hall, to not only understand women's issues scientifically, but to begin treating them with medicine derived from plants.

As a male practitioner, John Hall would have been treating all sorts of patients. This project is focusing on plants used by Hall from his casebooks, and more widely by other practitioners but specifically for women’s health. We see treatments for menstrual problems, skipped periods, heavy periods, and we would see lots of treatments for something called “suffocation of the mother” but basically at that time you had new ideas about women’s health, and stepping away from the idea that women were spiritually being ill affected, and now seeing these issues as biological and the idea of the hysteria and the idea of the womb being difficult and pernicious. The good news by women is that it’s not being cursed by a demon. Suffocation of the mother is akin to PMS/PMT, anxious, in pain, unable to sleep, and sometimes it was called “suffocation of the mother” and it means that the womb is suffocating/blocked. It was treated a lot or something called uterine passion, and translates similarly. We also see treatments for post birth fever and averting miscarriage, save miscarriages, and treat women who were struggling after it with things like frenzy after birth.

While there are not many casebooks from the period to work from, John Hall's casebooks are an exception. Ailsa identifies several plant varieties that would have been grown at Hall's Croft that will now be replanted in the new garden at Hall's Croft to bring this history back to life. Some of the plants she mentions are marigold, rhubarb, peonies, blessed thistle, and roses.

You can see an image of John Hall's casebook where he talks about the treatment of his wife, Susanna, at the Shakespeare Birthplace Trust website.

Episode 008: Interview with Ben Crystal about Shakespeare and Original Practice
Ep 186: Stratford Upon Avon Flooded 1588 with Laurie Johnson
Ep 193: The King of Moors with Maria Shmygol