Did Shakespeare Really Use a Quill Pen? 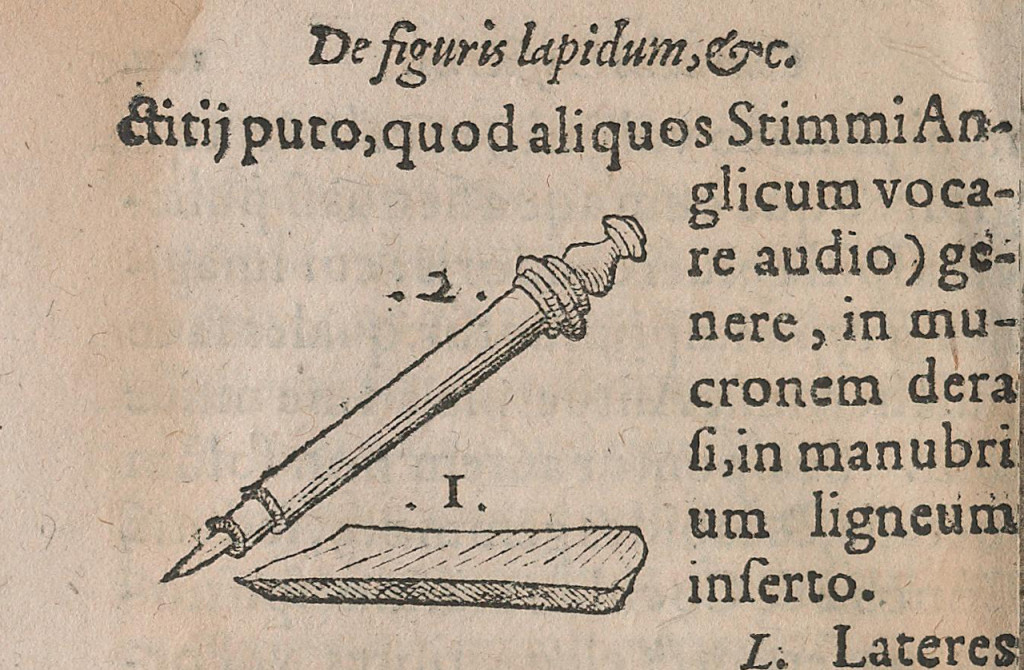 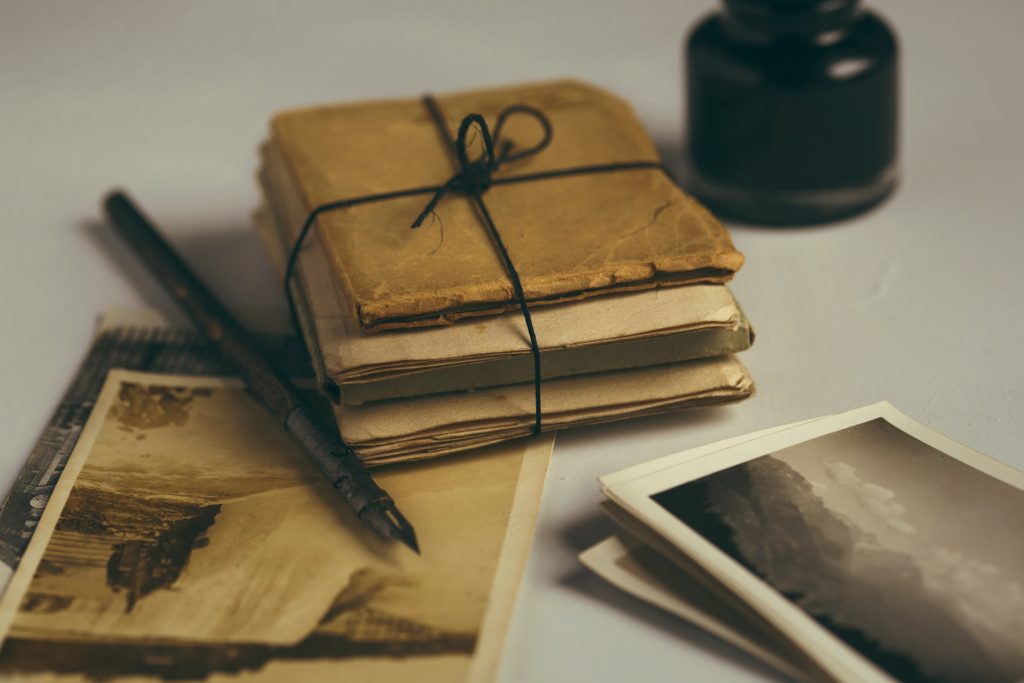 This week at That Shakespeare Girl we’ve been exploring Part 2 of  the world of Shakespeare’s quill pen. Part 1 took a look at whether or not he used a quill pen and answered the question about what kind that would have been. (No massive feathers like we see in pictures.) This week, we are taking the exploration one step further just to answer a fun question that came up during last week’s adventure. Could Shakespeare have used a graphite pencil similar to what we use today?

Honestly, I expected this exploration to be a short little trip down Obvious Lane.However, once I started looking into the actual writing instruments of the 16th and 17th century, it turns out that the quill pen we think of as very Shakespearean, and indeed the entire impression we have of Renaissance writers, could have actually been influenced by the stage presentation of writing drafted by Shakespeare himself.

You see, at the start of Shakespeare’s life a large store of graphite was discovered in Borrowdale, England. Legend holds that the graphite was accidentally uncovered by some shepherds, who used the graphite to mark their sheep and it was only a short hop, skip, and a jump from there until society started to recognize the benefits of graphite as a general purpose writing instrument.

By the late 16th century, England held the world monopoly on pencils. Keswick Pencil Company, which used to be located at the site of the current Derwent Pencil Company, was producing pencils and exporting them right at the heart of Shakespeare’s lifetime.

Konrad Gessner (Note that I have seen his name spelled at least two ways, see here and here, so this spelling I’m choosing here is just that-my choice–since there seems to be some discrepancy) wrote a book in 1565 about fossils. Now, I haven’t read his entire book (you can view most of it here) so I can’t explain to you why a book on fossils included the first published illustration and description of a graphite pencil, but it did. Here it is: 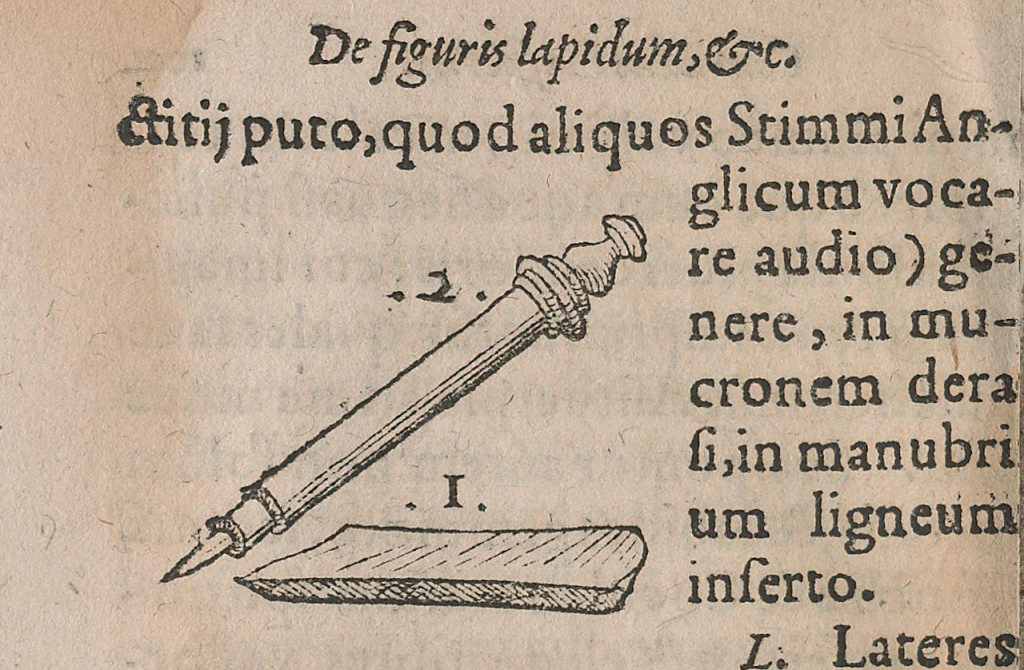 Ben Jonson references the graphite pencil, which was commonly called “black lead”, in his play Epicoene, as part of a mathematician’s tool box.

“For the mathematics: his square, his compasses, his brass pens, and black-lead, to draw maps of every place and person where he comes.”

Further, in several plays of the period, we can see that the stage direction tells the actor to stand and write.

Stage directions in several other Renaissance plays show that Hamlet is not the only character to use tables onstage: “Draw[s] out his Table-booke” (Loues Labour’s Lost); “Balurdo drawes out his writing tables, and writes” (Antonios Reuenge); “He drewe furth his writing tables” (The Cuck-Queanes and Cuckolds Errants); “Writes in his tables” (The Sparagvs Garden); “Pulls out a Table Book” (Pandora); “takes a Memorandum in his Table Book” (The Fair Example).4 Tables are also alluded to within the dialogue of the playtexts: “Draw your tables, and write what wise I speake” (Iames, slaine at Flodden); “Boy my Tables? . . . Your Tables are ready Sir” (Everie Woman in her Humor); “the author defies [his critics], and their writing-tables” (Euery Man Ovt of His Hvmovr); “Write you that in your table booke” (Apollo Shroving); “I will put all dow[n]e in my Table-book, and con it by the way” (The City Wit); “out with your Table-books” (The Guardian); “I’l note that down in my Table-book” (The Citizen Turn’d Gentleman).5
SOURCE: Hamlet’s Tables and the Technologies of Writing in Renaissance England PETER STALLYBRASS, ROGER CHARTIER, J. FRANKLIN MOWERY, AND HEATHER WOLFE as published in the Shakespeare Quarterly

It’s noted by historical experts when analyzing Hamlet that it would have been impossible for the actor to walk around writing if the mode of writing was indeed a quill pen and ink. It required multiple items to write with quill and ink, which would have not been easy to stand around with but especially not to walk about writing. It is thought, then, that logically the writing instrument being referred to there is probably a writing tablet.

[bctt tweet=”Tables were indeed the ideal prop for an actor called on to take notes as he stood on the Renaissance stage.” username=”thatshakespeare”]

Often when setting up a writer’s table on stage, it included the feather pen, the ink pot, and other accouterments of a quill and ink setup for writing. Was that because it looked better on the stage? Since Hamlet was using a writing table (the renaissance equivalent of a notebook) and walking about to write his notes during the play, it’s conceivable that at the very least two modes of writing were interchangeably popular during Shakespeare’s lifetime. It could be that quill and ink writing was just one of the many ubiquitous images of the Renaissance period that was well on it’s way to becoming obsolete during Shakespeare’s lifetime. The giant feather pen, an elegant ink pot, and the scraping of a feather tip onto paper certainly evokes the correct images for the frustrated lines in Hamlet. Was it a staging trick? Or did writers really use quill and ink as their go to writing instrument? It seems that along with inventing so many words, Shakespeare might have also invented the image of a writer for the stage.

The graphite pencil was popular for writers, particularly stage actors, during Shakespeare’s lifetime. Additionally, the writing tablet came that we think Hamlet was using in the above example, came into fashion in the early 1600s. It would have been made of leaves of paper. Most commonly, graphite pencils and bread slices for erasers were used to make the writing tablet re-usable. You could write, erase, then use it again. It was great for actors on stage who would need to take notes (Source).

It was heralded as a great invention among writers because of the advantages it gave a writer over the traditional method used by scribes and scholars. So, in the words of Sophia at the Derwent Pencil Company, “it’s feasible to think that Shakespeare used a graphite pencil.”

When I contacted the Folger Shakespeare Library for direction on where to search further, I inquired as to whether the existing writings of Shakespeare were done in graphite.

They informed me that there are not that many surviving manuscripts written in Shakespeare’s hand specifically, but of the ones they do have it is believed they are done in ink. That doesn’t preclude Shakespeare from having used a graphite pencil, but the exiting manuscripts are not sources of evidence in the case I was trying to make.

What I did find interesting about formal documents like the mortgage, court deposition, and personal will which comprise some of the handwriting of Shakespeare himself which is preserved, is that formal documents were sometimes drafted in graphite where you could erase any potential changes or errors, before being traced over in ink to make it permanent.

So will we ever know for certain if Shakespeare used a graphite pencil? We can’t know for certain, but we can tell that there is a great deal of evidence suggesting that the world’s greatest writer may just have written with the same kind of pencil our aspiring writers use today.

How’s that for encouragement?

Access the video tutorial on how to make your own iron gall ink, 16th century quill ink, and printable history guides on this topic inside the digital streaming app for That Shakespeare Life. Explore the App here.