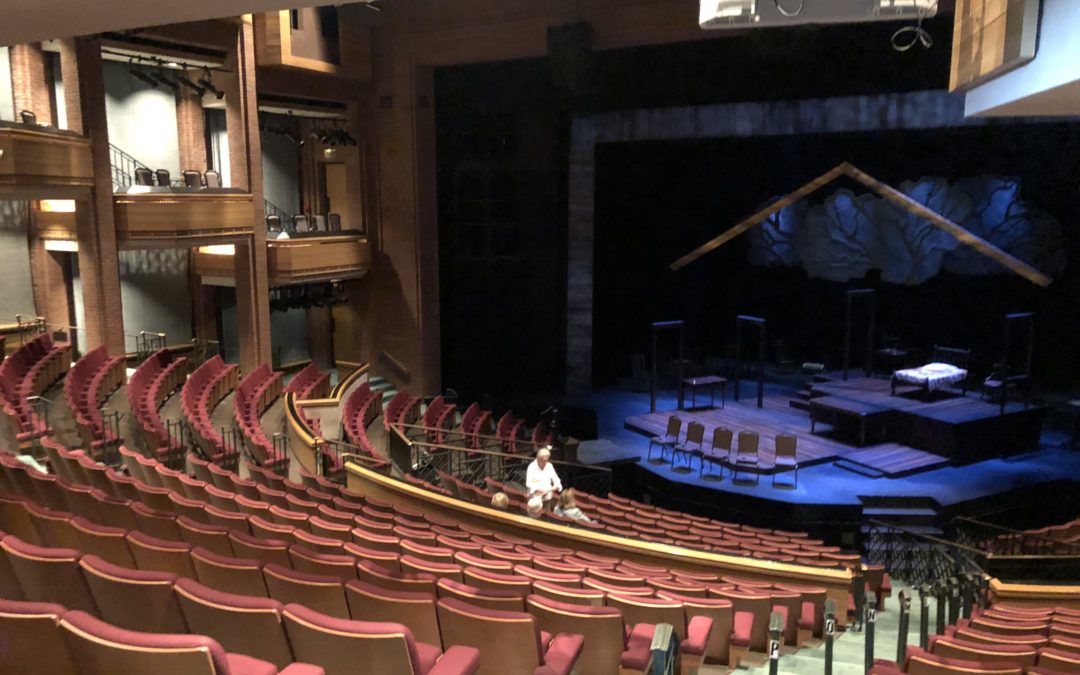 Recently, I had the privilege of attending William Shakespeare’s Twelfth Night at the Alabama Shakespeare Festival in Montgomery, AL. I came into this play with high expectations and left entertained, but disappointed. Unfortunately, this production took the “comedy” genre too literally and staged this rather serious play in the format of a constant laugh. The overall play was entertaining and the humor was just as funny as they (and likely Shakespeare) intended, but the more dramatic parts which are so iconic to Twelfth Night were drowned in the merriment.

This production was billed and staged as a much larger production than Much Ado About Nothing which was going on the same day in the smaller theater. Twelfth Night was played on the Festival Stage at the Alabama Shakespeare Festival which is almost twice the seating capacity of the Octagon at just under 400 seats. While definitely giving the impression of being more grand than Much Ado, and I acknowledge the need to highlight their juxtaposition here is strictly because I saw them on the same day within hours of each other, but this production of Twelfth Night pales in comparison to Much Ado About Nothing, despite it’s substantial excess in sets, design, and costume.

Perhaps it is Greta Lambert’s skill at staging on the small, intimate scale of the Octagon that makes coming to the Festival stage with it’s proscenium arch and stadium seating (decidedly at odds with the format of The Globe or the Octagon) which makes this production not quite measure up. Truth be told, the presentation was exciting with a few very notable performances, but overall I felt this production missed the mark.

The storyline is that Viola and her brother, Sebastian are separated at sea during a storm. Viola is washed ashore of a foreign country, where she is forced by her cousin’s grief-stricken seclusion to enter the service of the governing Duke Orsino in order to secure assistance for finding her lost brother, whom she alone holds out hope might still be living. Unable to enter the Duke’s service as a woman, Viola assumes the costume and attributes of a boy and becomes the servant of Duke Orsino where she is asked to woo the fair Olivia on behalf of Duke Orsino, falling in love with him herself in the process. Unable to admit to her love due to her assumed station, the result is a powerful tale of unrequited love housed in the themes of identity, malice, hope, and family.

The play opens with an impressive technical staging of the shipwreck scene with ballet like choreography of the characters being tossed about in the storm. It was very strict movements on stage with the audience at no point being under any allusions that the characters might actually be tossed about by this storm. This dance-like quality to the first scene stood in contrast to the other more physical and slap-stick type comedy of the rest of the play.

The sets and technical design of the shipwreck scene was well done, and took full advantage of the stage. However, that was the only scene that was done so elaborately, which felt disjointed from the rest of the production.

Duke Orsino (Charles Pasternak) was distractingly attractive on stage, earning gasps and even whistles from the audience when he first appeared. With such an entrance, it was difficult to take his character seriously, as his role demands, for the rest of the play. His costume was sultry, open in the front, and his pants were like that of Aladdin or some other Middle East character. Set on the fictional island of Illyria, an ancient name for the Adriatic Coast (modern parts of Croatia, Montenegro, Serbia, Slovenia, Bosnia, and Albania), the décor they chose for this character and his house were decidedly bohemian in all aspects.

Most impressive about his character was his ability to convey complicated emotions in his face that were visible and impactful from the audience. Normally, from so far away it’s hard to follow a character’s facial movements, but Pasternak has the conflicted and brooding role absolutely nailed.

While his performance was very talented, and well done, he gives the impression much more of a rich and jaded rock star than a Duke governing a country. I was disappointed that Duke Orsino’s character was played as this young man forced into a leadership role he wasn’t perhaps truly ready to hold instead of a highly respected leader legitimately wooing his love through his page.

The roles of Viola and Olivia are often lauded as strong female leads in Shakespeare’s plays but unfortunately that reality did not translate to the Festival stage at ASF. The actors playing Viola (Marina Shay) and Olivia (Ginneh Thomas) were not suited to their parts. Strong actors with great projection, their talents were misapplied in these roles.

Instead of a strong, confident, woman fighting for her brother’s life in the service of the Duke and accidentally falling in love in the process (much to her own and the Duke’s surprise which is the necessary foundation of the revelation scene towards the end of the play), in this staging we have a weak and confused little girl unable to handle the strength of the emotions in which she’s dealing—up to and including the point that much is made of Cesario/Viola being unable to lift a sword in her own defense. The weaker sex angle was overplayed. The effect is awkward and not at all the strong example of the power of a woman that this role was designed to be.

Instead of increasingly becoming suspicious that his page might be a woman in disguise and then gradually falling in love with her throughout the play, the Duke is an irresponsible and love sick young man falling in love with the young boy he never suspects is anything but a boy all the way to the point of passionately defending his love for Cesario before randomly deciding it’s cool with him when his page turns out to be a woman. The bisexuality and gender fluidity angle was an over application of a modern worldview on homoeroticism that’s outright inapplicable to Shakespeare’s time period and constitutes a valuable perspective on his works, but definitely one more fitting for a literary paper than a staging of this play.

Lambert’s strengths at redaction showcased in Much Ado fail her here in Twelfth Night by removing necessary setup and emotion from the characters causing them to derail into substandard portrayals of the strength they could have been.

Maria (Toni DiBuono) upstages the character of Olivia (Ginneh Thomas). Strongly seizing the role of primary woman in the play, Maria steals the show from her first moments on stage and never lets go. Despite sinking over the course of the plot into malicious, vindictive, and even childish bullying alongside her compatriots of Sir Toby Belch (Timothy Carter) and Fabian (Collin Purcell), you cannot help but love her. Even as a supporting character, and a servant, DiBuono’s portrayal of Maria is deserving of an award. She is strong, defiant, and breathes absolute life into this character. You get the impression throughout the play that she is the ring leader of the nasty pack of villains and you love to hate her.

Sir Toby Belch was impressively played by Timothy Carter. Totally transformed by make up and costume Carter was unrecognizable in costume playing Sir Toby Belch. His portrayal of the character, while occasionally coarse, came across as an older man who drinks in excess but once upon time was a classy man; despite his gross inclinations. The nasty, low-life, dripping-with-mire,  aspect of Sir Toby Belch’s character is all but lost in Carter’s portrayal of this character because of the natural class Timothy Carter brings to the stage. As a result, while well played (and his voice is incredible!), Toby Belch misses the mark slightly by simply being more respectable than he deserves.

Collin Purcell once again delivers an absolutely delightful performance in the comedic role of Fabian. Competing at times for the comic relief alongside Feste, Purcell is masterful at standing out when his character needs it and stepping back in order to highlight another character on stage for the sake of the story as a whole. He is comfortable on stage, knows his part, and plays it masterfully. He is a delight to watch and has comedic control and execution, which is truly skilled. His real strength shows through in his execution of the physical comedy scenes, particularly the one Greta Lambert stages beautifully in Malvolio’s letter reading scene.

Overall, the comedy genre of Twelfth Night was overdone, turning the entire production into non-stop laughs. This approach is admittedly funny, but drowns roles like Malvolio and makes his tragic demand for justice for the wrongs done against him seem out of place. Turning Twelfth Night into a straight-comedy this way also devours any opportunity to draw the audience into the drama and depth of the play.

The power of Viola and Olivia are entirely squandered, leaving in it’s comedic wake a set of weak whiny women chasing lovers, overshadowed by the strength of the villain. This comedic overpowering of the serious themes in Shakespeare’s Twelfth Night are exactly the same effect as we saw in Much Ado when the Watchmen and Dogberry were swallowed up by the comedy surrounding them. Here again, Lambert seems to include Malvolio, like Dogberry, out of necessity rather than as a true part of the production. Redacting Shakespeare is a complicated business, but where it worked for her in Much Ado, it falls short in Twelfth Night, leaving much to be desired.

That impact is a shame to see, since deep characters like the one played by Jay Russell was nothing short of truly impressive. His nuanced portrayal of a very complicated character with ample opportunity to draw the audience into a much more sophisticated story went highly noted but disappointingly underutilized.

While I don’t think you missed anything significant if you did not catch this production of Twelfth Night, I do encourage you to keep an eye out for other Shakespeare plays done at ASF. Even when they miss the mark on technical details like this one, the experience is worth the ticket. The Alabama Shakespeare Festival is located at 1 Festival Drive Montgomery, AL 36117. For tickets call 334.271.5353 or visit their website at www.asf.net

Do you like Shakespeare theater and want to see more? Join That Shakespeare Girl Newsletter!

Each Monday I send great Shakespeare content like theater reviews, expert interviews, resources, guides, and more to help you study the real history of William Shakespeare. 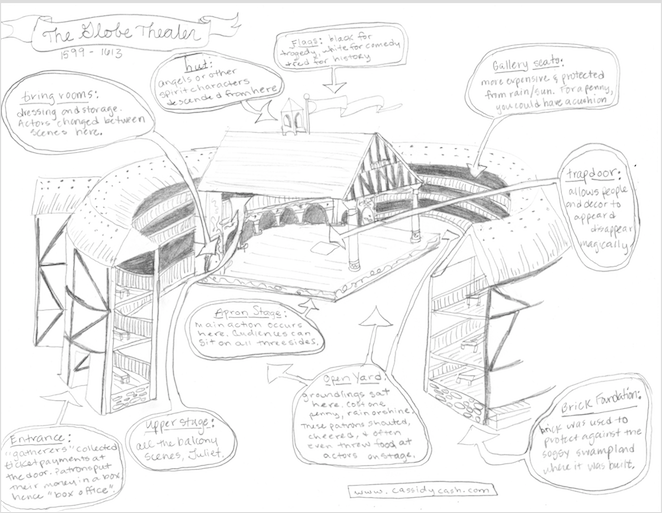 Unsubscribe at any time and keep this diagram of The Globe Theater as my gift to you!