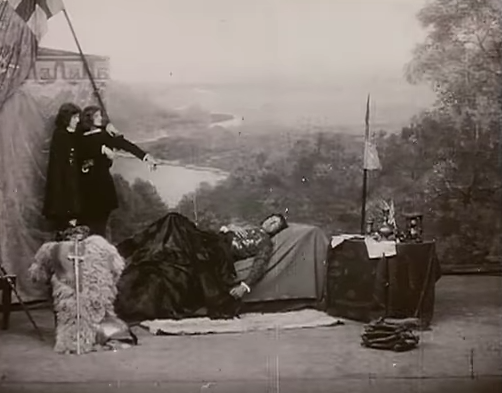 A production done on stage by Dr. Martin Parker at the University of Bahrain

Richard III done by the Actors Ensemble at Berkley

In this live version of the play Richard III, the director took creative license and had the lead actor play the role of Richard III with script in hand.

Benedict Cumberbatch reads at Richard III's reburial service in 2015 after the late monarch's skeleton was discovered beneath a parking lot. (carpark for the British)

BFI
The climactic scenes from the earliest surviving British film version of Shakespeare's Richard III, accompanied by a specially commissioned score by Laura Rossi. The film presents highlights from a stage version performed in Stratford in 1910; lead actor Frank Benson had been playing Richard on stage since the 1880s.

This film is included on the BFI DVD Silent Shakespeare – http://filmstore.bfi.org.uk/acatalog/…

All titles on the BFI Films channel are preserved in the vast collections of the BFI National Archive.