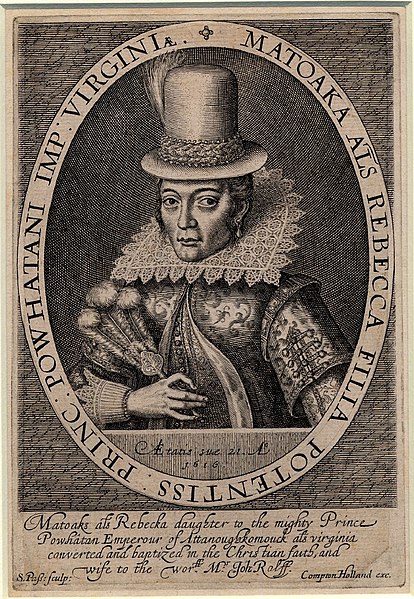 During Shakespeare’s lifetime, Britain’s colonies in the Americas were doing very poorly. England had very little infrastructure in place to make sure necessary supplies were arriving regularly, and in addition to not sending enough food or supplies for shelter, they continued to send shiploads of settlers to the New World and many of the colonists rather constantly reported back to England that the situation was dire. In order to bolster support more directly, Pocahontas, assuming her married name of Rebecca Rolfe, went with her husband to England in 1616, just two months after Shakespeare died, arriving in June of 1616.

This week we are exploring the life of Pocahonatas and exactly how much Shakespeare knew about her by asking Did Shakespeare Know Pocahontas?

Received as an ambassador and given the welcome fitting of the leader of a foreign nation, Pocahontas and John Rolfe were welomed at court in England and treated to all the trimmings of an official state visit, including entertainment at Whithall Palace with a theater production said to have even incorpirated Pocahontas into the production, staged by Ben Jonson.

With such an elaborate welcome, it is clear England’s royal court knew of Pocohantas, and John Rolfe was a high ranking official.

Rolfe was a successful tobacco farmer near Jamestown, Virginia, the first permanent English settlement in North America. Pocahontas was born around 1596, a daughter of Powhatan, chief of the Algonquian-speaking tribes and overlord of the vast Chesapeake lands. Powhatan played fast and loose with the settlers who, inexperienced and increasingly desperate, courted trouble. They had been sent by the Virginia Company, set up by charter from James I, to find a suitable site for settlement. In May 1607, 104 men and boys arrived on three ships under the command of Christopher Newport. Other notables included John Smith and George Percy, son of the 8th Earl of Northumberland. 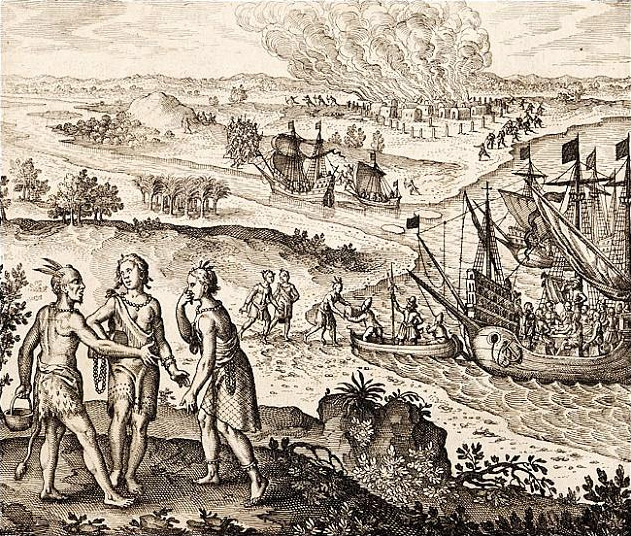 John Smith was captured by Powhatan and thought he would be killed but Pocahontas saved his life, crediting her with having ‘preserv[ed] the Colonie from death, famine and utter confusion’. Years later, when Pocahontas travelled to England, John Smith would write an official ltter to Queen Anne, wife of James I, to request Pochantas be received wlel and treated respectfully by the royal court. It seems to have had an impact, since they were received as foreign dignitaries and treated to a grand celebration.

It was Pocahontas’ husband, John Rolfe who was on the ship Sea Venture, which is 1 of 9 sailing vessles with which John Smith set out from England with to go to the newly created Virginia colony. That ship was caught in a violent storm and wrecked off of Bermuda. It is thought that the records of Bermuda and Bahamas are conflated by Shakespeare, mixed in with stories of Native Americans, when he wrote about Caliban and the shipwreck in The Tempest.

After Smith returned to England as a result of a gunpowder injury, Anglo-Indian relations deteriorated into war. Sir Thomas Dale would be established as the new governor of the Roanoke Colony, and he established a new city called Henrico on the sight where Rolfe began his tobacco farm. At the time, Pocahontas, was being held hostage by the English to encourage peace negotiations with her father. As a hostage, she was living at the chaplain’s house, being given clothes, food, and an education. She adopted many of the English customs and behavior’s while living there, and converted to Christianity. 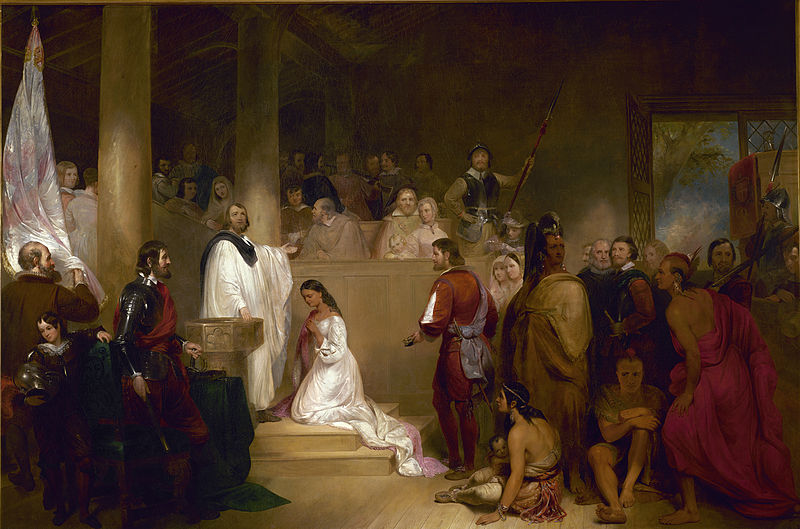 John Gadsby Chapman depicts Pocahontas, wearing white, being baptized Rebecca by Anglican minister Alexander Whiteaker in Jamestown, Virginia; this event is believed to have taken place in 1613 or 1614. She kneels, surrounded by family members and colonists. Her brother Nantequaus turns away from the ceremony. The baptism took place before her marriage to Englishman John Rolfe, who stands behind her. Their union is said to be the first recorded marriage between a European and a Native American.

By 1614, John Rolfe wanted to marry Pocahontas and solicited the govenor by letter, interested in securing peace between the English and the Powhatan nation through marriage. Also hoping to bring about peace, Thomas Dale approved of the marriage. After she was baptised, Pocahontas was given the name Rebecca, and she and John ROlfe married at Jamestown in April of 1614.

The marriage served as a peace treaty between the two nations and was welcome news in England. Economically, the Virginia Company needed investors and the constant wars were a huge deterrent. Such peace was expected to bolster support and confidence in the Virginia company, which deperately needed money. Thomas Dale encouraged the Rolfe’s to visit England as official representatives of the Powhatan nation, and as the daughter of their chief would be received in London society at the same level as a princess of a European nation, with the leverage to encourage further investment in the colonies. 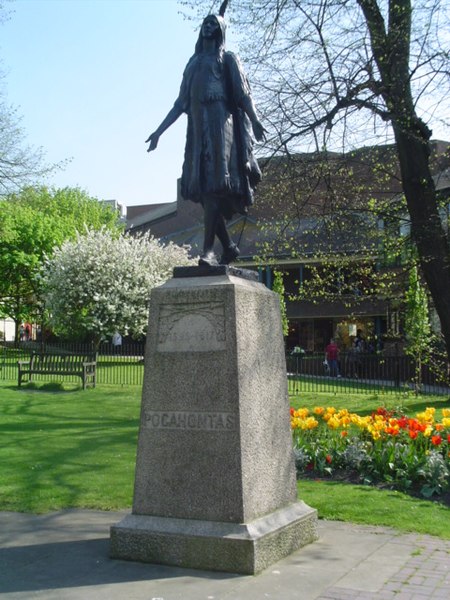 IMAGE: The citation beneath this image says “The Body of Pocahontas is laid to rest under this statue.” However, you have significant reason to doubt that citation. Pocahontas died in England and was buried at St. George's church in Gravesend. Her precise burial location is unknown because the church was rebuilt. So while this statue does stand there to commemorate her life, and as a memorial for her similar to a gravestone, it is not known (and possibly unlikely) that she is really buried beneath it. Source

John and Rebecca Rolfe gave birth to their son Thomas in 1615, and in May of the following year arrived in Plymouth England, and is thought to have stayed at La Belle Sauvage Inn in Ludgate hill. Records indicate they were treated as  the “Daughter of a king” and “respected persons of honor.”

The London air apparently caused Pocahontas respiratory problems, and as a result, they relocated to an estate outside the city owned by George Percy. John Smith wrote “Smith wrote: ‘[H]earing shee was at Branford [Brentford] with divers of my friends, I went to see her’. The meeting is said to have been very hard on Pocahontas because until that moment she had thought he was dead.

In March of 1617, John Rolfe had to return to the Virginia colony in his official capacity there. Pocahontas was strongly opposed to returning and wanted to remain in England. Rolfe refused her request and insisted they return, but Pocahontas would remain in England under tragic circumstances, since she would die of what is believed to be tuberculosis on March 21 of 1617 and be buried in England. Her son Thomas was very young and Rolfe feared for the child returning to what was such an unruly place, so left Thomas to be raised in England. John Rolfe would die in the Virginia colony in 1622, and Pocahonatas’ son Thomas would grow up in England and then return to Virginia on his own in his adulthood where he was married and raised children.

Join the newsletter using the form below, and I will send you a free, printable copy of Juan de la Cosa's World Map, that he created while on Columbus' famous 1492 voyage to Cuba. This map helped writers like Shakespeare understand the world as they wrote about far away islands in the ocean. This map features notes and history about the world in 1500. 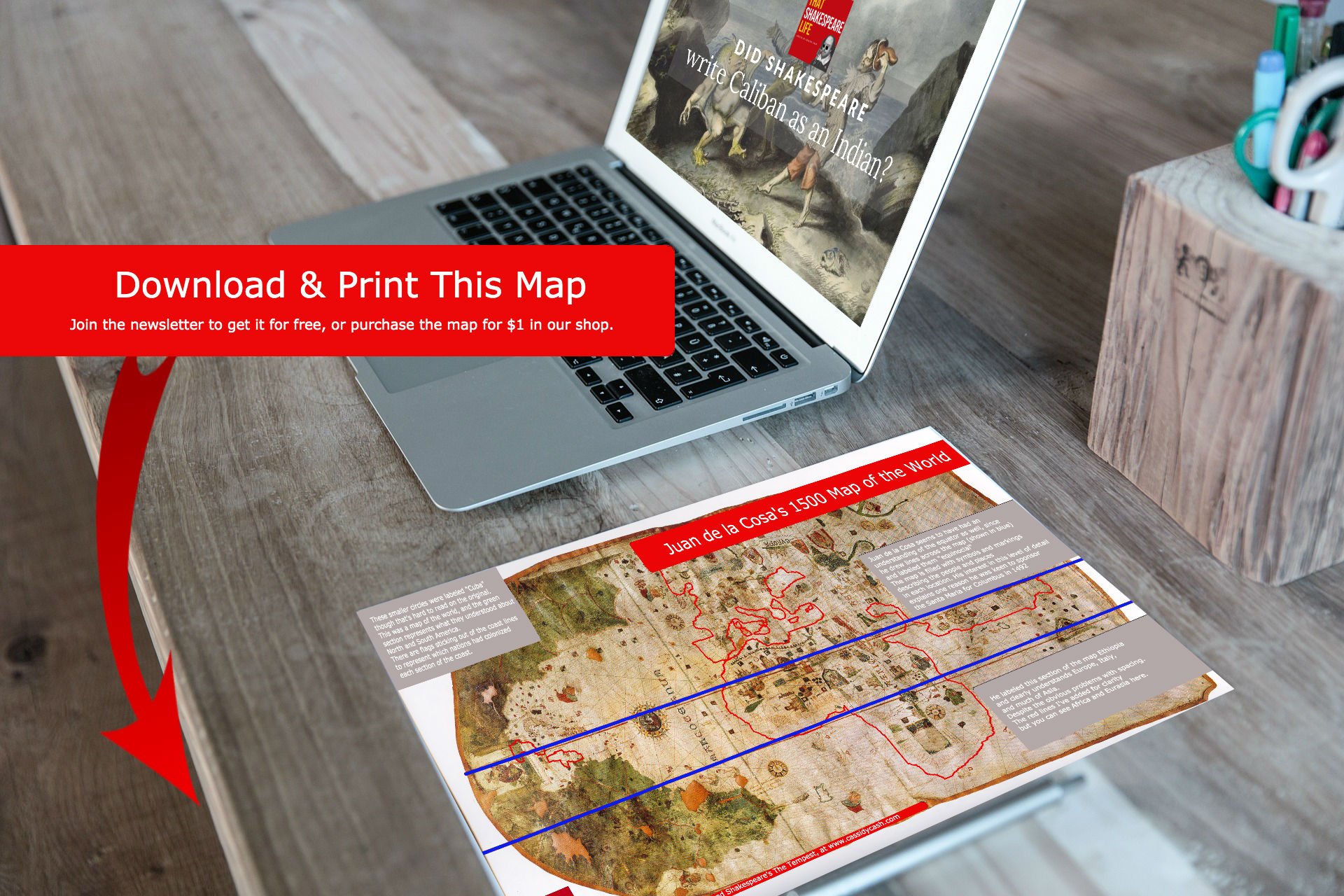 Episode #30: Malcolm Hebron Introduces us to Shakespeare's Magus
Episode 29: The Science of Shakespeare with Dan Falk