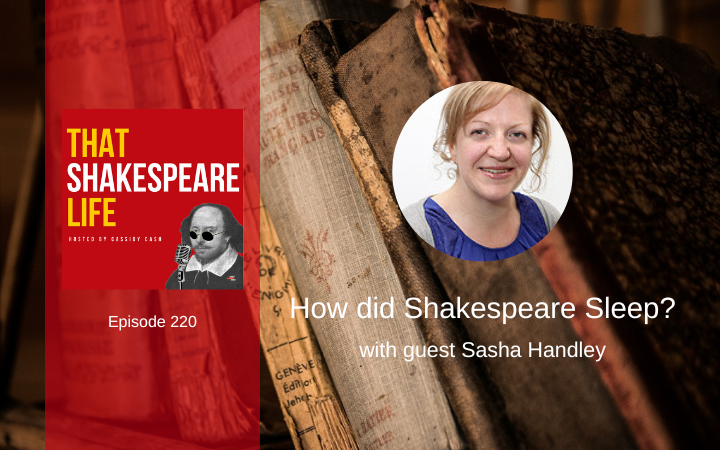 Welcome to Episode 220 of That Shakespeare Life, the podcast that goes behind the curtain and into the real life and history of William Shakespeare.

Sleep is mentioned in Shakespeare’s plays over 380 times, and the word bed over 540 times! His works mentions Truckle beds, as well as the famous Great Bed of Ware, but when it comes to the bard himself, what did he sleep on? Here this week to help us explore beds in Tudor England as well as pajamas, bedtime rituals, and the materials used to make bed sheets is our guest and author of Sleep in Early Modern England, Sasha Handley.

I’ll send you a notification when a new episode is available!

Professor Sasha Handley is a historian of early modern society and culture largely focused on the British Isles. Sasha published the monograph Sleep in Early Modern England (Yale University Press, 2016). Sasha’s current research includes Sleeping well in the early modern world: an environmental approach to the history of ‘sleep care’, funded by a Wellcome Trust Investigator Award and a Wellcome Trust Investigator Research Enrichment Award. The project will be the first to investigate the environmental context of early modern sleep practices in the British Isles and early America. Material methodologies (archaeology; microscopy) are key to the project’s success. Sasha’s work has been supported by the AHRC, British Academy, Wellcome Trust, and the ESRC. Her international research fellowships include the Folger Shakespeare Library, the Lewis Walpole Library, the Moore Institute (NUI Galway), the Victoria & Albert Museum, McGill University, and The Institute of Historical Research.

Places to connect with Sasha Handley

I’ll be asking Sasha Handley about:

A great place to start is the website Shakespeare in 100 Objects, excellent beds, warming pans, bed staves, embroidered textiles, etc. Great feeling of what sleeping chambers would have looked like.

The Great bed of Ware, V&A Museum, one of the few Elizabethan beds that has survived, and it’s incredibly huge.

Tudor Sleep Habits About Styles of Beds to Sleep in

I think for many of us, we assume that people in the Tudor era would have slept in a bed, but that might be taking modern sleeping arrangements for granted. Sasha talks about how there were several kinds of beds during the 16th century, with great variation on types of bedding depending on what your status was in 16-17th century England.

Laborers, for example, may not have had a bed, or even a bedroom, at all, and instead could have slept on piles of straw, or even on the floor if they were servants in a larger household.

To save space, sometimes beds were equipped with extra mattresses or sleeping arrangments underneath the bed frame itself. Today, we call this apparatus a trundle bed (at least that’s what it is called here in the US), but for Shakespeare’s lifetime, it was called a “truckle bed” which is a term Shakespeare uses twice in his plays.

“There’s his chamber, his house, his castle, his standing-bed and truckle-bed”

When asking Sasha about the types of beds that Shakespeare and his contemporaries would have known or used, she shares that by the 16-17th century, sleeping on actual bed frames was widely common.

The answer varies widely, according to social status, but it was becoming increasingly common in the 160-17th century for people to sleep on some kind of wooden bed frame. There are some big distinctions. The higher elevated and further away from the floor represented higher status. Nice decorative features and ornate carvings also distinguished your bed according to status. The textiles also made a statement. A huge range, silk velvet curtains and extravagant finials and multiple mattresses, or something like a truckle bed–hidden during the daytime, simple mattress stuffed with cheap materials like straw or flock, and it is portable, can be moved around. Low to the ground, set on wheels, and can be placed beneath a larger bed. Truckle as a verb means to bow down to someone of higher status.

At Shakespeare’s Birthplace, in Stratford Upon Avon, there are beds in place inside the house, set up the way it would have been for Shakespeare’s lifetime. The first time I went there, I was surprised to discover that not all the beds had canopies on them.

These pictures were taken by me, Cassidy Cash, on my trip to Shakespeare’s Birthplace in 2018. All three of these beds were displayed inside Shakespeare’s Birthplace. Of the two with a large overhead frame, one has a canopy and drapes, while the other does not. The third bed I saw there was quite small and displayed without any canopy or overhead woodwork of any kind. At the time, I believed it to be a bed for a child, because it was quite a bit smaller than the others in the home. All these images are my own.

I had just assumed from all the woodcuts of pregnant women laying in bed, being visited by a midwife, that canopy beds were the norm for keeping off bird mess or what have you that may have been up in the rafters of the home.

However, several of the beds in Shakespeare’s home look just like we have today, albeit significantly smaller.. They look very much like twin or double beds we have today, with thinner mattresses. Sasha describes what did a typical bed in a house looked like for Shakespeare and whether or not they were made to accommodate multiple-people to a bed:

A typical bed for someone like John Shakespeare would have been like a 4 poster bed (could have had a canopy or not, whether you could afford to do that). They wouldn’t have had elaborate carvings, just a plain bed frame, and while simple, it would have cost around a quarter of John Shakespeare’s annual wages (estimating 40lbs/year, it would have bene about 10 pounds). In terms of typical household contents, the bed was about ⅓ of their entire household value. Specialized sleeping places, that we call bedrooms, was beginning to be a new concept. It was generally the master and his wife that enjoyed a specific sleeping place, so if a bed is placed in a multifunctional place of the household, needed a canopy to create privacy. Children often shared beds with people of the same status and age and gender sleeping in a multifunctional part of the house rather than in a separate space. Bed types depended on status in the household.

Sleep with a mattresses stuffed with straw

In addition to straw, Sasha shares that herbs, along with paper, could have been used to stuff mattresses for sleeping. In the case of herbs, specific herbs would have been selected for their fragrance or for their medicinal benefits to the person sleeping on them.

For those that could afford it, you could have expensive feathers like duck and goose feathers, or sometimes otters feathers being used in mattresses, which are very warm and soft. That type of mattress would be the one directly below the sleeper’s body. If you have money, you don’t have one mattress, you have several that are stacked on top of each other. You had lower mattresses that sat on a corded rope system at the base of the bed, and the lower mattresses were stiffer/sturdier like horsehair, and the one closer to your body would be filled with the animal feathers so it was softer. There was a lively debate on that kind of mattress because it could illicit unwelcome sensual thoughts or that it would overheat the body, so it wasn’t prized by everyone. Lower down the scale there was straw, which was common for agricultural workers that slept outside, and some kind of tufts of wool or cotton fiber, and even paper mixed in with those materials were other lower fillings.

Sleep comes twice in one night for Shakespeare’s lifetime

We know that night caps, the hat worn by characters like Ebeneezer Scrooge in A Christmas Carol, for example, were decidedly an 18th century invention and after Shakespeare’s time, and I had suspected that the idea of a night cap would post date Shakespeare. To my surprise, and delight, I learned that nightcaps were a thing for Shakespeare’s lifetime, and it’s possible he even wore one himself.

Night clothes is a mystery, and there’s no equivalent term in Tudor times, so our best guess is that some people slept in simple cotton or linen shifts, or in their daytime shirts, many of which you could detach the collar and shirt from. There’s some evidence that people slept naked, and especially true in the summer months, but one item of clothing that was suggested was a night cap–not largely embroidered. Sits very fast to the head with ha little ribbon underneath to keep it in place during the night. There’s one in the V&A museum, and they were very typical. Household inventories and account books list items for the making and cleaning of these nightcaps, so they were regularly used. It takes us back to Tudor medical advice which stressed the need to keep the brain temperature stable during the night to avoid unbalancing the humors.