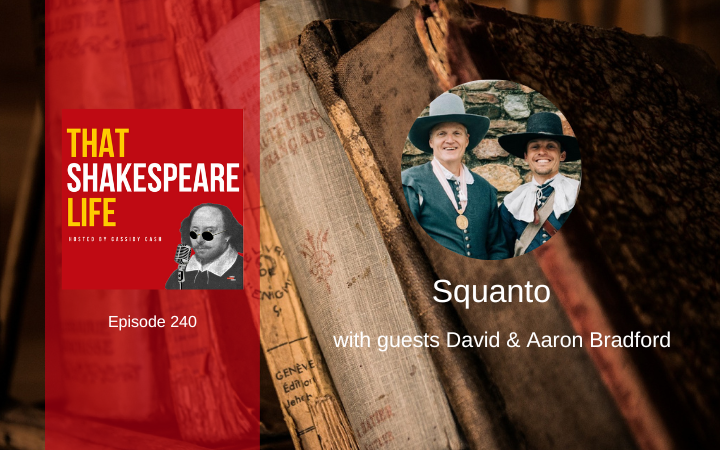 Our show is supported in part by listeners who sign up to be our patrons. You can get insider looks at the making of our show and contribute to future episodes when you sign up to be a patron here. Are you a Shakespeare Educator? Take this episode into your classroom with lesson plans, history guides, and hands on history activity kits that work like science labs for Shakespeare history. Become a member here.

One of the heroes of American history and the story of the survival of the English colonists at Plymouth in the mid 17th century is a man named Squanto. His given name was Tisquantum, but he came to be known as Squanto. He was a native American interpreter and guide for early English colonists. While little is known about his early life, some scholars believe that he was taken from home to England in 1605 by George Weymouth and returned to his native homeland with explorer John Smith in 1614–15. His almost decade long residence in London coincides with when Shakespeare was writing plays about shipwrecked colonists encountering native tribes on mysterious far away islands. Our friends, and previous guests to the show for Thanksgiving last year (see that episode here) are father and son history team, David and Aaron Bradford.

David is a 13th generation direct descendant of Plymouth Colony Governor William Bradford and a life member with the Society of Mayflower Descendants in the State of Delaware where he currently serves as Governor. Since 2013 in conjunction with American Liberty Tours of West Chester, PA, David has been portraying William Bradford and sharing Bradford’s account of Pilgrim history with senior centers, schools, and historical societies in DE and PA.

For the past 25 years, Aaron shared a love for history from the Era of Jamestown through the American Civil War at historic sites, educational venues, and in historical films. He is a Certified Interpretive Guide with the National Association of Interpretation, Interpretive Supervisor with Coastal Heritage Society, interpretive ranger at Colonial Wormsloe, and offers engaging tours and educational programs as Liberty Encounters in Savannah, Georgia, and beyond.

Beginning in 1990, David was founder of a quality management and behavior-based safety training and consulting firm before becoming the Quality & Safety Manager for the prime contractor at NASA’s Goddard Space Flight Center/Wallops Flight Facility on the Eastern Shore of Virginia. Over the years David has held leadership positions with various Quality, Safety, Home School and Historical organizations and for over 25 years has served as an Elder in the Bible Fellowship Church of Newark.

Aaron discovered a passion for history as a young child when he learned that he is a direct 14th generation descendant of Plymouth Colony Governor William Bradford.  For the past 25 years, Aaron shared a love for history from the Era of Jamestown through the American Civil War at historic sites, educational venues, and in historical films.  After earning a B.A. in History Education from the University of Delaware, Aaron served as an educator and historical interpreter at Pamplin Historical Park near Petersburg, Virginia.  He served as the Education Chair and is the Social Media Assistant for the Society of Mayflower Descendants in the State of Delaware.  He is a Certified Interpretive Guide with the National Association of Interpretation, Interpretive Supervisor with Coastal Heritage Society, interpretive ranger at Colonial Wormsloe, and offers engaging tours and educational programs as Liberty Encounters in Savannah, Georgia, and beyond.

David and Aaron Bradford are a father and son team. They are 13th and 14th generation descendants respectively of the Plymouth Colony governor William Bradford. They are the historians behind the forthcoming 1620 Experience.

I’ll be asking David and Aaron Bradford about:

Why just learn Shakespeare history, when you can Experience it?

Discover hands on history activities from the life of William Shakespeare that you can do at home or in your classroom.

These maps, some from the early 17th century, outline the tribal areas inhabited in the areas of New England where the Pilgrims first landed.

Scroll through the map or click on specific images to see them enlarged. Source links are included as well so you can see and download larger versions of the maps.