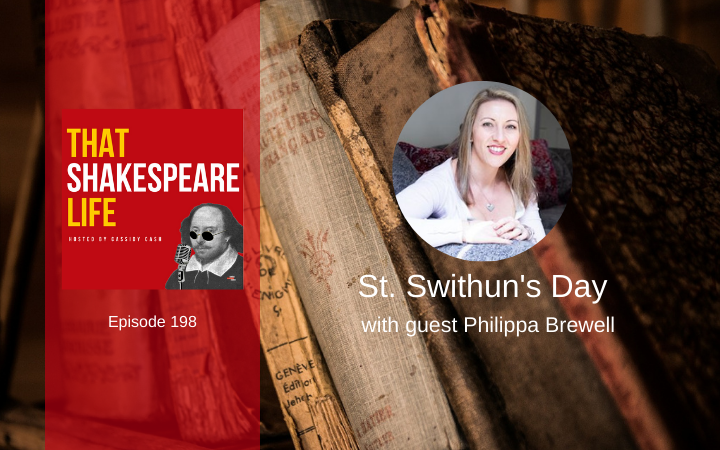 Welcome to Episode 198 of That Shakespeare Life, the podcast that goes behind the curtain and into the real life and history of William Shakespeare by interviewing the experts who know him best.

700 years before Shakespeare a man named Saint Swithun established his place in history mostly because of the miracles that surrounded his death and burial. St. Swithun would capture the imagination of writers for centuries after his death, with one of his most famous miracles being recorded in a book called Historia major from the 15th century. The early 13th century saw a shrine built to St. Swithun was not demolished until 1538, just 26 years before Shakespeare was born. This imposing figure on the English consciousness was celebrated during Shakespeare’s lifetime and continues to be celebrated today in England, every July 15.

In exploring the history of St. Swithun’s day, I discovered one man who was potentially named after the popular St. Swithun who is not only a contemporary to William Shakespeare, but would himself go on to be canonized in the 20th century by Pope Paul VI. Swithun Wells was a Roman catholic martyr during the life of Elizabeth I. His family was known to house and shelter catholic recusants during Shakespeare’s lifetime, with Swithun Wells was executed by Elizabeth I for housing catholics.

Here today to give us all these details about the holiday, how it was celebrated for Shakespeare, the history of the other Swithun from Shakespeare's lifetime, and even what science is behind how the holiday is celebrated today is expert in British History and our friend, Philippa Brewell. Join the conversation below.

Philippa Lacey Brewell lives in Central England and is well respected in her field as a history writer, presenter and tour guide. She engages audiences with virtual tours and history holidays. She is the owner and founder of British History Tours, a tour company for those who love British History. Philippa entertains thousands each week with her videos and stories from across the UK and British History on her YouTube channel, ‘British History'. This ability to engage an audience, as well as being an expert in travelling the historical sites of the UK, makes her the perfect tour manager.Her aim is to provide once in a lifetime experiences but which you'll want to repeat! She began writing and speaking about travelling through Britain’s history in 2012 and hasn’t stopped since and now also runs the ‘British History' club on Patreon.She also presents a weekly You Tube show called “This week in British History” and has written numerous history blogs as well as writing for BBC History Magazine, CityJet and FlyBe inflight magazines and for Tudor Life Magazine. You can also catch her over at The Tudor Society where members enjoy her ‘Roving Reporter' reports from Tudor sites across the UK.

In this episode, I’ll be asking Philippa Brewell about :