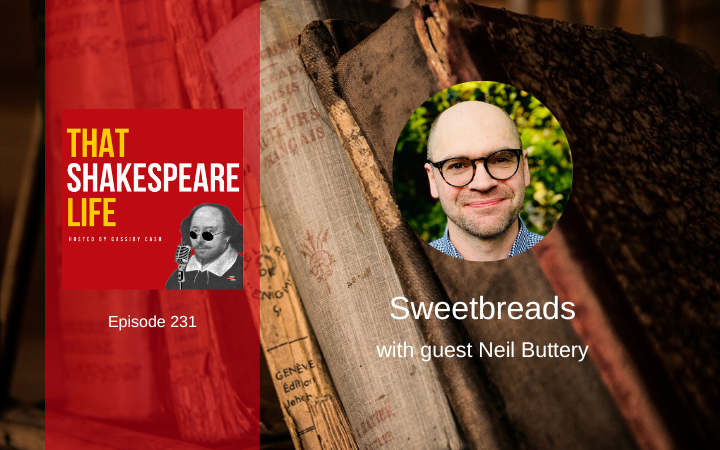 When I’m not recording That Shakespeare Life, I’m usually researching for DIY History, my YouTube channel where I look into games, recipes, and crafts for Shakespeare’s lifetime that you can do at home. In preparing a new episode, I was going through Hugh Plat’s Good Housewives Jewel, a cookbook that was written in 1596-1597. One recipe that caught my eye called for “sweet bread.” I ambitiously decided to try and make this recipe, thinking I would be diving into a cake, or perhaps some version of loaf bread. However, as I started to research the ingredients, I was surprised to discover this “sweet bread” wasn’t bread at all but instead “sweet bread” was actually the 16th century phrase for the pancreas of a cow. Discovering that sweet bread was not at all a bread, but instead an organ meat, was the moment I decided we definitely needed to know more about this surprising food, and to do that, we needed to bring in an expert, which is why I reached out to our friend and returning guest to That Shakespeare Life,  expert food historian, Neil Buttery,Neil joins us today to share the history and a few recipes for how to cook 16th century sweet bread.

Neil Buttery is a food historian, chef, author, blogger, podcaster and scientist, who has been obsessed with historical and traditional British food since he began writing his food blogs in 2007 in an effort to improve his writing for his PhD in ecology & evolutionary biology. Ecology lost out in the end, eventually leaving science to pursue a career in food, first holding regular pop-up restaurant events, then a real restaurant. These days, however, he is kept busy writing about and studying (and eating!) food history for his books, and popular blogs and podcast. He has a particular love of offal and puddings. Neil’s latest book, a Dark History of Sugar, is out now and available wherever books are sold. We’ll include direct links to Neil’s work and his latest book in the show notes for today’s episode.

I’ll be asking Neil Buttery about:

There’s some debate among historians about the origin of the term “sweetbreads” but there’s agreement that the word represents what’s called in culinary circles as “offal”, or organ meat. What kind of offal was used in a recipe that called for “sweetbreads” often depended on the decision of the person doing the cooking.

As Neil explains in today’s episode, sweetbreads could be the thymus gland or the pancreas of any animal, but in the 16th century it was almost always either a cow or a lamb.

Sweetbreads in the 16th Century

Sweetbreads were most popular in the late Spring and early Summer around the same time that animals were slaughtered for their meat.

Associated with late spring/early summer, that’s when male lambs or calves are slaughtered. You never ate your females because they gave milk and cheese, so people ate the males, and you were going to need to keep a few to breed, so what you had was too many males running around and they were culled late Spring/Early summer and then there were sweet breads everywhere. That’s a peak time, and during that time, everyone ate them, and it was very much associated with sheep and cattle farmers. When they were trickling in the rest of the year, it’s difficult to get and now it’s associated with upper class.

It wasn’t impossible to find sweetbreads at other times of year, but you had to shop around. Some people “could go down to the shambles, the butcher’s quarters who might have some available.” But for the majority of people, sweetbreads were eaten when they were in season. As Neil points out, they were also uses primarily as a garnish to other meats rather than as the primary meat for a meal.

How to Cook Sweetbreads

Neil’s research into sweetbreads shows that they needed to be prepared from a young animal. If you tried to eat the offal of an older animal the meat would be tough.

Neil explains that the sweetbreads first have to be prepared for cooking.

Offal is collected just after slaughter and you can’t mature the organs the way you do other cuts of meat.

Soak it in salty water to remove any blood. The water goes a little bit cloudy. You poach them in a quart (spelling?) Salty water, can add onions, leeks, lemon juice, parsley stalks, and even some white wine, you pop it in the water for 2-3 minutes, and bring it out and now it’s spongy and a little rubbery.

Remove any tissue, and then sometimes people press it under a light weight, and then it’s ready to cook.

They are usually tossed in butter, flour, breadcrumbs and fried in butter.

Traditional recipe of cooking with bacon, take the bacon out and fry the sweetbreads in there, add some fresh peas, or broad.

See other recipes for sweet bread inside this cookbook. “Robert May’s 1660 book The Accomplisht Cook. He uses sweetbreads in loads of his recipes, so if anyone wants to see more about how they were used in kitchen at the time, that’s a great place to look:” – from Neil Buttery, shared on Twitter about this episode. Join us on Twitter to talk with guests and me about our episodes.