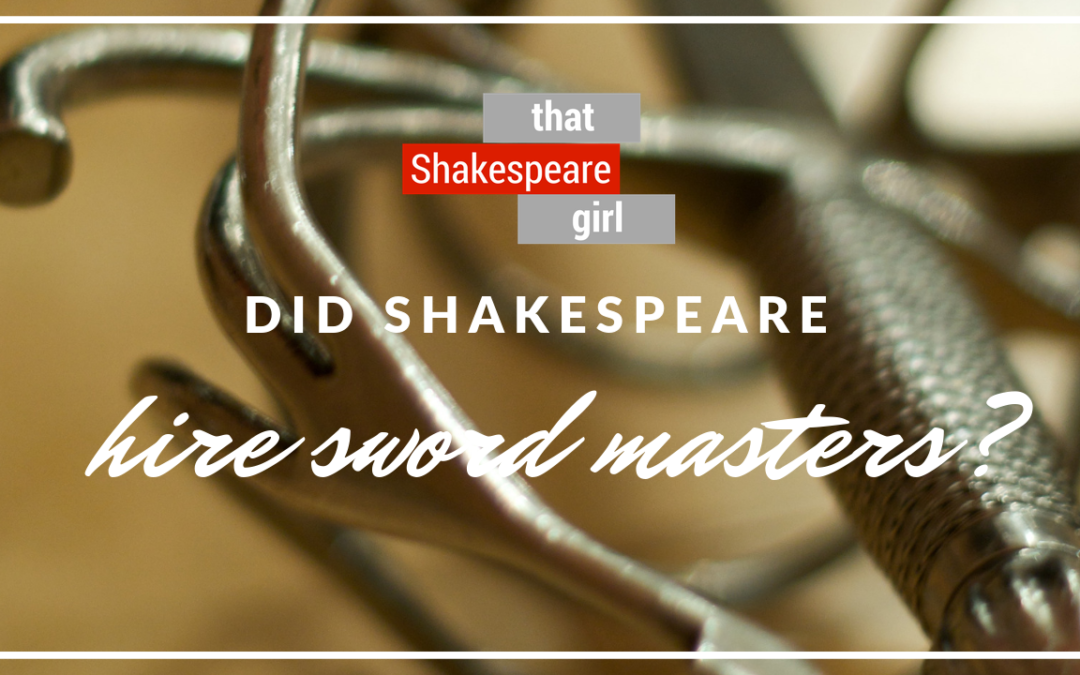 In Shakespeare’s England, swords were a common element of basic dress, both for protection of the wearer who might at any time find himself challenged to a duel or need to defend himself against an attack, but also because a sword was part of the costume or daily outfit for Elizabethans, including Shakespeare.This element of history is important when considering theater performances, because just like an actor who might walk on stage not wearing would draw our attention because it’s not what we expect, understanding what Elizabethan audiences would expect to see in a specific character tells us something about the significance of what Shakespeare included or left out. When it comes to props and costumes, Shakespeare’s audience was very familiar with swords, their use, and their application in battle. Which means, when he staged his fights or presentation of swords on the stage Shakespeare had to get it right.

So what did he do to get it right? Find out this week as we’re asking: Did Shakespeare Hire Sword Masters?

A Sword Master was someone who was fluent and an expert in the latest fighting styles and capable of training an actor or someone who wanted to use a sword in the right way to do that. There were many fencing masters operating in London during Shakespeare’s lifetime, many who were trained in the styles of Italian masters Agrippa, Thibault, Bonetti, and Capoferro, among others. You may remember these names from the famous sword fighting scene in The Princess Bride. 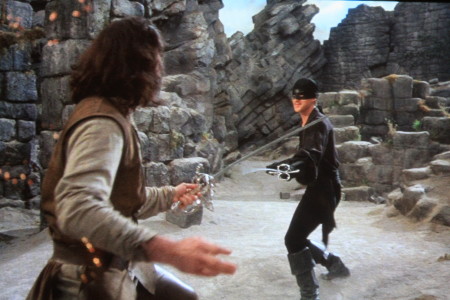 Duel Scene from The Princess Bride (1987)

Most of Shakespeare’s audiences would have had a detailed knowledge of fencing and what “real” fighting was supposed to look like on stage, so to continue the story and not distract by a fake looking fight, Shakespeare hired fencing masters to work on staff at the theater company and train his actors.

Rapier and Dagger Method by Cappoferro (From Australian Fencing Academy)

One of the books most like to have influenced Shakespeare is by George Silver, who wrote Paradoxes of Defense in 1599. HE worked to perfect Elizabethan martial arts, and as good fight skills were scene to be the defining mark of a real gentlemen, portraying a gentleman on stage meant the actor had to know how to fight.

In his book, Shakespeare and the Making of Theater, Stuart Hampton Reeds recounts a tale about George Silver where he challenged a group of Italian fencing masters to a battle in order to prove the superior prowess of the English over Italians in fencing. When he was telling the tale, George called it a challenge to “play with them” at fencing. Using the phrase play with them as opposed to fight with them suggests that Silver was very conscious of the theatrical nature of dueling and that the pre-scripted format he was suggesting was pure theater. In the end, the Italians refused to fight Silver and his brother, but it’s a great story to demonstrate the connection between theater and sword fighting. 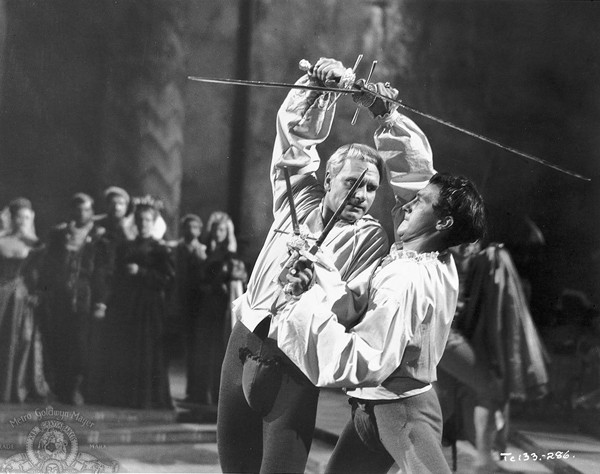 “Hamlet” with Laurence Olivier (1948) In this scene, Hamlet and Laertes duel with rapier and dagger, a method popular in 16th century England (but not 14th century Denmark when the play is set). The inclusion of this method is reflective of Shakespeare's attention to his audience's expectations.

In the episode with Fencing Master Joseph David Martinez (on episode 21 of That Shakespeare Life), he shared with us that Will Kempe, famous actor with Shakespeare who played Falstaff up until their personal falling out with one another, was hired with Shakespeare in part because of his ability to train actors in sword fighting. Shakespeare’s portrayals of sword fights were not always portrayed on stage successfully, as we see in when Ben Jonson criticizes Shakespeare for using “rusty swords” in his portrayal of the War of the Roses,  and Shakespeare is thought to have hidden a tongue in cheek apology for theater’s inability to display accurate violence on stage inside the text of Henry V:

And so our scene must to the battle fly;
Where—O for pity!—we shall much disgrace
With four or five most vile and ragged foils,
Right ill-disposed in brawl ridiculous,
The name of Agincourt. Yet sit and see,
Minding true things by what their mockeries be.

We can see that Shakespeare fully exploited the drama of fighting. He went beyond the text itself to portray marital arts on stage to enhance what was happening within the words and stories. The level of sophistication this required, and training for his actors that would be necessary to pull off such an endeavor, speaks to the high caliber nature of Shakespeare’s company, and his personal leadership of the theater.

So the answer to this week’s question is yes. Shakespeare did hire sword masters to work in the theater. Some of them were hired on as company members, like Kempe, and others would have been brought in for brief training forays before that master would leave and go off to train another company. Italian ad other European fencing masters arrived in England almost in droves to setup shops as educators in the art of fence, and William Shakespeare took full advantage of this opportunity available to him when performing fight scenes on stage for the success of theater.

That’s it for this week here at Did Shakespeare. I am Cassidy Cash, That Shakespeare Girl
I hope you learned something new about the bard.

The book about Shakespeare and the Making of Theater: https://books.google.com/books?id=dkR… T

If you enjoy stage combat training and want to learn more about the techniques and theatrical training Shakespeare used to do some of his fight scenes and special effects, you can join us September 16-23 in Stratford Upon Avon and London England where we will be spending 5 days walking in the footsteps of William Shakespeare. One specific tour (of several we are going to offer) is a behind the sense tour at the globe looking specifically at fights and s[special effects on stage. Experts form the globe theater will be giving our group a private tour, not available to the public, that looks at exactly what, and how, William Shakespeare would have staged realistic fights, costumes, and props for his Elizabethan audience. Early bird tickets go on sale for that later this month, so if you are interested in more information visit the link today’s show notes to find out more. (Remember you do have to sign up for that email list to get access to the early bird tickets.)

Walk in the Footsteps of William Shakespeare 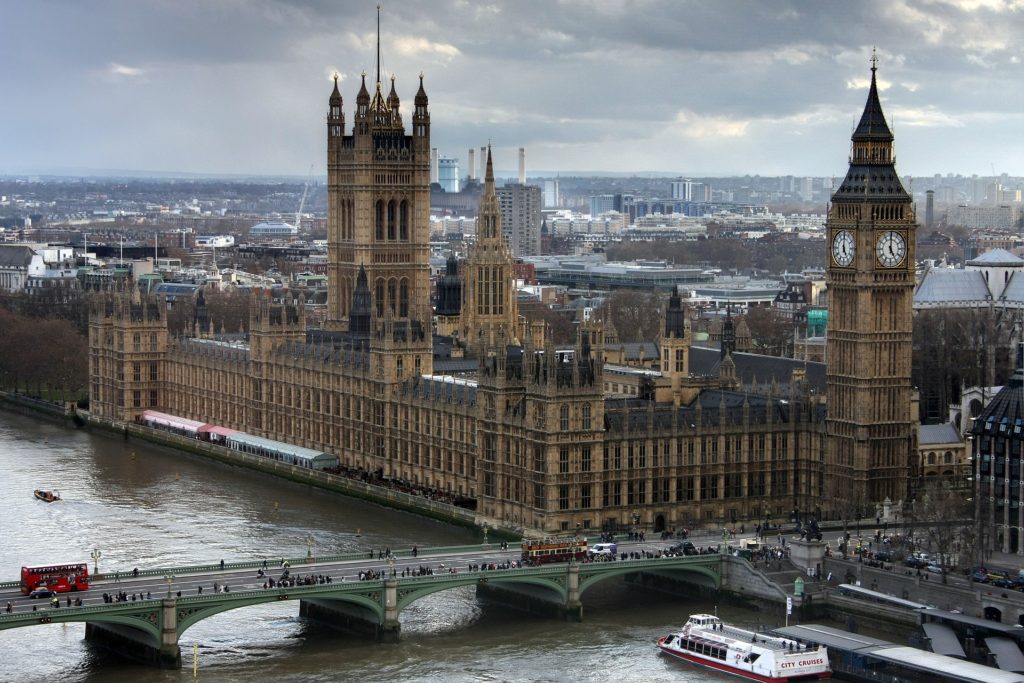 Products we mentioned in this blog post that are available for purchase on amazon. These are affiliate links.