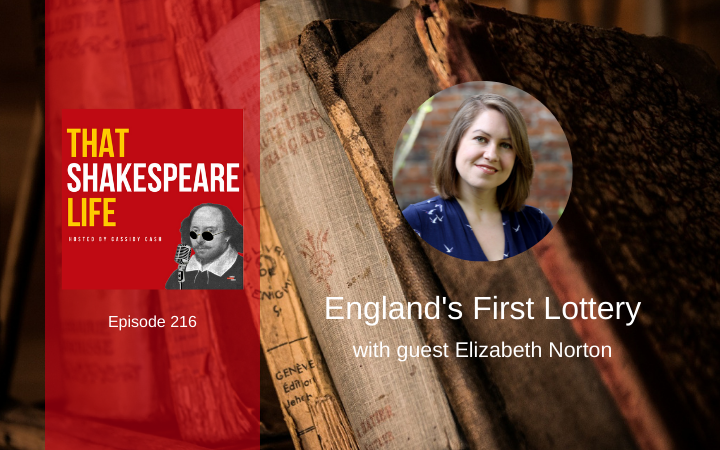 William Shakespeare uses the word “lottery” in his plays 8 times, often referring to a reward that comes after taking a gamble. While we may be familiar with lotteries like the Powerball or Publishing Clearinghouse here in the United States, a ticket based lottery where people could pay money for a chance to win big was brand new for England in Shakespeare’s lifetime. The first time England had seen a real lottery, was the first national lottery in 1567, instituted by Elizabeth I, when Shakespeare was just 3 years old. Here today to share with us how this lottery worked, who bought tickets, and who ultimately won it, is our guest, Elizabeth Norton.

Please subscribe to our show and leave us a rating & review.

Dr Elizabeth Norton is a British historian, specialising in the queens of England and the Tudor period. She has degrees from the Universities of Cambridge and Oxford, as well as a PhD from King’s College London, where she has taught History. She is the author of twelve non-fiction books, including the critically acclaimed ‘The Lives of Tudor Women’. She regularly appears on television as an expert. Recently, she acted as Historical Advisor and featured contributor on the BBC’s ‘The Boleyns, A Scandalous Family’.

In this episode, I’ll be asking Elizabeth Norton about:

Where available, affiliate links have been used in this section. Affiliate links to do not change the cost to you, the consumer, for any items you purchase but it does pay us a small commission.

Other books Cassidy thought you might enjoy or find relevant:

The History Press, UK, writes about the first English Lottery in their article “It Could Be Ye: England’s first lottery”

“…Till each man drop by lottery.”

The First English National Lottery Was Open to Everyone

The only catch about it being “open to all” was that the cost of a ticket was very high. It was 10 shillings to enter the lottery, an amount that would have equalled several weeks work for the average laborer. In addition to it being open to any class status, it was also open to anyone from any country–you didn’t need to be a citizen of England.

Elizabeth points out that,

“Anyone could enter, you didn’t have to be English. Anyone that wanted a ticket could buy a ticket, but there was a major barrier–it costs 10 shillings…50 pence was around three weeks labor for an average worker.”

It takes 12 pence to make a shilling, so 10 shillings is 120 pence, or almost 9 weeks worth of work at a laborer’s income. This meant that while officially, you could enter, the cost aimed the lottery at the middling class (Shakespeare’s class). Elizabeth explains that incentives came along with the entry as well. Apparently, you could avoid prison time by buying a ticket:

“It was aimed at the middle class, generally, not poorer levels of society, but if you thought you were about to be arrest for a crime, you could be exempt of arrest for 7 days (except murder or piracy)”

Makes you wonder if there were any false arrests or insinuated accusations made during this time to try and get people to buy their way out of a potentially sticky situation by purchasing a lottery ticket.

“Besides, the lottery of my destiny Bars me the right of voluntary choosing:”

The First English Lottery Was Drawn at St. Paul’s Cathedral

The first English National Lottery was received with a great deal of skepticism. The Queen had hoped to raise enough money to fund some of her government projects. Of course, taxation was the traditional route for raising that kind of money, but in this case the Queen opted for what she hoped would be a more well received fundraising effort. To the contrary, many people were skeptical about whether they would be able to receive the prizes offered as well as whether or not the Queen was using the money for personal gain.

To try and overcome the skepticism, the Queen offered a variety of incentives to try and encourage participation in the lottery. Elizabeth explains that many of the tactics used to advertise the lottery relied on the same methods you see for the lottery today: an appeal to your hope for the future.

Aspirational. The posters for the lottery, life changing prizes that it offers (ask her where to see these posters) Top prize was close to 1.2M dollars in today’s currency. The queen hoped that the list of these great prizes would be enough to draw people in but it was extremely skeptical, people weren’t convinced this would work. The Queen has to deny it’s a racket and she’s not pocketing the money, and it’s not well received at all. The draw is held two years after they offered it, and they only sold about a half.

When the final tally was counted, the lottery raised only a fraction of what the Queen had hoped this endeavor would be able to produce. Instead of the 100,000 pounds she was anticipating, the Queen’s lottery of 1573 only raised about 10,000.

“Contributing makes me feel like I’m being useful to the planet.”

The First English Lottery Was Overseen by William Cecil

The Queen was not purely nor personally inventive with the creation of the English National Lottery. While it was the first time England had held a lottery, the concept was far older than England. When the plan was launched, the people of England understood the concept and were not surprised by how it worked.

Although it’s the first English lottery, there are precedence that she’s drawing on. Ancient China has lotteries for the Great Wall, but in a European context, it’s built on dutch precedence in the Netherlands 15th C. They weren’t necessarily national, but local scale, but certainly the idea comes from there. France holds a lottery in 1539, Lottery Royal, not really a success. So there is an existing idea, and you see in the posters that she has displayed around the country, the posters aren’t explaining what it is, so we can tell the expectation that people knew what it was and how it worked.

When the Queen wanted to implement a national lottery, she turned to her trusted advisors. Elizabeth shares this week that it was most likely William Cecil who was in charge of taking the Queen’s idea and making it work.

Elizabeth explains that the Queen was not keeping the money for herself and remaining records of the lottery confirm that certain segments of society, including livery companies, were very supportive of the idea of a lottery.

William Cecil was almost certainly behind this. He’s the driving force. The total of the prizes matches the total tickets sold, so the queen isn’t pocketing this money. The livery companies were also very supportive.

We do not have a full list of exactly what was won by those that entered the lottery, but we do know that there were several tiers of prizes offered. In some instances, the Queen essentially emptied her cupboards and offered the nicest re-gifting you’ve ever seen. Items from the Royal Household were offered in lieu of cash, since the money which would have been available for cash prizes was not reached by the entries. When there wasn’t cash available to give as gifts, they gave away items of the Queen.

Elizabeth shares that while we do not know all of the prizes we do know a few, like a draper’s company that received a suit of armor.

Don’t have a full list of prizes, but there are a few records and scattered accounts, some draper’s companies seem to win some armour, but the prizes look really good on paper. The top prize is 5000 pounds, 30000 in cash and the remaining in  2000 made up from goods from the royal store. You try and sell this tapestry and linen cloth and plates if you want 5k in cash. The prizes go down in value from there, 3000 pounds, and then tiered downward from there. The value of the prizes was reduced when they didn’t sell enough tickets, so we know they reduced the tickets, but we don’t know who won it or what their ultimate prize was.

While I cannot say for sure which draper’s company won the armour (I would need to look at the specific record Elizabeth is mentioning here and I was unable to chase that down by the time I wrote this article), but I can tell you that the Shrewsbury Drapers grew to prominence at this time in history, so it could be them? Sorting that out will require more research. You can explore Shrewsbury further here and I’ll include some links to history of the Shrewsbury Drapers below if you want to chase this rabbit trail further.