The Moon with Rachel Aanstad (Ep 209) 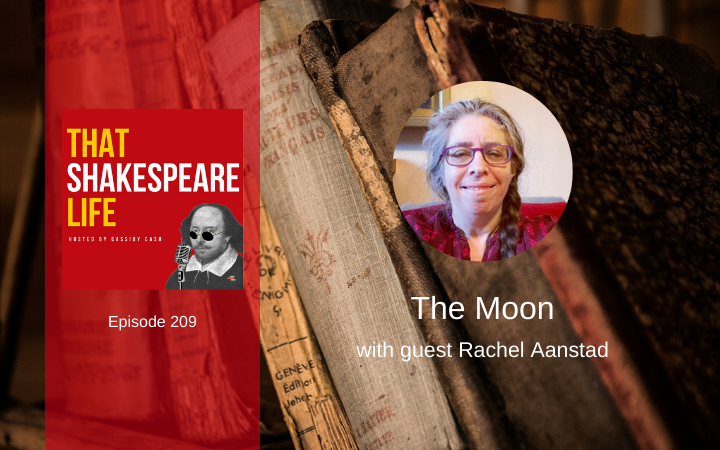 Welcome to Episode 209 of That Shakespeare Life, the podcast that takes you behind the curtain and into the real life and history of William Shakespeare.

The Moon is used by William Shakespeare over 160 times in his works, talking about the shape of the moon, the horns of the moon, and even traits of the moon like moonshine or moonbeam. For Shakespeare’s lifetime, the moon held almost as prominent a place in life as the sun, with people planning their lives around the phases of the moon.

Described using a variety of names including popular feminine names like Lucina, Diana, and Cynthia, the moon was personified with attributes like good manners, while being held responsible for bad things like aging or unpleasant weather. For early modern England, it was best to consult the location of the moon to determine the best time to do everything from bringing in the harvest to getting a haircut.

Given the prominence of the moon and the pervasiveness of its place in the culture, understanding how it works and its attributes becomes essential to understanding plays like A Midsummer Night’s Dream which mentions the word “Moon” close to 40 times and employs the moon, algon with madness, as a constant theme of the story.

Our guest this week, Rachel Aanstad, writes about the place of the moon in the culture and mindset of 16th Century England in her Illustrated Handbook and Encyclopedia for A Midsummer Night’s Dream. Today she joins us to explore the history and place of the moon and why it held such an important role in Shakespeare’s lifetime.

Rachel Aanstad is the author and illustrator of A Midsummer Night’s Dream Illustrated Handbook and Encyclopedia and is currently working on A Twelfth Night or What You Will Illustrated Handbook and Encyclopedia. She is the Artistic Director of the Rose City Shakespeare Company and the producer of The Twelfth Night Podcast by Rose City Shakespeare Company. You can join her group on FB Shakespeare’s World and Words or There Will Be Bawdy. She has an MFA in technical theatre and is a retired architect and set designer. She lives in Portland, Oregon in a house with her family, 3 dogs, two cats and a few thousand books.

Places to find Rachel and connect with her:

I will be asking Rachel Aanstad about:

Yates, Frances. The Occult Philosophy in the Elizabethan Age, Routledge 1979

The Moon and Elizabeth I

During Shakespeare’s lifetime, Elizabeth I was known for being authoritative and specifically for being a virgin. In mythology, and particularly in Roman myth, the Roman moon goddess had many parallels with Elizabeth I. There were so many parallels, in fact, that in popular iconography, poetry, and pageants, Queen Elizabeth was depicted as the goddess of the moon.

The Royal Museum Greenwich’s website describes the pearls in Elizabeth I’s Armada Portrait as: “Pearls symbolize Elizabeth’s chastity and connect her to Cynthia, the Greek goddess of the Moon, who was a virgin and therefore seen as ‘pure’.” Several portraits of Elizabeth included pearls for this reason. In his 1580 poem for Elizabeth I, Sir Walter Raleigh called her Cynthia and compared her to the Moon. (The Ocean’s Love to Cynthia, by Sir Walter Raleigh, 1580).

As our guest explains, “We can understand why [Elizabeth would be compared to the moon], because the goddess of the moon was famously a virgin and kept a lot of women around her in a kind of court.”

The queen made a specific point to appeal to her authority and while not all the references to the moon in Shakespeare’s plays are directed at Elizabeth I (such that you can’t conclude all moon references are code for Elizabeth) you can know that as a theme, having the moon play a prominent role in a play before Elizabeth I was quite intentional.

The Moon in Holinshed’s Histories

In Shakespeare’s King John, the character Hubert de Burg reports to the King that  “five moons were seen to-night;Four fixed, and the fifth did whirl about, The other four in wondrous motion.” That comes from Act IV Scene 2. Rachel explains that this story comes from one of Shakespeare’s favorite influences, Ralph Holinshed.

“He got it from Holingshed, who got it from someone named Roger of Wendover who wrote “the flowers of history” back in the 1200s.”

According to Peter Farey, the story of the five moons was described by Holindshed this way:

About the moneth of December, there were seene in the
prouince of Yorke fiue moones, one in the east, the
second in the west, the third in the north, the fourth
in the south, and the fift as it were set in the
middest of the other, hauing manie stars about it, and
went fiue or six times incompassing the other, as it
were the space of one houre, and shortly after
vanished awaie…” (163.i)

Several academics discuss the importance of the five moons, including the idea that perhaps the celestial reference is intended to describe John’s relationship to the kingdom more generally. There’s precedent set by Shakespeare for this implication similar to the reference to three suns in Henry VI Part 3. You can read the discussion and the proposed definitions of the five moons here.

The Moon for Pregnancy Tests

It was interesting in the plays Othello and Pericles to watch characters tell time, and reference time, according to the moon. I was surprised to see these references, not because telling time by the moon in itself is surprising, but because calendars as well as sundials were available for Shakespeare’s lifetime, so it seemed to me that the people would count the passing of time using those implements similar to how we do today. Rachel provided her own reasoning for why the moon was used to tell time:

“It was another word for Month. You can’t look at sundial to see what month it is, and calendars were around but not necessarily common. You might also have people who didn’t agree on what day it was. You could look up into the sky to see what phase the moon was in, so this was a reliable way to keep track of months. We just had harvest moon, coming up on a wolf moon, and then a cold moon, so people tended to think in very lunar ways of measuring time. Women’s monthly cycles often happen on a lunar calendar, as well, so people were very interested in whether or not they were pregnant or their partner was pregnant, and so it was something important to track. Pregnancy tests didn’t exist…”

The Moon as a kind of streetlamp

Because the 16th century was prior to the advent of electric lighting, there were many things the moonlight could allow that we perhaps take for granted today. As Rachel indicates, the presence of the moon was much more tangible in a society that did not have electric lighting. Rachel shares a few of the functional things one can do by the light of the moon:

Yes, they absolutely were. You could go picking herbs at night, you could go to the tavern and drink, and use the moon to guide you. Without electric lighting, the moon’s light was hugely important and provided light to guide you by. Animals did also rely on the moon so there was often a frenzy of hunting at night during a full moon, and humans would want to catch the animals that were out in the full moon. It was almost another kind of daytime when the moon was full. When the moon was dark, people wanted to stay home because you couldn’t see anything.