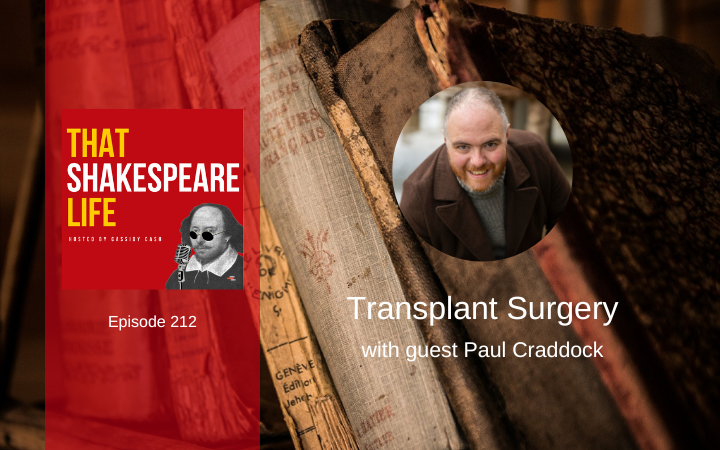 From blood transfusions to replacement of legs, during Shakespeare’s lifetime was when medical science was trying to figure out the best way to replace broken or damaged body parts with transplants. Having only just discovered that the heart was a muscle, pumping at regular intervals, it was a revolution in medical science to consider each body part as a kind of peice in the mechanism that was the human body. We see these new concepts echoed in the work of our favorite playwright, William Shakespeare when characters like Hamlet and Titus Andronicus talk about the pulse keeping time and the heart beating outrageously. Our guest this week, Paul Craddock, has just published a book on the history of transplant surgery called Spare Parts, in which he details the advancements being made in the medical field during Shakespeare’s lifetime. He joins us today to explain what kinds of surgeries were being done, who the famous players were in the medical community of the day, and exactly what materials they used to accomplish these, often macabre, medical marvels.

Paul Craddock is a cultural historian and award-winning author based in London. His debut book, Spare Parts, published by Penguin, was a Daily Mail Book of the Week in the UK and won the Special Commendation of the Royal Society of Literature Giles St Aubyn Awards. It will be published in North America by St Martin’s Press on May 10th, 2022.

I’ll be asking Paul Craddock about:

(Notes below for each record are written by Paul Craddock just for you!):

Shakespeare and the 4 humours : https://wellcomecollection.org/articles/W-MM-xUAAAinxgs3

Empire of the Scalpel by Ira Rutkow, From a renowned surgeon and historian with five decades of experience comes a remarkable history of surgery’s development—spanning the Stone Age to the present day—blending meticulous medical studies with lively and skillful storytelling.

Surgery and Selfhood in Early Modern England by Alanna Skuse, examines diverse kinds of surgical alteration, from mastectomy to castration, and amputation to facial reconstruction. Body-altering surgeries had profound socio-economic and philosophical consequences. They reached beyond the physical self, and prompted early modern authors to develop searching questions about the nature of body integrity and its relationship to the soul

Gaspare Tagliacozzi and Early Modern Surgery: Faces, Men, and Pain (The Body in the City): This book uses the work of Bolognese physician and anatomist Gaspare Tagliacozzi to explore the social and cultural history of early modern surgery. It discusses how Italian and European surgeons’ attitudes to health and beauty – and how patients’ gender – shaped views on the public appearance of the human body.

While skin grafts were common, Paul explains that routine surgery to transplant large organs like legs, as shown in the famous painting above, was not taking place in medical practices as a matter of routine. There simply wasn’t the medical knowledge about veins, nerves, and the circulatory system to support a surgeon being able to put large organs back together again during Shakespeare’s lifetime. (I’m going to guess that’s why Cosma and Damien’s accomplishment was deemed a miracle.)

Paul’s book outlines skin grafts, including using the skin of a forearm to replace skin on the nose and at one point during the process, the patient’s arm is actually surgically attached to his face. However, when doctors of the 16th century were performing surgeries like skin grafts, they were operating off of old techniques written about by predecessors like Galen and Vesalius.

By the time Shakespeare was alive, skin grafts weren’t actually considered medical operations at all, but instead were categorized in the contemporary mindset as an old folk remedy, practiced by peasants.

Skin grafts has been around since ancient India, Ayurvedic surgical text, sophisticated that you could only treat royalty if you could master skin grafting. By the time we get to Shakespeare’s lifetime, skin grafting had lost its’ regal association, and was exclusively an operation performed by peasants and farmers. They didn’t refer to any books, it was a traditional procedure that had come down through the generations, guarded as it were, by families of secretive surgical practitioners. When it comes to the legitimate traditional medical practices of the time, doctors physicians knew about skin grafting, but they didn’t understand it. Vesalius, the most cutting edge anatomist of the day, he thought that skin grafting was actually muscle grafting, and it showed the problem with legitimate medicine in that period.”

In the mid-16th century, Gaspare Tagliacozzi (1545-1599) produced a landmark (the first of its’ kind) completed dedicated to to plastic surgery and reconstruction. It was written by Gaspare Tagliacozzi, a professor of anatomy and surgery at Bologna. The De curtorum chirurgia per insitionem (“On the surgical restoration of defects by grafting”) describes the theory and practice of operations to repair the nose, lips, and ears using skin grafts taken from the upper arm of the patient. (Source) Above (Scroll through) are images from his text that show the procedure of performing a skin graft.

Galen is considered one of the father’s of medicine, and heralded as the the most accomplished medical researcher in antiquity. He lived from AD 126-216. His work influenced the development of major scientific disciplines like pathology and anatomy, but also pharmacology and physiology.

Paul explains that his establishment as a pillar of the medical mindset is one major reasons doctors of Shakespeare’s lifetime relied upon, and referred to, his work:

They relied on books, ancient authority, and one person’s authority more than anybody else’s and that was Galen. Galen’s understanding of the body was so far removed from the reality, it was based on observations, but his observations were 2nd century AD Rome, he was a physician to the gladiators, and his observations were based on animals. To top it off, the books that people used in the 16th century were latin translations of Arabic translations of Galen’s original greek. But grafting existed outside of that tradition. And it’s even worse than playing telephone to perform surgery because your original was based on sheep.

“Give me your hand and let me feel your pulse.”

Transplant Surgery would have needed an understanding of veins

In the 16th century was when pioneers of medicine like William Harvey were just beginning to understand the body’s system of blood flow. There was an understanding that the heart pumped, but the idea of there being a human body as a machine that included mechanisms, gears, and parts was a concept growing in understanding for Shakespeare’s lifetime. In Comedy of Errors, IV.4, the character Pinch says, “Give me your hand and let me feel your pulse.” In Hamlet, III.4, Hamlet himself says, “My pulse as yours doth temperately keep time And makes as healthful music.” Titus Andronicus mentions “When thy poor heart beats with outrageous beating” and There are several other references to the pulse beating in a person’s body, and that pulse keeping time.

The contemporary understanding of pulse and how the heart works was different in Shakespeare’s lifetime than what we know today. One doctor in particular who made significant advancements towards our understanding of the heart muscle, that Paul writes about in his book, is a man named William Harvey. Paul writes that Harvey’s secret late night explorations (Though truly horrible) lead to a significant scientific discovery about the pulse and the heart.

Paul explains how the body system was understood for Shakespeare’s lifetime:

Paul, what did Dr. William Harvey discover and how did his work change what 16-17th century science believed about the heart? (Do mention here about Harvey’s experiments on animals and people, and be accurate about the heart as a muscle and the challenge to the idea of muscles creating their own blood, but try to avoid being too graphic about describing the mutilation of the dog and the relatives of Harvey, as we do have school-age children who listen to our show).

It’s starts with food. You eat, and there’s a metamorphosis of the stomach into a hand, which reaches up the gullet and grabs the food, brings it down into the stomach. When it’s in the stomach, the stomach concocts it, cooks it, and the food is transformed into two different fluids. One if the non-nutritional part that becomes black bile and goes to the spleen, and the rest is the nutritional part and that goes to the liver where it is turned into blood. There is is imbued with (depending on Galen or Aristotle) it’s given a vegetative or spirit, imbued with the power to heal your cuts and replace bits of you that have been damaged or to create growth. From the liver, the blood is attracted to different parts of the body, wherever it’s needed. Some of it makes its’ way to the heart, connected to the lungs, where the vital breath, the breath of God enters the body. And that’s where you get the vital principle added. Some of it again ends up in the nervous system, not technically  the nervous system, but other pats and given a higher spirit, called the nervous spirit, basically the higher faculties of sensation and thought. Blood is produced in the body and makes its’ way where it’s needed.

There is a woodcut inside Paul’s book called “A Verger’s Dream”, that shows Saints Cosmas and Damian transplanting the leg of a black gladiator onto a white verger, dated 1495. Paul explains that the mechanism for skin grafts was a well known technique from a long time in the past, and many of the claims of transplant surgery (replacement of limbs) from this period were entirely made up.

“The mechanism we talked about in relation to skin grafts was a well known technique and the person who stole it, Leonardo Fioravanti, stole it from a secretive family and his student’s student wrote it up, Fioravanti, said that a year after he’d stolen that technique, he was out walking with his Spanish friend on the coast of Africa, but thinks it was actually a province around Egypt (not sure precisely [EDIT THIS HERE] there was a war on with the Ottomans at the time, came across Ottoman soldiers, Spanish friend gets his nose cut off, falls into the mud, gets dirty, Fioravanti, picks it up and cleans it up with his own urine and he puts it on his friend’s face again, bound it with bandages, and after a few weeks the nose was attached to his friend’s face. Important to understand he was a complete liar. He said that he went to a hospital for incurables and cured everyone.

“This transplant image [Verger’s Dream painting] is the most famous and one of the most painted scenes in Christian art, but one thing more is that in the 16th century, just before Shakespeare’s birth, people started to get really sick of these myths about magically transplanted arms and legs and noses, and Francois Rabelais, French playwright, created a character to lampoon it, he had a doctor who comes cross a man who had his head chopped off, and the doctor reattaches that head, describes him sewing it back on and the character wakes up and yawns and does a great fart and that is how we know the body is alive.”

If you enjoy our show and like learning history along with us each week, then please rate and review us on your favorite podcast platform.