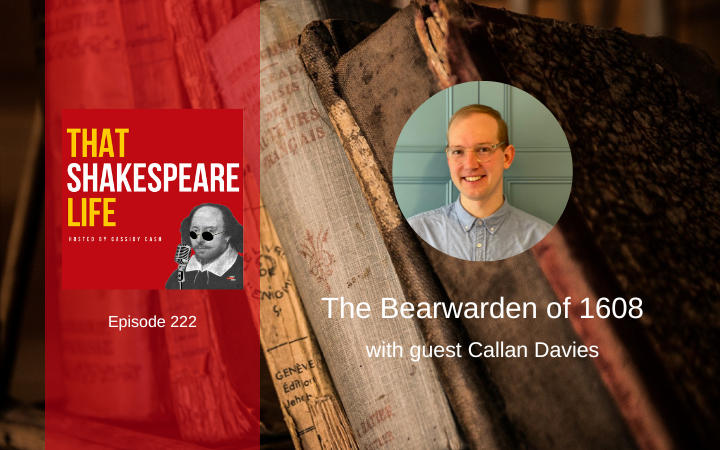 Welcome to Episode 222 of That Shakespeare Life, the podcast that goes behind the curtain and into the real life and history of William Shakespeare.

An anonymous dairy was written in 1608 cataloging the keeping of bears for the sport of bear baiting in England. Our guest today calls this diary the “Bearward Diary of 1608” and the term “bearward” is used to describe individuals whose job it was to take care of or travel with a bear (or in the case of this diary, multiple bears), for the purpose of putting on bearbaiting shows around England.The diary is a fascinating glimpse into the history of bearbaiting and the logistics behind finding, showing, and traveling with, bears in the 17th century, To help us explore the diary in more detail and understand some of the history it reveals about bears in Shakespeare’s lifetime is our guest and contributor to the Box Office Bears project, Callan Davies.

Subscribe to get the latest episodes delivered to your inbox.

Callan Davies works across early modern literary, cultural, and theatre history. His new book, What is a Playhouse? England at Play, 1520-1620, is an accessible account of the playhouse across early modern England, forthcoming with Routledge in 2022.  Callan is part of the Box Office Bears project (researching animal sports in early modern England), as well as the Middling Culture (www.middlingculture.com) team examining early modern status, creativity, writing, and material culture, and the Before Shakespeare team (www.beforeshakespeare.com). The Box Office Bears project is what Callan joins us to discuss today, which is  a UK Arts and Humanities Research Council-funded project bringing together researchers from the Universities of Nottingham, Roehampton and Oxford and project partner Museum of London Archaeology (MOLA). They are using Zooarchaeology, Archaeogenetics (the study of ancient DNA), Archival Research, and Performance studies to examine the history of Bears in Early Modern England. Learn more about Callan and see more of his work in the show notes for today’s episode.

He is the Editor of the Curtain playhouse records for Records of Early English Drama’s Records of Early English Drama REED London Online and his first monograph, Strangeness in Jacobean Drama, is published by Routledge (September 2020). His article on bowling alleys and playhouses in sixteenth century London for Early Theatre won the MRDS Barbara Palmer Award 2020, and he has pieces forthcoming on middling community and Bristol’s Wine Street playhouse for English Historical Review; prose and playing for The Oxford Handbook of Thomas Nashe; on the early years of the St Paul’s Playhouse for a collection on Old St Paul’s and Culture; and he is co-editing a collection on early modern ephemera with Hannah Lilley and Catherine Richardson.

I’ll be asking Callan Davies about:

Box Office Bears.com This is a great place to see pictures and diagrams of 16-17th century bears.

Book coming out in August , What is a Playhouse (available for pre-order)

Erica Fudge, (series of chapters, Routledge companion to Shakespeare and Animals) (Note from Cassidy: This is a $250 book. That’s not going to be reasonable to anyone that buys several books. I recommend you get a copy of this at a library and make a photocopy of the chapters by Erica Fudge) Connect with Erica at her university website page linked at her name here. She’s at the University of Strathclyde Glasgow

Records of Early English Drama series, REED, amazing compendium of documents to do with entertainment industry and it now has digital editions of their latest volumes. (Note from Cassidy: Jumping up and down with happiness! I enthusiastically support this recommendation. REED is amazing!)

Bear Baiting was a big industry in England

Bears were extinct in England by Shakespeare’s lifetime, making their public appearance not only a novelty but a huge draw for spectators. Part of what the Box Office Bears project aims to explore is exactly where the bears came from and how they were imported and exported from England.

The reason it was so rampant, however, was because the sport was hugely popular. It’s almost like Alabama and football. or Canada and hockey. Almost. Callan explains,

It’s a strange idea to get your head around today, but the sport of bear baiting was as popular or perhaps even more popular as play acting and bear baiting at its’ base was tying a bear to a stake and setting one or more dogs on it for them to fight. It was a cruel practice, and even some at the time expressed disgust at the sport, but that didn’t damage it’s popularity.

His project comes across over 1200 references to bears in all areas of England, and so they are like a traveling circus but certainly moving around the roadways of this period. Some of them were a national tour.

Bear Baiting on Bankside was the Gold Standard of Performance

When it came to the Joneses of Bear Baiting, the performances in Bankside, England, were the ones to emulate if you wanted to be successful in the bear baiting industry.

Callan shares that while companies travelled around with bears to various parts of the countryside, it was always the performances at Bankside which these troupes were trying to recreate:

We think of London as the primary hotspot of this period, and similarly with bear baiting, many of these early arenas were there to accommodate bear and bull baiting and the skeletal remains we are working with are drawn from sites on Bankside, but what this diary encourages us to remember is that there were hot spots all over England in this period. Redding is one of the stops they did in 1608, but there were places in the north and south of England that created very similar environments as what was going on in Bankside.

They may have been emulating Bankside with their performances, but the Bearward Diary of 1608 (so named by the scholars at Box Office Bears), indicates that several small towns were included on the stops taken by the travelling group of 1608, often to towns that aren’t even listed on known maps of the period:

The Bearward diary extracts locations mentioned in this diary, it’s not actually a “Diary” in the modern sense, it’s more of a memorandum or account book. This anonymous Bearward who wrote it is noting the expenses going out and the money coming in, as well, so it’s a working financial document, but what it does is tell us how long the bears and bearward were located at  specific place, for how long, and where they go next. We can take this out and map their directions of the route they took.

The route of this particular document outlines many places that aren’t “on the map” some of them are places Callan has never heard of, small villages today, and yet they are stopping to perform there. We have to think about the relationship of these small towns with London.

Bears travelled with an entourage

it’s not fully clear who all travelled with the bears, but we can presume they didn’t make their own travel or lodging arrangements. When we look into the Bearward diary for clues as to what kind of specialties would have been needed to take care of a bear or multiple bears travelling around the country for various performances, and it seems that multi-tasking was the name of the game for people who took care of bears. In the case of the 1608 diary, a butcher apparently was necessary, but not for the reason you might think.

Ned the Butcher and Bryant (mysteriously). It’s hard to find out more about who these people are, because “butcher” only tells us his profession, but not his surname or any biographical information. Butchers were closely associated with bear handling, because for hundreds of years it was a requirement for butchers to bait bulls before processing them because it was supposed to be good for the meat to bait the bull first, so there was a relationship between this sport and butchers, but we aren’t clear how he was connected here.

Bears were cared for, but unclear to what extent

We do know that the bears were fed and given medical care (if not by the diary’s own admission but also for sheer necessity and logic, but in this case, the diary also indicates they fed them.) For the Box Office Bear project, they rely on a great deal more than just conjecture or even textual evidence, as they are strategically applying chemical analysis to understand what the bears were eating in the 16th century.

The diary is unhelpfully vague because when they put an expense for food. “For the bears beer” or “for the bears meat” is a shorthand for consumables in general, but another side of the project is the zoo-archaeological element, is perhaps able to answer this question.

One other aim of the project is what was the diet of a bear in 1608. Zoo-archaeology looks t chemical investigations of the bones to explore what they ate when they were growing up and where in England they grew up based on the soil structure of the country.

In addition to their diet, the diary also indicates that the bears were given at least basic levels of medical care.

[The diary lists a] Schilling and two pence for oil for the blind bear, and that reference indicates there was some care being given o the bears. There was some emotional relationship of care for the bear, and approaching that notion of respect is looking at the role they played nationally or locally, and they are almost always given human names and were celebrities in their own right. All of that being the case, it relied on an economic structure. Bears were relatively expensive, one inventory in the 1600s puts them at 12pounds each, so bearwards would have been invested in the survival and well being of the bear, because you needed it to survive and fight on because they are the star of the shows

Bears stayed wherever space was available

When it comes to sleeping along the route, bears and their bearwardens stayed in whatever spaces were available. While some towns seem to have had specific lodging known for bears, other towns just let them stay in spare barns or open spaces.

The bears had lodging, because there’s line items for “lodging for the bears’” but it could be a tavern yard, or a church house, and was a range of locations. Nantwich one bearward kept his bears on a property called “The Bear” animation on their website about this location. One of the most telling clues for getting our head around the living situation of the bears is an owner in 1622, left behind an inventory of goods they possessed, and the fifth item and by far most expensive is a bear called Chester. Further down the inventory, (going room by room all bits and pieces of their world, and therefore an architecture of their house) includes a load of outdoor sheds and working bits and pieces, one of which, is a “bear house and stable” which had a scratch over it, that’s a trough to feed animals.