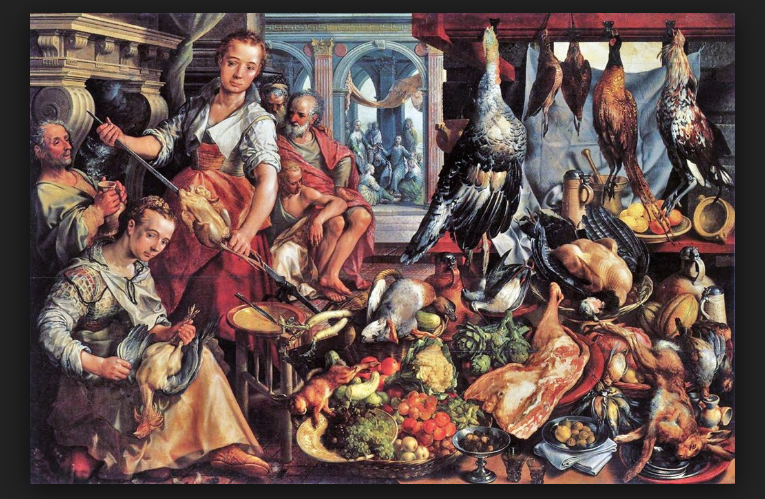 Image is not mine. It’s from a blog on Elizabethan Food which I encourage you read here. (That’s not an affiliate link, I’m just trying to be very clear that the image is not mine and give credit where it’s due.)
Turkeys were exotic animals for England in the 16th century, but by the time William Shakespeare was born in 1564, the turkey was fast becoming a Christmas staple, popular at dinner tables around the country.

Shakespeare uses the word turkey three other times in his plays, and though he obviously knew the word, we wondered Did Shakespeare Eat Turkey?

Our guest this week on That Shakespeare Life is Malene Lauritsen, from the University of Exeter who discovered the bones of what she believes are the first turkeys ever to set foot in England. The bones date to between 1520 and 1550.

In England, turkeys were a popular bird by 1550, and were a common sight at Christmas dinners by 1570, when William Shakespeare was just 5 years old.

But where did they come from?

They came from the Americas.

Native Americans ate wild turkeys which were living in the Americas. Native Americans also used turkey feathers for headdresses and other ceremonial purposes. During the time England was sending ample amounts of explorers over to this new land to seek out exotic items, the turkeys they discovered here were rare and not available in England. Therefore, ambitious entrepreneurs like William Strickland seized the opportunity to bring the turkeys back to strengthen England’s economy and sell them as a way to impress foreign dignitaries.

The first turkeys were introduced to England in 1524 or 1526 by William Strickland, an English landowner and trader who made his fortune sailing to the New World

Strickland is recorded as having bought six turkeys from Native American traders, and after he sailed back with them to Bristol, which is 80 miles away from Exeter, sold them for tuppence each.

When turkeys first appeared in England they would have been a rare sight and the first ones are more likely to have been kept as pets for display of wealth rather than served as food.

Wild turkeys were eaten by native Americans and their feathers were also used for ceremonial purposes, including headdresses and robes.

Strickland made such a fortune importing the birds that he able to buy a stately home in Yorkshire and even adopted the turkey on his family crest, the first time it had been depicted in Britain.

The village church where Strickland is buried still has images of turkeys depicted in its stained-glass windows.

So Why is it called Turkey?

One theory is that when Europeans first encountered turkeys in America, they confused them with the bird from Constantinople, Turkey, called a guinea fowl. The guinea fowl were already in Europe, arriving there by Turkish merchants. So the theory suggests that they might have originally been called “turkey cogs” Similar to the “turkey-cock” reference you see in Shakespeare’s plays, and that would eventually become simply “Turkey.”

A second theory suggests that turkeys did not come to England directly from England (originally, as we do know William Strickland brought them in directly) There were merchant ships from the Ottoman Empire which would bring turkeys from the Middle East, where they were being bred. Since the middle eastern merchants were called “turkey merchants” this lead to the name “turkey cock” or “turkey hen” which eventually became “turkey”

However it got it’s name, Shakespeare was using this word, turkey, in his plays by 1601 or 1602 when he wrote, Twelfth Night, and linguists have concluded that the lack of context around Shakespeare’s use of the word implies the phrase was widespread.

So while knowledge the turkey was very widespread, it’s unclear if William as a young boy would have had turkey at his Christmas table.

For one thing, exotic foods like turkey, even if well known, were allocated only to the rich who were the only ones who could afford it. It would be later in the Victorian Age that the turkey at Christmas, along with the Christmas Tree, really became a staple across all the classes.

What is interesting to consider when connecting Shakespeare to American history is that by the 17th century, turkey was already a traditional food in North America. Since they undoubtedly brought this tradition over from England, there has to be a relationship there. I like to think the English were used to having turkey for their big celebration at Christmas back home, so when they wanted to celebrate in their new North American home, turkey was the natural choice. (no pun intended)

It seems that while we cannot prove it undoubtedly, it’s highly likely Shakespeare consumed turkey, and that he ate it just like we do, for the holidays.

That’s it for this week.
Thank you for joining me! I’ll see you next week.

Join the Newsletter and Download this Diagram of The Globe Theater

Historical diagrams delivered monthly are just one of the many benefits of subscribing to That Shakespeare Girl newsletter.
You’ll also get episode notifications, travel discounts, and be the first to know about what’s new. If you like learning about Shakespeare, then subscribe today, and together we’ll learn something new about the Bard.