Twelfth Night Celebrations Every January Including Music and Misrule 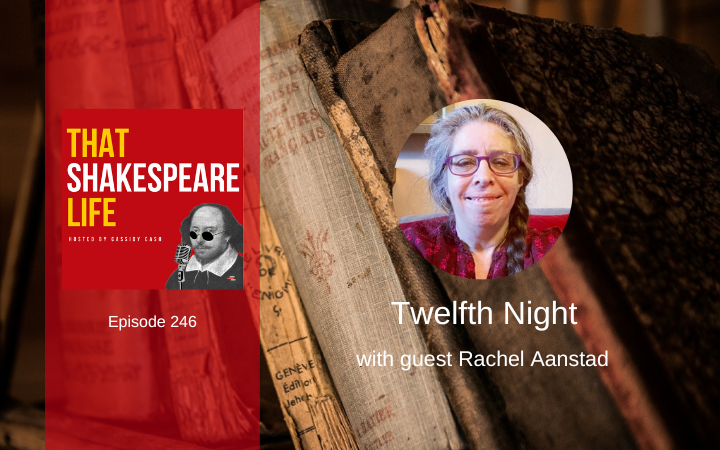 Just like Shakespeare’s work, our show is supported by patrons. Become a patron to contribute to the show directly and access our entire back catalog of 100+ patrons-only episodes.

Welcome to Episode 246 of That Shakespeare Life.

This Thursday, January 5, is Twelfth Night, the official end of the 12 Days of Christmas. For Shakespeare’s lifetime, celebrating the Twelve Days of Christmas was a huge occasion, and one which included merriment right up until the very last day. In Shakespeare’s plays, we see many of the Twelfth Night customs come to play including the complete upheaval of established social order where we have boys dressed in mock religious processions, lots of alcoholic drinking alongside elaborate meals, as well as bouts of parody and general misrule against moral order.And of course, for Shakespeare, all of these moments of wild abandon are accompanied by song and dance. To help us understand what Twelfth Night was and why it was celebrated with such crazy antics is our guest and author of a new book on Twelfth Night customs, Rachel Aanstad

Rachel Aanstad is the author and illustrator of “A Midsummer Night’s Dream Illustrated Handbook and Encyclopedia” and is currently working on “The Twelfth Night or What You Will Bawdy Illustrated Handbook and Encyclopedia”. She is the Artistic Director of the Rose City Shakespeare Company and producer of The Twelfth Night Podcast by Rose City Shakespeare Company. You can join her group on FB “Shakespeare’s World and Words or There Will Be Bawdy”. She has an MFA in theatre and is a retired architect and set designer.

I’ll be asking Rachel Aanstad about:

The Evolution of the Early Tudor Disguising, Pageant, and Mask

The Elizabethans at Home by Lu Emily Pearson

Love the history you’re hearing? There’s more inside the vault!

Sign up to be a patron of That Shakespeare Life for just $5/month and immediately unlock over 100 episodes from our back catalog along with other great patrons-only bonuses.

Marry, I will; let them play it. Is not a comonty a Christmas gambold or a tumbling-trick?

— Taming of the Shrew (Prologue)

While Shakespeare’s play called Twelfth Night isn’t actually a celebration of Christmas within the play itself, the themes of that story mimmick how Shakespeare and his contemporaries would have marked the holiday season. Themes like upturning traditional roles, wild costumes, and playing tricks.

In fact, the play Twelfth Night was first staged for a Christmas celebration before Queen Elizabeth in 1602.

Neither of either; I remit both twain. I see the trick on’t: here was a consent, Knowing aforehand of our merriment, To dash it like a Christmas comedy:

It was popular to play tricks, wear wild colors and costumes, and for roles of authority to switch places with roles of servitude. The servants become masters, and generally there is appointed a Lord of Misrule at parties whose pleasure is to generally create mayhem wherever he goes.

One tradition that was held during this time of celebration was the Twelfth Night cake (very similar to the King cake you’ll see at Mardis Gras in New Orleans). Inside a cake was baked a variety of items and each one represented a gift, or a job, for the receiver to perform at the party.

Twelfth Night Cake – dense fruit cake, King or Queen of the Bean or if you had other tihngs

Depending on which items you received in your piece of cake, you were responsible to bring that assigned bit of mirth to the celebrations.

At Christmas I no more desire a rose Than wish a snow in May’s new-fangled mirth;

In Shakespeare’s lifetime one very popular way to celebrate Twelfth Night (or any of the 12 days of Christmas) was to go wassailing. (You may hear the song “A wassaling we will go, a wassailing we will go…” in your head if you’re from the US). The tradition varies but generally speaking, each house would make a pot of wassail, which is a highly alcoholic and very fragrant Christmas drink that included herbs like clove and cinnamon. If someone came up to your house singing, you were required to give them some wassail and offer them some food. Many of the citizens of the town who were too poor to otherwise get food on their own took this opportunity to receive food and drink, while the donating families saw it as an act of good charity to offer it. While many destitute families were filled with good food in this way for Christmas, it was also just a generally jolly activity for anyone that wanted to join in on the fun. Whether or not the wassailing involved actual singing the way we think of caroling today was a point of debate among sources I consulted for this episode, but it seems that singing, along with offering gifts to the host household, were ways to be rewarded with a cup of wassail during your visit.

Will I with wine and wassail so convince That memory, the warder of the brain, Shall be a fume, and the receipt of reason A limbeck only…