How to Make Verjuice 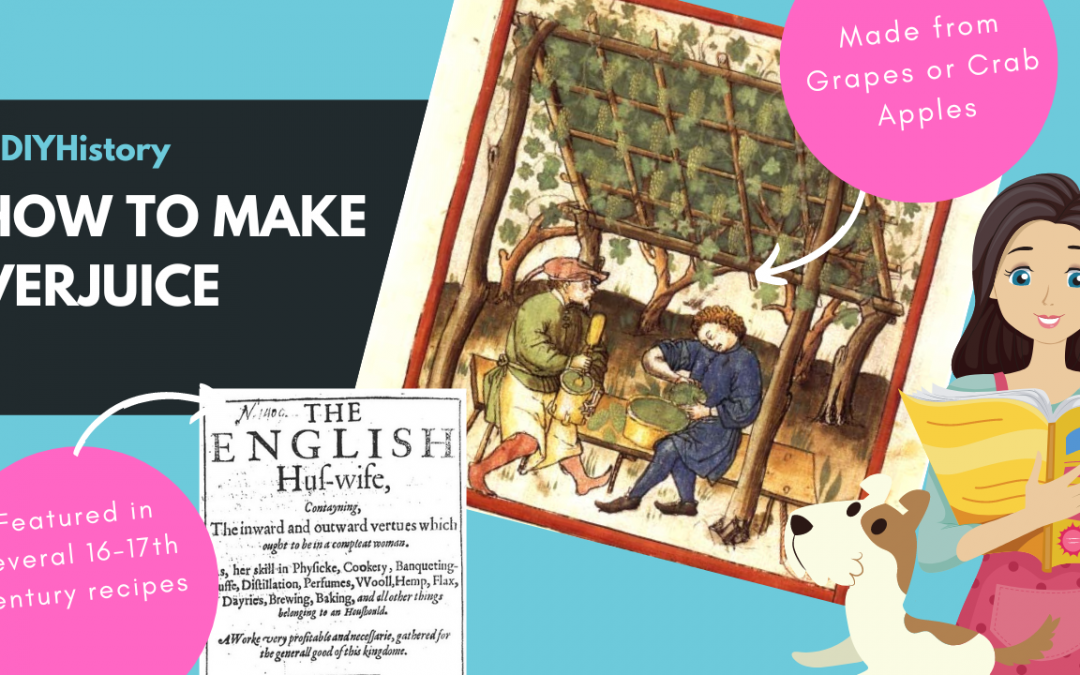 That Shakespeare Life and DIY History are supported by our patrons. You can become a patron and get printable instructions for our DIY History episodes right here. This website contains affiliate links.

Though not mentioned in Shakespeare’s plays that I could find, one ingredient from his lifetime that Shakespeare would definitely have known about is called verjuice. It’s a very acidic liquid ingredient made from grapes. Today, I’m going to share with you some history about verjuice and show you how you can make it at home.

When grapes are growing in difficult climates, winemakers will do what’s called thinning their grapes. That means they go through and cull out the bunches of green grapes that are ripening slower than the others so that the nutrients of the vine itself can focus on the more mature grapes.

But when you do that, then you have a bunch of green grapes and you need to do something with them. That’s where verjuice comes in.

The word itself comes from the French, the word “ver” meaning green and the word jus, meaning juice. In English it’s often spelled verjuice which is an amalgamation of languages but it’s still just green juice.

Most often it is made from green grapes, but it can also be made from crab apples or any other sour fruit.

The taste of the verjuice is highly acidic, and indeed the process of making verjuice includes wearing gloves and not getting the juice in contact with your skin because it is very acidic.

During Shakespeare’s lifetime and from cookbooks in the period, you will see verjuice added for flavor to a variety of dishes. I’ve found it included in recipes for pumpkin pie, as well as for pottage.

Now, Pottage was a mainstay dish for the working class in Shakespeare’s lifetime and it is a lot like a pot roast or even a stew, but with tons of vegetables. Now in Shakespeare’s lifetime, they were skeptical of the safety of eating raw vegetables so whenever they cooked with them, they cooked them a long long time and just really cooked the mess out of the vegetables, so they ended up very soft and even mushy, which is why pottage was a great vehicle for the vegetables, and I think if I show you the recipe for pottage, you’ll understand why they felt they needed to add some acidic taste.

In the cookbook The English Housewife from 1615, Gervais Markham outlines how to cook Pottage. He says:

If you will make pottage of the best and daintiest kind, you shall take mutton, veal, or kid, [that would be lamb, cow, or goat] and having broke the bones, but not cut the flesh in pieces, and washed it, put it into a pot with fair water; after it is ready to boil, and is thoroughly scummed, you shall put in a good handful or two of small oatmeal, and then take whole lettuce, of the best and most inward leaves, whole spinach, whole endive, whole succory, and whole leaves of cauliflower, or the inward parts of white cabbage, with two or three sliced onions; and put all into the pot and boil them well together till the meat be enough, and the herbs so soft as may be, and stir them oft well together; and then season it with salt and as much verjuice as will only turn the taste of the pottage; and so serve them up, covering the meat with the whole herbs, and adorning the dish with sippets.

Sippets, if you’re curious, are small pieces of bread you can use to dip into whatever you’re eating. It’s like having bread slices with your soup.

As you can see, pottage was bland vegetable heavy–I mean a whole head of cauliflower! Wow. So it definitely needed that salt and verjuice to bring it to life.

In exploring verjuice, I am reminded of how we cook turnip greens here in the South. In a similar fashion, you put them in a large pot with fair water and your meat of choice, then you cook it at a low simmer for hours and hours. When you get it out to eat it, the expectation is that you’re going to salt it and cover it in pepper sauce which is a similar ingredient to verjuice.

In fact, wikipedia says that verjuice is used here in the American South, although I was born and raised here and i’ve never heard of verjuice, I have grown up on pepper sauce and we put it on everything. So, I think it would be fair to substitute pepper sauce on your pottage if you wanted to try out Markham’s recipe.

The taste is similar to vinegar or lemon juice and when youre cooking, you can actually substitute lemon juice or vinegar, or apple cider vinegar when you’re cooking if you don’t have a bottle of verjuice handy. Although verjuice is considered a Turkish or Middle Eastern staple these days, and so many international food stores here in the US will carry it if you want to pick up a bottle to try it.

But, if you are anxious to try it yourself, it’s not hard to make, it just requires a mess ton of grapes. You need about 12 pounds of green grapes to make 2-3 quarts of verjuice. You squish them, strain them, and store them. That’s it!

Fortunately, here in the US, grapes grow wild around here so if you can scout out some wild vines you could get some from there or you can check with a local vineyard who is planning to cull their grapes anyway, they might have some they would sell you. If you’re fortunate enough to have your own vines, well you’re all set then.

Find printable instructions and supply lists for the verjuice recipe inside the Digital Downloads Library for That Shakespeare Life on Patreon.

That’s it for this week! Thank you for watching. I’m Cassidy Cash and I hope you learn something new about the bard.

I’ll see you next time! Goodbye.

Sources and Other Useful Links: