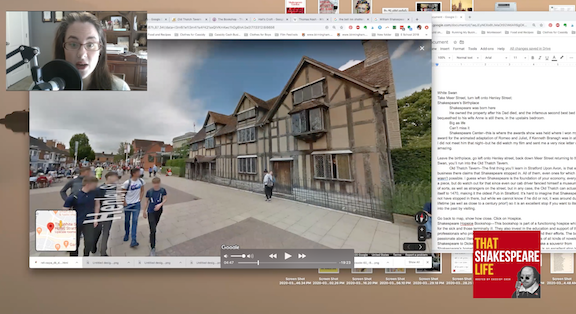 This tour begins at the White Swan Hotel because that’s where I stayed when I went there, and I know my way around from that starting point best.:) It was an awesome experience, so if you need a recommendation, I officially recommend The White Swan Hotel. Then we’ll go through several of my favorite spots in Stratford Upon Avon, just to show you around.

He owned the property after his Dad died, and the infamous second best bed he bequeathed to his wife Anne is still there, in the upstairs bedroom.

Big as life (because it is life).

Shakespeare Center–this is where the awards show was held where I won my first film award for the animated adaptation of Romeo and Juliet, if Kenneth Branagh was in attendance, I did not meet him that night–but he did watch my film and sent me a very nice letter which was amazing.

Leave the birthplace, go left onto Henley street, back down Meer Street returning to the White Swan, you’ll run into the Old Thatch Tavern.
Old Thatch Tavern–The first thing you’ll learn in Stratford Upon Avon, is that every single business there claims that Shakespeare stopped in. All of them, even ones for which it simply wasn’t possible. I guess when Shakespeare is the foundation of your economy, everyone wants a piece, but do watch out for that since even our cab driver fancied himself a museum director of sorts, as well as strangers on the street, but in any case, the Old Thatch can actually date itself to 1470, making it the oldest Pub in Stratford. It’s hard to imagine that Shakespeare would not have stopped in there, but while we cannot know if he did or not, it was around during his lifetime (as well as close to a century prior!) so it is an excellent stop if you want to literally step into the past by visiting.

Go back to map, show how close. Click on Hospice.

Shakespeare Hopsice Bookshop—This bookshop is part of a functioning hospice which cares for the sick and those terminally ill. They also invest in the education and support of the professionals who provide this care, and the bookshop helps fund their efforts. The bookshop is passionate about literature and inside you will find unique copies of all kinds of novels from Shakespeare to Dickens and John Le Carre, so if you want to take a souvenir from Shakespeare’s hometown and do good with your purchase, this is an excellent stop to make.

Down Rother Street to Chesnut Walk

This was the property owned by Susanna Shakespeare, William’s oldest daughter, who was married to John Hall the physician who is thought to have influenced many of Shakespeare’s medicinal references found in his plays. There’s a book out now called John Hall, Master of Physick, that is a translation of John Hall’s medical notes. It’s a fascinating look at medical history in Shakespeare’s lifetime, by one of Shakespeare’s relatives, so I will link to that book below this tour.

Continuing down Chesnut walk, you will arrive at Holy Trinity Church.

As you are walking around Stratford upon Avon you can see the spire of this church from several locations and once you arrive, you are very near the River Avon, and the whole site is simply beautiful. It is like an oasis buried in the middle of what is a bustling town.

Here is the river, let’s see if we can walk down to the church. It’s simply gorgeous. It was the inspiration of my watercolor sketch of Holy Trinity Church which is available inside the members area of That Shakespeare Life. There’s an entire membership library of resources, like printable artwork of Shakespeare properties that I have done myself, and you can download, share,and use them all by becoming a member. Learn more about that at www.cassidycash.com/experience.

If you are interested in the membership but not sure if it’s right for you yet, you can get this print as a sample by joining our email newsletter. I send notifications about new episodes–like this one! Out to our email subscribers and you can sign up for that using the link below this tour (in the notes if you’re on YouTube). Or you can just shoot me an email asking to be added and I’ll get you squared away that way. Cassidy@cassidycash.com When you sign up, I’ll send you the artwork : )

Inside of the church look at that, show where Shakespeare’s Grave is and explain the stained glass window.

They actually have services here regularly, it is still a functioning church–I often attend the virtual services myself because especially now with the global quarantines they live stream the service to their Facebook page and I believe I saw where they just setup a new YouTube channel for that purpose as well. It is very neat to be able to attend church where Shakespeare did whether or not you live in Stratford Upon Avon, so do check that out at the links, again, below this video.

was the first husband of William Shakespeare‘s granddaughter Elizabeth Barnard. He lived most of his life in Stratford-upon-Avon, and was the dominant male figure amongst Shakespeare’s senior family line after the death of Dr. John Hall, Shakespeare’s son-in-law, in 1635.

the Bear Inn (opposite the Swan) and a house in Bridge Street, and a piece of land called “the Butt Close by the Avon” where burghers used to shoot at archery butts (archery shooting field)

Nashe may also have contributed to Henry VI, Part 1, the play later published under Shakespeare’s name as the first part of the Henry VI trilogy. Gary Taylor believes that Nashe was the principal author of the first act.[5] Nashe subsequently promoted the play in his pamphlet Pierce Penniless.

In 1597 Nashe co-wrote the play The Isle of Dogs with Ben Jonson. The work caused a major controversy for its “seditious” content. The play was suppressed and never published. Jonson was jailed; Nashe’s house was raided and his papers seized but he had already escaped to the country. He remained for some time in Great Yarmouth before returning to London.

Judith Shakespeare is missing! I searched but could not find her there, went on to do some research and apparently the last resting place of Judith Shakespeare remains a mystery to this day! On the podcast, Grace Tiffany, visits with us to talk about the life of Judith Quiney (who became Quiney instead of Shakepseare after her tumultuous marriage to Thomas quiney) listen to her history at www.cassidycash.com/009

Shakespeare monument, potentially commissioned by Susanna, is thought tobe a reasonable likeness of Shakespeare in his later years. Frequently vandalized over the centuries, the statue can be seen to have been holding something at one time though we aren’t sure what it was originally.

My research, first trip, video from there.

Will post in show notes. More research needed to know if I am right about that, but I will say–when things open back up do stop in here. It’s a wonderful dining experience. Very good food and kind people.

While you are in Shottery, stop by Mary Arden’s Farm and Anne Hathaway’s Cottage. You CAN walk to Shottery from STratford Upon AVon, but I don’t recommend it. We hopped a cab, because it is a bit further than the properties right in the town center of Stratford Upon Avon.

This is where Anne Hathaway lived before she married William. There is a wooing chair inside this house with the ltters WS on it, which curators there will tell you is what William Shakespeare sat in to “woo” Anne Hathaway. I cannot get anyone to tell me whether that’s accurate or purely lore, but it’s adorable and worth seeing. The house itself is cozy, and remarkably, the ceilings are very low, I almost had to duck to stand inside. You go in and the downstairs is mostly a kitchen, with the bedrooms upstairs.

Far out of the city, not walking distance. In Wilmcote. Worth the triup, but take a taxi or car.

Working Tudor farm, they run it exactly as it would have done in Mary Arden’s lifetime, so really great educational experience and way to see how things worked in times past.

I hope you enjoyed walking around Stratford upon Avon with me today! Thank you to Philippa for this wonderful idea. I hopeit was a nice treat for you to get to see some of my fravorite places. I dind’t stop at the schoolroom and guildhall which is also worth a visit, but youcan explore that as well as the River Avon on Google Maps I will post the addresses for you in the show notes today.

If you are a member of That Shakespeare Life, you can download a hand illustrated print of Stratford Upon Avon directly from the memebrs library so be sure to look for tht in there.

Become a member of That Shakespeare Life and support the work we do on the podcast and episodes likethis one every Saturday, as well as get a digital history activity kit once a month that lets you explore Shakespeare’s history through a hands on activity, they work like science labs for history! Learn more at www.cassidycash.com/experience.

My friend Philippa’s HistoryTours:
www.britishhistorytours.com
British History Tours (who is doing daily tours all over England now until we are all free from quarantine here: https://www.youtube.com/channel/UCENV6bjvjU8F5XrLh1YsBPg