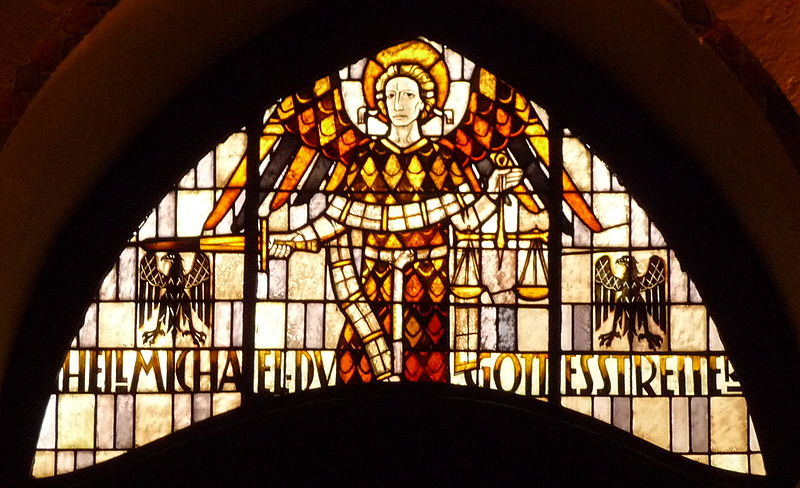 Shakespeare mentions Michaelmas twice in his plays, and both times as a reference for when throughout the year specific actions occurred, mentioned in conversation provided for context.

In Henry IV Part 1, Henry V asks Francis how old he is, and Francis starts to calculate it up by calling attention to “Michaelmas next” Francis doesn’t get to finish his answer because Hal and Poins are playing a joke on Francis and the conversation is interrupted, but the reference is telling about how Shakespeare and his contemporaries calculated up the time–they used the holidays to mark the passing years.

The other reference in Shakespeare’s plays to Michaelmas is found in Merry Wives of Windsor when Simple says “Book of Riddles! why, did you not lend it to Alice Shortcake upon All-hallowmas last, a fortnight afore Michaelmas?”

Again, the reference suggests that telling time and orienting oneself around the idea of “When” something occurred was calculated based on the holidays. But what is Michaelmas, you ask?

Michaelmas is celebrated each year on Sept 29 and marks the end of the productive, or growing season for farmers and the start of “winter” officially.

In medieval England, Michaelmas marked the ending and beginning of the farming year, George C. Homans observes: “at that time harvest was over, and the bailiff or reeve of the manor would be making out the accounts for the year.”

The town bailiff, or chamberlain, for Stratford Upon Avon when William Shakespeare was born was his father, John Shakespeare. It was John Shakespeare’s responsibility to enter the town’s fiscal reports, and surviving records at Shakespeare Documented (part of the Folger Research Library) show that not only did John Shakespeare enter these records for the 1563-1564 year, and 1564-1565 years, but that he was also late turning in both of them and had to pay a fee out of his own pocket in association with this job.

In England, Wales, and Ireland, accounts were due, and a general “reset” of servants, employees, and due dates for fines, fees, rent, or other accounts were settled on what is called “quarter days” four times a year (to correspond with each quarter) there was a festival or holiday selected as the “due date” for accounts.

This was a public accountability system to ensure that debts and unresolved lawsuits were not allowed to linger on. Accounts had to be settled, a reckoning had to be made and publicly recorded on the quarter days.

The British tax year still starts on “Old” Lady Day which is now April 6, but that’s based on the Gregorian Calendar which was introduced during Shakespeare’s lifetime in 1582 (When the bard was 18 years old–but the bard would not have followed it. It was introduced by Pope Gregory XIII, obviously Catholic, with England being staunchly Protestant. It would take Protestant and Eastern Orthodox countries a full three centuries to adopt what they would call the “improved calendar” and England would not adopt the Gregorian calendar until 1750. Which means for William Shakespeare, Lady Day was March 25.

There is a mnemonic for remembering on which day of the month the first three quarter-days fall (Christmas being easy to recall): Every quarter day is twenty-something, and the second digit of the day of the month is the number of letters in the month’s name. So March has five letters and Lady Day is 25 March; similarly June has four letters and September nine, with Midsummer Day and Michaelmas falling on the 24th and 29th respectively.[

At many schools and universities, class terms would begin on the quarter days; for example, the autumn term would start on 29 September, and thus continues to be called the Michaelmas term, especially at more traditional universities.

Celebrated for the Saint Michael, the Archangel who fought against Satan and his evil angels, it marks the start of dark nights and colder days or the beginning of winter. The celebration of Michaelmas is associated with encouraging protection during these dark months. It was believed that negative forces were stronger in darkness and so families would require stronger defences during the later months of the year.

Traditionally, in the British Isles, a well fattened goose, fed on the stubble from the fields after the harvest, is eaten to protect against financial need in the family for the next year; and as the saying goes:

“Eat a goose on Michaelmas Day, Want not for money all the year”.

Sometimes the day was also known as “Goose Day” and goose fairs were held. Even now, the famous Nottingham Goose Fair is still held on or around the 3rd of October. Part of the reason goose is eaten is that it was said that when Queen Elizabeth I heard of the defeat of the Armada, she was dining on goose and resolved to eat it on Michaelmas Day. Others followed suit.

Until next time, I’m Cassidy Cash, and I hope you learn something new about the bard.