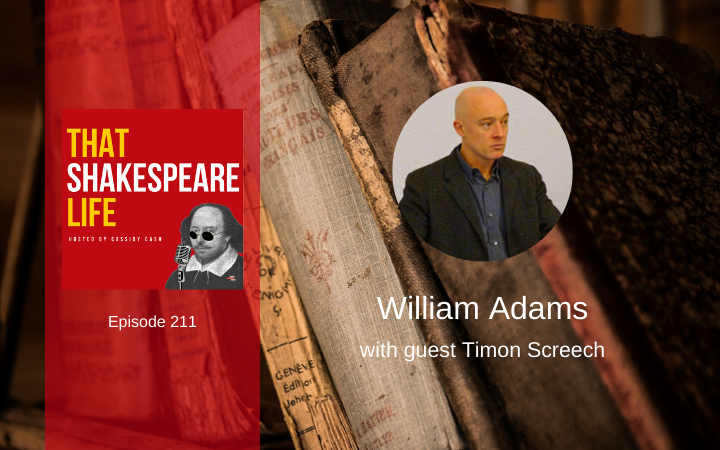 This website contains affiliate links. Support our work and help us continue the legacy of William Shakespeare by becoming a patron.

In the year 1600, when William Shakespeare was just 36 years old, William Adams became the first Englishman to reach Japan. Adams sailed as part of a 5-ship fleet employed for the expedition by a private Dutch company. Adams would serve in Japan under Shogun Tokugawa Ieyasu, helping to build the first Western Style ships in Japan, and later helping Japan establish trading factories with the Netherlands and England. While Adams held significant influence in Japan during his lifetime, what was most remarkable was the friendship he cultivated with Ieyasu that would last until Ieyasu’s death.

Here today to share with us the story of this incredible Englishman contemporary to Shakespeare is author of The Shogun’s Silver Telescope: God, Art and Money in the English Quest for Japan, Timon Screech.

Timon Screech taught the history of Japanese art at SOAS, University of London, for 30 years, before moving to the International Research Center for Japanese Studies (Nichibunken) in Kyoto, in 2021, as Professor of Japanese History. He has recently published The Shogun’s Silver Telescope: God, Art and Money in the English Quest for Japan (OUP, 2020) and Tokyo Before Tokyo: Power and Magic in the Shogun’s City of Edo (Reaktion /University of Chicago, 2020; available in Chinese translation). He is now completing a major monograph on the deification and cult of Tokugawa Ieyasu, as concurrently working a short book on early European contacts with the Kingdom of Lūchū (J: Ryūkyū), modern Okinawa. Screech is a Freeman of the City of London, and Fellow of the British Academy. See more information on Timon Screech, including a list of his other publications in the show notes of today’s episode.

I will be asking Timon Screech about:

Yates, Frances. The Occult Philosophy in the Elizabethan Age, Routledge 1979

Get the Detailed Show Notes! Here's what's inside this week: