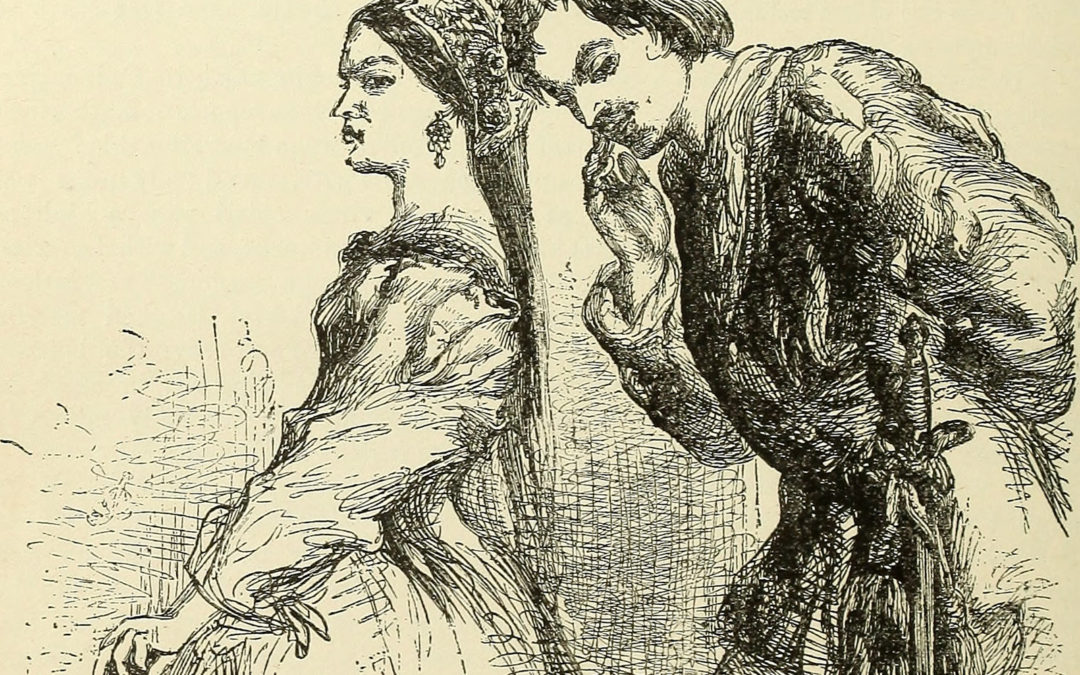 I have five reasons Shakespeare’s Dark Lady isn’t a lover.

I am going to outline three of my favorites and show you exactly why the passion Shakespeare expressed in his sonnets was not for a mysterious mistress, but instead for the theater itself.

(Note: I’ve put together a bonus resource at the end of this post that will outline two more sonnet examples that suggest Shakespeare’s dark lady is the theater. Be sure to check that out.)

Long have Shakespeare experts debated and fought over which black woman, dark skinned man, or something else entirely, was supposedly the Dark Lady of Shakespeare’s sonnets #127-154.

There’s even an extensive, and running, list of historical people some scholars want to hold up as “potential contenders” for the object of Shakespeare’s affection in these sonnets.

The works themselves represent some of the most explicitly sexual content we see from Shakespeare and while they do use words like love, lust, beauty, and desire to express obvious passion, the object of Shakespeare’s love and longing is not a person but a place.

Shakespeare’s Dark Lady is The Theater.

Reason #1: Shakespeare was in love with theater.

It is fun to conjecture about Shakespeare’s private life, particularly since know so little about him as a person. Sex sells and marketing is just as much of an obstacle for modern Shakespeareans as it is for any other business. So the questions of whether he was homosexual, had an illicit affair with some rogue woman, or was carrying on with a mistress out of town cloaked under the dark of night, all capture our collective attention to spur tantalizing conversation.

However, even from what little we know about Shakespeare, we know that his heart belonged to the stage. His truest love, and definitely the object of his life’s obsession, was the Theater.

Shakespeare and his playing company were young, talented, but not rich. When the lease ran out on their theater, Shakespeare organized a company of men to sneak onto the property in the dead of night and steal timbers of the theater, carry them across a river IN THE SNOW, to build The Globe theater on the opposite side of the Thames.

Who does that if they aren’t in love with theater?

Despite major setbacks in the business of being a dramatist, facing massive hurdles, he stayed with his chosen career path far longer than most men would have. That’s an example of what being passionate about something will motivate a man to accomplish.

The word “Will” is used no less than 30 times over the course of 27 sonnets. These sonnets are short, and words are his business. The inclusion of his own name in so many sonnets could not have been a coincidence. It appears as if the sonnets were not only love letters to his beloved Theater, but he even took the time to sign them personally.

Reason #2: Shakespeare wrote the sonnets when he was separated from the theater.

Whenever London was overrun by plague, the royals freaked out about it and closed places they felt would lead to spreading the disease. This included the theaters and playhouses. Now, plague overran London frequently as the 17th century was a generally unhygienic place to live, but most significant fights of plague wreaked their havoc, and closed theaters, in 1582, 1592, 1603 and 1607. This was right around the time Shakespeare was writing his sonnets, and his first quarto was published in 1609.

Why is that significant?

When you are separated from something you are passionate about and wanting to spend your life with, you get frustrated.

When Shakespeare was separated from the theater he still had to make money. The sonnets were fashionable and the theater was closed. What better way to keep your drive alive during the drought than to write love sonnets to your one true passion?

Reason #3: Poetry is about imagery, not literal expression.

As a dramatist and artist, Shakespeare was in a committed relationship to his patrons, bound dutifully to write what they would approve, to stage what would make it past the Master of the Revels and be requested at court. He produced plays, which Kings would enjoy and pay to have performed. He was good at his job, but it meant he wasn’t necessarily indulging his own creative ideas; he was instead applying his creativity for the satisfaction of others.

I think of how his play gave Charles VII the image of being this proud, capable King when in fact the man was a total lunatic, even going down in actual history as “Charles La Fou” (Charles the Mad). Shakespeare couldn’t of been ignorant of the fact that the actual King of France was only occasionally in possession of his own mind, but he painted fair the foul reality of Charles VII by using his Art to give Charles a “borrowed face” –which is a play on the costuming of the theater.

The mistress Shakespeare refers to as being his real creativity buried in the shadows beneath his personal commitments.

In another example of his poetic mind,

“Sland'ring creation with a false esteem:
Yet so they mourn becoming of their woe,
That every tongue says beauty should look so.”

He is calling attention to the fact that what his audience considered “beautiful” and “to be esteemed” does not concur with his definition of beautiful art and, as such, is in fact “False.”

His a narrative is contrived by the wants and desires of his audience.

I think sexual terms like lust, beauty, desire, and seduction all can be used to describe what drives a particular audience to want to see in a theater.

But what about the rival poet? You may cry in defiance. Wasn’t he worried about someone stealing his love?

How much do you know about artists, exactly? We all want the love of the Muse to light upon us and grant us our best work. Shakespeare is lamenting that the Muse has given her graces to another contemporary and the opportunity for such jealously was rampant.

Ben Jonson was not near the wordsmith that Shakespeare was, but he partnered with the famous architect, Indigo Jones, to produce what was perhaps the most amazing court masque ever held before or since.

History credits Shakespeare with envy over the success of the performance, having competed with masques for attention from the crown. Many of the stage elements, and even script elements that Jonson used for the masque that day would show up in several of the plays Shakespeare wrote after seeing that production. He was obviously jealous for the love of the creative muse, desiring that it was he, and not Jonson, who would be loved best, and thereby given the most success.

Shakespeare talks about “black wires in her head”

Instead of being a compliment to a woman, this line was instead a reference to a staging technique of suspending objects above the stage using wires and at the top of the stage is her “head.”

Shakespeare is using the language of the sonnets, the imagery of love and sex which while true to the art form and marketable in quarto form, was not talking about a person but instead his love, frustrations, passions, and pains with the Theater.

Shakespeare wasn’t having an affair, or an illicit relationship with anyone. He was writing sonnets when he really wanted to be in London performing plays but plague had him trapped outside the city doing whatever he could to make money in the undefined interim. The sonnets were an outlet to express his passion and pain.

Want two more reasons to believe the Dark Lady was really The Theater?

I found five reasons Shakespeare’s Dark Lady sonnets were really about the theater. These were three of my favorites.

If you would like to be thoroughly convinced, and armed with plenty of evidence that Shakespeare’s dark love was the stage, you can click below to access my short guide to Shakespeare’s Dark Lady.

I’ll show you inside the sonnets, with textual examples, exactly why the case for the missing Dark Lady of Shakespeare's Sonnets is closed.

5 Reasons Shakespeare's Mysterious Lover Isn't a Woman At All.

Well done! I just sent your your pdf guide to your inbox.