Did Shakespeare Carve a Pumpkin? 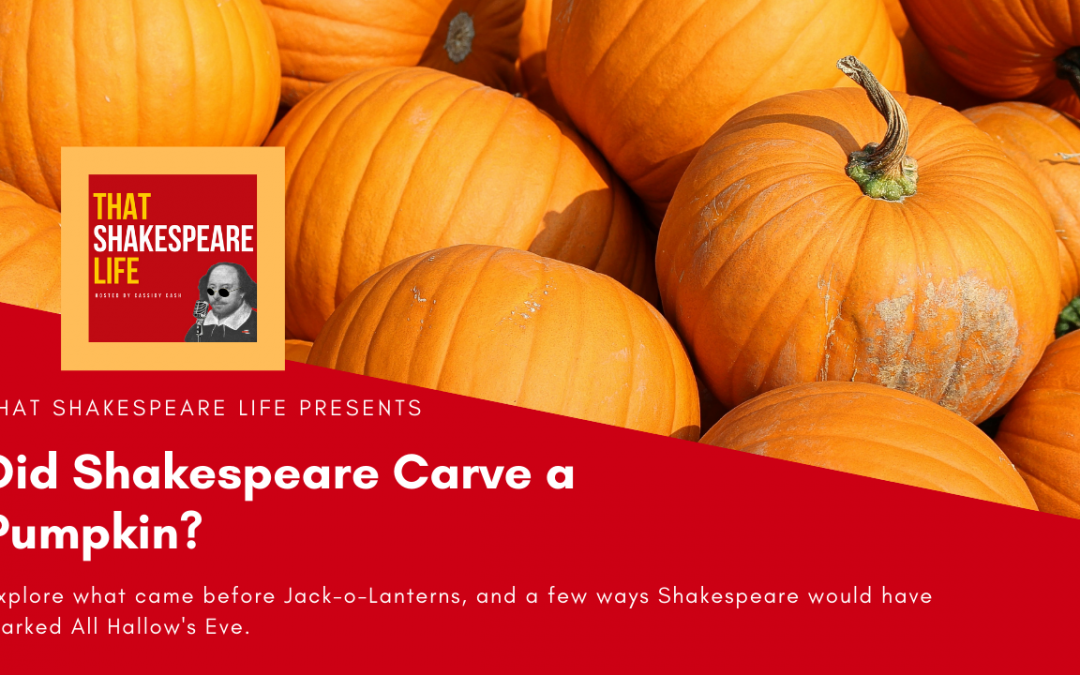 Halloween is right around the corner and that means pumpkins! Modern day carved pumpkins can trace their roots back to many 18-19th century legends about a man named Jack who tricked the Devil into buying him a drink and was forced to wander the Earth after death carrying only a small ember to light his way. That story has a different version depending on which country of origin you look for the story in, but it made me wonder about Shakespeare. Was there a 16th century legend about carved pumpkins? That’s why, this week, we are asking: Did Shakespeare Have A Jack-o-Lantern?

Let’s start off by setting the record straight to say that no, Shakespeare would not have had a Jack o Lantern, because that term does etymologically date to well after Shakespeare’s death by several centuries. However, the origins of the Jack o Lantern, and the tradition of carving up vegetables is much older than our 18-19th century doomed Jack. So what were the legends and superstitions about carving vegetables and warding off the evil spirits of October in Shakespeare’s lifetime? Here’s what I found out:

In the world there are several natural phenomenon that are attributed to the supernatural. These can be mysterious lights in the sky, or even just what we know today as phosphoresence, where substances glow because of their chemical make up, like diatoms in the sea. These things may seem normal to you now, but if you lived in a time before the reasons for these things had been determined, defined, and researched, it wasn’t unreasonable to attribute these lights and strange ideas to ghosts, spirits, and fairies.

We find fairies in several of Shakespeare’s plays, and they were more than just fun fiction to put in a story. These fairies had a basis of understanding in what’s known as folklore–the stories people tell about things that happened, but you cannot be sure which of the story is true, and which is not.

An 1882 oil painting of a will-o'-the-wisp by Arnold Böcklin. Source. Public Domain

One famous bit of uniquely British folklore related to the carved pumpkin is the will of the wisp. Before Jack o Lantern’s were carved pumpkins, lights outside at night were known as false fires, “ignis fatuus” in Latin, and commonly called will of the wisp in the 1670s as a local name for the phenomenon. While the 1670s, as the dictionary I used (Source) says this term will of the wisp dates from, is after Shakespeare’s lifetime, I wanted to go back further and see what Shakespeare would have called it.

Turns out, the idea of the will-o'-the-wisp phenomena being caused by natural gases can be found as early as 1596, as mentioned in the book Of Ghostes and Spirites, Walking by Night, And of Straunge Noyses, Crackes, and Sundrie forewarnings, which commonly happen before the death of men: Great Slaughters, and alterations of Kingdomes, by Ludwig Lavater, in the chapter titled “That many naturall things are taken to be ghoasts”:

So apparently, there were alot of lights moving across the land or sky at night, strange noises, and what Ludwig here calls “Sundrie forewarnings” that all together makes living, especially at night, in 16th century England a rather terrifying experience! But 1596 is right in the heart of Shakespeare’s lifetime and it is interesting to me that scientists were starting to try and connect these natural occurrences of random light with natural explanations. Ludwig writes,

“Many times candles & small fires appeare in the night, and seeme to runne up and downe… Sometime these fires goe alone in the night season, and put such as see them, as they travel by night, in great feare. But these things, and many such lyke have their naturall causes… Natural Philosophers write, that thicke exhilations aryse out of the earth, and are kindled. Mynes full of sulphur and brimstone, if the aire enter unto it, as it lyeth in the holes and veines of the earth, will kindle on fier, and strive to get out” 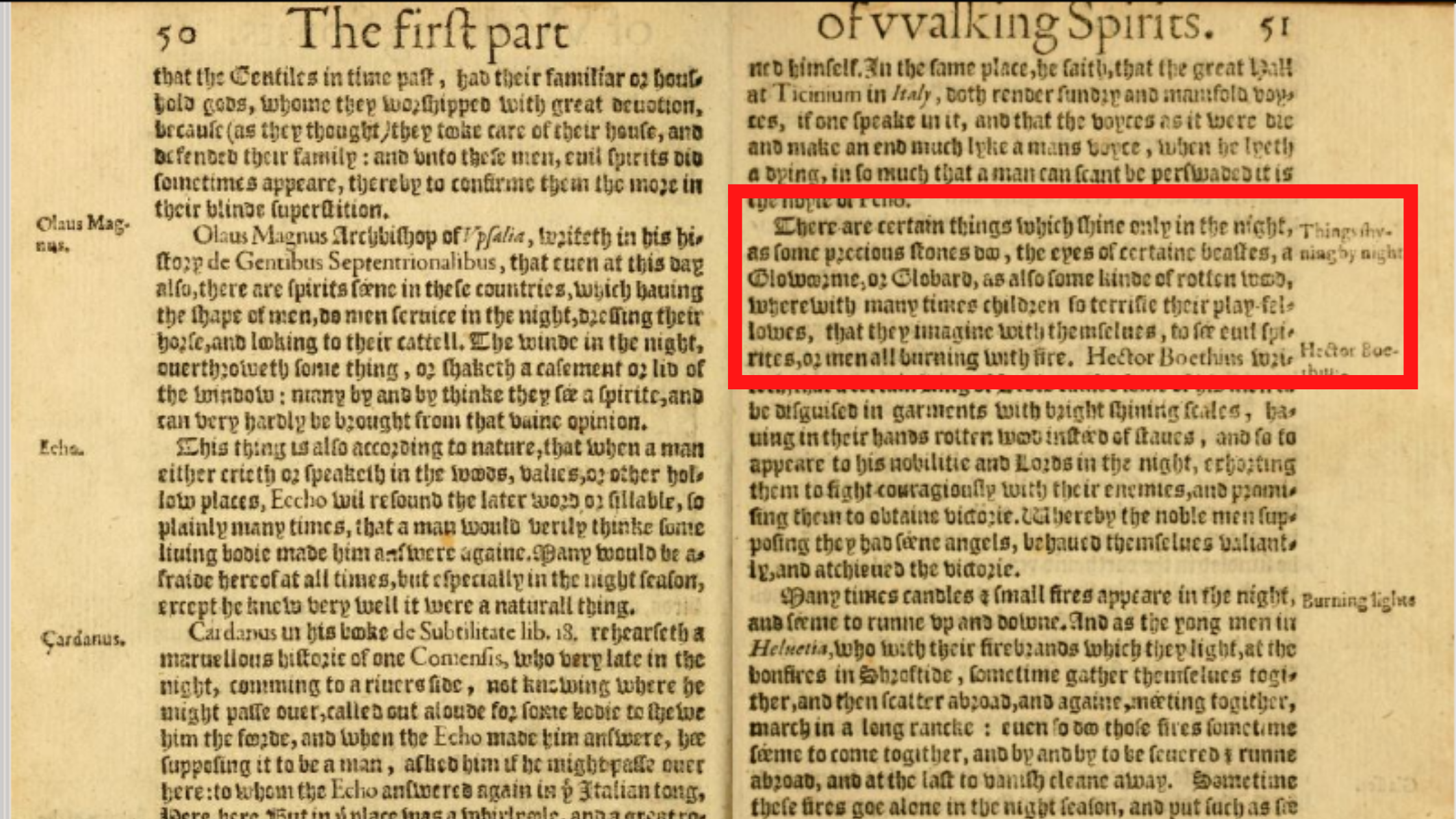 I took a screen capture of page 51 of Ludwig Lavatar's book, and highlighted the portion where he talks about the false fires. Shown highlighted here in red. You can read the original, and the entire rest of his book, online here. Public Domain.

It seems Shakespeare may or may not have celebrated All Hallow’s Eve with a carved vegetable, that particular tradition appears to have come into high fashion after Shakespeare’s lifetime, but he would have celebrated All hAllow’s eve with activities like mumming, (dressing up to tell folktales, involving ghosts or spirits), eating certain foods, and warding off evil spirits, fairies, and ghosts comes up frequently in Shakespeare’s plays like Titus Andronicus and Macbeth. (and Hamlet!)

RELATED EPISODE YOU MIGHT ENJOY: Was Hamlet a Christmas Play?

So would Shakespeare have carved a pumpkin? The answer this week is no, pumpkins were native to the Americas and carving them wasn’t a fashion for Shakespeare’s lifetime.

Would you like to know more about Shakespeare’s All Hallow’s Eve traditions, carving rutabagas, beets, and other vegetables in the 16th century or about the Irish Folklore that led to Jack o Lantern? If you are interested in these topics, please be sure to leave me a comment below to let me know that is something you would want to see a video about on the channel and then make sure you select the subscribe and notification bell so you do not miss that episode when it arrives.

That’s it for this week! I’m Cassidy Cash and I”ll see you next week!