Did Shakespeare Have a Canopy Bed? 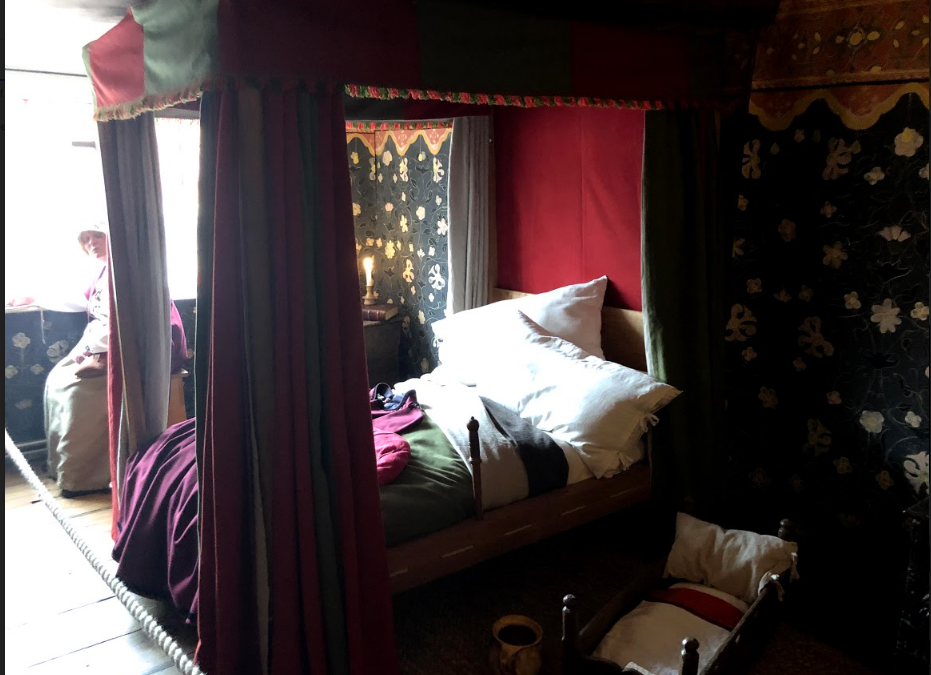 Canopy beds, with their flowing draperies, are today connected with the image of a princess, or a very fancy setup. There is a historical reason for connecting canopy beds with princesses, as it was the nobility in medieval Europe who thought up this beautiful, and as you will soon learn, very functional, piece of furniture.

To find out how long the canopy bed held in fashion for England, and exactly why it was that sleepers of times past started putting drapes over their beds in the first place, we are asking:

Did Shakespeare Have a Canopy Bed?

I love this topic so much because it is one of the few historical aspects of Shakespeare’s life we explore where I can provide you with a definite answer.

YES! Shakespeare did have a canopy bed! You can see at least three of them when you tour the Henley Street house in Stratford Upon Avon known as Shakespeare’s Birthplace.

But what is the history of this bed itself? And why did Shakespeare have them, when he didn’t live in the kind of drafting castle that medieval Europe was contending with as the canopy bed was first made up, so why did the style continue into 16th century England?

Here’s what I found out:

Canopy beds have been around for centuries, and as with so many artifacts of history had their official beginnings traced back to China. HOwever, when this style of bed found its’ first foothold in Europe it was because they were highly useful in the castles of medieval lords and ladies.

Castles were drafty places, and the concept of having “rooms” for people didn’t yet exist. Instead, the entire household–nobility and servants alike–would sleep in the Great Hall, presumably because that’s where the fire was located so it was most warm.

In order to provide a bit of privacy and separation from the servants sleeping next to you, Canopy Beds and the draperies hung about them provided a “room within a room” for those who used them. Due to the heaviness of the material, and the draftiness of the castle, the curtains also helped seal in the warmth and keep the sleeper cozy inside.

During Shakespeare’s lifetime, nobles in particular started constructing their homes and castles with specifically created bedchambers which were separate and cordoned off from the main part of the house. However, it was still a common practice to have your necessary servants sleep on palettes on the floor of the room, so the use of the canopy and drapes remained functional as a source of privacy even then.

Originally, the canopy was suspended from the ceiling, but later a frame was added to make it easier to use. During the 16th century is when ornate carvings started to be added in order to elevate the bed to a higher status symbol.

Looking a bit into the furniture from the 1500-1600 time period in England, I turned to my friend and Tudor furniture expert, Brigitte Webster. Brigitte and her husband Tom run Tudor and 17th Century Experience which is an immersive bed and breakfast setup in England that allows visitors to stay with them and experience what it was like to live in a home setup in the 17th century. Her home is complete with historical pieces, including a couple of beds from the 16-17th century. Interestingly, not all of the beds feature canopies.

This bed is from the 1500s and features the heavy draperies you will find on beds at Shakespeare’s Birthplace.

Then there’s also this bed, which still has a canopy but is much lighter.

And lastly, there’s this bed that dates to the 1600s, but does not have a canopy at all.

Shakespeare’s Birthplace and the beds there follow a similar pattern, with one bed featuring a heavy canopy, the second best bed has a somewhat lighter canopy, and then there is a small bed in another room with no canopy at all.

So while I’m uncertain why all the beds did not follow the same exact style, it makes sense to think that during Shakespeare’s lifetime, there were various fashions and styles to consider and not every household, or even every bed within the same household, ahd to follow the same setup.

That’s it for this week! I'll see you next Saturday with even more Shakespeare.

Don't forget to check out my friend, Brigitte Webster's Tudor and 17th Century Experience here. (not an affiliate link).