Did Shakespeare Have a Hand Gun?

When we think about Shakespeare and his plays, we rarely think of Good Old England as having weapons like guns. But the 16th century, and the reign of Queen Elizabeth I saw the old standard for England’s military,the longbow, be replaced by the new and more modern weapons of war: The firearm.

Guns are mentioned specifically in Shakspeare’s Romeo and Juliet, Henry VI Part II, Love’s Labour’s Lost, the Tempest and the poem Venus and Adonis. Which is why we are kicking off our series this month on Weapons in Shakespeare’s England by asking the question:

Did Shakespeare Have a Gun?

“Even as the wind is hush’d before it raineth,

Or as the wolf doth grin before he barketh,

Or as the berry breaks before it staineth,

His meaning struck her ere his words begun.”

This powerful line from Venus and Adonis not only strikes fear into our hearts about the meaning Shakespeare’s calling attention to for the tragic Venus and Adonis, but give evidence that William Shakespeare understood not only guns, but that they are fired with bullets. Both of these attributes were new weapons historically speaking for England, so let’s take a look at exactly what were the guns in and around where Shakespeare was living in the 16th and early 17th century.

These weapons were popular on board ships since they were capable of launching mortar rounds, balls, and explosive shells over the defensive walls of a fort from the ship while it was still at sea.

In addition to artillery shells, hand guns and specifically the pistol originated in the 16th century, as the first early handguns were produced in Europe. The English word “pistol” comes from the french, “pistolet” and was introduced around 1570 in England.

To introduce you to guns in Shakespeare’s England, here are five kinds of weapons which were in use in England when Shakespeare was a live. 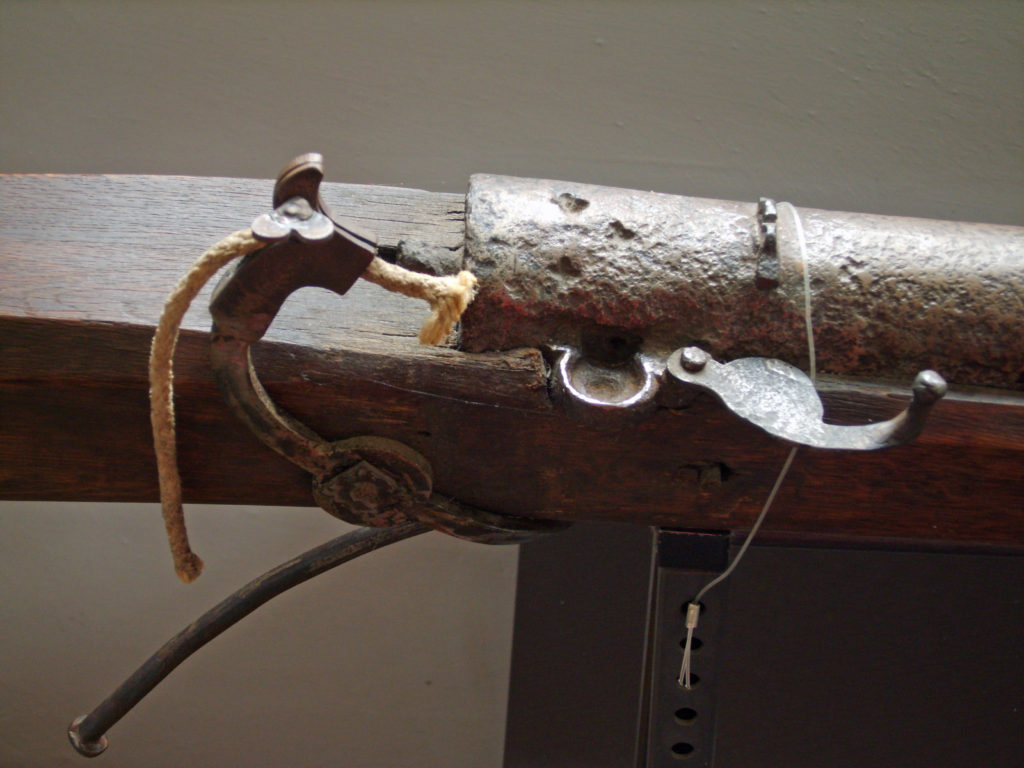 “Or like an overcharged gun, recoil
And turn the force of them upon thyself.”
Henry VI Part II, III.2

The matchlock was the first mechanism invented to facilitate the firing of a hand-held firearm. The classic European matchlock gun held a burning slow match in a clamp at the end of a small curved lever known as the serpentine. Upon the pulling of a lever (or in later models a trigger) protruding from the bottom of the gun and connected to the serpentine, the clamp dropped down, lowering the smoldering match into the flash pan and igniting the priming powder. The flash from the primer traveled through the touch hole igniting the main charge of propellant in the gun barrel. (Source)

On release of the lever or trigger, the spring-loaded serpentine would move in reverse to clear the pan. For obvious safety reasons the match would be removed before reloading of the gun. Both ends of the match were usually kept alight in case one end should be accidentally extinguished.

The exterior of a wheellock mechanism from a “puffer” or pistol of about 1580 (photo reversed). made in Augsburg in about 1580. The photo has been reversed in order to facilitate comparison with the interior view below. Author: Nick Michael CC BY SA 3.0 Source

Is that lead slow which is fired from a gun?
LLL III.1

The wheellock was the next major development in firearms technology after the matchlock and the first self-igniting firearm. Its name is from its rotating steel wheel to provide ignition. Developed in Europe around 1500, it was used alongside the matchlock.

The wheellock works by spinning a spring-loaded steel wheel against a piece of pyrite to generate intense sparks, which ignite gunpowder in a pan, which flashes through a small touchhole to ignite the main charge in the firearm’s barrel. The pyrite is clamped in vise jaws on a spring-loaded arm (or ‘dog’), which rests on the pan cover. When the trigger is pulled, the pan cover is opened, and the wheel is rotated, with the pyrite pressed into contact.

A close modern analogy of the wheellock mechanism is the operation of a cigarette lighter, where a toothed steel wheel is spun in contact with a piece of sparking material to ignite the liquid or gaseous fuel.

A wheellock firearm had the advantage that it can be instantly readied and fired even with one hand, in contrast to the then-common matchlock firearms, which must have a burning cord of slow match ready if the gun might be needed and demanded the operator’s full attention and two hands to operate. On the other hand, wheellock mechanisms were complex to make, making them relatively expensive. 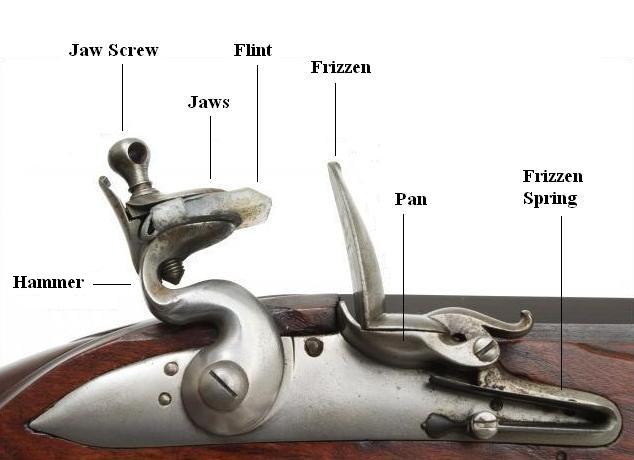 Shot from the deadly level of a gun,
Did murder her; as that name’s cursed hand
Murder’d her kinsman.

There were wit in this head, an ‘twould out;’
and so there is, but it lies as coldly in him as fire
in a flint, which will not show without knocking.

A flintlock is a general term for any firearm that uses a flint striking ignition mechanism. The term may also apply to a particular form of the mechanism itself, that was introduced in the early 17th century, and rapidly replaced earlier firearm-ignition technologies, such as the matchlock and the wheellock.

Flintlock pistols were used as self-defense weapons and as a military arm. Their effective range was short, and they were frequently used as an adjunct to a sword or cutlass. Pistols were usually smoothbore although some rifled pistols were produced. (Source)

Flintlock pistols came in a variety of sizes and styles which often overlap and are not well defined, many of the names we use having been applied by collectors and dealers long after the pistols were obsolete. The smallest were less than 15 cm (5.9 inches) long and the largest were over 51 cm (20 inches). 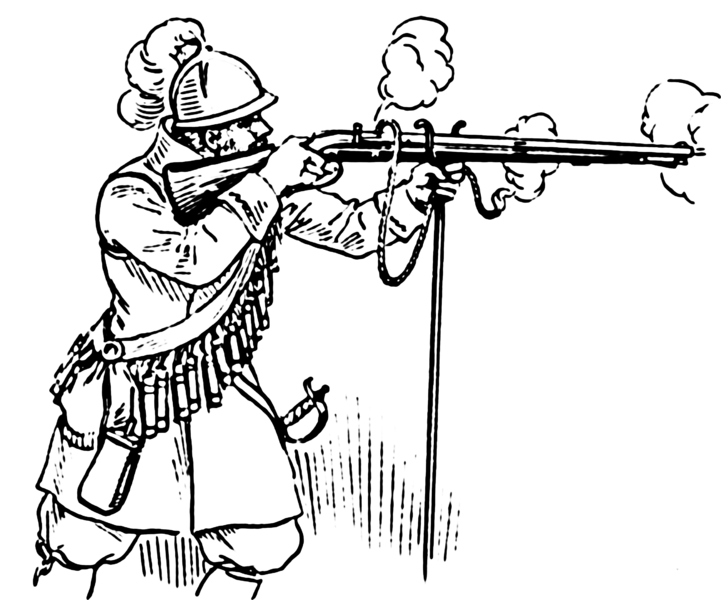 Archives of Pearson Scott Foresman donated to the Wikimedia Foundation This file has been extracted from another file:PSF H-420010.png My original source is here.

All things in common nature should produce
Without sweat or endeavour: treason, felony,
Sword, pike, knife, gun, or need of any engine,
Would I not have; but nature should bring forth,
Of its own kind, all foison, all abundance,
To feed my innocent people.

This weapon is a type of long gun that showed up in the 15th century. Although the term arquebus was applied to many different forms of firearms from the 15th to 17th centuries, it originally referred to ” a hand gun with a hook-like projection or lug on its under surface, useful for steadying it against battlements or other objects when firing.” These “hook guns” were in their earliest forms defensive weapons mounted on German city walls in the early 1400s, but by the late 1400s had become handheld firearms. The development of the arquebus is somewhat tied to technology developed for the crossbow as without the stock from the crossbow, the arquebus would not have a stable platform to rest one’s shoulder on. Priming pans also were placed on the arquebus. A matchlock mechanism was added around 1475 and it became the first firearm with a trigger. Source

“That drive thee from the sportive court, where thou
Wast shot at with fair eyes, to be the mark
Of smoky muskets?”

During the siege of Parma in 1521, many Spanish soldiers reportedly used an “arquebus with rest”, a weapon much larger and more powerful than the regular arquebus. These weapons were really good at defending fortresses, castles, and other locations where a large wall was the main defense.

The arquebus and musket had subtle differences, and often the two terms are used interchangably. It seems that a musket was a child of the arquebus, but not all examples of an arquebus would qualify as a musket.

They started out as sporting weapons but we do know that by 1611, Denmark was using them as military weapons.

These are just a few examples of the kinds of guns that were being used in England when Shakespeare was alive, and the kinds of hand guns he had in mind as he wrote these famous lines from his plays.

That’s it for this week! I’m Cassidy Cash and I hope you learn something new about the bard.

Sources and Places to Learn More: