Did Shakespeare Have Corn? 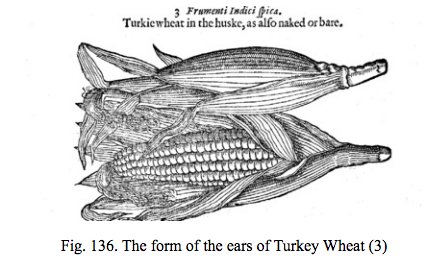 In the 16th century, the word “corn” applied to any plant which produced a seed that could be harvested and then turned into breads, cereals, and other flours for baking food items and even the most popular beverage in England, ale, which was safer to drink than water during Shakespeare’s lifetime.

Across Europe linguistically we see the word “corn” applied to everything from oats in Scotland–“wheat” in England, and even barley in other parts of Europe during Shakespeare’s lifetime.

So when we see the play Coriolanus which Shakespeare wrote around 1608 during what’s known historically as “the corn famine” what kind of plant are they referring to when the citizens open the play with a riot over corn?

Let’s find out in this episode as we ask “Did Shakespeare have corn?”

Corn as we think of it today is historically thought to have been first brought to Europe in the 15th century after Columbus discovered in what is now the United States.

In Europe they had seed bearing plants which look like corn like wheat, barley, and oats, but they did not have what native Americans called “maize” so European colonists used words they were familiar with to understand and describe this new grain.

Wheat and corn were used interchangeably to describe a variety of grains, and corn was considered “turkey” wheat for the same reason and the same time period that the bird we know as a “turkey” was also introduced to Europe–they came to be thusly known by that monicker because they were transported through the Ottoman Empire, or Turkey the country.

Then in 1608, torrential rains wiped out most of the agriculture crops in England, leaving a shortage on any kind of corn, wheat, barley, or oats. The price of items which depended on grain, like ale and bread, skyrocketed. As the prices rose, so did the stockpile of these items by the wealthy. Official proclamations and even sermons decried hoarding practices, but hoarding only served to drive prices of basic food items even higher, leading to open rebellion among the people of England.

The country saw at least 40 food riots between 1586 and 1631, and the opening scene of Shakespeare’s Coriolanus, written around 1608 specifically depicts just such a riot. While Shakespeare’s play was based on Plutarch’s version of a story by the same name, Shakespeare’s opening scene is completely unique to the bard, reflecting what he himself was experiencing in real life.

Citizens of 1608 London really were taking to the streets to give outcry over the lack of food, the high prices of the stores which remained, and as Shakespeare’s play attests “the gods sent not Corn for the rich men only (I.1)”

So the answer this week is YEs, Shakespeare did have corn during his lifetime.

If you love the Shakespeare history we present here each week, then I hope you’ll enjoy Experience Shakespeare, a members-only series of Shakespeare history activities that work like science lab, for history. Along with monthly kits delivered via email, you also get access to our entire library of printable history resources.
Learn more & Sign Up Now at www.cassidycash.com/experience

That’s it for this week, I’m Cassidy Cash, and I hope you learn something new about the bard.