Did Shakespeare Use a Drinking Glass? 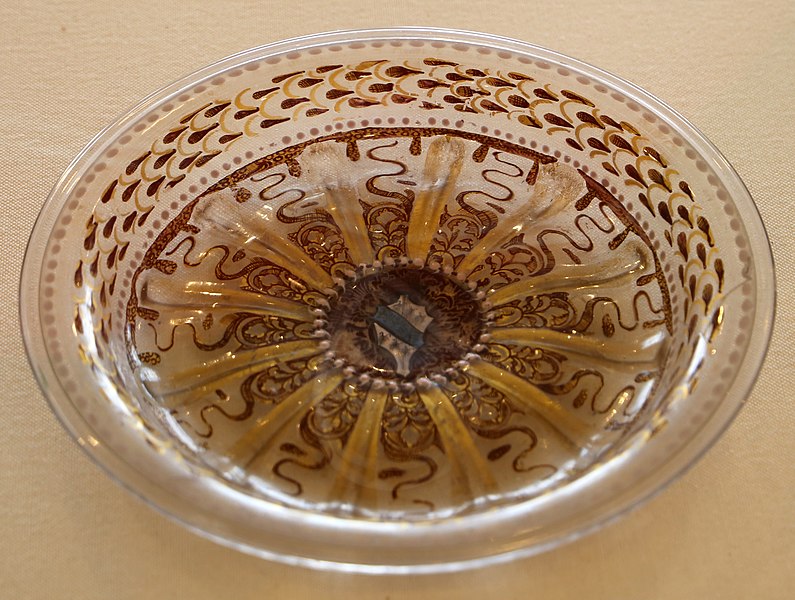 It seems that while glass has existed for centuries before William Shakespeare, the use of it for what museum archivists call “vessel glass”, or colloquially the drinking glass is a fuzzy subject for 16th century England. When Shakespeare went down to the pub for a pint, did he use a glass the way we think of them today? I wanted to find out, so today we are asking: Did Shakespeare Use a Drinking Glass?
Then learn this of me: to have is to have; for it is a figure in rhetoric that drink, being pour’d out of cup into a glass, by filling the one doth empty the other
Touchstone

Historians have not given much attention to the vessel glassware of 16th century England, but here’s what I was able to uncover: Glass was a big industry in England since the Middle Ages, but it was used primarily for church windows (and I’m going to assume windows of houses as well, but that’s a subject for another investigation). As a result, while crafting this material into a vessel for drinking liquids was in existence during Shakespeare’s lifetime, it seems doubtful he would have used one, at least not regularly. There were two types of glass manufacturing that were in development in England during Shakespeare’s lifetime. The German way and the Italian Way. The German Way relied on wood and potash to form the glass, and while their biggest production was window glass, they also created several drinking vessels of varying shape and decoration. The most popular design was a tumbler which was often decorated with notches or circles drawn into the glass. This German method of production was pushed out of favor around 1608 when England became concerned about deforestation. Because the German production method relied heavily on the use of burning wood, it was replaced by the more forest-friendly Italian approach. In fact, by 1615, using wood to produce glass in factories was flatly outlawed. The international Venetian style arrived in England with the immigaration of Italian craftsmen (you’ve seen this theme before in swords and fight masters who also came primarily from Italy to England during this time period).
Glasses, glasses, is the only drinking
Falstaff 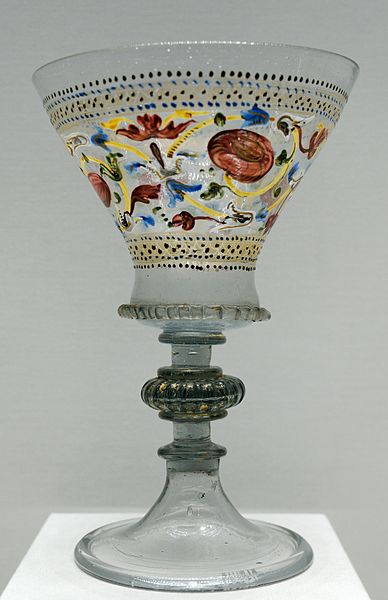 The 16th century was the golden age for Venetian glassmaking in Murano.At least 28 glassmaking furnaces were in Murano in 1581. Collectors of Murano glass included Henry VIII of England, Pope Clement VII, King Ferdinand of Hungary, Francis I of France, and Phillip II of Spain.

Another word for this Italian glass was “crystalline” which Shakespeare uses in his play Cymbeline to describe the material out of which Jupiter builds his palace. (Act V Scene 4) FUN FACT: There’s a real Cymbeline Castle location in England.

Glass history (yes that’s a real area of history) credits English glass merchant George Ravenscroft with the creation of the “Crystal” as we know it today– a clear glass he called crystalline—but it was not stable. Three years later, in 1676, he improved this glass by adding lead oxide, and lead glass (a.k.a. crystal) was created. This late 17th century version of crystal glass is the “crystal” as we think of it today, but the term applied to glass creations during Shakespeare’s lifetime as well, and it was during Shakespeare’s lifetime that the word “Crystal” came to prominence.

Despite lead glass not being created until the late 17th century, the mineral has been called “crystal” since Anglo-Saxon times; it was regarded by the ancients as a sort of petrified ice. And the word “Crystal” was used As a shortened form of crystal-glass dates from 1590s. It was used As an adjective, from late 14c.

So Shakespeare has some precedence for including it in his plays, that could date back to any number of the very old history sources he is known to have used when writing his works, but intriguingly, a fascination with glass, and specifically the Italian glass, also appears to be a slice of Shakespeare’s contemporary culture as well.

Which his own will shall have desire to drink: It may be good: pride hath no other glass To show itself but pride, for supple knees Feed arrogance and are the proud man’s fees.
Ulysses 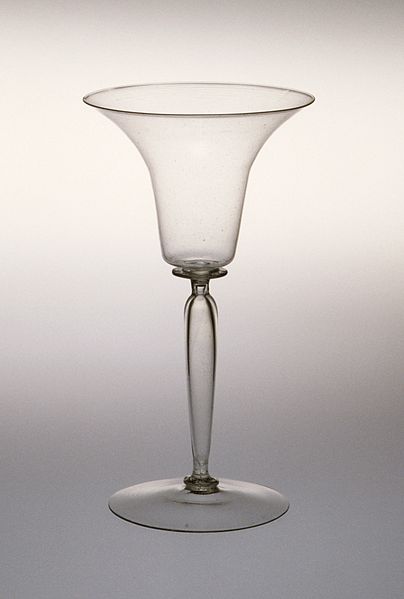 Well, we know that Shakespeare likely did not eat Breakfast the way think of it today, instead skipping straight to a midday meal. So while the bard did not drink his morning orange juice in a glass like mine, he may have drank whiskey or ale from a glass. The story of whiskey drinking vessels starts in the 16th Century, with a wooden cup. These small wooden cups were used to drink Scotch whiskey, and they slowly began to change. During the 1500s, the only cup used to drink whiskey was known as a quiach, which was derived from ‘cuach’ – a Gaelic word that simply meant ‘cup’. The design looked a lot like a shallow bowl, and it was constructed from wooden staves and had small handles on both sides.
I drink to the general joy o’ the whole table,
Macbeth 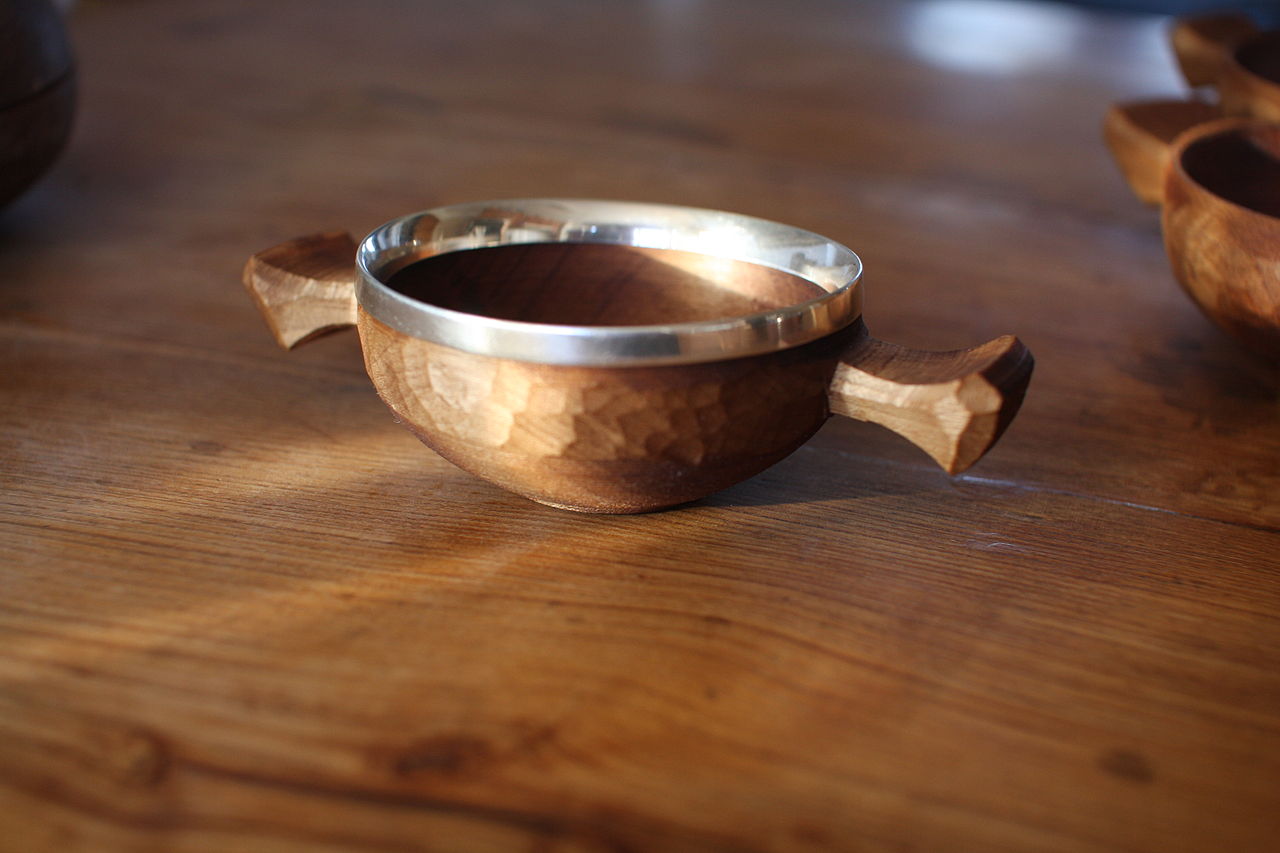 Example of a Scottish Quaiche by Robin Wood. maple and silver. Source

At this point, different craftsmen started to create different styles of quiach, slowly changing the style of the handles and, over time, changing the form of the glass entirely. Eventually, craftsmen would use lighter and darker woods, which created patterns on the cups, and eventually, they began embellishing the cups with silver. Every craftsmen would create something totally unique, in an attempt to capture the imagination of those who bought and used the quiaches.

The silver quiaches were eventually engraved with patterns, and in some instances even designed to replicate the appearance of wood. The bowls became statement pieces, and played an important role in the social gatherings that usually accompanied whiskey drinking. During the 17th Century, a “quiachfull” of whiskey –enough for one gulp ­– was served once at the beginning of a social event, and once at the end. Source

Suprisingly, this quaiche that was used in Scotland for whiskey was, in England, the design of the low bowls used for bleeding a patient for illness.

Traditionally quaichs are made of wood, an artform known as “treen”. Some early quaichs are stave-built like barrels and some have alternating light and dark staves. The staves are held together by bands of willow or silver. They generally have two, and more rarely three or four, short, projecting handles. Other wooden quaiches were lathe-turned out of a single piece of wood and there was another group which were turned then carved outside in basket-weave pattern. In addition to wood, they are made of stone, brass, pewter, horn, and silver. The latter were often engraved with lines and bands in imitation of the staves and hoops of the wooden quaichs. (Source)

So it seems that while glass vessels, and even glass drinking vessels were in existence during Shakespeare’s lifetime, it is far more probable that the bard used a wooden (or perhaps leather?) drinking cup whenever he enjoyed a dram of ale, and not a glass one.

GET SHAKESPEARE HISTORY DELIVERED
Sign up for the free email newsletter and have the latest content delivered right to your inbox every Monday. I’ll send you this free Hand Illustrated Diagram of the Globe theater to welcome you.