Did Shakespeare Use a Gauntlet? 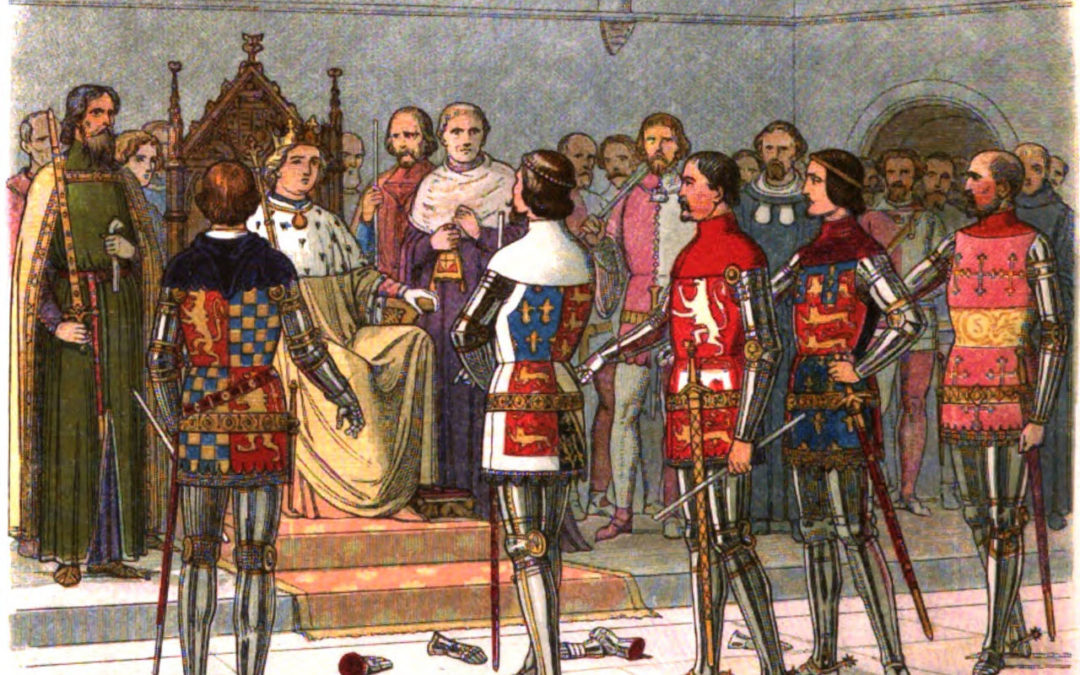 When I started researching this weapon, the Gauntlet, I thought I was looking up the expression “run the gauntlet” which is a military punishment for soldiers. However, while it does apply to that term, I discovered that it also applies to the 16th century glove and possibly metal armor elbow patches as well. Here’s what I found out:

Attendants with foils and gauntlets.

Obviously, they aren’t carrying a military punishment method, so it has to be something else.

Their thimbles into armed gauntlets change,

Their needles to lances, and their gentle hearts

To fierce and bloody inclination.

All of these sound completely different from the “run the gauntlet” expression I was expecting to find. Alas, there may be less French to this term than I had hoped, but let’s explore.

Just to set the record straight “run the gauntlet” did exist in the 16th century.

To run the gauntlet is to take part in a form of punishment in which the party judged guilty is forced to run between two rows of people who strike him with various objects as he runs. The goal being to get to the end. 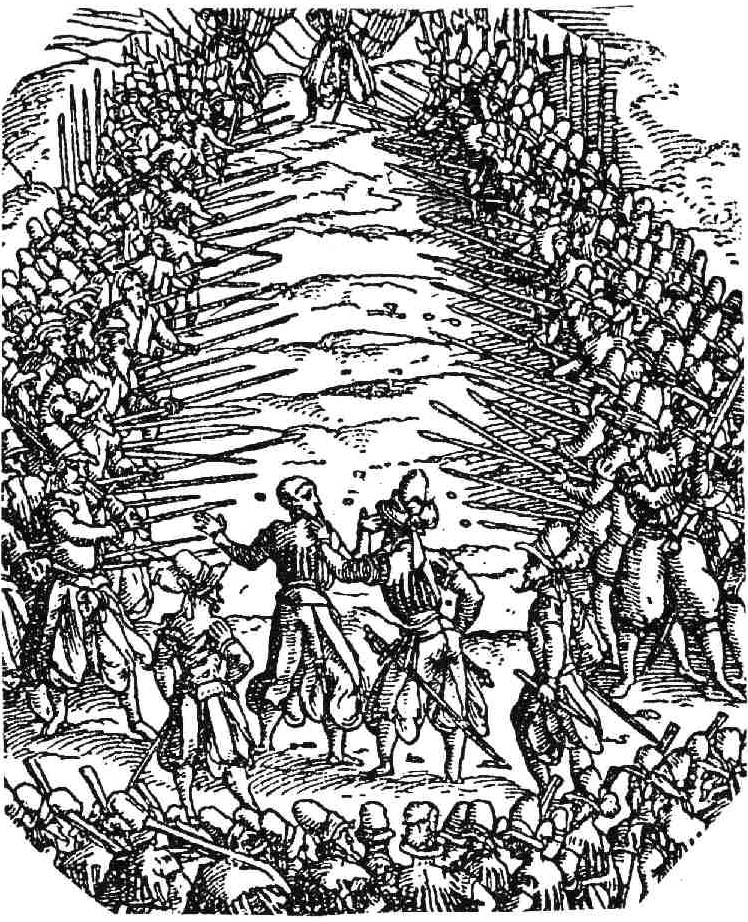 An example of what it looked like to “run the Gauntlet” is this 16th century engraving “Spiessgasse” (pike-alley), from the Frundsberger War Book of Jost Amman, 1525 Source

Even though I was able to find what appears to be a woodcut image from 1525 that demonstrates a gauntlet, the engraving comes from a Swiss-German artist, and the practice (or at least the phrase describing the practice) seems to have originated in Sweden, not England. Etymological records indicate the phrase itself did not come to England until the 17th century, which means while people may have lined up to pummel others as punishment in England during Shakespeare’s lifetime, this usage of the word “gauntlet” to describe that practice probably post-dated Shakespeare, which means it isn’t what he’s talking about when he uses the term in his plays.

So when the bard was writing all of these references to “gauntlet” and especially that one from Henry IV part 2 which pretty clearly indicates a glove, what was he talking about? He was talking about a piece of armor.

While the term “gaunlet” can be applied to the metal coverings of the elbow joint in a suit of armor, those are almost always called “elbow gauntlets” the term “gauntlet” by itself describes the metal gloves a solider wore into battle.

A hold over from medieval history, the gauntlet came to represent a universal call to arms. Thus, when the stage directions in Henry IV Part 3 tells the actor to throw down his gauntlet, that is done because the Marquess of Montague (not the same Montague as Romeo and Juliet) is indicating he is challenging anyone there to a fight. You see this in the line immediately preceding these stage directions when the Marquess says

“And whosoe’er gainsays King Edward’s right, By this I challenge him to single fight.”

Curiously, throwing down one’s glove as a challenge to an opponent that you are ready to fight them persists into the 20th century, with it appearing in several films, and even some Warner Brothers cartoons.

Bugs Bunny and Yosemite Sam in “Hare Trimmed” from 1953, Directed by Friz Freleng. The part where the pair “throw down their gauntlets” happens at 2:35. Source.

In the 1953 classic, Hare Trimmed, directed by Friz Freleng, Yosemite Sam and Bugs Bunny get in a fight and Sam takes out a glove to slap Bugs with it as a challenge to Bugs to fight him. Bugs responds by slapping Sam with a glove (filled with a brick) in a slap stick approach to throwing down the gauntlet.

So while it was born of Tudor tradition, to throw your armored glove to the floor, as a signal that you are challenging someone to a fight, this would become a throwing down of your glove as society moved past regularly having an armored version on their person.

To understand what’s happening on stage for Shakespeare here, we need to understand a bit about a Marquess. 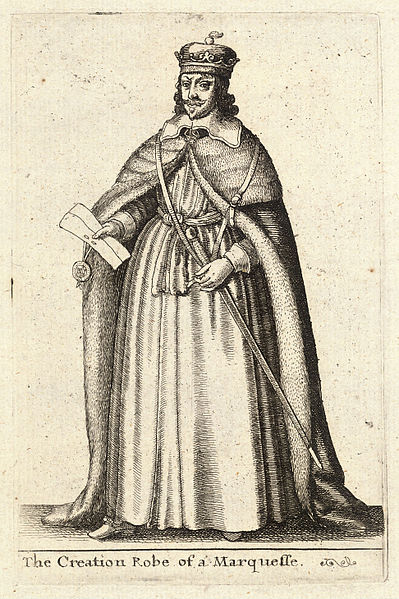 Because their lands were usually border lands, it was the marquess’ job to defend the country. The official dress of the Marquess, however, doesn’t mean he was walking around in full armour. In this scene from Shakespeare’s play, the dialogue specifically draws attention to the Marquess arriving in armor as a departure from what is normal when King Edward IV welcomes him, but then asks him, Welcome, Sir John! But why come you in arms?”

So that’s why in this scene, the Marquess can throw down the gauntlet, and the stage directions do not have an attendant bring it to him like what happens in Hamlet Act V during the duel with Laertes, the stage directions have attendants set the scene by walking on with the “foils” that’s the swords, and the “gauntlets” (that’s the battle gloves) and the flagons of wine. A flagon being a large container for drinks, usually wine. 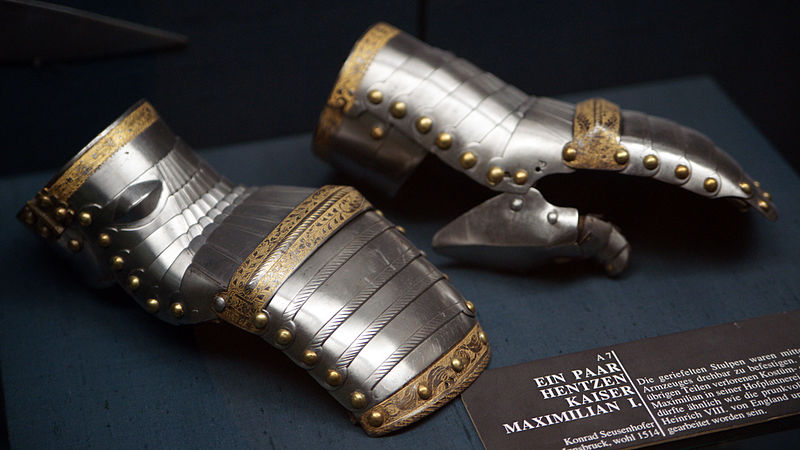 Konrad Seusenhofer, Innsbruck English. Gauntlets of Emperor Maximilian I. circa 1514. You can see where they look much more like metal mittens than the finger-featured gauntlet type glove style shown below. 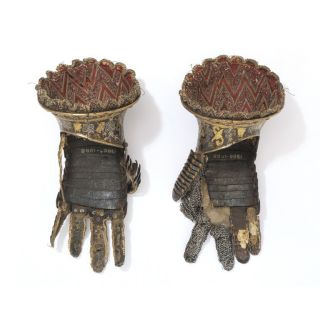 These gauntlets, or gloves, are made of steel damascened with a design of military trophies, palm branches and wreaths, referring to their military use. The technique of damascening uses gold or silver to decorate a base metal such as iron or brass. After a design is traced over on the object, a hammer and punch is used to push gold or silver wire into prepared channels on the base metal surface.

These gauntlets are thought to be part of a set of three suits of armour made for the sons of Philip III of Spain (1609-1641). Very grand, costly armour was part of the equipment for a prince or noble of this period. This suit used gold and silver as well as a beautiful crimson silk lining with gold and silver embroidery.”

So they were, as they are described in Henry IV Part 2, both “scaly” and having “joints of steel” During the 16th centnury, they were developed far enough that a soldier could be quite dextrous with them able to move much more nimbly with their fingers than the 15th centnury version.

One historian described the gauntlet as
by the 16th century when someone threw down the gauntlet there was no denying the significance of the act; more than just a protective armour, the gauntlet was literally regarded as the hand of war. SOURCE

So for Shakespeare, and the references in his plays, the “gauntlet” was a military glove, and an actual piece of armor, but was used most often as a symbol much like the opposite purpose of a white flag indicating surrender, the gauntlet was intended as a clear and undeniable symbol of one’s intention to fight.

Whether you are writing a book, working on a project, or just find this topic fascinating, you can get my entire list of 20 resources on Shakespeare and the Gauntlet by joining the email newsletter. Use this form to add your email, and you will be immediately directed to the complete list of resources. The list is my gift to you, even if you unsubscribe later. But I do hope you’ll stick around for more Shakespeare!