Did Shakespeare Use A Toothbrush?

Toothbrush c. 1795, supposedly used by Napoleon Bonaparte. This toothbrush with a silver gilt handle was made for Emperor Napoleon Bonaparte (1769-1821) of France. The Chinese are credited with inventing the use of toothbrushes and toothpastes, although the ancient Egyptians used branches with frayed ends to clean their teeth. In the West, the use of toothbrushes began to be promoted by French dentists in the late 17th and early 18th centuries. It belonged to the collection of Henry Wellcome.Science Museum London. Source

It seems that as long as people have had teeth, they have been concerned with caring for them. But the technology for exactly how to brush and clean your teeth has evolved over the years as humankind tried things, failed at things, and invented new things. So what we do know is that oral care and dentistry existed for William Shakespeare, but what did Shakespeare use for oral hygiene? To find out, this week we are asking: Did Shakespeare use a toothbrush?
Well, the best is, she hath no teeth to bite.
Launce

The first “toothbrush” (with bristles) was invented in China and was made of animal bone, bamboo and hog hair. The bristles were very hard. The first “toothbrush” as we think of them today was invented in England, but not until well after Shakespeare. A man named William Addis was in prison when he decided to take care of his teeth and using instruments available to him there, he concocted a toothbrush out of cattle bone and is generally regarded as the father of the modern toothbrush. Now that’s a large jump between Chinese bristles of bone and hog hair up to the 18th century and William Addis coming up with tooth care in prison, so what happened in between?

A Brief History of Teeth Care

The first tooth brush that was made with bristles and held sideways to scrape gunk off your teeth came from China in 1498. There was one in Spain and France which looked more like a paintbrush recorded in 1590. I was unable to find a source that could tell me for certain whether this design had made it to England during this same time. (Source)

During the latter part of Shakespeare's lifetime (early 17th century) through until the 18th century, toothbrushes were–like almost all the “new” items of the day–almost exclusively luxury items. While we have records of some which were made from gold, silver, and other luxury items, these toothbrushes (teethbrushes?) were considered show off objects for flaunting one's wealth, as opposed to anything really practical. It certainly wasn't something people used with regularity. Though we can tell that by the 18th century one dentist (considered the Father of Modern Dentistry) Pierre Fauchard, told people that using a cloth was much preferred over the bristles made of horse hair, as bristles could damage teeth. So if his recommendation is any indication, if the bristled toothbrush was around in Shakespeare's lifetime, its popularity as a dental hygienic item would not arrive until much later.

I was able to find that science was hot with exploration into teeth even at a microscopic level during the 17th century. Though it did happen after Shakespeare died, it's tantalizingly close: In 1683, Antoni van Leeuwenhoek, Holland’s father of microbial biology, observed microscopic biofilm bacteria gathered from the scruff of teeth. Poor Dr. Leeuwenhoek, however, seems to have been a member of a signficant minority.

So Would Shakespeare have used a toothbrush? Probably not, no. They were there, but they were very much on the fringe of society type items and mainly novelties for those who did own them, instead of functional pieces of dental care.

So what did Shakespeare use? Here are a few options:

Just like it sounds, this was a paste made from sugar that people slathered all over their teeth thinking it would clean them. Since sand remains a common ingredient in toothpastes even today, I can follow their reasoning that the granulated sugar might bring the abrasive cleansing they would want, unfortunately, the sugar also eats away at the enamel and caused severe decay.

Sugar being a super expensive item in Shakespeare's lifetime, it was only the wealthy who had sugar paste avialable to them, resulting in the curious phenomenon that the poorer of England actually had better teeth. Modern historians attribute this fact to the lack of sugar in the diet of the poorer classes. (Source)

This obsession with sugar for Tudor aristocracy lead to a teeth killing combination of poor diet and horrible oral hygeine. By the time she was in her early fifties her teeth had almost all turned black and fallen out.

The Queen was such a trendsetter, however, that when her teeth did rot out of her head, that look caught on and many aristocratic girls and women started staining their own teeth with soot and anything else that would turn them black to follow the fashion set by Elizabeth. (Source)

A chewstick is what it sounds like: It is a small, pliable piece of a stick or twig from a tree or small plant that a person chews on for the purpose of cleaning their teeth. It works like some of the chewing gums we have today in that the act of chewing can clean your teeth. In China, they treated the branches with various oils like peppermint to also freshen the breath.

In England for Shakespeare’s lifetime, the exploration to India and the establishment of the East India Trading Company, brought European colonizers into contact with a particular kind of chewstick plant called Neem. It was notable to Indian farmers because during outbreaks of locust plagues, the Neem plant would survive, being left alone by the locust, indicating it repelled the insect. It became popular as a chewstick for it’s insecticidal properties, though the chemical and scientific understanding of why this plant was effective would not be fully known until the 1960s. (Source)

Nasty as this may sound today, it was not uncommon during Shakespeare’s lifetime for someone to simply use their finger to clean their teeth by rubbing their finger around in their mouth to remove debris. While not fully effective, this method did at least clean on a basic level.

A sponge or cloth

Probably the most likely contender in my opinion for what William Shakespeare would have used to clean his own teeth (and there’s plenty of evidence to suggest oral hygiene wasn’t a primary concern for Shakespeare) but if he did clean his teeth, it was probably with a sponge or cloth. The same way you might clean your body, or wash your car, a piece of linen was used in 16-17th century England to rub off the gunk in one’s mouth to try and remove food and freshen breath. So it seems along with dirty streets, and a lack of bathing, nasty breath was also pretty commonplace during Shakespeare’s lifetime.

Those are all the ways I found to clean teeth during Shakespeare’s lifetime. Do you know of more? Share your thoughts in the comments below!

If you like this video, please hit like and subscribe. Don’t forget that notification bell if you want to be notified on YouTube about new episodes. To dive even further into the history of oral hygiene in Shakespeare’s lifetime, you can check out the show notes for today’s episode. While you are there, sign up for the newsletter! Not only will you get illustrated history guides to the life of William Shakespeare completely free, but you’ll also have new episodes delivered right to your inbox every Saturday so you never miss an episode.

That’s it for this week! I’m Cassidy Cash, and I hope you learn something new about the bard. I’ll see you next week! 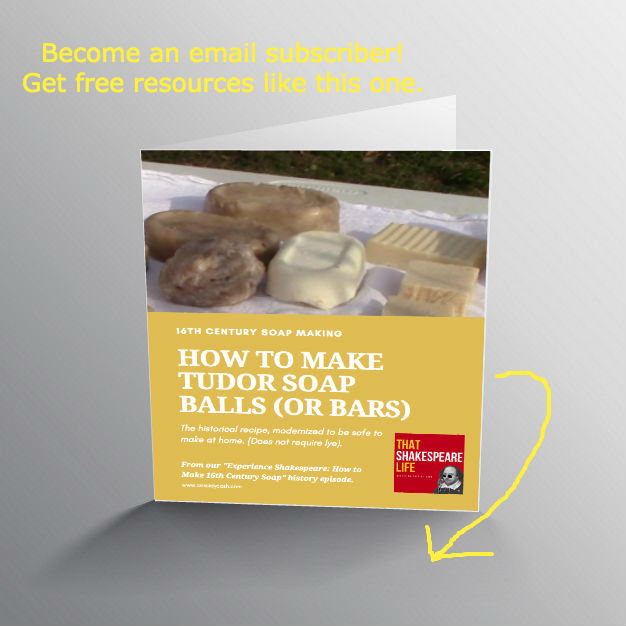 MAKE YOUR OWN TUDOR SOAP BALLS

Try out a piece of Shakespeare's history for yourself! You can make your very own Tudor soap balls, which would have been used along with those batyldores we mentioned in today's episode for cleaning your linens in the 16th century. You can download a recipe for making your own when you sign up to our email updates about That Shakespeare Life.