Did Shakespeare Write About the Sphinx? 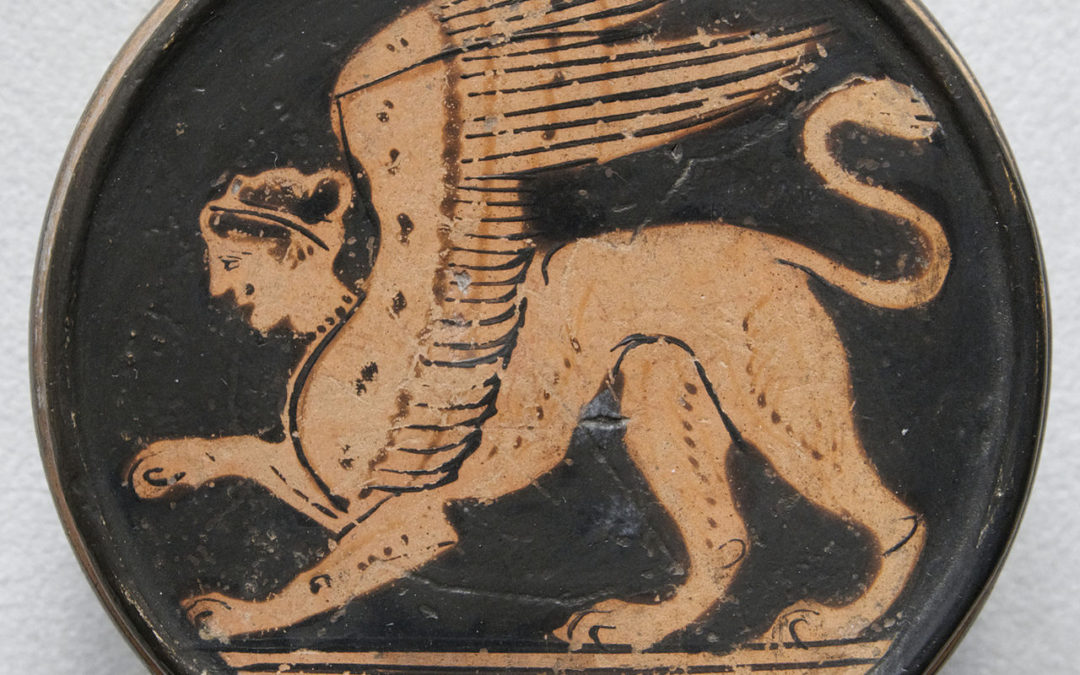 Sphinx. Attic red-figure pyxis, 2nd half of the 5th century BC. From Nola (Italy). Source

William Shakespeare only uses the word “Sphinx” in one single line, in one single play, (that I could find), but he references several wreathed-up snakes and puzzled Egyptians. Some of these references reveal what the pop culture opinion of Egypt and the Sphinx was for the 16-17th century in England, and others show Shakespeare was an avid fan of Greek tragedy.

If you like Shakespeare history behind the plays, consider subscribing as we have new videos every Saturday.

Influence of Ovid and other Greek Tragedians

Instead, the universal understanding of the Sphinx comes from the story of Oedipus. For Shakespeare, he could have consulted Sophocles, Euripides, or even Homer, and each writers as the story play out a little differently.

It is in the telling of the story of Oedipus that I note an influence on Shakespeare’s stories, despite there being only one mention of the word “Sphinx” in any of the plays.

Audio Shakespeare Pronunciation App gives you the correct pronunciation of words found in the text of Shakespeare's plays, with audio accesibility at the click of a button. This app lets you keep a professional voice coach right in your back pocket. In this video, the app founder, Shane Ann Younts, talks about Ovid's influence on Shakespeare's plays.
I use this app regularly to learn how to say new words, and I heartily recommend it to you.
This app is an official sponsor of That Shakespeare Life.

In Sophocles‘ plays, Oedipus blinds himself and is then exiled. His daughter Antigone acts as his guide as he wanders through the country, finally dying at Colonus where they had been welcomed by King Theseus of Athens.

In Euripides‘ plays Oedipus is blinded by a servant of Laius. (This sounds like Gloucester in King Lear)

Oedipus' two sons, Eteocles and Polynices, arranged to share the kingdom, each taking an alternating one-year reign. (this also sounds like King Lear, albeit Shakespeare used daughters instead of sons)

However, Eteocles refused to cede his throne after his year as king. Polynices brought in an army to oust Eteocles from his position and a battle ensued. At the end of the battle the brothers killed each other after which Jocasta's brother, Creon, took the throne. He decided that Polynices was a “traitor,” and should not be given burial rites. Defying this edict, Antigone attempted to bury her brother.

In Sophocles' Antigone, Creon had her buried in a rock cavern for defying him, whereupon she hanged herself. However, in Euripides' lost version of the story, it appears that Antigone survives.

That all sounds very similar to the turn of events that take place in several of Shakespeare’s plays. 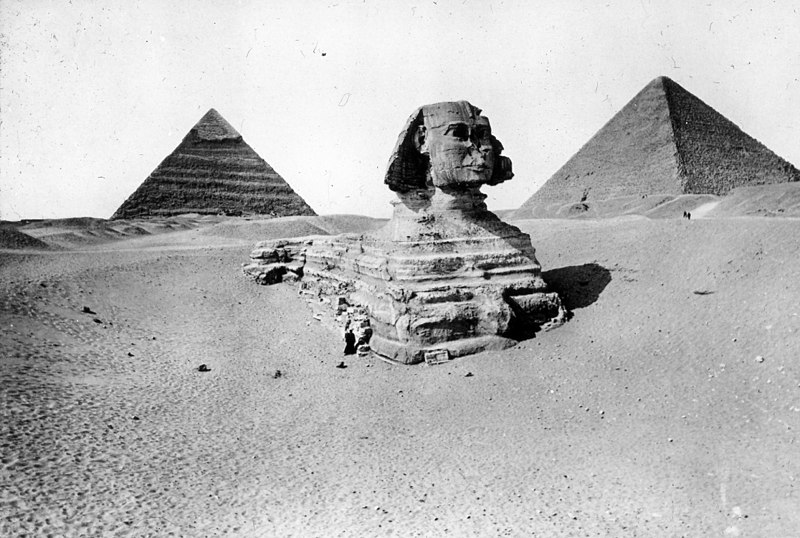 From Egypt, the sphinx imported to both Asia and Greece around 15th to 16th century B.C. Compared with the Egyptian model, the Asian sphinx had eagle wings, was frequently female, and often sat on its haunches with one paw raised in depictions.

In Greek traditions, the sphinx also had wings, as well as the tail of a serpent—in legends, it devours all travelers unable to answer its riddle.

THere were famous Egyptologists from Britain exploring Egypt for England during Shakespeare’s lifetime.

The first explorer of note is George Sandys (1578-1644), who faced arduous trials in his travels. Steeped in British history as a British antiquarian, in 1610 Sandys decided to travel extensively in the Middle East for a year, which he covered in his 1610 publication, A Relation of a Journey Begun An. Dom. 1610

. Unlike many of his time, he believed correctly the Great Pyramids were royal tombs, despite criticism. Sandys thought the tombs were more elaborate than neccessary, but tombs nonetheless.

For valour, is not Love a Hercules,
Still climbing trees in the Hesperides?
Subtle as Sphinx; as sweet and musical
As bright Apollo's lute, strung with his hair…

Once he arrived in Egypt, he was awe struck at seeing their grandeur. He wrote about this moment in his publication, which was something of a hand-sketched illustrated diary of his event. When he saw the pyramids for the first time, he wrote:

“… aloft on a rocky level adjoining to the valley, stands those three Pyramids (the barbarous monuments of prodigality and vain-glory) so universally celebrated. The name is derived from a flame of fire, in regard of their shape: broad below, and sharpe above, like a pointed Diamond. By such the ancient did express the originall of things… uniting all in the supreme head, from whence all excellencies issue.”

He also weighed in with thoughts about the Sphinx, specifically:

“Not far off from these the colossus doth stand… wrought altogether into the forme of an Aethiopian woman: and adored heretofore by the countrey people as a rurall Deity.”

Sandys’ opinions about the pyramids, and the Sphinx, reflect several religious and cultural perspectives common in early 17th century England. 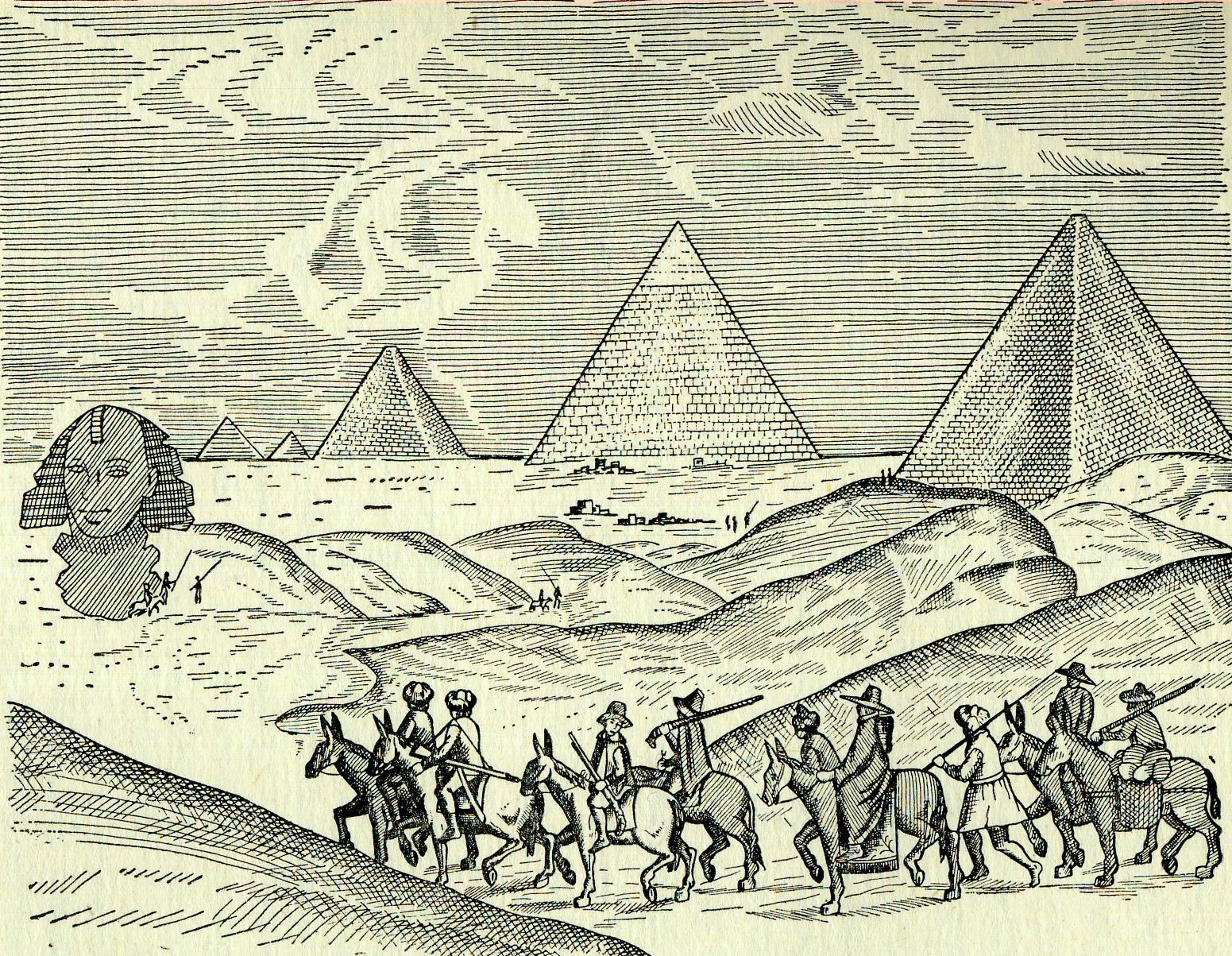 A second Egyptologist of the early 17th century

The next important explorer of the Giza plateau to consider is John Greaves (1602-1652), a scholar, who was totally fixated by the Great Pyramid and leaned heavily on the ancient authors such as Manetho, Africanus, Herodotus Strabo and Diodorus.. Greaves was an English mathematician, astronomer and Orientalist.

Now, while these authors were publishing reports (and images/sketches) of the Sphinx pyramid in Egypt during Shakespeare’s lifetime, it’s important to note that the one reference I was able to find of the word “sphinx” from Shakespeare’s plays, occurs in Love’s Labour’s Lost which was written decades before either of these British Explorers published their writings on Egypt (Isaac Asimov estimated around 1593, modern scholars place it within the 1590s). If Shakespeare did read the works of George Sandys, or hear of his travels, he was not basing his references to the sphinx in that play on those papers. It would have been impossible.

These explorers operating around the time of Shakespeare, however, does show that the nation (and therefore Shakespeare's theater audience) did have an avid interest in Egypt, as well as mythical creatures like the Sphinx, which might explain why Shakespeare not only references the Sphinx, but also chose to write a very Egyptian play, Antony and Cleopatra.

Around the 14th century B.C., the pharoah, Thutmose IV, revived the sphinx as a symbol of royalty and the sun, and by the time Shakespeare was invoking the image of the Sphinx, the symbol was intertwined with Egypt's identity. 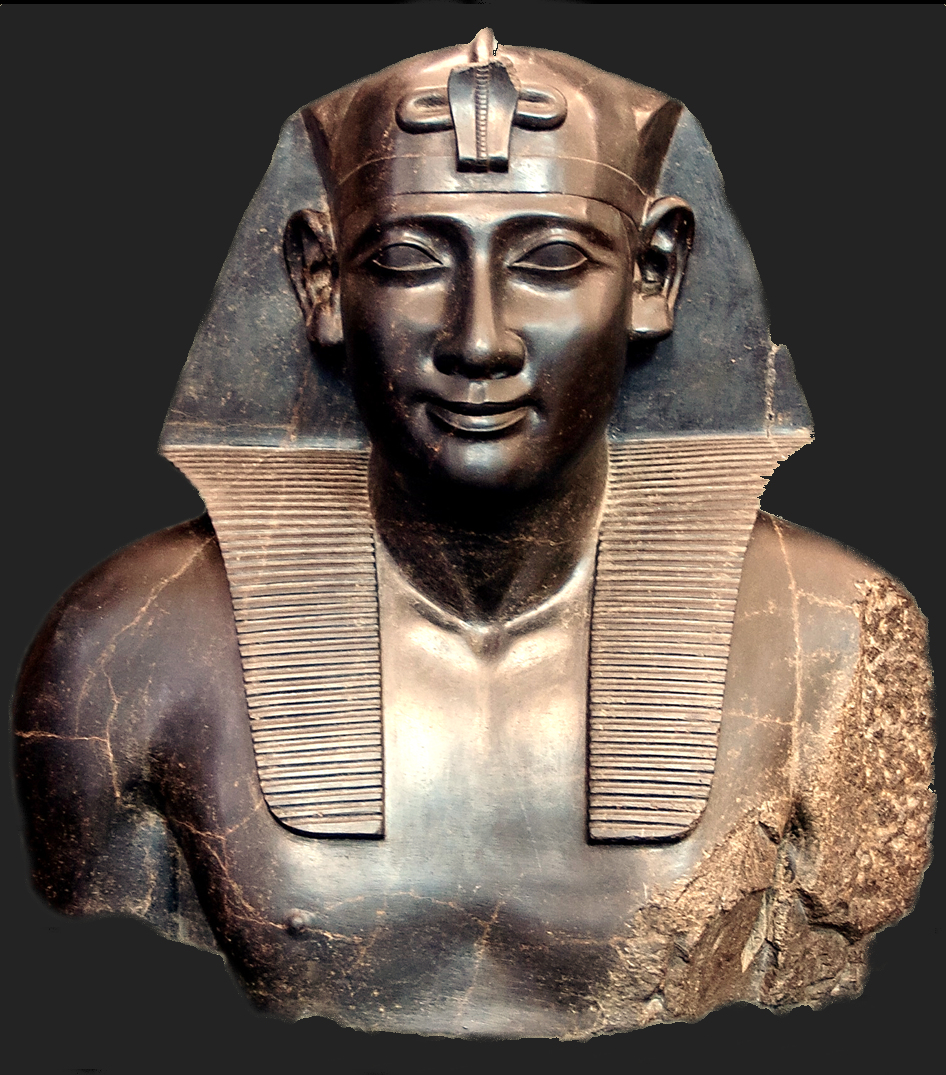 Ptolemy I as Pharaoh of Egypt. British Museum. 2019. Source

Thou shouldst come like a Fury crown'd with snakes

The Ptolemies were Greek Macedonians, but they borrowed many Egyptian symbols for their art. For example, a famous bust in the British Museum shows Ptolemy I Soter, the founder of the dynasty, wearing the familiar flowing headdress of earlier pharaohs. The Ptolemic sphinx discovered at Aswan wears another of these symbols, the Uraeus, an Egyptian cobra perched upon the brow. The Uraeus was a symbol of royalty and authority. The sphinx also wears a ceremonial beard and a carved necklace.

This history shows up in Shakespeare’s Antony and Cleopatra when Cleopatra says “Thou shouldst come like a Fury crown'd with snakes, “ (II.5)

In the play, As You LIke It, Oliver says “ About his neck a green and gilded snake had wreath'd itself, “ (IV.3)

So there seems to be some pervasive history of the sphinx, and greek mythology, in Shakespeare’s plays.

Audio Shakespeare Pronunciation App gives you the correct pronunciation of the words found in the text of Shakespeare's plays, with just the click of a button. With audio accessiblity right at your fingertips, it's like having a professional voice coach you can carry in your pocket. Download the app here.

The Sphinx in artwork contemporary to Shakespeare

Michael Maier, in his book the Atalanta Fugiens (1617) writes about the Sphinx's riddle, and he contends that the solution is not man, as Oedipus suggests, but that what the Sphinx really wanted to hear was the Philosopher's Stone:

“What is that which in the morning goeth upon four feet; upon two feet in the afternoon; and in the Evening upon three?” What was answered by Oedipus is not known. But they who interpret concerning the Ages of Man are deceived. For a Quadrangle of Four Elements are of all things first to be considered, from thence we come to the Hemisphere having two lines, a Right and a Curve, that is, to the White Luna; from thence to the Triangle which consists of Body, Soul and Spirit, or Sol, Luna and Mercury. Hence Rhasis in his Epistles, “The Stone,” says he, “is a Triangle in its essence, a Quadrangle in its quality.”

There is another Sphinx in close proximity in history to Shakespeare, and that's the sometimes-called “French Sphinx” of the late 15th century.

It's different than the Egyptian Sphinx in that it's a woman. She holds her head up high, and it features her breasts prominently, emphasizing her youth. Often, the Mannerist Sphinx, as the French Sphinx is known, will have earrings and pearls ornamenting her attire. Her body is positioned like that of a lionness. This version of the Sphinx became popular in the late 15th century Rome when decorations of the Domus Aurea of Nero were uncovered. Throughout Shakespeare's lifetime, the Mannerist Sphinx became a part of the classical vocabulary and were included in engravings from the 16-17th century. Even the Vatican Palace showcased works by Raphael (1515-1520) that featured Sphinxes.

The first appearances of sphinxes in French art are in the School of Fontainebleau in the 1520s and 1530s and she continues into the Late Baroque style of the French Régence (1715–1723). Source

From France, she spread throughout Europe, becoming a regular feature of the outdoors decorative sculpture of 18th-century palace gardens

Almost all of these renderings allude to Oedipus’ tale, so in terms of how influenced by French Renaissance art Shakespeare might of been, it seems more practical (though not impossible) that he was influenced mainly by the literature which was more prevalent,and easier to come by. However, as one historian and prominent Shakespearean, Dr. Stuart Sillars, notes in his work, paintings were a kind of communication and popular art form that infiltrated the popular mindset for Shakespeare's lifetime, so it bears further investigation as to how much of an impact these paintings could have had on Shakespeare's plays.

When it comes to the connection of the Sphinx to Egypt, and then the logical connection to the Pyramid, there’s a large and involved history there to be explored that touches on Pythagoras, numerology, the 4 humors, and even the Freemasons (which one writer even considers as evidence Shakespeare has some hand in American colonization, and while I’ll link you to that article for research purposes, I’d like you to know that I personally find that suggestion a little thin, but I’ll be open minded enough to think something may come along to change my mind on it someday.