Did Shakespeare Have a Door Bell? 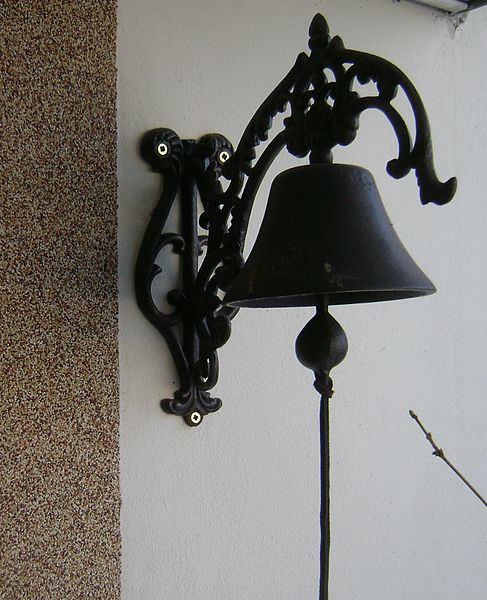 One of the most ordinary domestic things I think about when it comes to life of William Shakespeare is how did someone notify the resident of a home that they had arrived. Did they knock? Did they yell? Or did they use a door bell? Why was the first electric door bell called a bell, at all. Why not a buzzer, or some other loud noise, and why did we keep the name “doorbell” into perpetuity for all of our subsequent entrance to a home or business noisemaking devices? Did the continuity of this term “Door bell” mean that at sometime in the past people had used bells on their doors as a matter of course such that the invention of an electric noise maker attached to the entrance of someone’s home or business would continue to be called a “door bell?” And could Shakespeare have had one of these who had bells for his door?

Let’s explore in this week’s episode as we ask, “Did Shakespeare Have a Door Bell?

This question proves to be more complicated than I had expected as it seems most 21st century historians love to start the history of doorbells aroundthe 1800s with the advent of the first electric doorbell when Joseph Henry, who was the Smithsonian Institution’s first secretary, invented the electric doorbell in 1831. (Source)

Apparently, calling it a “door bell” came from the fact that the 1800s is when the bells attached to one’s domicile saw a rise in fashionability. It was popular in the 1800s to have this going on. 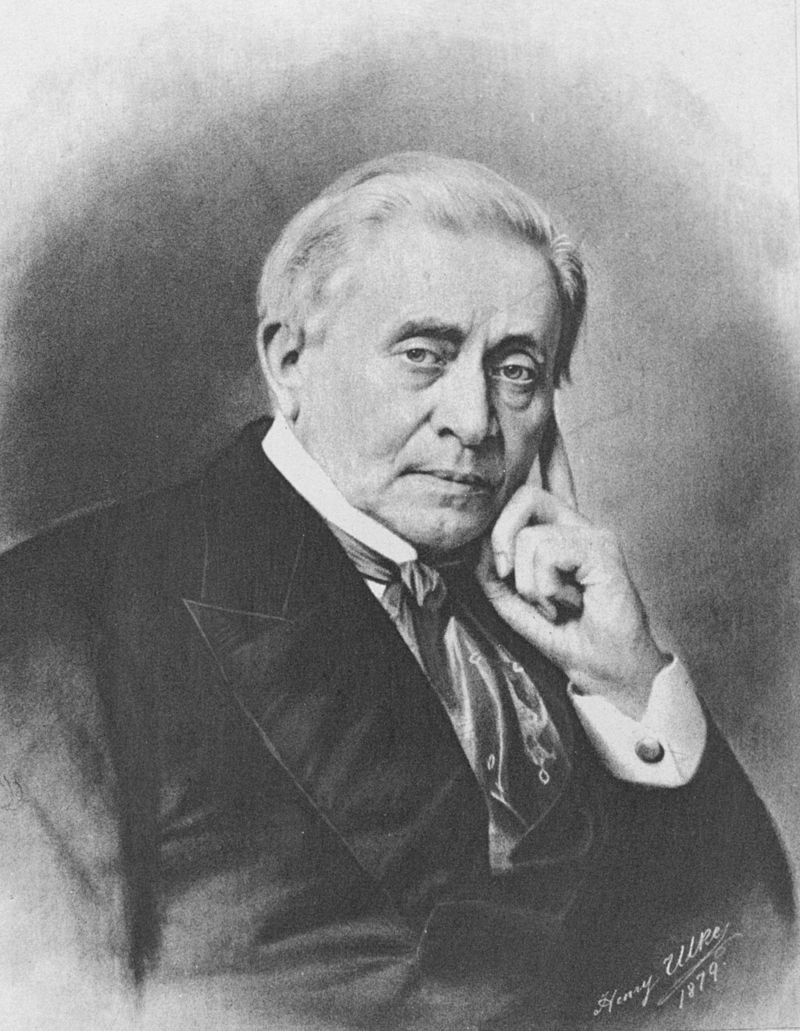 1879 Portrait of Joseph Henry, first secretary of the Smithsonian as well as inventor of the first electric doorbell in 1831. Portrait by Henry Ulke (1821-1910). (Source)

However, the need to notify someone of your arrival at a door at a sound level sufficiently loud enough that people inside can hear the notification above the sounds of daily life was something that existed well before Mr. Henry.

In fact, Door knockers for this purpose date back to ancient China, and certainly to the ancient Romans.

My personal favorite example of a door knocker is not from Shakespeare, but actually from Charles Dickens and a Christmas Carol.

That’s way after Shakespeare, always cool, and does represent a reality from Shakespeare lifetime: The door knocker was the primary way to let people know you were at the door in the 16th cenutry. 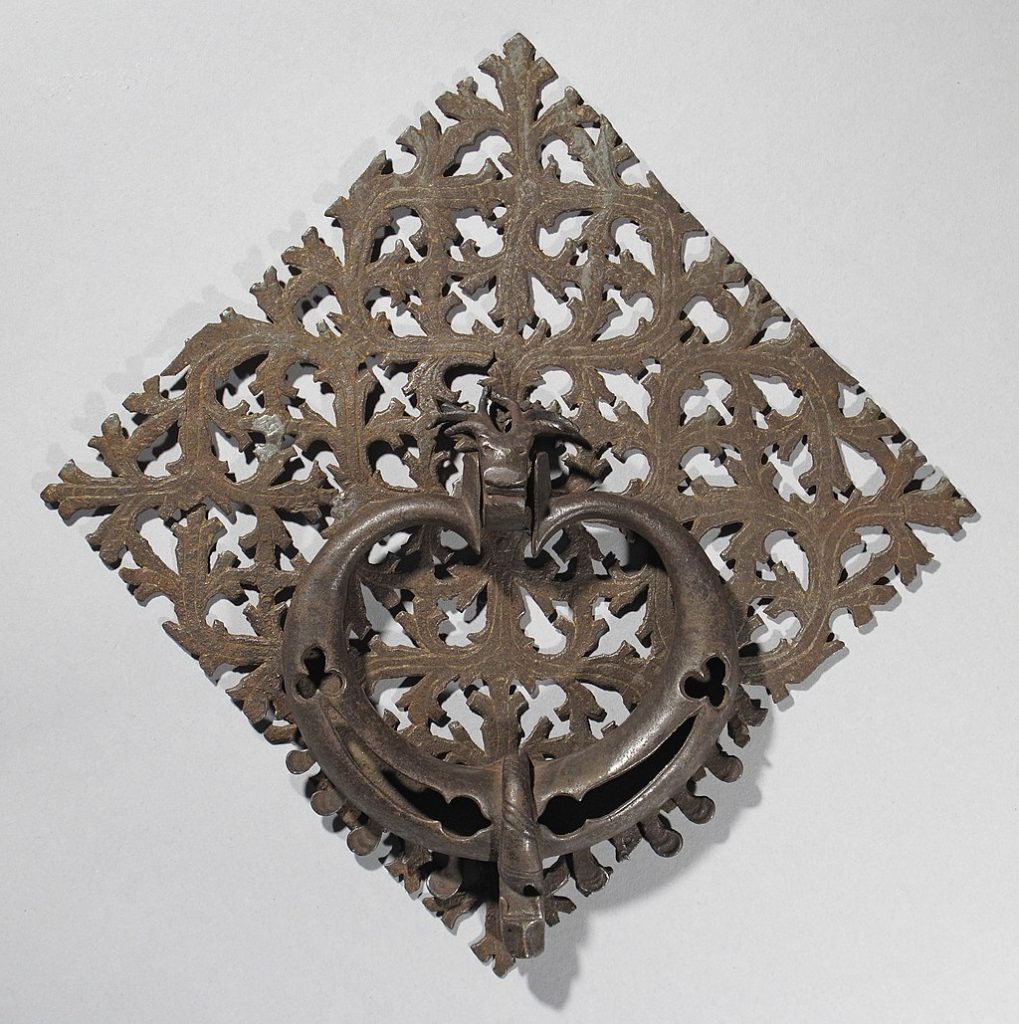 Bells had their place in society for William Shakespeare, however, and were used for a lot of different notifications.

Church Bells were used to signal the hour of the day

And they were rung to signal the passing of an individual

Shakespeare twice mentions bells as a form of signaling or honoring death. In The Tempest, he wrote: “Sea nymphs hourly ring his knell: / Hark! Now I hear them – Ding, dong, bell” (I.ii); there is an almost identical rhyme in The Merchant of Venice. The context of both of these passages is death or an ending: knell as a noun means “the sound made by a bell rung slowly, especially for a death or a funeral.” It is traditional in the UK to ring funerary bells at the passing of an individual. For example, Paul Barber notes in an account of a revenant in Vampires, Burial, and Death: Folklore and Reality: “Then they sent to the church fathers and ordered the burial, the grave site, and the ringing of the bells” (Source). 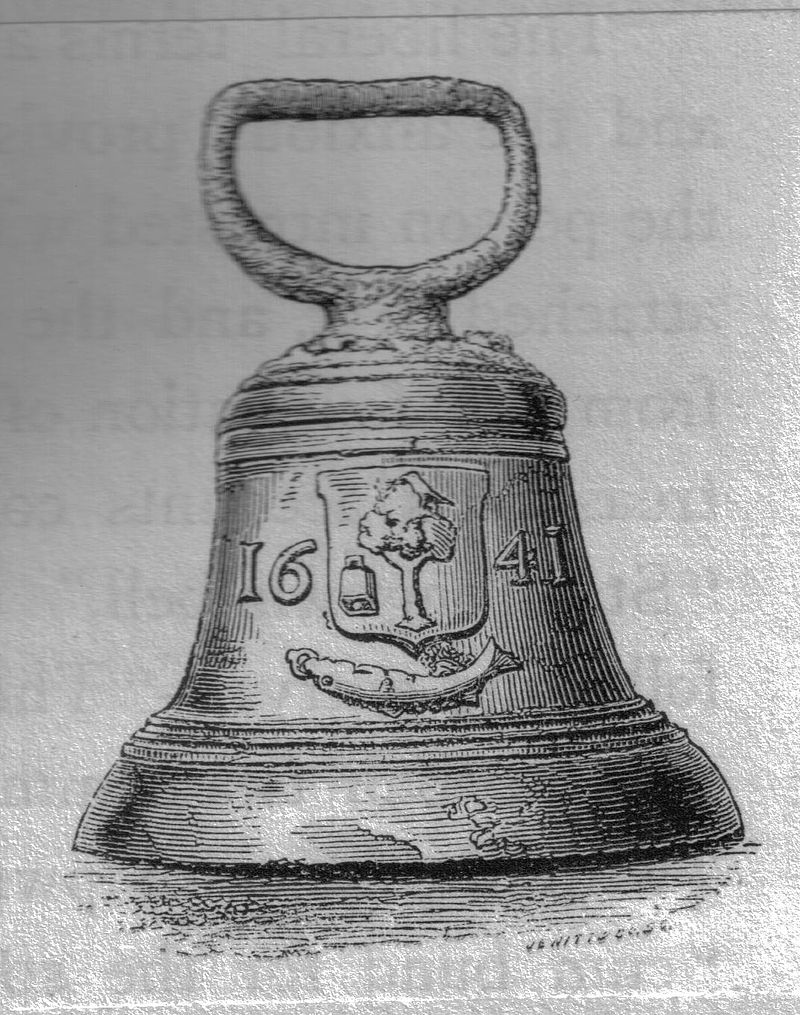 The 1641 Glasgow ‘died bell’, on display in Glasgow’s People’s Palace on Glasgow Green. The bell feature’s the citiy’s coat of arms: The tree, the bell, the fish,and the bird, recall events from the life of St. Mungo. Source

The ringing of the bells over the dead was actually thought to ward off evil spirits and keep them away from the dead person’s spirit as it transitioned to the after life. (Source)

Bells were associated with light, warmth, and often used as key elements of the celebration of Christmas and Yuletide

“Bells, too, play a prominent role in Yuletide celebrations. There are countless Christmas songs that mention or feature sleigh bells, hand bells, or large church bells. Bells are hung from doors, on the tree, over the mantel, etc. And, not long after Christmas (but still during the traditional Yuletide season), bells are rung at the cusp of the new year. It’s well known that scholars believe many Yule traditions are intended to beckon the return of warmth and sunlight — the small light of the hearth fire and candles, of the star imagery and Christmas lights, are reminders of the great, warm and life-giving light of summer.” (Source)

Another point where bells were used in Shakespeare’s lifetime are with the Morris Dances. These dances are virtual staples at Whitsuntide, a holiday celebrated on the seventh Sunday after the Feast of the Pentecost, right around the beginning of summer. With the prevailing imagery of the dance revolving around fertility (the union of male and female) and virility (stags and horses), it’s not such a leap to draw a connection between the Morris dance and ancient solar veneration to bring forward fertility of the soil and the community. The bells are for Morris Dances, as with Yuletide and Church Bells, used to chase away evil spirits and attract good things. (Source) 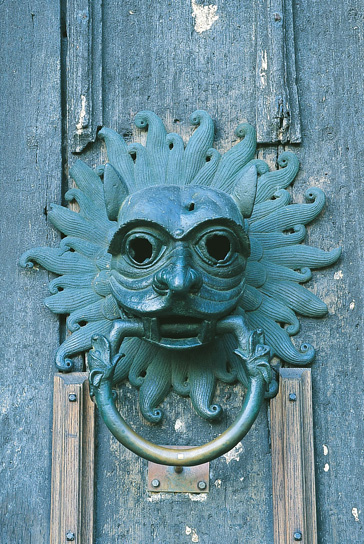 Durham Cathedral Sanctuary knocker. For centuries, and certainly throughout Shakespeare’s lifetime (until 1623 when Parliament outlawed this practice) this door knocker represented the political role of the cathedral itself. Any criminal could find sanctuary if they were able to make it here and rap the knocker. If they did, they would be housed and fed for up to 37 days, then either relocated or pardoned for their crimes. Source

Door Kncokers of the 16th century were a source of art for Shakepseare’s lifetime, with many being plain but several )as shown in these images from fiveminutehistory, quite elaborate in their design. The lionhead became particularly fasionable both for it’s reputation of fierce protection and it’spatriotism as the symbol for England. (Source) 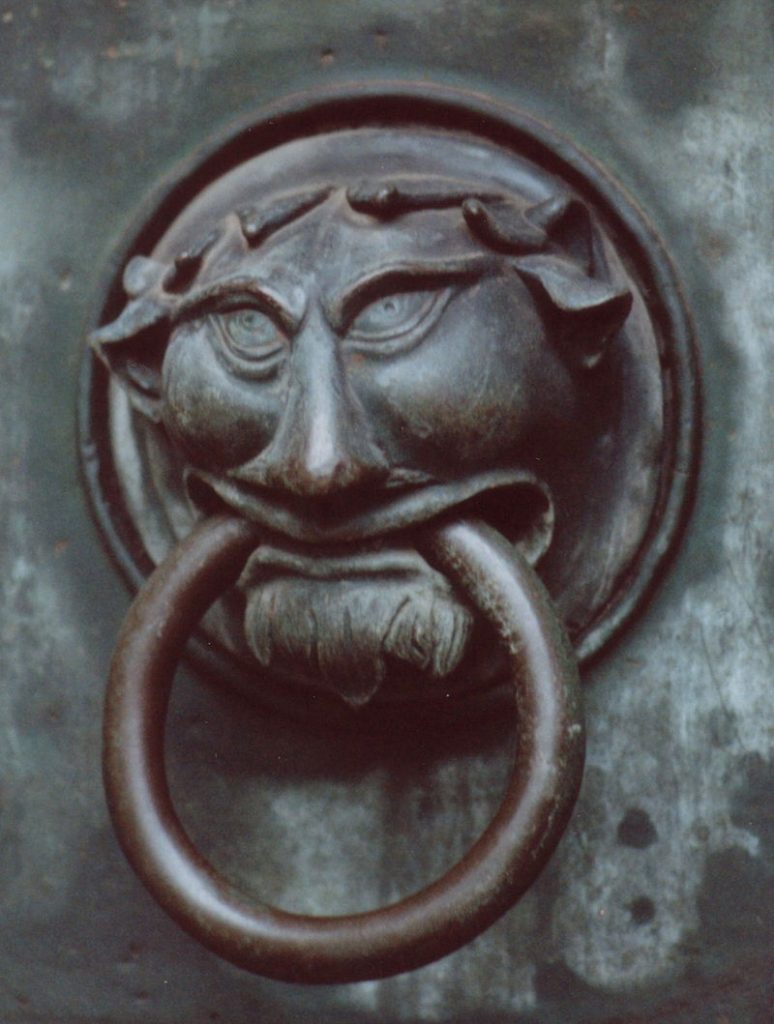 Elaborate door knocker on the front of a church. Source

Bell, book, and candle shall not drive me back, When gold and silver becks me to come on.
– Philip the Bastard, King John III.3

There are alot of bell foundrys which date back to well within Shakespeare’s lifetime, including Whitechapel Bell Foundey that was started in 1570.

Exodus shows bells on the hems of garments of the high priests in Jerusalem. Ancient Greeks used bells in their camps and garrisons by their military patrol officers.

Bells were popular in England, and I see hundreds of reasons and opportunity for bells to have been hung on doors but I cannot find any extant examples of 16th century door bells specifically (at least not without substantially more time and effort into research, which was not available to me in time for this episode.)

So it seems that while they were around, popular in the culture, and used regularly for a wide variety of applications that rnaged from farm bells to funerals, and church services, in order to let Shakespeare know you had arrived at his house, it seems you would have likely knocked on the door with your hand or used a door knocker (though notably in all of the pictures of Shakespeare’s Birthplace none of the doors appear to have door knockers, nor bells of any kind).

There is so much more to explore about this topic than what I was able to fit into this episode. If you knwo more about the history of door bells in the 16th cenutry please leave me a comment below this video–especially if you have evidence in the form of photographs or artifacts about bells in used for doors domestically in England from 1564-1616.

That’s it for this week! I’m Cassidy Cash and I hope tou learn something new baout hte bard. I’ll see you next week!