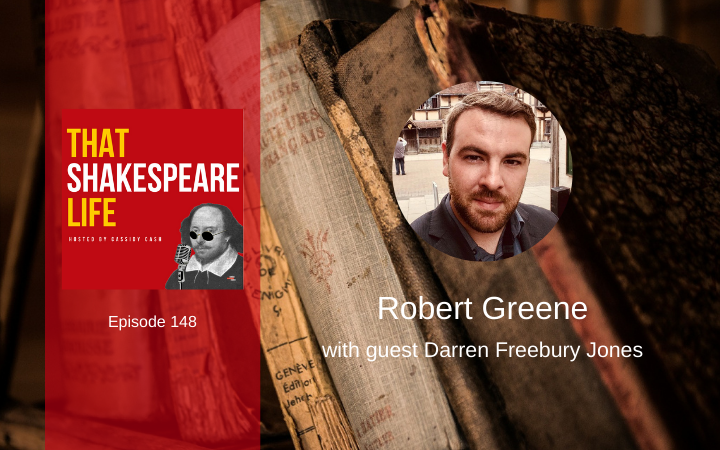 Welcome to Episode 148 of That Shakespeare Life, the show that takes you behind the curtain and into the real life and history of William Shakespeare.

The most memorable illustration of Robert Greene shows him dressed as an ear of corn, sitting at a desk, penning Groatsworth of Wit, his famous deathbed insult that calls William Shakespeare an “upstart crow.” That upstart crow may have gone on to eclipse Robert Greene’s fame in posterity, but for the moment in which those lines were written about the bard, Robert Greene was not only well established as a playwright in early modern England but held a arguably higher reputation in the playwriting industry than Shakespeare himself. Here to help us peel back the layers of history and explore the life, works, myth, and legend of Robert Greene is our guest, Darren Freebury Jones.

Watch the video version of this week’s episode on YouTube. 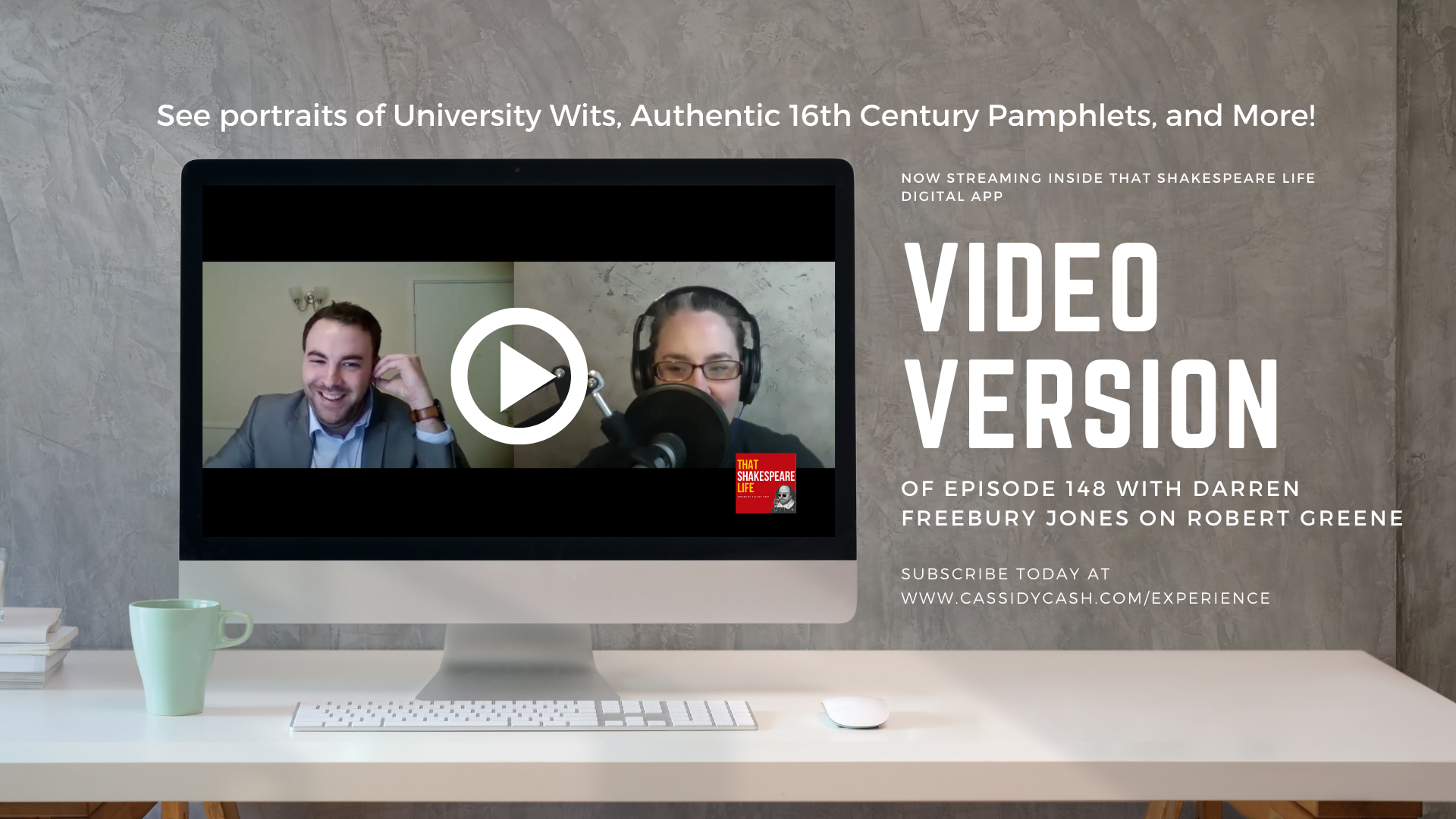 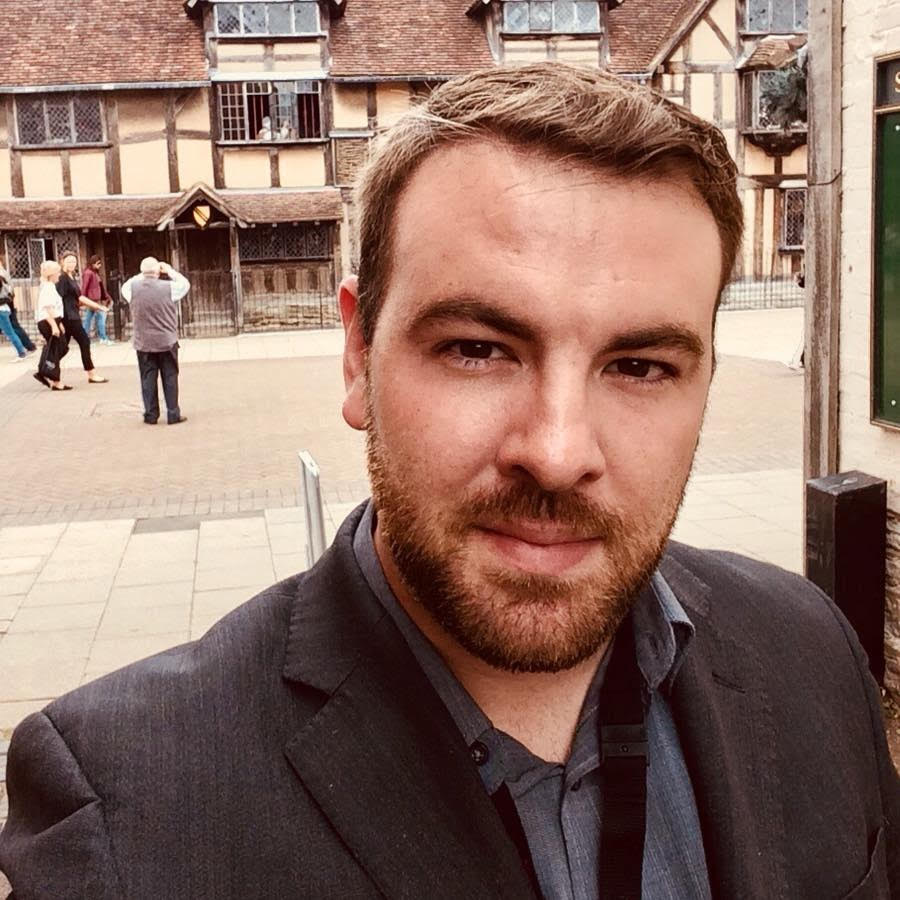 Dr Darren Freebury-Jones is Lecturer in Shakespeare Studies (International – USA) at the Shakespeare Birthplace Trust. His role involves building and developing relationships with schools, universities, and organisations in the USA through regular teaching tours; working on the Trust’s online educational resources; as well as lecturing at the Shakespeare Centre.  Darren’s research interests include early modern attribution studies, digital approaches to examining drama, and intertextuality. His doctoral thesis examined Thomas Kyd’s influence on Shakespeare’s early work and he is one of the editors for the first edition of Kyd’s collected works since 1901.

He has also investigated the boundaries of John Marston’s dramatic corpus as part of the Oxford Marston project. His recent and forthcoming work on the plays of authors such as Shakespeare, Kyd, Lyly, Marlowe, Peele, Nashe, Marston, Dekker, Fletcher, and others can be found in a range of peer-reviewed journals. See Darren’s full list of publications here.

In this episode, I’ll be asking Darren Freebury Jones about :

Subscribe to our email community and get a copy of the ebook, Meet Robert Greene completely free. It includes archival images, maps, bonus resources, and more! 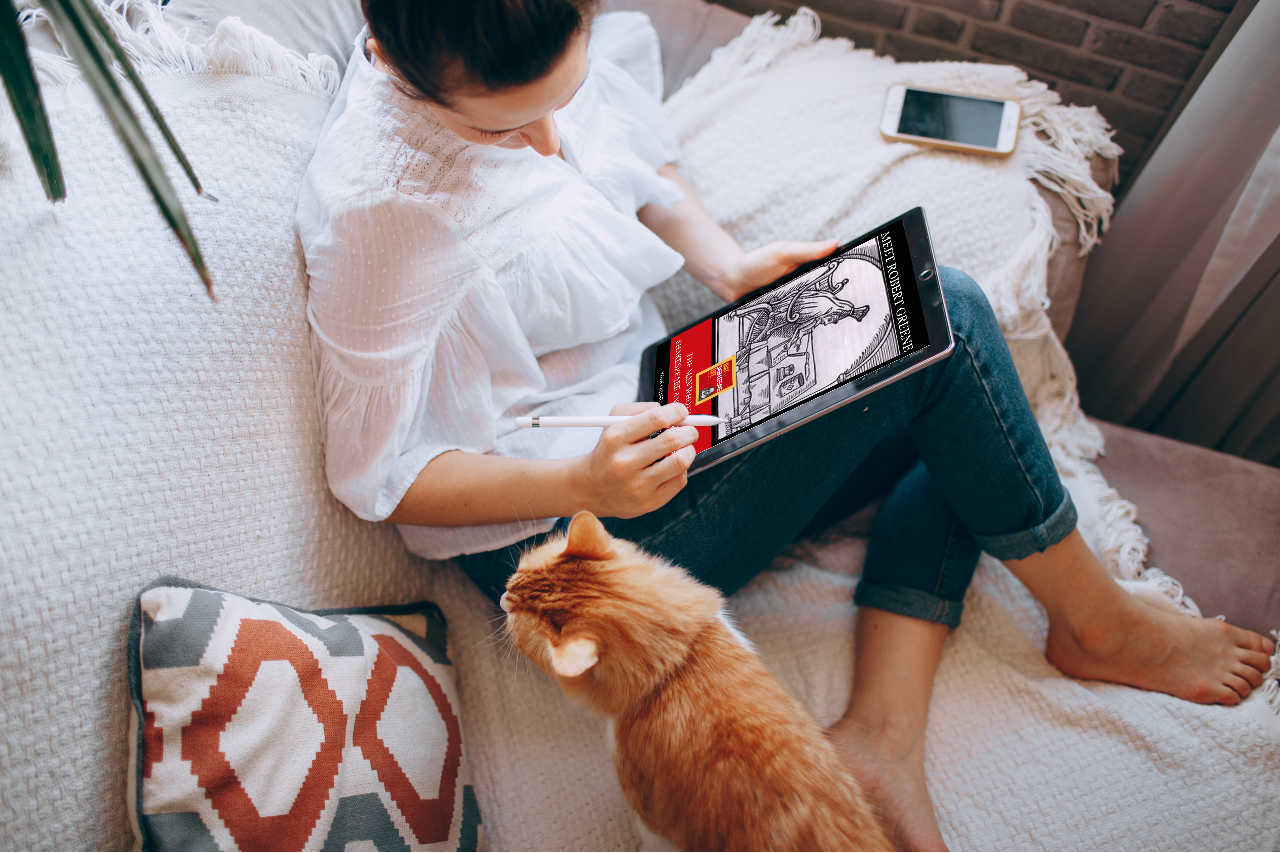 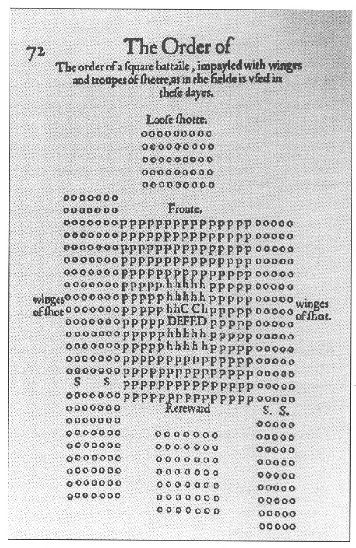 Example of a 16th century pamphlet. While this one is not written by Robert Greene, it does show you what a pamphlet would have looked like in Shakespeare’s lifetime. This one is dated to the late 16th century and is described as showing a pike and shot formation. The “p” marks are the pikemen, the “o” marks are the shot — musketeers and arquebusiers. Image Source

Outside of his insulting Shakespeare, Robert Greene was a well established playwright in his own right, and built a solid career as such well before Shakespeare. In addition to his plays, Greene is remembered as a successful pampheleteer. Pamphlets in the 16th century work something like a modern day ebook in that they are small books, often lighter in tone and topic than a novel, and are designed to be widely distributed. Darren describes the pamphlet as being “loosely bound booklets, usually prose, [but] have had poems in them too.” When Greene first arrives in London, he makes his living writing pamphlets. Darren explains that, “After [he moves] to London, [Greene] published 25 works in prose.” For his efforts getting paid to write pamphlets, Darren shares that Robert Greene could arguably be described as the first professional writer in England.

Purchase this Lesson Packet
Subscribe for All the Packets
A crow without feather? Master, mean you so?
For a fish without a fin, there’s a fowl without a feather;
If a crow help us in, sirrah, we’ll pluck a crow together.
Dromio of Ephesus 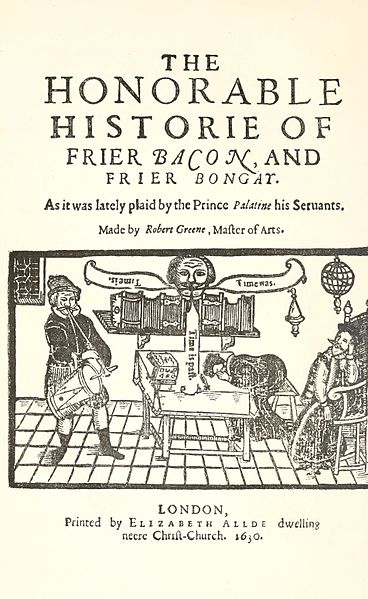 Shakespeare was the new kid on the block


By the time William Shakespeare arrived in London somewhere around 1591, Robert Greene was essentially the highest ranking playwright in the city (if not England). He had a well established reputation, his works were widely successful, and Shakespeare was shaking up the industry. Darren explains that while Greene and Shakespeare’s works overlapped a little, the threat percieved by Robert Greene was not so much personal competition as it was a challenge to the industry standard.

Tragedy of Francis King of Aragon, Bundy, and James IV, all date outside of Shakespeare’s work. Shakespeare cited Greene’s play when he wrote As you Like it, so some of Greene’s work may have overlapped with HEnry VIII, and one written in 1591, could have inspired Titus Andronicus, so the dramatic careers of Greene and Shakespeare, overlapped somewhat but Greene was the established writer when Shakespeare [showed up and starting making a splash.]

Robert Greene had built his career on a certain set of attributes and approaches to theater while Shakespeare, due to his upbringing in the theater as an actor prior to writing plays, had a unique perspective about what an audience, in particular, wanted to see on stage. Darren explains that Shakespeare was influenced heavily by

the University Wits, delivering their words on stage, learning what audiences like and don’t like, then giving it to them. [Shakespeare’s] intimate knowledge of the stage, having started off as an actor, gave him an advantage over his contemporaries because his plays are deeply actor and audience focused.

Get started today!
I think this upstart is old Talbot’s ghost,
He speaks with such a proud commanding spirit.
Joan La Pucelle 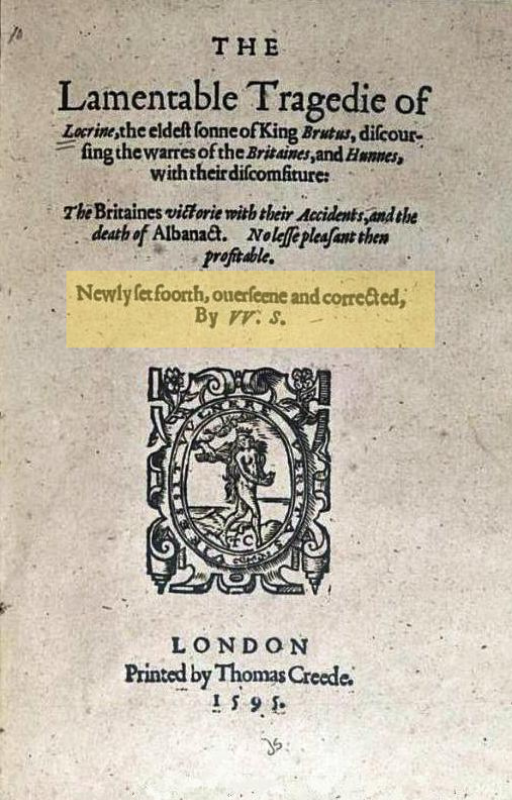 Title page of Locrine published in London 1595. Cassidy Cash highlighted the portion where Creede writes “W.S” so you can easily identify it’s location. This image is in the public domain. Image Source

The WS on Locrine isn’t Shakespeare

Thomas Creede, in 1595, described Locrine as ““Newly set forth, overseen and corrected, By W.S”

When I saw the WS on that description for the first time, I desperately wanted those initials to stand for William Shakespeare, as you might expect. However, several noted scholars, including Darren, have concluded that attribution is unlikely, if not impossible. Darren explains:

The dominant theory is that Shakespeare could have had a supervising role in this play, but if he was involved, he was involved so little that it’s impossible to find his statistical analysis using these same tools. The epilogue to the play seems to have been written after the writing of the original play. WS could have been someone with the same initials. Didn’t appear on his own title pages until later. 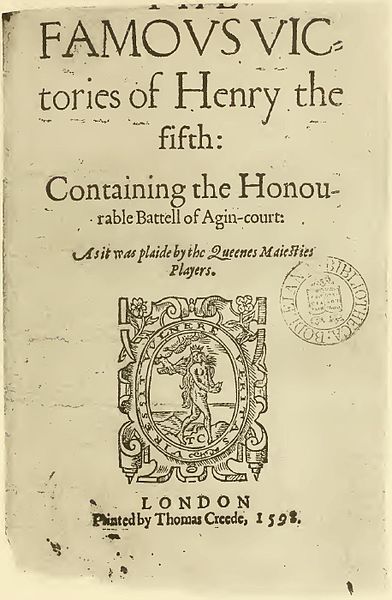 Title page of Henry V, performed by the Queen’s Men in 1598. “The famovs victories of Henry the Fifth Containing the Honourable Battell of Agin-Court As it was plaide by the Queenes Maisesties Players” Image Source

Darren’s work mentions that The First Part of the Most Tyrannical Tragedy and Reign of Selimus was performed by the Queen’s Men in 1592. Darren’s research indicates Shakespeare may not have been with this company at that time.

Going off of title pages, Shakespeare wrote his earliest plays with Pembroke’s men before it disbanded in 1593, could have existed in 1589, Terrence [writes that] surviving evidence linking early acting career with Pembroke’s men is substantial. Greene and Shakespeare were writing for rival playing companies but be careful placing too much emphasis on rivalry. They were also collaborative in many respects. Shakespeare could have attended plays by Queen’s Men. Richard III and Henry V by that company were plays adapted by Shakespeare later in his career. 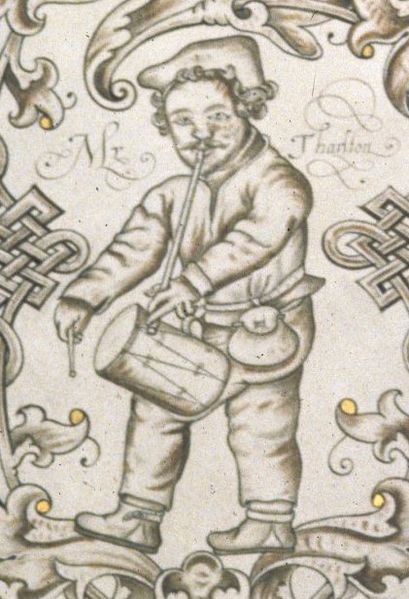 Subscribe to our email community and get a copy of the ebook, Meet Robert Greene completely free. It includes archival images, maps, bonus resources, and more!

Episode #010: Interview with Hazel Forsyth about finding Shakespearean Shoes at The Rose Theater
Episode #27: The History of Shakespeare's Beard with Christopher Oldstone-Moore
Episode 58: Natalie Elliot and Shakespeare's Philosophy of Science