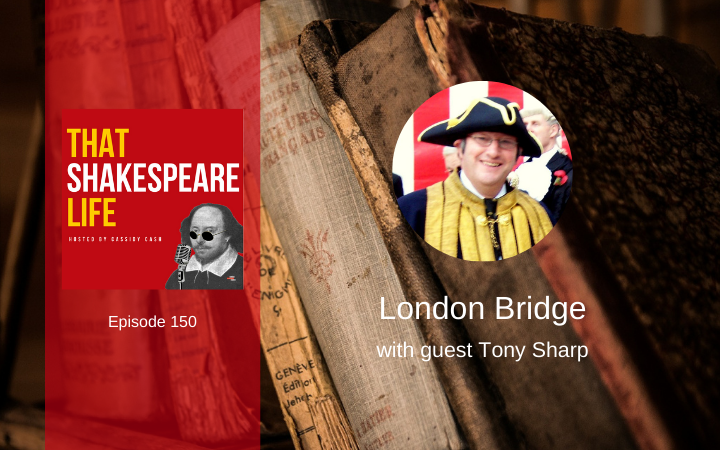 Welcome to Episode 150 of That Shakespeare Life, the show that takes you behind the curtain and into the real life and history of William Shakespeare.

There has been a bridge over the river Thames since the time of the Romans and the reign of Aethelred II, when the bridge was designed as a Saxon defense against the Danish. Since then, there have been at least 5 bridges either built, or repairs made to the predecessor, which have occupied the crossing of the Thames at London Bridge. The original structure we think of as the first London Bridge was located about 100 feet east of today’s London Bridge. There was a London Bridge stretched across the Thames when Shakespeare was there, it is very likely that the bard travelled upon this bridge, as did numerous travellers, pageants, and processions throughout this lifetime. A distinct difference from the London Bridge we have today, though, is that unlike today’s bridge which is focused on providing passage for cars and pedestrians, the London Bridge of Shakespeare’s day included houses, shops, and of course, because this was well before cars existed, provided passage for people on foot, horseback, and the occasional carriage. Known for being a site of production, as well as military armament, and even commercial business, the bridge of Shakespeare’s England was quite different from the bridge we have now. Here today to share with us what London Bridge was like for William Shakespeare is our guest, Tony Sharp. 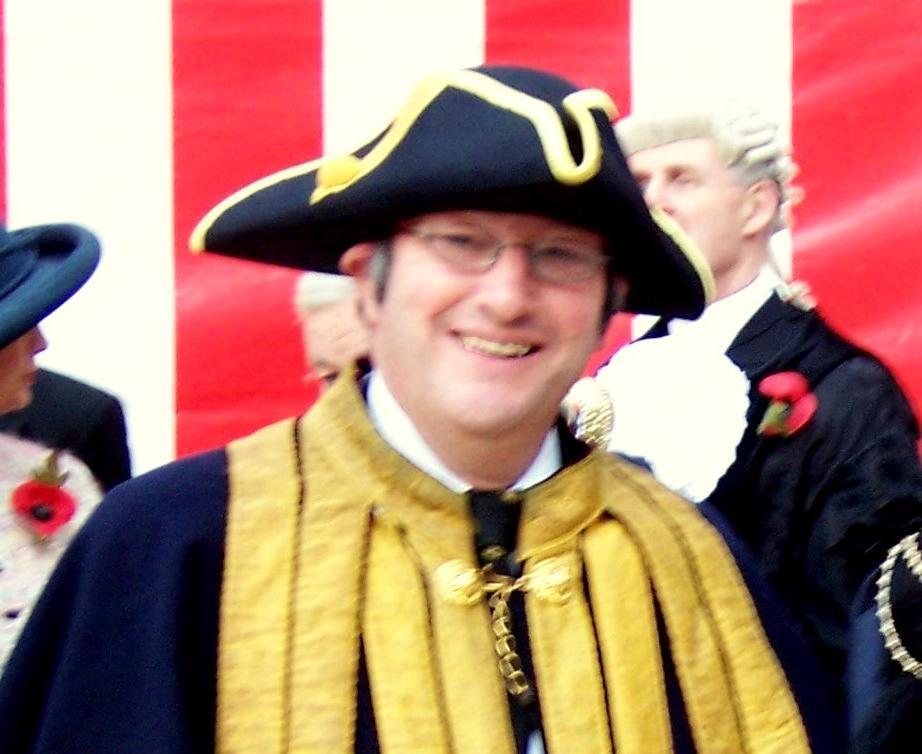 Tony Sharp is retired from corporate life today, and is an independent historian of London’s earliest history. He is a graduate of Balliol College, Oxford (PPE, BA/MA 1982) and he Read for the Bar at Lincoln's Inn (1984-85) Tony became a business consultant at one of the City of London's ‘Big 4' accountancy in consulting practices. His voluntary research work into the history of the City of London and the Borough of Southwark stem from his voluntary work as an officer in several of London’s civic institutions and guilds. He works on Ango-Saxon Studies, London Medieval history, the history of London Bridge, and Tudor London.

In this episode, I’ll be asking Tony Sharp about :

Subscribe to our email community and get a copy of the ebook, London Bridge, Basic History Guide completely free. It includes archival images, paintings, resources on London Bridge, and more!
Use this form to sign up and immediately download the ebook. Email subscribers get guides like this one every week! 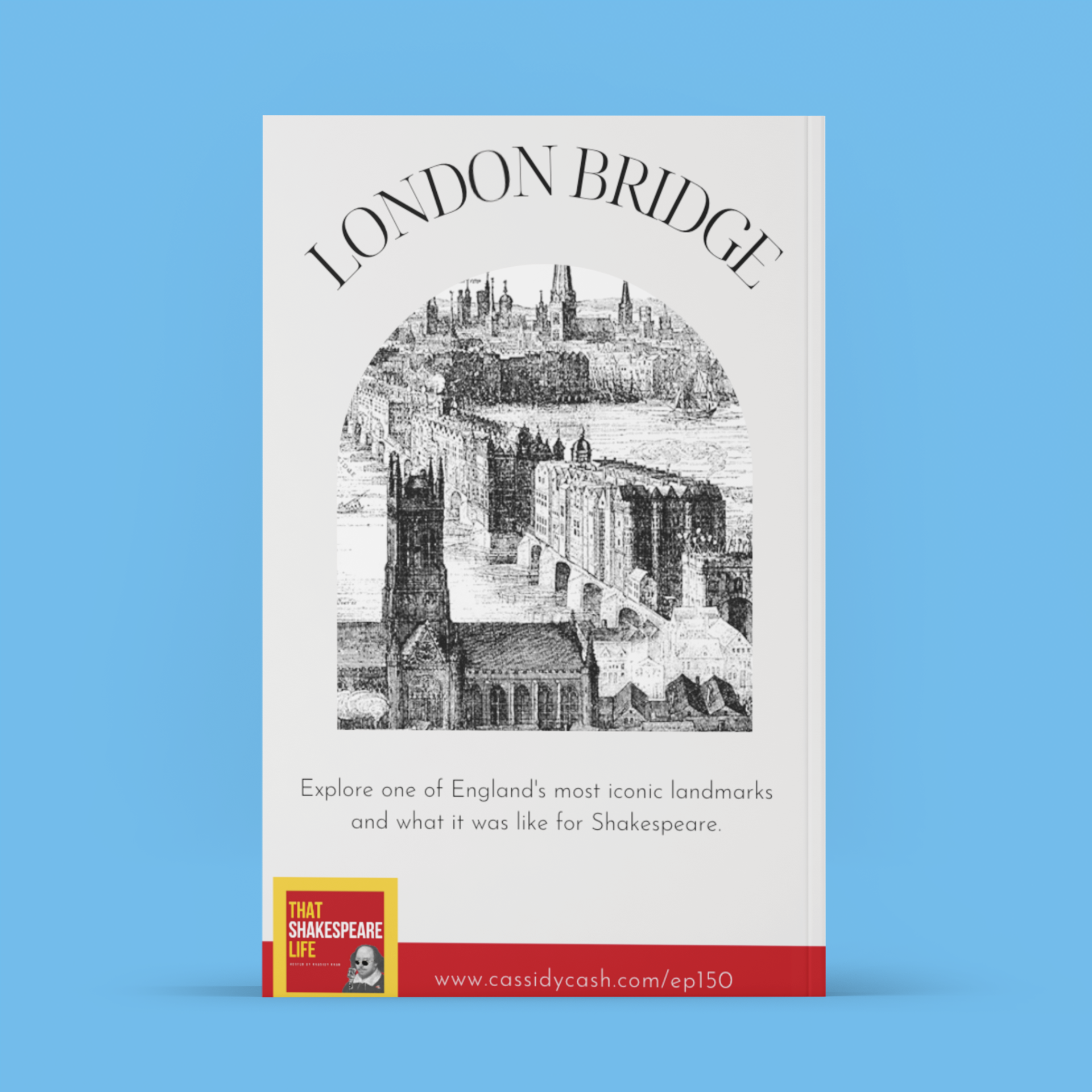 How now, Captain Fluellen! come you from the bridge? 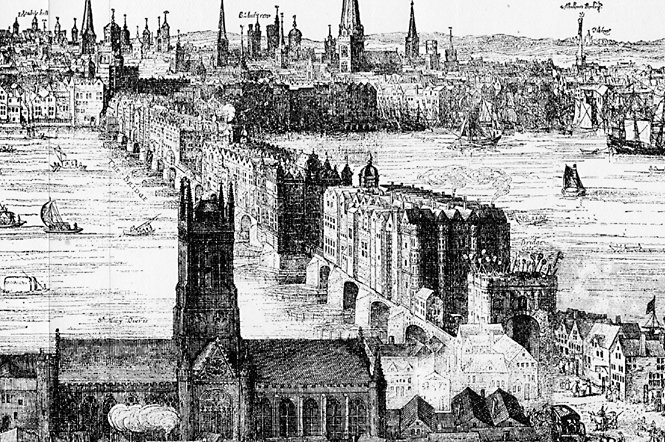 London Bridge Had Houses Across It

Drawings found in Tony’s paper show not only the difference in location for modern day London Bridge, but compared to the one in Shakespeare’s lifetime, London Bridge looks completely different visually, due mostly to the fact that there is a series of what appear to be houses across the entirety of the bridge. Tony explains,

It would have looked like a continuation of the street. You couldn’t see the river from the Bridge as you walked across. There were inns, shops, tailor shop, and depending on which side, Stone gateway (on Southwark side), small draw bridge connects two parts of the bridge. Used to be raised for ships, but had not been raised for decades prior to Shakespeare.

There were not only shops and buildings on the bridge but many people actually lived on the bridge, including one famous person who heavily influenced the life of William Shakespeare:

Yes, they did. The above premises were rented out for people to live. Famous person: Geoffrey Chaucer lived on London Bridge. 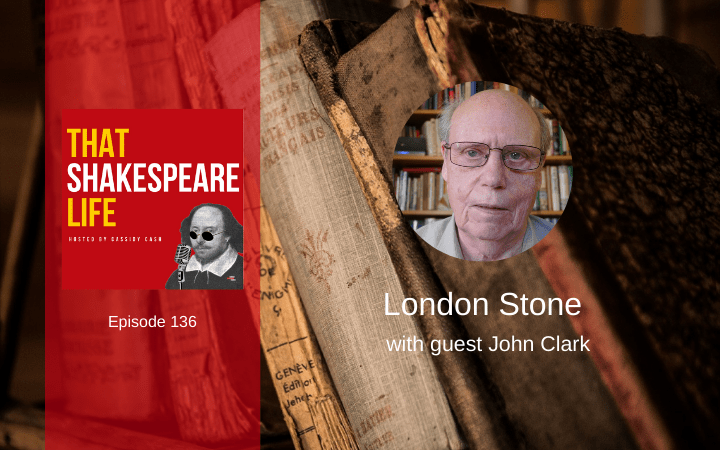 Come, then, let's go fight with them; but first, go

and set London bridge on fire; and, if you can, burn

down the Tower too.


London Bridge was originally designed to accommodate the passage of ships, but as Tony mentions, the raising and lowering of London Bridge had ceased prior to Shakespeare’s lifetime. When it cames to ships on the Thames River, Tony explains that the bridge functioned as a barrier:

Larger ships stopped at the bridge and didn’t go further. They were too big to go between the arches (wide). The only things that went under the bridge at all were ferries and werries (small row boats), water taxis. “Werries” small rowing boats operating like water taxis.

While water traffic saw London Bridge as a required stopping point, land traffic was bustling across the top of the bridge. Obviously, there weren’t cars, but there would have been carriages and horses that used London Bridge to get across from the City of London to Southwark. Tony explains that the architecture of the bridge itself was thoughtfully considered in order to accommodate both the passage of travellers as well as all of these permanent building establishments:

The actual footpath roadway width of london bridge was just 12 feet. That’s very small. Eventually, it was supervised by bridge masters assistants. Livestock was allowed to be driven across the bridge (usually not North to south, but instead south to north to supply the city with food. Early in the morning, cattle/sheep/pigs, etc, were allowed to go across in one big group. There was a rule of one way only for carts or horse carriages, the rule was they would go from South to North for part of the day then South to North  for another part of the day, only way to do it because the space was too narrow.

This Episode Has a Complete Lesson Pack

Turn today's episode into a lesson plan for your classroom using this history guide and packet of worksheets. Become a Patron at the Shakespeare Educator Level or Higher to open this and all of our lesson plans, worksheets, and history guides. 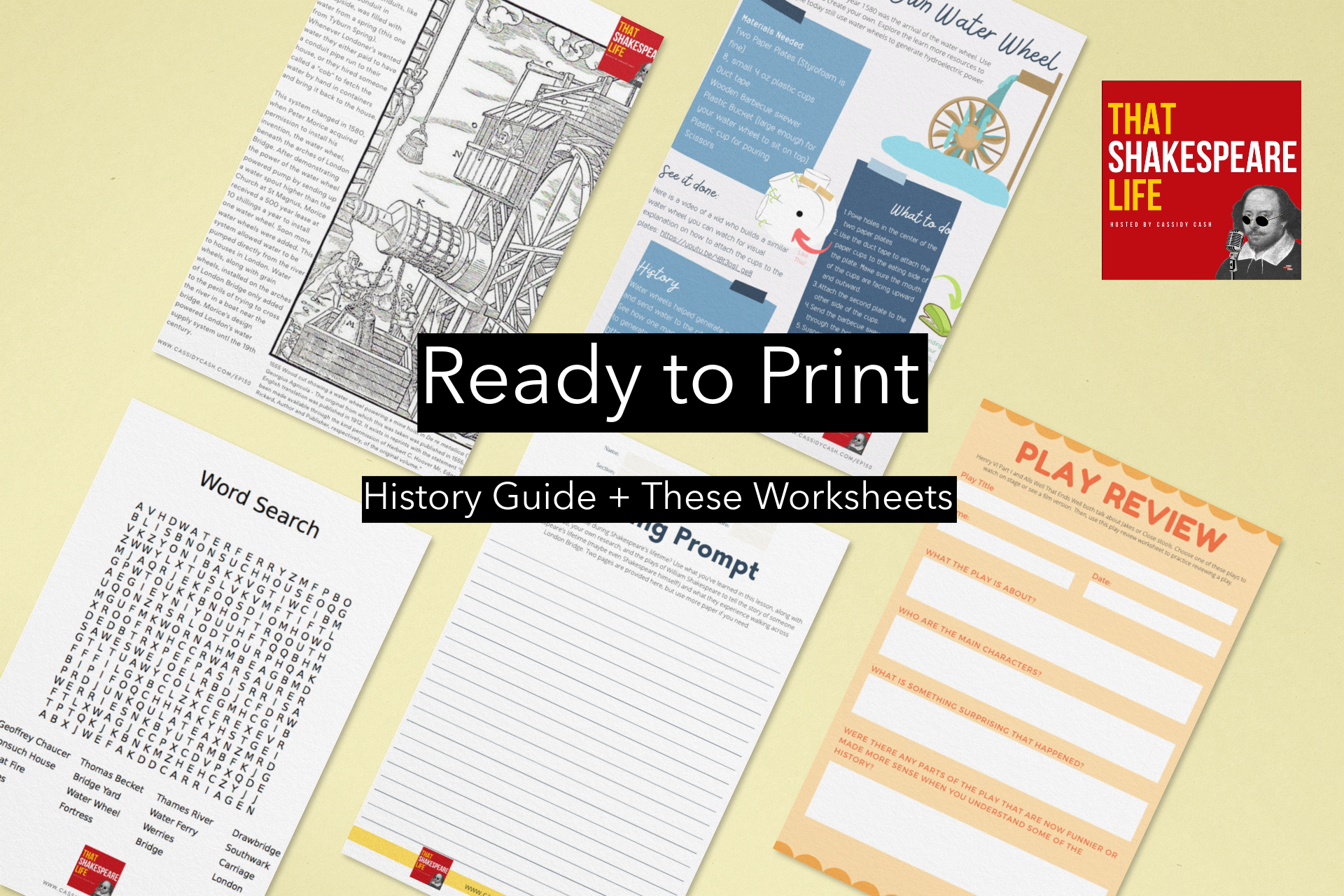 In that thou laid'st a trap to take my life,

As well at London bridge as at the Tower.

One of the aspects of Tony’s paper on London Bridge explains how the ownership and control of the bridge moved from the King to the City of London.

Logistically, the shops paid leases to be there. That was collected by the bridge masters. That contributed to the maintenance of the bridge. The bridgemasters were appointed by the corporation, operating from the bridge house yard. Maintenance depot and controlling body.

Religious pilgrimages created a kind of tourism around London Bridge that helped finance the maintenance of the bridge itself. Tony explains the story of Thomas Beckett, who was murdered at Canterbury, is commemorated by travellers who wanted to start on London Bridge (as he had done) and travel the last known journey of Thomas Beckett, to Canterbury. The bridge had not only shops, but religious stops as well:

Halfway across the bridge there was a chapel on the bridge. After the reformation, the chapel was closed and became a shop. Extensions were built above it for apartments. This meant that the pilgrimage started with the chapel, go to canterbury, and return back at the chapel on London Bridge. This meant that people left alms, endowment, and lands to the bridge masters for the paying for their souls on this pilgrimage. After the reformation, the religious aspect disappeared, but people kept paying for the bridge. [There is a seal] on the bridge [that] says “bridge of St. Thomas the Martyr of London” [The Bridge’s name is actually] not London Bridge, but St. Thomas’ Bridge. [The Bridge and properties upon it were not] separately managed, [but] were [both] property of Bridge Master’s estate (as was Southwark until it was acquired by London) rents for the city applied to bridge as well.

We know London Bridge as an icon of England today,but it seems that for Shakespeare’s lifetime and well after, too, the people of England loved their bridge and paid to keep it in good condition.

People left the money to a trust (Americans call it “charity”) the endowments, instead of religious, became secular to maintain the bridge. So successful so early in the Bridge’s history (*1380s) that any toll was not charged for people to cross, but carriages and carts were waived.They didn’t need to charge a toll because so many people had donated money for it’s care, there was no requirement to charge money to maintain it. So much endowment accumulated by the religious endowments, there was no need to charge money. Largest charitable fund in the UK is the Bridge House Trust. Not just the current London bridge, but 5 bridges across the Thames today. Tower Bridge next to the Tower of London (1894) not London Bridge. 1760s, between London and Westminster, Blackfriars Bridge, Southwark Bridge. [When a] private company [built a bridge and] charged a toll, they went bankrupt, so London Bridge Trust opened [that bridge] as a free bridge, [the] Millenium Bridge (footbridge) StPaul’s Cathedral to Gallery of Modern Art.

While the nostalgia of Canterbury pilgrimages and the donations of secular charity may have helped pay the bills for London Bridge long after England became Protestant, London Bridge (or St. Thomas’ Bridge if we’re being precise) may have also been significantly busy because it was the only bridge available. Tony explains,

Only one across the Thames, from Roman times, replaced several times, eventually replaced by the stone bridge circa 1209, and that’s the one Shakespeare knew. 1750 was the next Bridge that was built, westminster bridge. No other bridges until then. 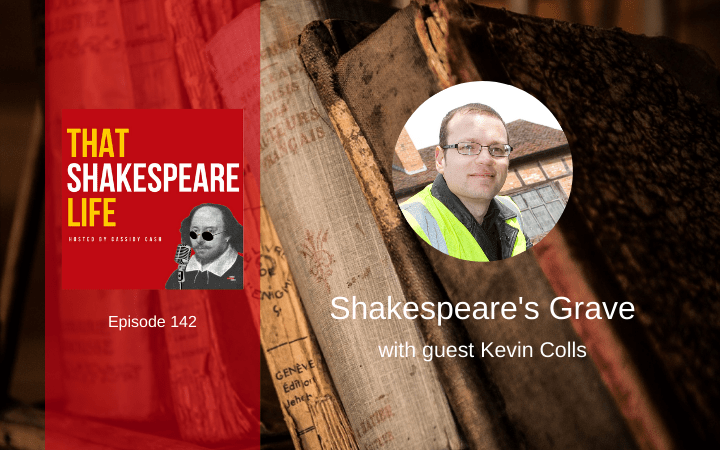 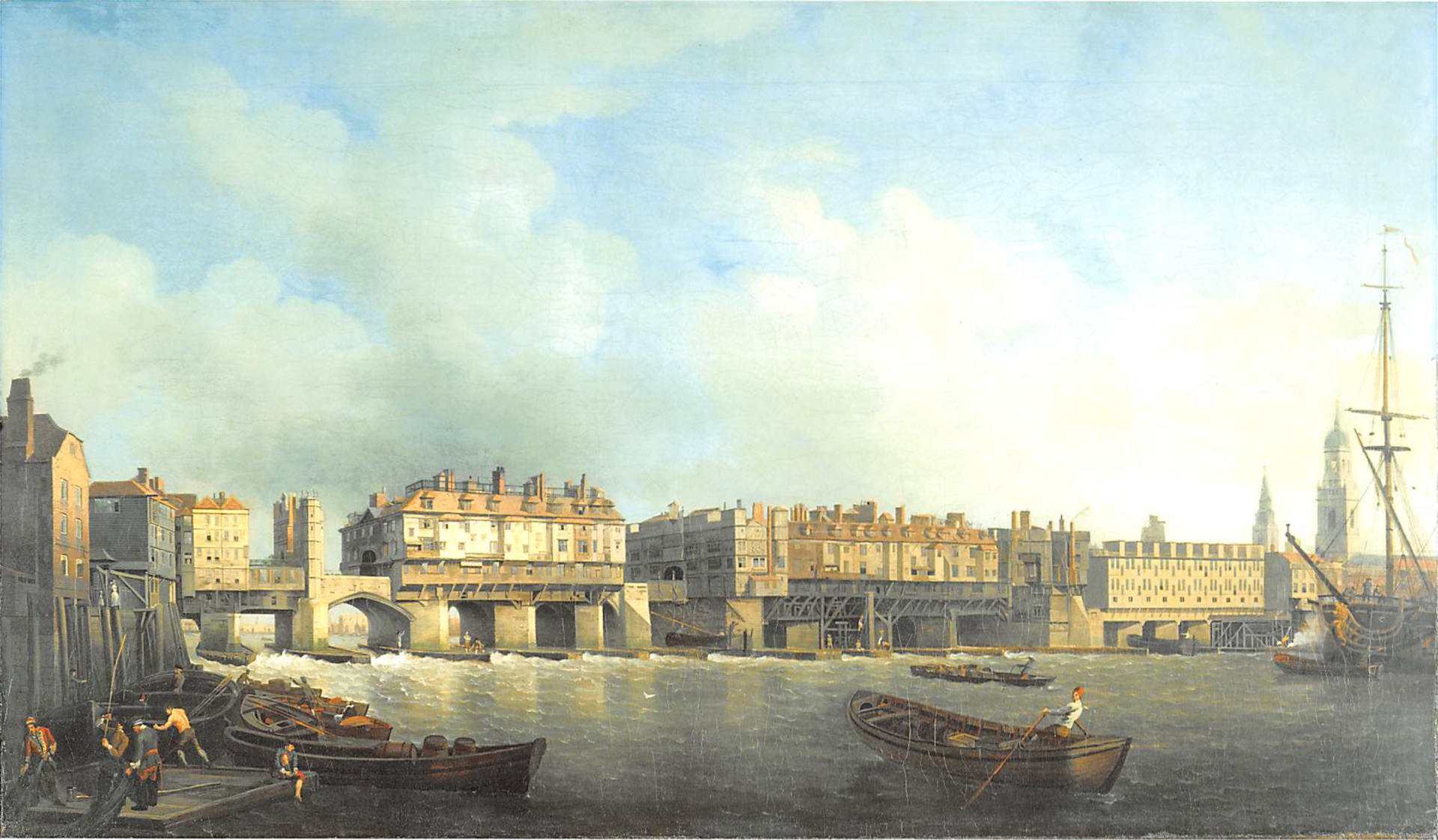 London Bridge a Fortress for London

Throughout the Bridge’s history, and for Shakespeare’s lifetime, London Bridge operated as a fortress for the City of London, and for England as a nation. We can see the association with military defense reflected in Shakespeare’s plays when characters like Jack Cade seek to take over London Bridge in his fight to take over the country. Tony explains that there was only one way onto the Bridge and this opening was often closed in times of trouble:

Southside of the bridge,[there is a] stone gateway [which is] open most of the time. That could be closed due to insurrection on the southside of the bridge, last one to happen was 1780–Gordon Riots. Led by Lord Gordon [who was] opposed to Catholic emancipation. Shakespeare would have known about the rebellions that were organized against Mary Tudor (predecessor to Elizabeth I). Peasant’s Revolt, attacked Southwark, attacked the city of London through the Stone Gate. It was used as part of defensive war mechanism.

After the last known insurrection in 1780, the Southgate of London Bridge stopped being used as a military weapon.

Subscribe to our email community and get a copy of the ebook, London Bridge, Basic History Guide completely free. It includes archival images, paintings, resources on London Bridge, and more!
Use this form to sign up and immediately download the ebook. Email subscribers get guides like this one every week!