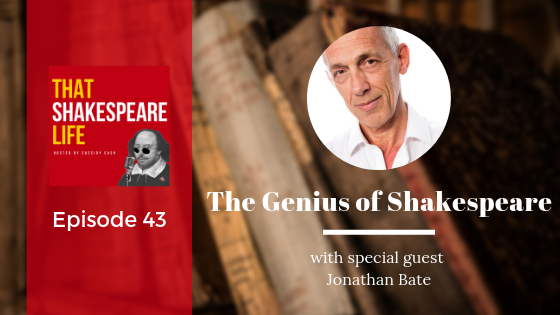 Welcome to Episode #030 of That Shakespeare Life, the podcast that takes you behind the curtain and into the life of William Shakespeare.

William Shakespeare started out the son of a glove maker in a small town in England, and went on to become the greatest playwright the world has ever seen. How does one person accomplish so much? What did it take, exactly, for Shakespeare to become a genius? Was he born with particular gifts and talents no one else has seen or heard of again in the last 400 years? Or has our love of Shakespeare inflated his reputation beyond what it deserves?

One man who has argued in the public arena specifically for Shakespeare, the man, is our guest this week, Sir Jonathan Bate. 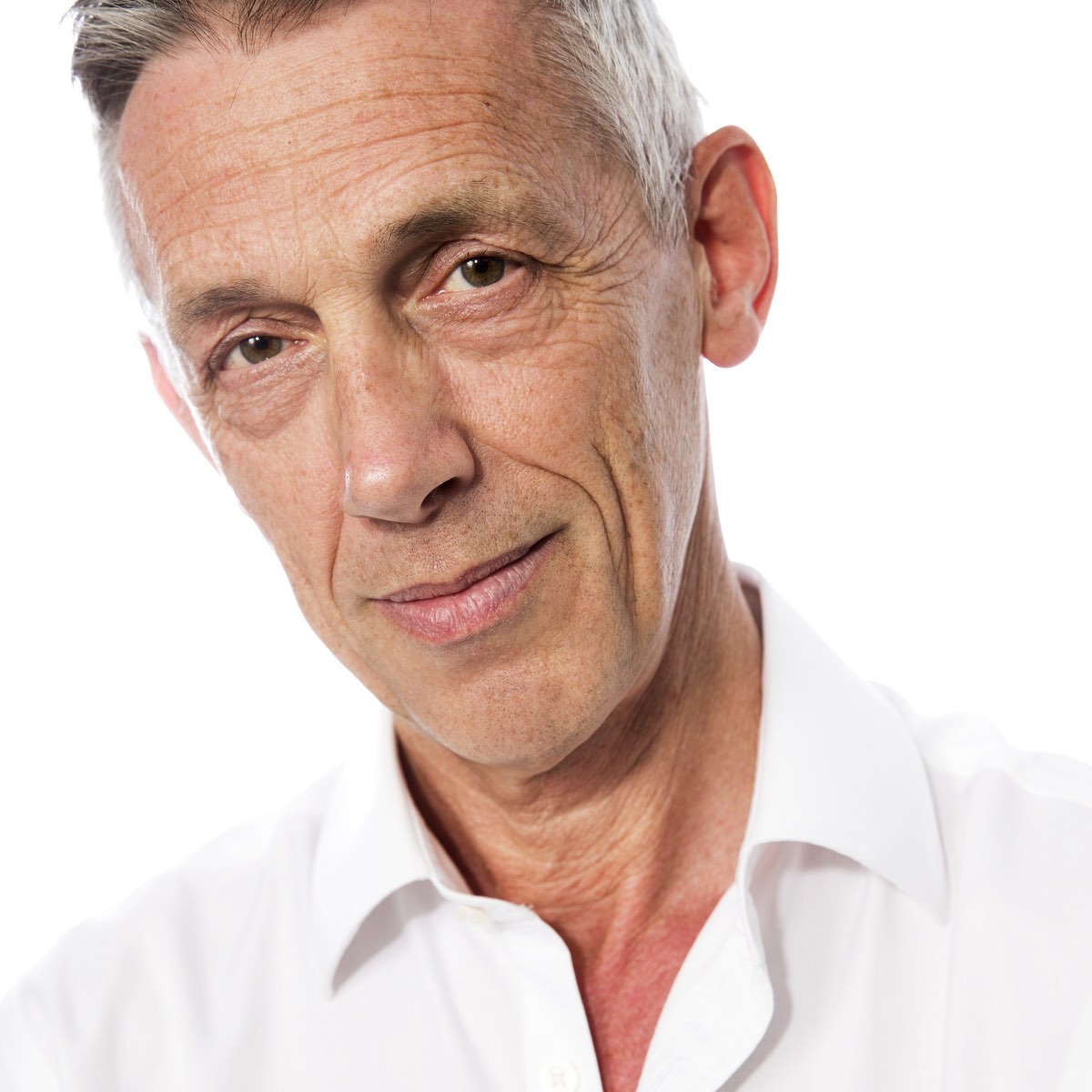 Jonathan Bate was knighted in 2015 for services to literary scholarship and higher education. He is also a British academic, biographer, critic, and scholar. He specialises in Shakespeare, Romanticism, and Ecocriticism as the Professor of English Literature at the University of Oxford, Provost of Worcester College, Oxford, Gresham Professor of Rhetoric, and Honorary Fellow of Creativity at Warwick Business School. His most recent book is the subject of our interview today, and that is titled The Genius of Shakespeare. In his book, Sir Jonathan examines the life of William Shakespeare, the man from Stratford, to outline how one man becomes a genius. We are delighted to have Sir Jonathan here with us today to discuss some of the answers he discovered in writing his book.

In this episode, I’ll be asking Jonathan about :

I'll call for pen and ink, and write my mind. 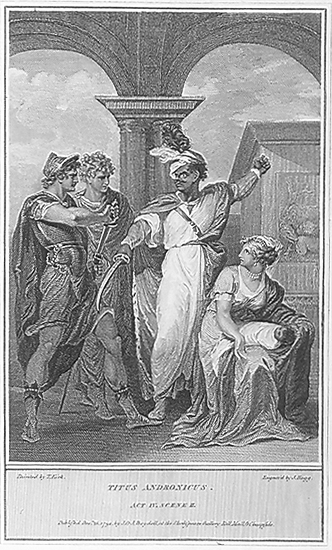 Collaboration among playwrights like William Shakespeare was very common. Like today, the theater industry was a communal environment with frequent overlaps in writers, ideas, and sources.

One of the people William Shakespeare is thought to have collaborated with is George Peele. While it has not been uniformly accepted (meaning a great many people doubt the veracity of this claim) many historians believe George Peele helped Shakespeare write Titus Andronicus.

Other dramatists Shakespeare is thought to have worked with in the creation of several plays include George Wilkins, Thomas Kyd, and Thomas Nashe.

Though my estate be fallen, I was well born,
Nothing acquainted with these businesses;
And would not put my reputation now
In any staining act.

One amazing fact about Shakespeare's legacy is that he remains famous many centuries after his death while similar playwrights like John Lyly, who influenced William Shakespeare, do not enjoy the same legacy.

John Lylye (sometimes spelled Lily or Lyly) was an English writer, poet, dramatist, and courtier. His play Gallathea (sometimes called Galatea) is a comedy most often studied by early modern drama students. It was first performed at Greenwich Palace in 1588 as part of the New Years celebration before Queen Elizabeth I. When it was staged, Lyly was already an established success with the publication of his popular Euphues, a romantic prose piece. Lyle was also a writer in residence at The Blackfriars theater.

Neither Lyly nor Thomas Nashe left any portraits (Check out this really neat article on Shakespeare and portaiture in general here) so I'll leave you this cover art of Lyly's Gallathea. 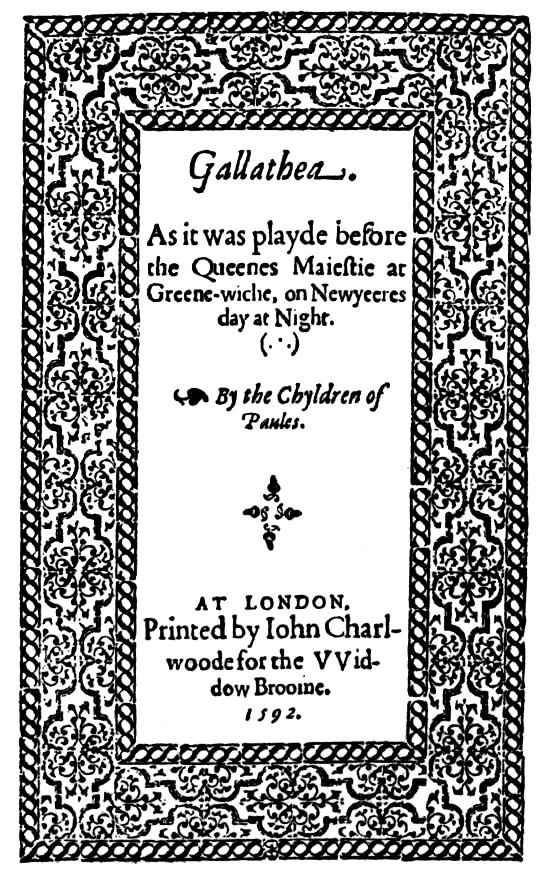 This is your devoted friend, sir, the manifold linguist… 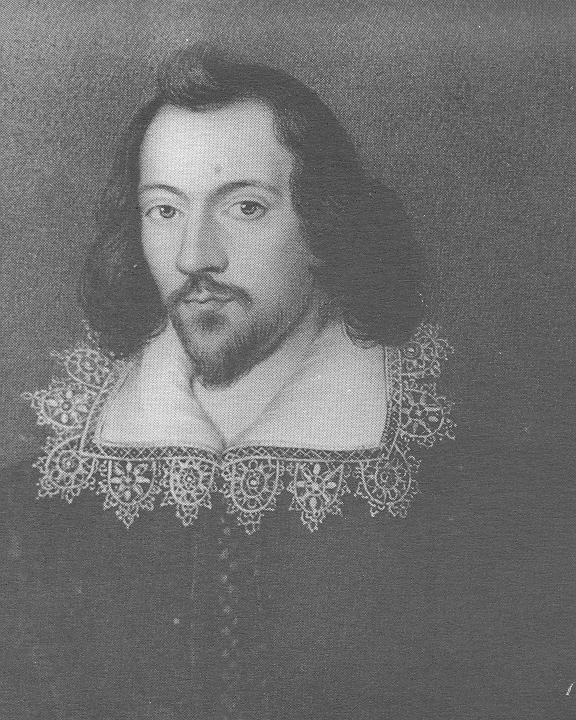 Learn more about Thomas Kyd, and read the article that provides the source for this image here.

Author of the hugely popular, The Spanish Tragedy,  and a good friend of Christopher Marlowe, Thomas Kyd was a man who impressed Shakespeare but ultimately lead such an active political life that he would eventually be imprisoned and tortured for his derision.

His influence on the life of William Shakespeare cannot be overlooked as it is Kyd's play, Ur-Hamlet, which would influence the bard's tragic play, Hamlet.

Additionally, it is thought that Kyd helped Shakespeare write Edward III, which was published anonymously in 1596 when William Shakespeare was 32.

“Let dangers go; thy war shall be with me,
But such a war, as breaks no bonds of peace.
Speak thou fair words, I'll cross them with fair words;
Send thou sweet looks, I'll meet them with sweet looks; Write loving lines, I'll answer loving lines;
Give me a kiss, I'll countercheck thy kiss.
Be this our warring peace, or peaceful war“

From Kyd's The Spanish Tragedy

Very talented at satire, Thomas Nashe would write his first impressive piece of work in 1592, when he publishes Pierce Penilesse His Supplication to the Divell which makes fun of Robert Greene's feud with the writer Gabriel Harvey. The writing would lead to a series of pamphlet wars in which both authors would trade written barbs back and forth through their published works. When he wasn't satirizing his friends in pamphlets, Nashe was collaborating with playwrights like William Shakespeare and Ben Jonson. Nashe worked with Shakespeare on Henry VI Part 1, and he was one of the coauthors with Ben Jonson on the scandalous play which landed them both in jail, Isle of Dogs. 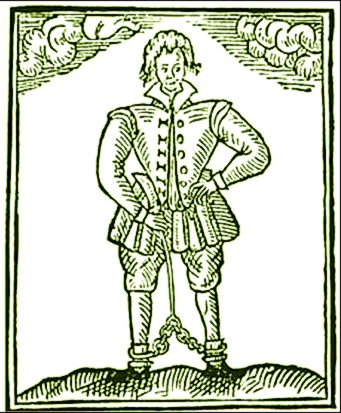 A woodcut showing Nashe with chains on his ankles. From Richard Lichfield's The Trimming of Thomas Nashe, Gentleman (1597)

Download a list of sources, articles, and more places you can learn more about Shakespeare and his collaborators (including the sources used for this week's show notes) when you join the newsletter. You'll be first inline for new episode notifications and fun guides and resources that are only free to email subscribers.

Jonathan recommends that you check out the Folger Shakespeare Library Shakespeare Documented Project, which you can browse online at this link. —-> 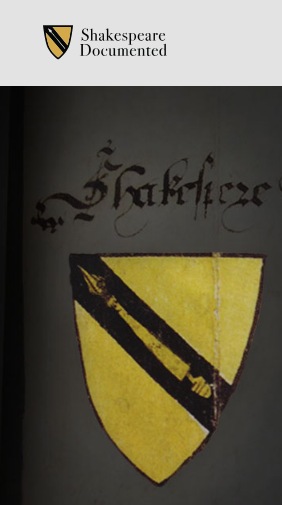 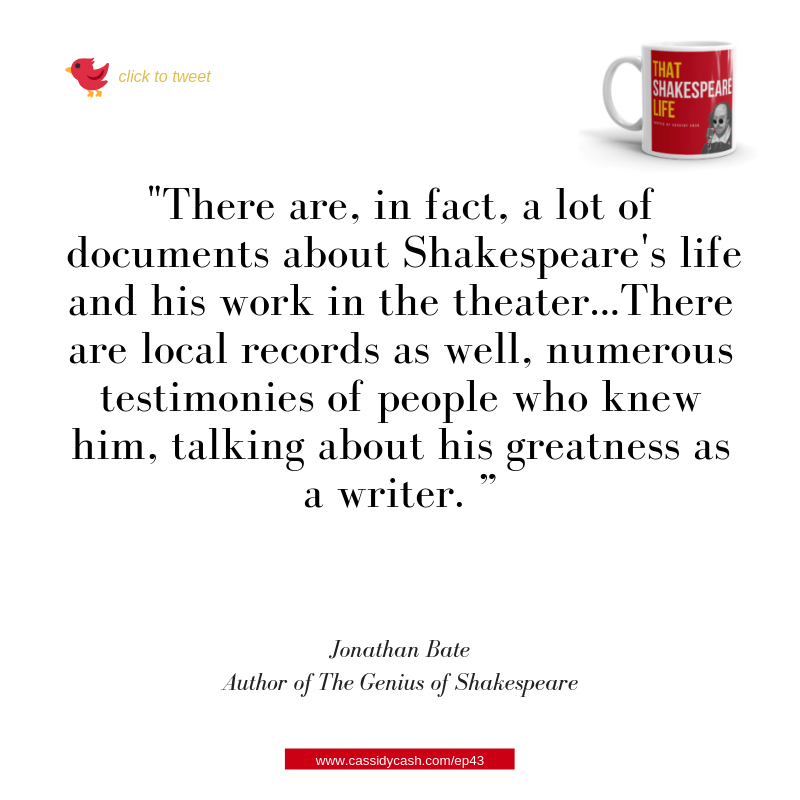