Santa Claus did not exist for Shakespeare, but happily, Sir Christmas did 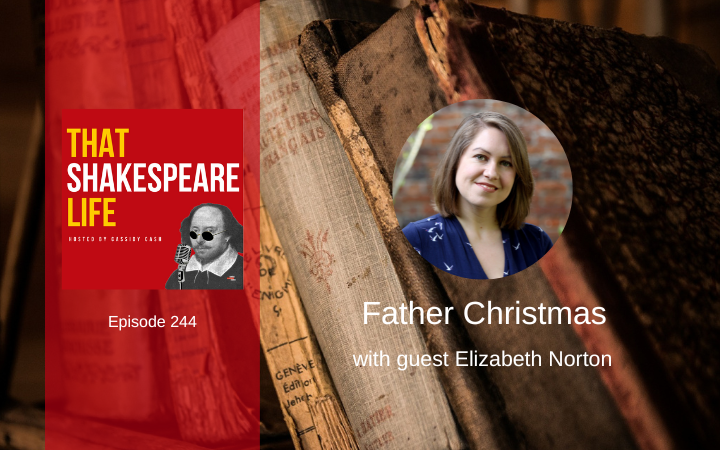 Just like the work of William Shakespeare, our show is powered by patrons. You can become a patron today to contribute directly to our show and access our entire back catalog of over 100+ patron-only episodes.

It’s Christmastime again this year and our thoughts are full of sugar plums, candy canes, and hopefully some beautiful winter snow. Growing up children of the 20-21st century are very familiar with the concept of Father Christmas or Santa Claus as he’s become known today who brought gifts to good children each Christmas Eve. For William Shakespeare, however, the characters and particularly the understanding of Father Christmas would have been quite different. You see, William Shakespeare did not have Santa Claus and Father Christmas. There was one Christmas carol from the mid-15th century that described “Sir Christmas” that travelled around announcing the birth of Christ and offering drinks to passersby. There’s another record from the mid-15th century that describes a traditional Christmas battle between Christmas and Lent during which a parade of the months of the year culminates in the presentation of the King of Christmas riding a horse decorated with tinfoil. These 15th century images of Christmas and the personification of the season come well before Shakespeare’s lifetime and the strict idea we know as “Father Christmas” would not show up until after the Restoration in the mid-17th century. So what did England, and by proxy, Shakespeare, do to celebrate the holiday? Did Shakespeare have a Father Christmas? Here today to help us understand the holiday spirit and the role of characters like Father Christmas during Shakespeare’s lifetime is our guest and historian Elizabeth Norton.

Dr Elizabeth Norton is a British historian, specialising in the queens of England and the Tudor period. She has degrees from the Universities of Cambridge and Oxford, as well as a PhD from King’s College London, where she has taught History. She is the author of twelve non-fiction books, including the critically acclaimed ‘The Lives of Tudor Women’. She regularly appears on television as an expert. Recently, she acted as Historical Advisor and featured contributor on the BBC’s ‘The Boleyns, A Scandalous Family’.

I’ll be asking Elizabeth Norton about:

Twas The Night Before Tudor Christmas by Laura Loney, Illustrated by Katheryn Holeman

Get access to our entire back catalog of episodes (100+ shows) right from the beginning for just $5/month. Listen to our patrons-only RSS Feed PLUS access to all the episode show notes from our back catalog, too. That’s hundreds of shows worth of 16-17th century woodcuts, paintings, museum artifacts, and special bonuses that coordinate with each episode, including bonus downloads and sound files donated by our guests just for patrons of That Shakespeare Life.

Dive in and explore when you become a Patron today!

Father Christmas was a character in the mummers plays

During Shakespeare’s lifetime, there was no Santa Claus figure. That figure would not arrive in England until the 1850s. For Shakespeare, the Christmas holidays were a time of honoring God, the Queen, and elaborate displays of general misrule as one major theme of celebration for the Twelve Days of Christmas. When you saw the character Father Christmas, appear in plays to mark the season, he embodied all the themes related to the holiday itself.

Father Christmas is the personification of Christmas: Captain Christmas, Sir Christmas, Prince Christmas–partying, drinking, and he has a club which he uses in some of the mumming plays in the period.

“When you are hearing a matter between party and party, if you chance to be pinched with the colic, you make faces like mummers; set up the bloody flag against all patience; and, in roaring for a chamber-pot, dismiss the controversy bleeding the more entangled by your hearing: all the peace you make in their cause is, calling both the parties knaves. You are a pair of strange ones.”

Father Christmas and the Giving of Gifts

Father Christmas, the character was not associated with giving presents to good little boys and girls until well into the 19th century. For Shakespeare’s lifetime, Father Christmas was entirely associated with bringing trouble and chaos for amusement. You knew when you saw him show up that things were about to get mixed up.

“The Father Christmas figure was all about trouble, partying, and turning traditions on its head.”

Today, the terms “St. Nick”, “Santa Claus”, and “Father Christmas” are interchangable, but for Shakespeare’s lifetime, there was no Santa Claus, and Father Christmas and St. Nicholas were entirely different people.

St. Nicholas was a historical figure, and within a few centuries of his death rumors associate him with youth and patron saints of youth—specifically a story about three girls who can’t afford dowries and he goes into their house (some versions he goes down the chimney) to put gold in their stockings so they aren’t sold into slavery. Feast day is 6th of December, so he is associated with presents and Christmas time. Dutch children leave shoes out for St. Nicholas to give presents on his feast day. St. Nicholas can be harsh to naughty children.

Father Christmas and the Early British Colonies in America

You might expect the British citizens of Shakespeare’s lifetime to arrive in the New World with their traditions in tact, but it turns out that for the newly arrived group of Pilgrims, at least, the tradition was changed on purpose with their arrival in the American colonies.

The Colonies try to ban St. Nick, in favor of presents coming from the Christ child.

So, it seems, even in Shakespeare’s lifetime, there was lively debate, and a great deal of individual independence, surrounding what the holiday celebrations would look like for each family. One can only wonder what it might have been like around Shakespeare’s table Christmas Day.

Ep 112: Cutlery and Forks with Brigitte Webster
Ep 145: "Cleire Water" with Vaughn Scribner
Ep 162: The Grass Snake and the Basilisk with Rob Lenders