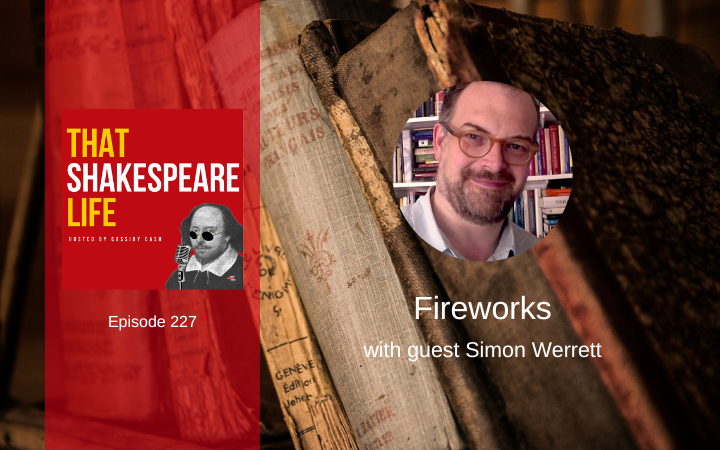 Welcome to Episode 227 of That Shakespeare Life, the podcast that goes behind the curtain and into the real life and history of William Shakespeare.

The technology of explosions to celebrate or mark an occasion of jubilation that we know today as fireworks was a new thing for Shakespeare’s lifetime. Shakespeare mentions the word “firework” only twice in his works, once in relation to a fight in Henry VIII and another time in relation to a show or pageant in Love’s Labour’s Lost. Our guest this week, Simon Werrett is the author of a book on the history and science behind fireworks and he joins us today to share exactly how they worked for Shakespeare’s lifetime, which celebrations were held using fireworks, and what the people of 16th century England thought about this wild and exotic light display.

I’ll be asking Simon Werrett about:

-What technology was available in the 16th century to produce fireworks?
– How were fireworks different from canon fire?
-Were any of these versions of fireworks known to be used for producing special effects in theaters around London during Shakespeare’s lifetime?

Incendiary Art: The Representation of Fireworks in Early Modern Europe by Kevin Salatino

The Shows of London by Richard Altick – Simon describes this book as a coffee table book. Record all the hundreds of different kinds of spectacles and performances and public rejoicing ins and displays in London in the 18th century. It’s an amazing sense of what you could go and see in terms of spectacles in this time.

Disenchanted Night Wolfgang Schivelbush, This is a book about lighting in the night. Darkness, to Torches on the street to gaslighting to electric lighting. The culture that different types of lighting experiences allowed. That’s just part of a bigger history of what we do in the night.

Fireworks made from Gunpowder

Fireworks in Shakespeare’s lifetime were made primarily from gunpowder. Simon outlines that “…the most important [ingredient] was gunpowder: sulfur, salt peter and charcoal mixed together in the right amount to produce an explosion.”

Just like today, pyrotechnics of the 16th century was about control. You didn’t want a fire to go anywhere, you wanted it to behave in the way you chose and specifically for display purposes. Whether the person launching the firework was focusing on a hand canon or a fire wheel, the point was to keep the fire in one place for one purpose. Simon shares that they also tried to change the color of the flames by adding specific kinds of powder.

…they thought if you colored the gunpowder it would change the effect, so if you used red, you added things like sandal wood it would make the gunpowder stronger, we don’t believe that today, but they did in the 16-17th century. Red would do that because it was associated with Jesus Christ’s blood, which had incredible redemptive powers and anything red would new and redeem things, that’s why you do corrections in red today. Monks annotating manuscripts in red today.
Simple effect– you’re only working with paste board and paper, brown paper, wooden sticks and very simple things but you’re wrapping them up and sculpting them in ingenious ways. You are producing a pretty amazing effect out of simple ingredients. We use a lot more chemicals today but those basic.

Fireworks vs Rockets vs Canons

The technology for fireworks, rockets, and canons was not significantly different from one another. The uses for each determined more what they were called than precisely how they worked. As Simon explains,

With a firework, you want to slow down the burning, to produce an explosion but in a controlled way. The design of the rocket is such that it burns slowly but it produces a flame and sparks to make thrust that makes it move. Essentially they are the same thing, in the 16-17th century there was lots of crossover, so people would use canon in fireworks displays, and they would have salutes and the people who did fireworks were usually in the artillery, spending their days wars and canons but their recreation or celebrations would be to make and setoff fireworks. They talked about it being “arte et marte” (art and war)

In exploring the reference to rockets we find in the US National Anthem, which harkens back to the war of 1812 with Britain when the US was watching rockets fly overhead. In questioning whether those type rockets were the same as 16th century fireworks, Simon shares that essentially, they are, yes:

The main difference between a firework and even the 19th century when the rockets red glare was referred to between that and the earlier period, people were less familiar with fireworks. So if the government put on a big fireworks display, that potentially would be the only time you saw those and it might only happen once in a lifetime. A big fireworks display was a rare thing in England at least, they were first introduced in Shakespeare’s lifetime. So they were quite an unusual experience and people were afraid of them so there was a firework in 1575, for queen Elizabeth I, one of the visitors said “vengeably afeared” a tough courtier was still pretty sacred at this experience. There’s another account of fireworks from Shakespeare’s time that said “terrible to those that have not been in like experiences and indeed strange to them that understood it not” quite an advanced tech that people didn’t really understand, so it was strange.

The “vengeably afeared” quote is from Robert Laneham (or Langham), A letter: whearin, part of the entertainment vntoo the Queenz Maiesty, at Killingwoorth Castl, in Warwik Shee´r in this soomerz progress 1575. iz signified: from a freend officer attendant in the coourt, vnto hiz free´nd a citizen, and merchaunt of London (London, 1585). This is also the source for the short description Simon reads out (in modernized English):

“A blaze of burning darts, flying to and fro… streams and hails of fiery sparks, lightnings of wildfire on water and land, flight and shot of thunderbolts: all with such continuous terror and vehemency, that the heavens thundered, the waters surged, the earth shook.”

It was very much a standard part of 16th century theater performances to have fireworks used on stage for a variety of special effects.

One such important special effects in addition to the lightning that you might guess, was actually for fire breathing dragons.

Simon shares that while fireworks were industry standard for the period, they were still dangerous. Despite the danger, one of the most common places to see fireworks on display was actually going to church, where fireworks were used to recreate the power of God in church plays:

It was pretty common to have fireworks on the stage. They were very aware of the risks, but risks was part of what makes fireworks exciting, and still is, so having lots of bangs and flashes is a good thing. They used fireworks on stage in displays and fireworks originated as a kind of way of simulating the holy spirit coming down in a church, gunpowder spark emanating a squibble or a rocket or something coming down from the dome of the church into the ground level and that was used in church plays. Whenever they wanted to have lightning bolts they could use that kind of effect

Fireworks were used to delight, to scare, and to entertain people of the 16th century similarly to how they are used today. One famous place these fireworks were used to be impressive was when Robert Dudley was trying to woo Elizabeth I in 1575, when a young William Shakespeare was just 11 years old.

The display put on for queen elizabethan in 1575 was a much more private affair, it was part of her wooing by Dudley the Earl of Leicester. His brother was in charge of the artillery, handy because he was available to put on fancy fireworks displays for his would be girlfriend, so there’s several put on for her in the 1570s, but those were invitation only. The regular folks didn’t get to see them, though there are records of people being disrupted by fireworks in nearby villages.

The display put on by Robert Dudley is one of the most famous examples of performances and fireworks from Shakespeare’s lifetime, but it was not only high level private events that would have used fireworks. Public occasions often called for fireworks, too.

[When it comes to public fireworks displays,] there were two different kinds of displays. You would use fireworks for occasions of public rejoicing, in England in Shakespeare’s lifetime there’s two of those: The Lord Mayor’s Show celebrating the lord Mayor of London, barges floating down the Thames, adorned with banners and flags, pennants, musicians, and master guardsman would be setting off fireworks as the barges progressed. The other thing was the Queen’s Day, anniversary of the queen’s ascension to the throne, they celebrate that with bonfires, feasts, ringing church bells and maybe fireworks as well…Guy Fawkes remembrance used fireworks and this is still celebrated this way today.

The “strange to them that understood it not” account of the fireworks from the 16th century that Simon references today is from an account in the compilation of festival records made by John Nichols, The Progresses and Public Processions of Queen Elizabeth I, 3 vols. (London, 1823), vol. 1, pp. 319-320, describing fireworks in Temple Fields for Elizabeth in August 1572. Nichols is citing the Black Book of Warwick, an anonymous manuscript account of the event written at the time.

November 17th was ‘Queen’s day’, celebrating the accession date of Elizabeth I as a Protestant holy day marked by festivities, between 1568 to 1602. In 1573 the Oxford corporation celebrated with fireworks, in addition to sermons, bell-ringing, organ music and almsgiving. Maidstone also gave fireworks. Northampton staged a mock battle around a temporary castle  on the river. This comes from Ronald Hutton’s book on English folk festivals, Stations of the Sun: A History of the Ritual Year in Britain (Oxford University Press, 1996), p. 387.