History Of the Game Maw

History of Maw the Card Game

Maw was an extremely popular card game during Shakespeare’s lifetime. Popular even under Elizabeth I, the game would achieve official status under James I as the chief card game of the English court. King James himself is recorded in numerous places as being keen on the game, preferring to play it over other amusements. There’s even a piece of satire from 1626 which, in an artistic engraving, shows King James playing cards with the King of Demark and they are playing the game of Maw.

While the word “maw” is used in Shakespeare’s plays, I was not able to find a quote which was definitely a reference to the card game, though many a pun is plausible. Most of the uses of the word “maw” in Shakespeare's plays employe the definition meaning “jaws or throat of a voracious animal” (as defined by the Oxford English Dictionary). However, there are references from Shakespeare’s lifetime that teach us about the popularity of the game:

The 1593 book, Greene's Newes from Heaven & Hell to the Reader, states:

“Although the knave of trumpes be the seconde carde at Mawe, yet the five-finger may commaunde both him and all the rest of the pack.”

Additionally, the book Court and Character of the King (1603), records the King’s chief card holder as saying:

“His Majesty appears to have played at cards just as he played with affairs of State – in an indolent manner, requiring in both cases someone to hold his cards, if not to prompt him what to play.”

That’s not a very favorable comment to make about the King, but it does demonstrate how prolific the King’s playing of this particular card game became during this reign.

Lastly, the caption beneath the engraving showing James I at play with the King of Denmark reads:

Deales freely round; and the first card he showes

Is the five finger, which, being turn'd up, goes

Cold to the Muncke's heart; the next Denmarke sees

Is the ace of hearts

The Muncke could shew him nothing but the Knave.”

Truly a relic from specifically the 52 years Shakespeare was alive, Maw represents one of many card games which would go on to be outlawed under a Purtian government in England, making it a real sample of the bard’s life, since the game and many others, died out during the Common Wealth period later in the 17th century.

The official rules of Maw are outlined inside The Groom Porter's Laws which appear in Ancient Ballads and Broadsides published in England in the sixteenth Century… as preserved in the Library of Henry Huth, London, 1867. I found this information on a page for Partlett Games where he says “There is a copy in the Bodleian Library. I am grateful to Thierry Depaulis for communicating this discovery.” Source: https://www.parlettgames.uk/histocs/maw.html#two

You can see the list of the laws for how to play on pages 123-125 (though the digital bar at the bottom will tell you it's pages 121-123, but that does not correspond with the page numbers listed on the pages themselves). 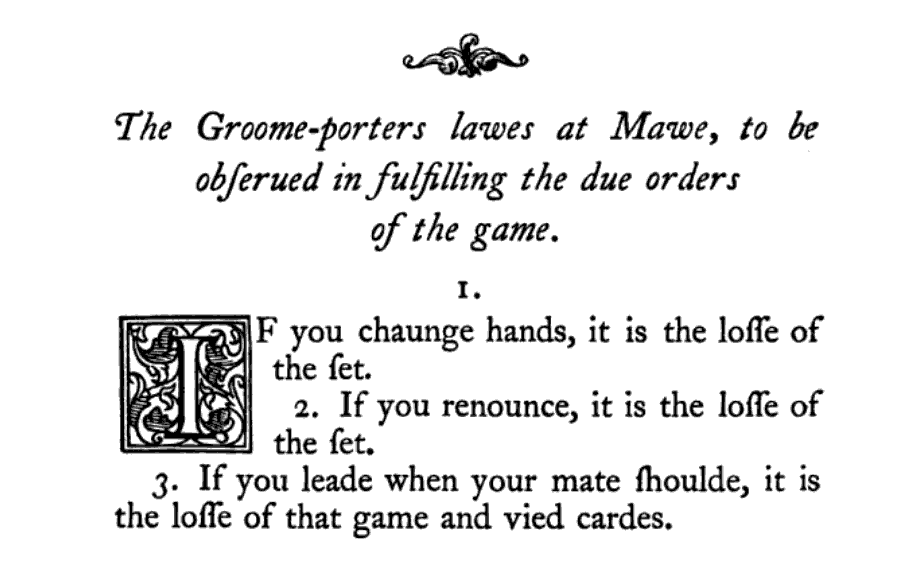 The reference to the King's Card Holder occurs in The Court and Character of King James by Sir Anthony WeldonJanuary 1, 1650 | Pg. 35

Some other references you might enjoy if you really want to dive into the history of this game are these excellent books:

Screen capture of “Researches Into the History of Playing Cards: With Illustrations of the ...”

By Samuel Weller Singer | Pg. 259 and one of three references to Maw in this book | Available as a free ebook at the Google Books link above

This 16th century text accuses King James of postponing a criminal execution because he wanted to finish a game of Maw. Source  It is written by Anthony Weldon, who is notoriously critical of James I, but hilarious nonetheless.

The reference to the King's Card Holder occurs in The Court and Character of King James by Sir Anthony WeldonJanuary 1, 1650 | Pg. 35

Also available at the National Library of Australia

Some history scholars believe the Match Me in London play by Thomas Dekker is a play (pun intended) on the word “Match” which is used to describe the turn of play in the game of Maw. As Robyn Knulston pointed out in conversation with me about this game,

“Nineteenth-century scholars, always eager to identify a lost play as an extant one, made an unenthusiastic connection between the Henslowe play and Thomas Dekker's Match Me in London, which (as I'm sure you know) includes but by no means features a game of Mawe (not “featured” in the sense of being so prominent as to justify calling a whole play that). Scholars have also “revised” Henslowe's wording of “seat” to be “set,” a word they think more likely for a play named for a card game but a word that has no evidentiary basis. And there the conversation ends.”

She provided this photograph to go along with her reference:

Walter Wilson Gregg (who I'm guessing is one of the 19th century scholars Dr. Knulston is referencing, since he calls the connection “incidental”) seems to suggest he thinks Match Me in London and Set/Seat at Mawe might be the same play, but recorded under different names when performed by different players.

He calls attention to Match Me in London being performed by Queen Anne's Men (Henslowe's Worcester's Men officially patronized) in 1630, while Seat at Mawe was performed in 1594 by the Admiral's Men, so I don't know that I agree with him that there's evidence from just that to suggest they are the same, though it might suggest plays about card games was popular.

I do think it's relevant than a main part of the game, Maw, is the Jack, which is one of three trump cards in the game. If the play is about personifying the characters of the game (and obviously we have to guess since we don't have a copy of the play itself), but capitalizing on the title, “Set at Maw” then the Jack/Knave/Fool character would have been a primary role, and Will Kempe (known for playing the clown/fool character) was with Queen Anne's Men until his retirement, and while he died in 1603, and therefore could not have appeared on stage in Match Me in London from the Stationer's Register's recording of Dekker's play in 1630, but he very well could have been the Jack character in “Set at Maw” from 1594 BUT that date suggests it's under Elizabeth, not James, despite James having the greater reputation for liking the card game of Maw.

Since Elizabeth was still Queen in 1594, and the Groom Porter's Laws titled “A collection of seventy-nine black-letter ballads and broadsides, printed in the reign of Queen Elizabeth, between the years 1559 and 1597 : accompanied with an introd. and ill. notes”  If the title is accurate about the date, that means that Elizabeth I had an official set of rules for Maw at her royal court. Mary Queen of Scots (James I mother) is credited with having introduced Maw to the English court in the first place.

Martin Wiggins (Martin Wiggins, British Drama, 1533-1642: A Catalogue, vol. 3 (Oxford University Press, 2013), entry 976.) makes the case that the traditional names for the various card games could make for a type of murder mystery play, using the characters of the card game as their basis for a plot.

In A Manual for the Collector and Amateur of Old English Plays by William Carew Hazlitt, he says that Henslowe also called “The Set at Maw” simply “The Maw”, and goes on to suggest that there is a record in the Revel's Accounts, which defines “set at Maw' to be “A Comedy or Moral devised on a game of the Cards on St. Stephen's Night bt the Children of the Chapel.” Cards being an acknowledged way to celebrate holidays in  Shakespeare's lifetime, it makes sense to me they would have done as Hazlitt claims and mark the occasion with a celebration of the card game on stage.

Robert Chambers in his The Book of Days: A Miscellany of Popular Antiquities in …, Volume 2 explains the game this way:

The preceding page in that book Chambers also says that Maw succeeded Primero as the most popular game at court, under Elizabeth I, (displayed on stage by Shakespeare in Henry VIII who has the King play Primero with the Duke of Suffolk) which backs up the contention both that playing cards was popular stage fare, and that the Groom Porter's Laws at Maw, dated within Elizabeth's reign, was popular under Elizabeth as well as later with James. (Elizabeth's sister Margaret is said to have played cards with Scotland's James IV–and Maw is considered a Scottish game originally. I wonder if that's where she picked it up, especially since Primero is thought to have been made popular in England by Philip of Spain after his marriage to Mary–there's at least a precedent for card games coming into fashion in parallel with suitors of England's royalty).

As a side note, I think it is very cool that Roger de Coverly sent “pudding and a deck of cards” to every poor family at Christmas. It would appear that games, and cards in particular, were a favorite and cherished part of the holiday season not just for the royal courts, but at all levels of society.