Did Shakespeare have tea? 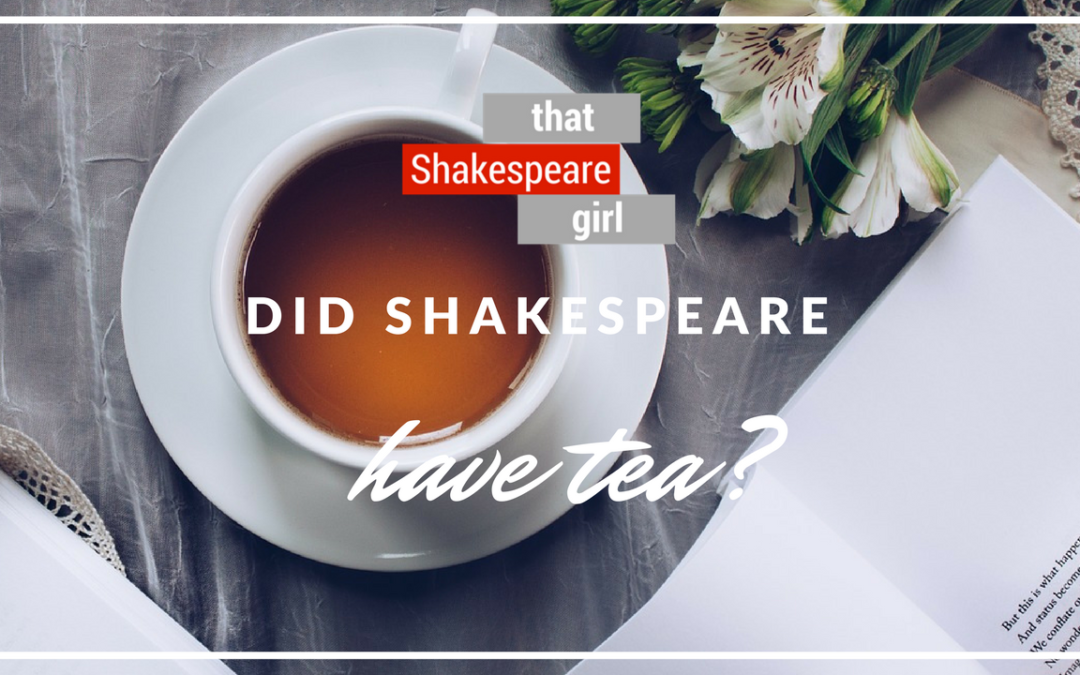 There’s hardly anything we consider more quintessentially British than afternoon tea. It’s right up there with Queen Elizabeth as something unique to England.

However, when it comes to William Shakespeare, the truth is that this delightful British tradition wasn’t likely on his menu.

We explore the history of afternoon tea in this episode, when we ask “Did Shakespeare have tea?”

The tea plant finds it’s beginnings in China. The Far East, as it was known to England since around the 12th century, has a long a storied tea tradition. However, the now humongously popular little drink first made it’s appearance on English shores during Shakespeare’s lifetime.

As a side note, It was British colonialism that created the term “Far East” and that, along with the term “The Orient” have no fallen out of favor but it was surprising to me to discover that East Asians, from China in particular, had a similar term meaning “Far West” which they used to describe anything further West past the Arab world. So apparently, everyone has their generalities.

It was the focus on British colonialism that also created an intense drive towards exploration. Without such exploration, it’s doubtful that England would have their iconic afternoon tea.

Depending on which historical reference you want to believe, the year 1610 is when shipments of tea to England became a regular occurrence. That’s the same year Shakespeare wrote The Tempest. That places the very first shipment of tea prior to that, in the late 16th century, around the time William Shakespeare was in grammar school.

So while William Shakespeare would have known of tea, it’s doubtful he would have enjoyed tea as a regular beverage during his mealtimes and he absolutely did not have afternoon tea as we think of it today.

The tradition of afternoon tea wasn’t observed in England until the late 19th century, when it was made popular by England by Anna, the seventh Duchess of Bedford, in the year 1840.

Which is one reason why you won’t find any references to tea in Shakespeare’s plays, sonnets, or reference texts from that time period.

Here’s what we do know about tea in Shakespeare’s lifetime:

1600 was when Queen Elizabethan first established The British East India Trading company, whose job it was to travel to places like China, India, and other areas of Asia to trade in spices that included tea. Political factors would influence the trade, however, and the tea trade wouldn’t pick up until the 1670s.

Tea was considered very much a “French thing” for most of Shakespeare’s lifetime with the drink becoming popular among Frenchman before the English. Interesting, while coffee is considered more of an American drink today, it was coffee that first invaded England with coffee houses having established themselves by 1583, which William Shakespeare was marrying Anne Hathaway and having his first daughter. Making William Shakespeare one of the first parents to use coffee to stay awake with a new baby in the house? Possibly. I’d certainly like to think so.

Now before we put this question completely to rest this week, we need to ask: While Shakespeare did not enjoy high tea, or afternoon tea, could he have drank the beverage at all?

Well, possibly, but probably not.

The first record of tea in England is found in a letter from a merchant dated 1615. That’s one year before Shakespeare died, and of course it’s just one letter. So does the letter indicate the drink was being consumed prior to that and the letter is just evidence of one year in which tea was consumed? There are so many questions.

We do know that by the 1700s tea was being sold in shops in London. We also know it was the East India Trading Company that Queen Elizabeth established which was bringing back the tea. And whenever shops are selling it and companies are going to the expense of importing it, it means that in the general population there was demand.

So someone in England was definitely drinking tea and enjoying it during Shakespeare’s lifetime, but was it William Shakespeare? Probably not.

In case you’re curious, the cup and saucer was just as late to the party as tea itself, and wasn’t fashionable in England until the 1800s. So when you watch Shakespeare films or adaptations, you don’t—or at least shouldn’t—see anyone—even the English—drinking tea from a cup and saucer.
If you enjoyed this video, please hit like and subscribe. When you support videos like this one by liking it and subscribing to the channel it helps the information about Shakespeare reach more people. And as You know, as Shakespeareans, we love to have friends. So come be our friend and subscribe to the channel! I’ll see you next week!

Research that went into today’s episode (and places you can explore further):

If you like this topic and enjoy books, here are a few on Shakespeare and Tea. I include these because I know you are the intelligent, learning, type person who enjoys reading (and so do I!) Instead of just including regular links, I added affiliate ones here because I like teaching people about Shakespeare and earning a small commission on the sale of books like these makes it so I can continue to do that, and to do it well. If you purchase from these links, it’s not more expensive for you, it just helps us keep the lights on. Thank you!