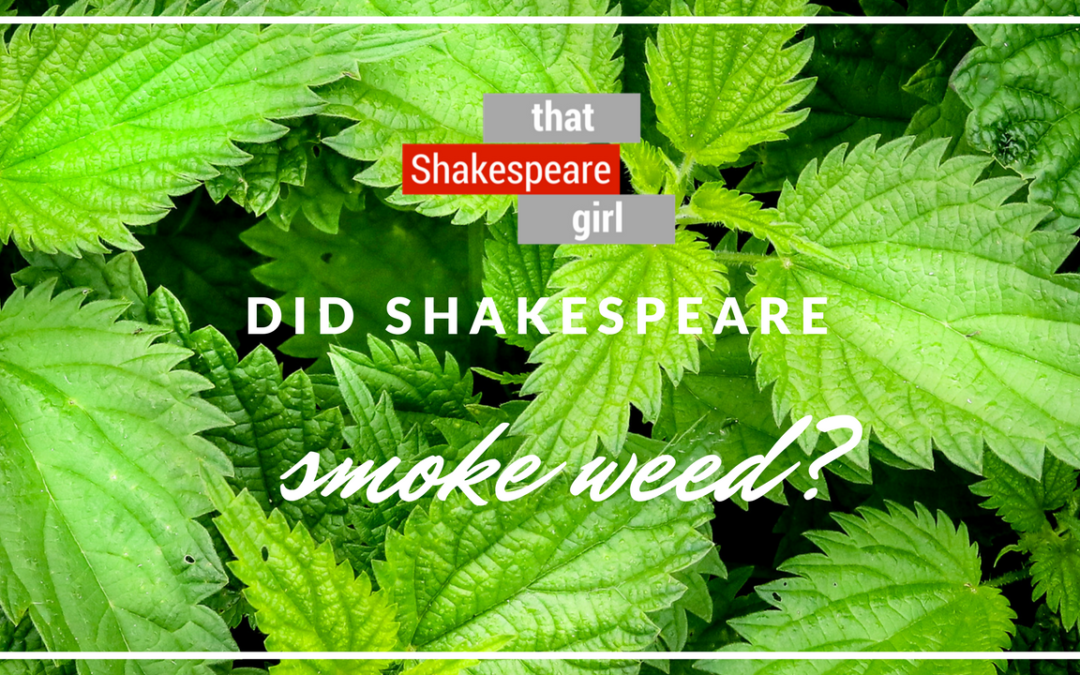 Cannabis, or more commonly known as weed, is a hot topic in the US right now because several states are beginning to institute marijuana as legal to use medicinally.

Turns out, it may have been not just legal, but popular, in Shakespeare’s day as well. Watch Now:

Back in 2015 scientists ran tests on a set of pipes found in Shakespeare’s garden and found traces of cannabis, which led many to assume that meant Shakespeare himself smoked weed.

While I’m sure that conclusion is the most fun, and certainly finding cannabis in the pipes at Shakespeare’s garden is evidence, it doesn’t really tell us much.

So many questions deserved more investigation, so here’s what I was able to find out.

The 52 years that Shakespeare lived on this Earth saw England massively focused on exploration and colonization of North America. When Shakespeare was just 21 years old Sir Walter Raleigh was all fired up about hemp. You see, Englad was facing some heavy commercial debts and wanted desperately to be free from owing that money abroad.

Explorers travelling to the Americas found that hemp grew wild there and it was exciting to think cash was waiting literally to picked from the ground. What they discovered was that American hemp wasn’t the same as European hemp, and it was not nearly as strong as cannabis.

However, there was a huge demand for cannabis at the time, so the idea of using the new colonies as a place to grow cannabis fascinated the nobility of the day.

In 1611 the crown issued formal orders for the colonies to grow hemp.

What they didn’t plan on was the popularity of the American tobacco plant. It was outpacing hemp and the late 1600s would see royal proclamations and incentives abound trying to talk the colonists into growing hemp.

In addition to hemp and cannabis, cocaine was popular in Elizabethan England with Sir Francis Drake brining the Peruvian variety back from his travels and explorations in 1597, when Shakespeare was 33 years old. This was the same yeare Shakespeare purchased New Place, which is the estate where the gardens these pipes which set off a marijuana firestorm were originally found. It was Shakespeare’s Birthplace Trust who owned the pipes and lent them out for testing.

The economic particulars involved in the trade and export/import of cannabis, cocaine, and hemp is much longer than we can cover in today’s episode. What we can reasonably conclude from all this, though, is that plants were extremely popular in Elizabethan England and trying new kinds of plants.

As we covered a little in an earlier video on this channel, coffee was another plant whose use was finding it’s way into proper English society during Shakespeare’s lifetime.

So plants in general were a great source of curiosity and debate.

Some scholars who were studying the clay pipes found at Shakespeare’s garden cite the use of the word “weed” in one of Shakespeare’s sonnets as evidence Shakespeare might have experimented with the substance.

That’s clever textual criticism and takes pain to avoid intentional fallacy by completely neglecting the life of the author and only serves to point out the main point I like to tell you very often:

If you want to understand Shakespeare’ works, you ave to study them in context of Shakespeare’s life. Cannabis gives us a great example of this fact.

You see, according to the OED (Oxford English Dictionary and otherwise known authority on all things words), records marijuana as not entering the English lexicon officially until the late 1830s.

However, the online etymology dictionary does record that the word “Weed” , as applied to mean “tobacco” was in use from the year 1600. So, while all the dictionaries I consulted concede that the word “Weed” could mean anything from a grove of trees, to tobacco, to the act of removing unwanted plants from a garden, Shakespeare, if he was indeed talking about a smoking substance rather than any of the other less drug addicted terminology, was most likely talking about tobacco instead of marijuana.

It is interesting to me tat so many people take offense at the idea of Shakespeare smoking weed, however. The Beatles smoked and drank and took drugs, but no one is offended by that. I guess Shakespeare is supposed to be pure, and above needing substances to write his best work.

I’m not sure why evidence that suggests he might have smoked weed matters beyond curiosity and interesting history, really. Perhaps if you are offended, you wouldn’t mind sharing your thoughts with me?

Some historians claim it was Christopher Columbus who first brought tobacco to Europe in the late 1400s. Sir John Hawkins is credited with brining the plant to England specifically in the late 1500s, right around the same time Shakespeare was born.

In addition to being a time of exploration it was also a time of medicinal experimentation, with tobacco, for example, being suggested by doctors for the use of everything from hang nails to cancer. King james wans’t convinced tobacco was that great, he seemed to hate the stuff and issued proclamations against it.

Which is why I find it incredibly ironic that marijuana has gone in my lifetime from being a banned and awful substance that only gets people high, to now being accepted again as a medicinal application for cancer, just like it was in Shakespeare’s time.

Perhaps instead of asking whether or not Shakespeare was high, we might try to ascertain if Shakespeare had cancer? Perhaps he was smoking medicinally? Of course, there’s not really anything to suggest he himself was actualy smoking at all. But it is certainly a fun question to consider.

Interestingly in Ben Jonson’s Every Man in His Humor, two of the characters argue over tobacco.

3 years later doctors are complaining to King James that people are able to get tobacco without a prescription.

Interestingly, it was Pocahontas’s husband, John Rolfe, who raised Virginia’s first commercial crop of tobacco in the year 1614 when Shakespeare was 50 years old. That was the same year that his hometown of Stratford Upon Avon burned to the grown, at least 54 dwellings were destroyed. Shakespeare’s home was spared, but he was a town leader and as such was involved in the legal proceedings which took place to restore the town.

So he was incredibly busy. However, his company: The King’s Men were performing at court. The same court where John Rolfe and his wife Pocahontas would have appeared to make a report to King James on the Virginia crop. During the winter of 1614-1615 the King’s men performed at court eight times.

That’s less than what was typical for them, but of course as we’ve mentioned the fires at both The Globe theater and Stratford could have kept Shakespeare himself too busy to run into such historical figures at court. Who knows? I don’t, but I think the overlap is intriguing.

Perhaps I’ll cover that in a later video.

We’ll wrap up this little cautionary tale by saying that smoking, tobacco, pipes, nicotine, and cocaine were all used recreationally in England in Shakespeare’s time.

It was popular, fashionable, and common for nobility to carry pipes and smoke them.

Do we know if the pipes found in Shakespeare’s garden were really his? No.

Do we know if he himself actually smoked them? No.

Does it seem entirely likely, given the circumstances of the day, the fact that the pipes were found on his property, and that tobacco, cocaine, and marijuiana were popular, easy to get, and fashionable among people Shakespeare looked up to, like Queen Elizabeth, make it seem reasonable to allow Shakespearecould ave smoked weed?