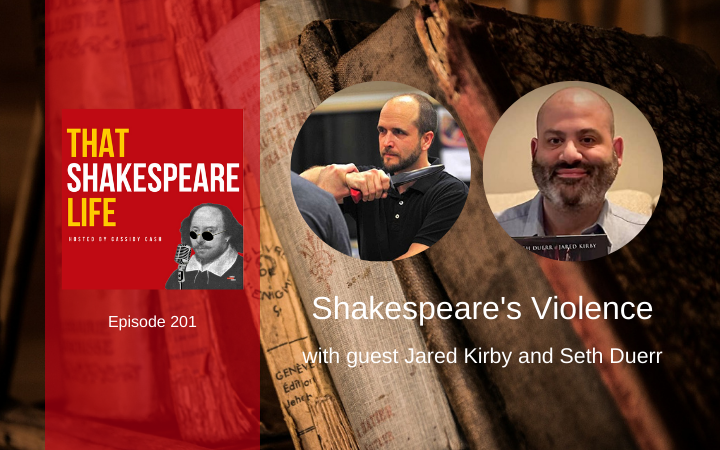 Welcome to Episode 201 of That Shakespeare Life, the podcast that goes behind the curtain and into the real life and history of William Shakespeare by interviewing the experts who know him best.

Violence shows up in Shakespeare’s plays in the form of fights, sword play, and even torture (among several others). These powerful scenes are based on physical action that isn’t directly written about in the scripts of his works. For example, when Ophelia goes mad and demonstrates her madness on stage, we know for certain what she says during that scene because her lines are written out for us but it’s unclear what her physical movements should be on stage. Similarly, in other acts of violence like fight scenes, brawls, riots, or acts of domestic abuse that happens within Shakespeare’s plays, it is up to interpretation of the director as to how the actors would have performed. Our guests this week, Jared Kirby and Seth Duerr, have decided to take some of the guesswork out of these scenes by investigating the history of fights, physical violence, and stage performance to determine what kind of actions should accompany the fights, assaults, struggles, and foul play in Shakespeare’s plays.

Please leave a comment and review our show on one of these great podcast platforms.

Meet Our Guests This Week:

Seth Duerr is the Founder and Artistic Director of The York Shakespeare Company, and has appeared in and/or directed 34 productions of Shakespeare. He is a proud member of Actors’ Equity Association, SAG-AFTRA, the Society of Stage Directors and Choreographers, and serves on the Advisory Board of Wingspan Arts. www.sethduerr.com

Jared Kirby has been involved in Combat for Screen & Stage and Western Martial Arts for 25 years. He teaches in New York City (nycstagecombat.com) and has choreographed fights Off-Broadway, Nationally, in London and Sydney. Jared is a member of Actor’s Equity and SAG/AFTRA. As a Fight Coordinator, Jared has worked with stars such as Peter Sarsgaard, Steve Guttenberg, Cameron Douglas and has trained performers who are working on hit shows. His books include “Italian Rapier Combat” by Capo Ferro, “The School of Fencing” by Domenico Angelo, “The Gentleman’s Guide to Duelling,” and a reprint of Donald McBane’s “The Expert Swordsman’s Companion.” Most recently he is the co-author of “Staging Shakespeare’s Violence, Vol. 1.” www.jaredkirby.com

In this episode, I’ll be asking Jared Kirby and Seth Duerr about :

Bring some of the history home with you! You can learn to fight with a rapier and dagger using one of our activity kits that turns this style of fighting into a home or classroom activity when you become a member. Browse all of our activity kits that work like science labs for Shakespeare history PLUS enjoy all the other benefits of being a member here at That Shakespeare Life.

In Shakespeare’s Hamlet, one of the most moving scenes is when Ophelia goes mad. In the book, Staging Shakespeare’s Violence, Jared and Seth outline that Ophelia’s actions are up to interpretation but say that she should at least, “have a bruised wrist and sore arm, and still be dealing with the shock of what has occurred.”

Hamlet II.1, Ophelia’s reporting her interaction with Hamlet to her father. She explains how he grabs her in that scene. The scene is frightening and an element of their relationship. It’s not always performed on stage that their relationship is violent. Their suggestion is to bring the violence into the performance and show it on stage that Hamlet is violent to her. Especially as it related to the nunnery scene and the madness scene, it changes how those play out.

I was surprised to see Ophelia’s performance of madness listed in the book on Shakespeare’s Violence as I consider the violent part to be her suicide, which isn’t really violence played out on stage, but instead the aftermath of her choices are explained in a verbal description. Seth explains how they decided on domestic abuse for Ophelia:

As we evaluate Polonius, we have to examine all the things that aren’t necessarily laid out on the script (or from 400 years of interpretation). One of the things that jump out for me is that…we know that Polonius uses her as bait..and if you’re willing to use your daughter as bait for someone you believe to be violent, it’s not indicative of a good father.

There are major differences in acceptable violence for the 16th century compared to today. Determining what was considered shocking for Shakespeare’s lifetime is not always straightforward, particularly when the subtle references in the play are surprising, or even weird. As Seth explains here about one scene in Macbeth, knowing how to stage the production can be a huge challenge:

Act i scene 7, Macbeth decides he’s not going to kill the king, big soliloquy in the first act. Lady Macbeth loses it over his decision and says, not we are. She mentions a passage about breastfeeding a child and Macbeth changes his mind suddenly. That’s a huge unanswered question and you have to deal with it in your production.

In the play, Macbeth, the text of the dialogue indicates that Lady Macbeth “rubs her hands” for a quarter of an hour.” This action indicates her madness. Yet, Seth, in your notes for Act V Scene 1, your instructions to Lady Macbeth in particular specifically states “…your Lady M should avoid two things: (1) wringing or rubbing her hands to the point where she starts bleeding; (2) setting herself on fire with the taper.” It makes sense that catching yourself on fire with a taper would take the show in a completely different direction, the hand rubbing instructions is rather pivotal for her character there. Seth explains that their tongue-in-cheek rhetoric in the book is designed to highlight the first rule of stage fighting: Every Stays Safe.

The actor playing Lady Macbeth should not be bleeding but the character could. The first rule of stage violence is no one gets hurt. But the audience doesn’t need to be in on that safety.

Whatever we do (even catching ourselves on fire with a taper), we do it so that no one actually gets hurt. As Seth and Jared point out, the magic of theater is found in the audience’s perspective where, “There is not a single moment in production when the audience should be thinking about the safety of the actor.” They go on to instruct choreographers that “only those involved in the production need know the fight is safe. Please let the audience fear for these people. This is the playwright’s intention.”

From scene in King Lear when Regan pulls hairs from Gloucester’s beard, to more grotesque things like the pie in Titus Andronicus, Jared shares that we really don’t know precisely how the stage effects were accomplished in the 16-17th century. Beyond what we can surmise from inventories like those of Philip Henslowe, there are surprisingly few records to indicate what the specifics were surrounding the performance techniques for things like gauged eyeballs or spurting blood.