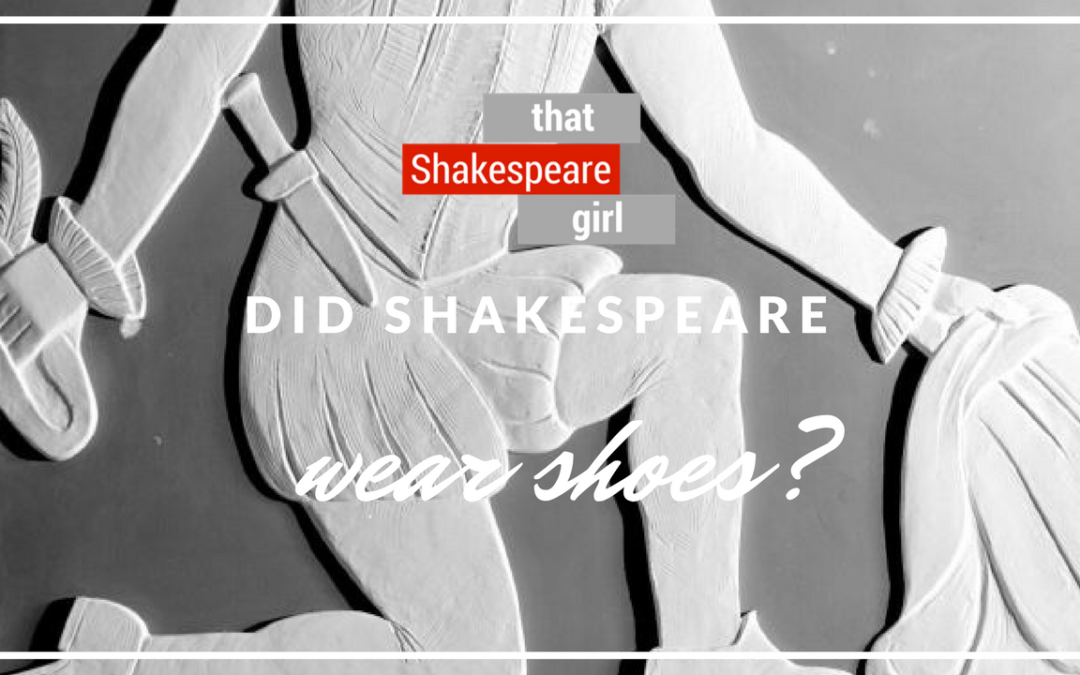 My name is Cassidy Cash

Each week we go exploring into early modern England and look specifically at one very narrow aspect of William Shakespeare’s 52 years on planet Earth.

He lived from 1564-1616 and these episodes focus on stepping inside those years to explore what it was like to really live there.

This exploration informs your study of Shakespeare’s plays because so much of the real life of day to day living in London makes it’s way into the dialogue of the play itself.

So to start our conversation this week on the real life of William Shakespeare, we are asking the question:

At first this probably sounds like a silly question because “of course they wore shoes!”

But the shoes of the 16th century were very different from today and especially if you are trying to stage a re-enactment or put on a historically accurate production of Shakespeare’s plays, life, or times, it’s important to know the difference between the right kind of shoe and the wrong one.

This can get tricky, as I witnessed recently at a production of Romoe and Juliet. In this production, they placed musketeer boots on both Romeo and Mercutio.

This makes sense when you measure history in centuries, because the Three Musketeers were, like Shakespeare, from the “16-17th century” however, the problem is that when you really look into it, these styles missed Shakespeare all together.

During the reign of Queen Elizabeth, thigh high riding boots were worn by the upper class and later during the Jacobean period, gentlemen wore riding boots with spurs. That flare, bucket flap top and high heel you see on D’Artangan and the three Musketeers, however, didn’t happen until later.

So what kind of shoe Did Shakespeare wear?

Fashionable shoes for men and women were similar, with a flat one-piece sole and rounded toes. Shoes were fastened with ribbons, laces or simply slipped on. Shoes and boots became narrower, followed the contours of the foot, and covered more of the foot,

in some cases up to the ankle, than they had previously. As in the first half of the century, shoes were made from soft leather, velvet, or silk.

There were different styles throughout Europe and not all of them were popular in England. For example, in Hamlet, the prince of Denmark makes a reference to a style of shoe which was popular in Spain and Italy, but was largely scorned in England: The Chopine

The chopine was a platform shoe up to two feet high that allowed women to appear taller, more elegant, and to show off their wealth by needing more fabric for their gowns.

The English largely saw it as impractical but it was very popular in other European countries. You can see Shakespeare’s propensity to let the modern world of fashion creep into his plays, since even though the chopine itself does technically date back to the 15th century when Halmet is supposedly set, the word Chopine doesn’t seem to have existed in English until Shakespeare’s lifetime (1598 or 1611) and the style of shoe wans’t popular until well into the 16th century.

You can see in this portrait of Queen Elizabeth that even as a royal she wore a rather plain shoe. The material covers the foot and offers protection, and even seems to be embellished with decorations of high value, ,but is not elaborate in its’ design

Among men’s shoes, it was popular to slash the sides of the shoe to show the stocking color underneath. I have to think this is a precursor to the pre-ripped jeans we have today. It seems mutilation of fabric in the name of fashion is as old as fashion itself.

The shoes of this period were of various shapes and of many colours. They were frequently slashed below the instep in order to show the colour of the stocking. At parting, Ralph, in The Shoemaker’s Holiday (i. 1), gives Jane a pair of shoes “made up and pinked with letters of thy same.” Hamlet speaks of “provincial roses in my razed shoes.” “Provincial roses” refers to the habit of wearing roses, or rosettes, upon the instep. They were generally made of lace, and often decorated with gold thread, spangles, or even jewels. At times the roses were worn large — four or five inches in diameter. “Why, ’tis the devil; I know him by a great rose he wears on’s shoe to hide his cloven foot.” (Webster’s White Demi, v. 3.) Corks, so often referred to in the old plays, were shoes with cork soles that increased in thickness towards the heel, where they might be two or three inches thick. Their purpose was the same as high heels, and, when more fully developed, became known by another name. “Thy voice squeaks like a dry cork shoe.” (Marston’s Antonio and Mellida, Part I. v. 1.)

Shoe buckles were popular, which explains why pilgrims (the travellers of this 16-17th century era) we know of America have buckles on their shoes.

Men also were not able to dress themselves. They had to have assistance to get their attire on each day and were happy to wear the same clothes all day. It was an extreme undertaking to “make ready” or get dressed.

In one statue of Sir Walter Raleigh, the artist shoes him in thigh high boots, but then another painting of the same man shoes him in tights, not boots.

So apparently, much like today, what shoes you wore was determined by the day.

In 2009 the Museum of London had a shoe display of shoes found in London which they believe were actually worn on stage in Shakespearean plays.

The museum is putting a theatrical foot forward this week with a small case display of shoes worn by actors at the legendary Elizabethan playhouse, The Rose.

The centrepiece of the show is a shoe recovered from The Rose site itself on the Bankside of the Thames in the late 1980s. It is believed to have been worn during actual performances on the 16th century theatrical stage.

The remarkable find has enabled Museum of London archaeologists to piece together the hidden story of the playhouse. It goes on display at the same time as the definitive book on the theatres, The Rose and The Globe: Playhouses of Shakespeare’s Bankside, Southwark, is published.

COulnd’t find it online. Did find it at several libraries.

Here’s a shoe picture of a man wearing the rounded toe shoes.

That was most common. Slashes to show off stockings were earlier in the century, to be replaced later with ties.

Boots, (the thigh high ones) were for riding mostly, but among the uppermost classes they were worn fashionably as well.

Dive deep into the topic of Shakespearean footwear with these 5 Examples (including ones from the museum display mentioned in this week’s episode) as well as recommended articles where you can learn more.
All this information is compiled into one short guide which you can download here. 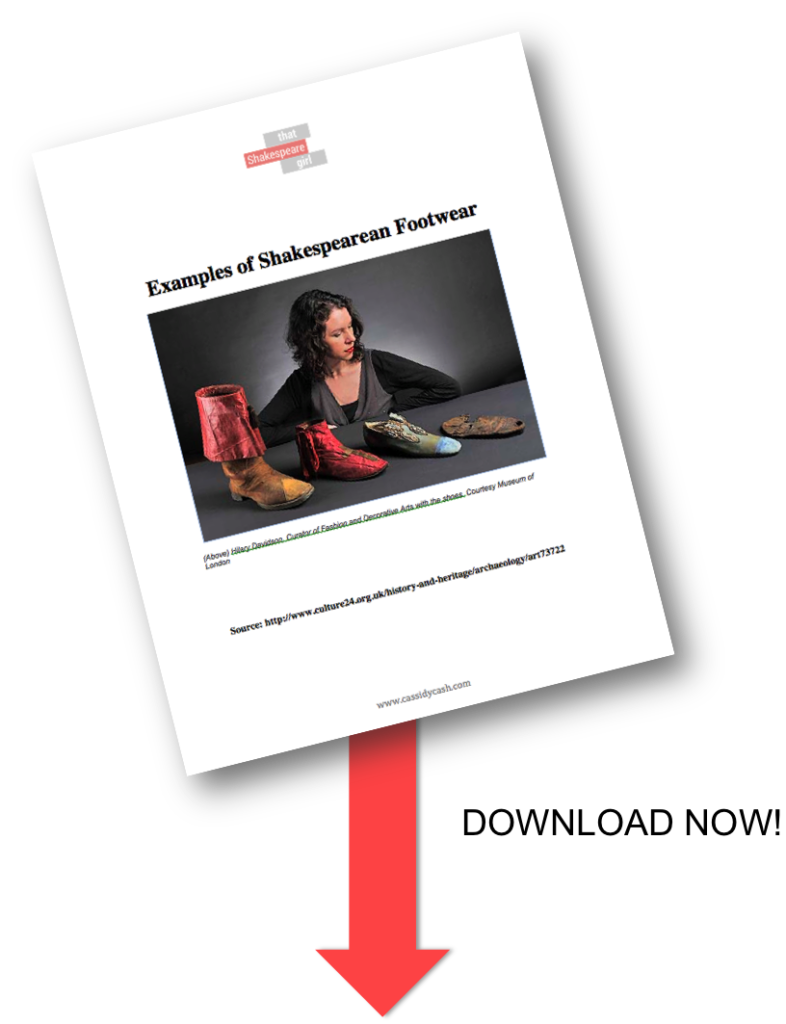