During the Essex Rebellion, Shakespeare’s popularity as a playwright saw his company turned into a weapon against the Queen, and William Shakespeare narrowly escaped being tried for treason.

The Earl of Essex’s stepfather, Robert Dudley (the Earl of Leicester and patron of Leicester’s Men, of which Shakespeare was a member) began his legendary mark on history as the Queen’s friend turned clandestine lover. Insomuch as the Virgin Queen entertained suitors, Dudley was the top guy in the running to make her rethink her stance on singlehood and get married. Dudley even proposed to Elizabeth one time over the Christmas holidays, at a festival held in her honor at Kenilworth Castle which some historians think an 11 year old William Shakespeare might have witnessed. 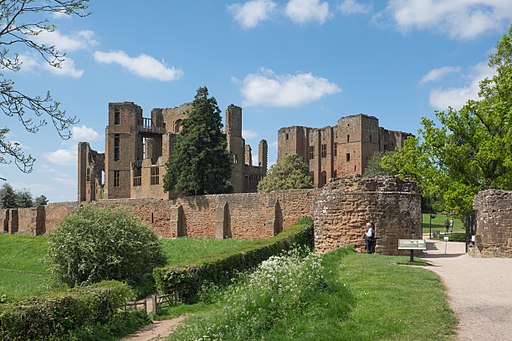 When Elizabeth became Queen at the age of 25, she immediately appointed Dudley to a position of prominence in her government, making him Master of Horse, a position which required regular attendance to the Queen. Their obvious intimacy made a scandalous rumor mill absolutely ablaze with commentary on the Queen’s relationship with Dudley and made her personally vulnerable to the attacks from people like the King of Spain who had numerous reasons to want to discredit her. Surviving one massive scandal where a man arrived at court claiming, with credible evidence, to be the illegitimate child of Dudley and Queen Elizabeth, their relationship would now find sound reason to distance themselves from one another when Dudley’s wife died under suspicious circumstances.

Amy Dudley died falling down a flight of stairs. Enemies of Dudley and the Queen claimed that either, or both, had plotted for Amy to die in order to allow the two to be together. Despite the fact that in reality, neither of them were likely to be involved in her death and investigations at the time concluded her death was accidental, the scandal was too large for the lovers to overcome. 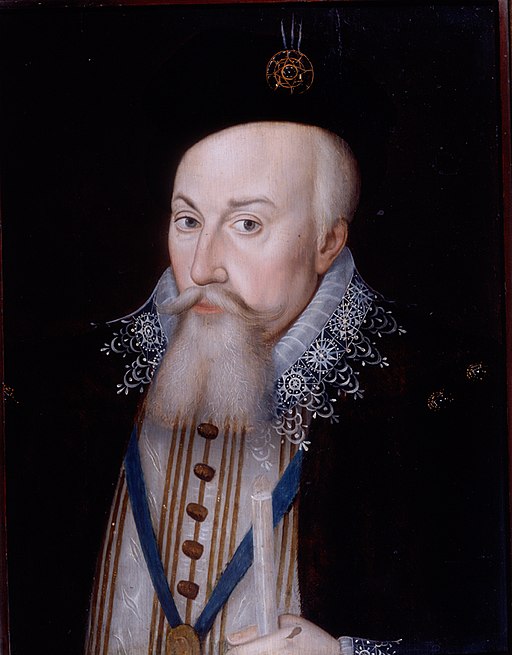 Elizabeth was obliged to step back from her relationship with Dudley in public, but in private they exchanged secret coded letters, met clandestinely in disguise, and she even is reported to have kept his portrait by her bedside. By 1575, Dudley had decided to try and persuade Elizabeth to marry him and he staged a giant proposal, which was truly a spectacular event for the entire county. She loved her visit there, and Dudley’s attentions, but she could not marry him. The scandal around Amy’s death, as well as the intense opposition from Dudley’s rivals could erupt into an all out civil war.

Whether he was motivated by her refusal, or he had simply ended up in an unavoidable situation after a rash love affair, Dudley would marry Elizabeth’s lady in waiting, Lettice Knollys, in 1578, just three years after his proposal to Elizabeth at Kenilworth Castle because Knollys was pregnant and insisted on a marriage. Elizabeth was furious, she attacked Lettice Knollys, and screamed at her, even banishing her from court. 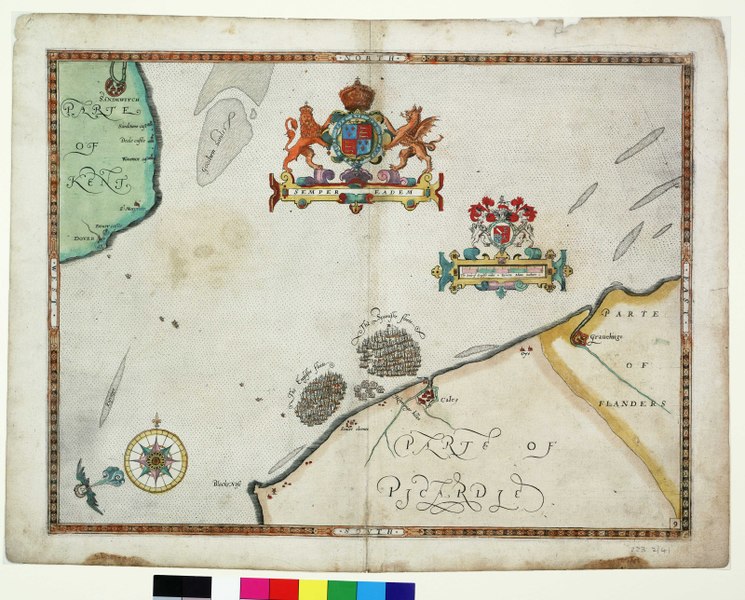 1590,  [The fireship attack on the Spanish Armada, 7 August 1588]Disbound sheet. Hand coloured engraving. Scale: circa 1:150,000 (bar). Ungraduated chart of the track of the Spanish Armada. The bar scale is in English miles. The chart contains the coats of arms of Queen Elizabeth and Lord Howard. The prevailing wind direction is indicated next to the compass rose. This is one of twelve sheets (title page, one overview chart and ten local charts) boxed with their original vellum binding. It has a sheet number, 9, in the lower right corner. PBD8529, Adams Expeditionis, Fireship attack Augustine Ryther; Robert Adams [Public domain], via Wikimedia Commons

Elizabeth would eventually forgive Dudley, and by 1587 as the English faced off against the Spanish Armada, it was Robert Dudley who was at the Queen’s side. By then, Dudley was terminally ill, but he gallantly accepted the position of “Lieutenant and Captain general of the Queen’s Armies and Companies”, and walked beside her horse when she gave her Tilbury Speech of 1588. One of the last reported sightings of Dudley and Queen together was the pair standing at a palace window watching a celebratory parade staged by Dudley’s stepson, Robert Devereaux, The Earl of Essex. 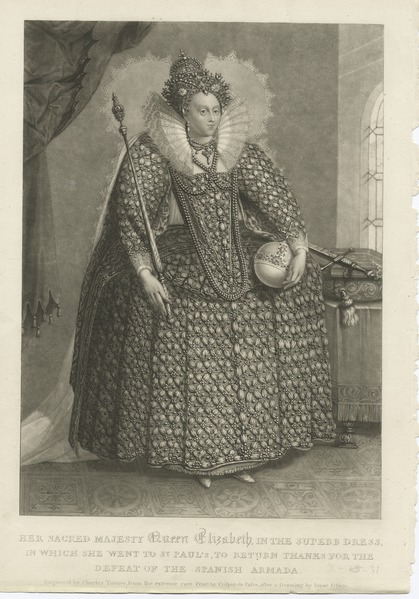 Her Sacred Majesty Queen Elizabeth, in the superb dress, in which she went to St. Paul’s to return thanks for the defeat of the Spanish Armada.Scan by NYPL [Public domain], via Wikimedia Commons

A few days later, on 4 September 1588, Robert Dudley died. Elizabeth was inconsolable. Their relationship had survived almost 50 years of trials and tribulations, and Elizabeth was lost without him. She inscribed the brief letter he had written to her as “His last letter” and kept it locked in a case beside her bed for the rest of her life. For years after his death if anyone mentioned his name, her eyes filled with tears. 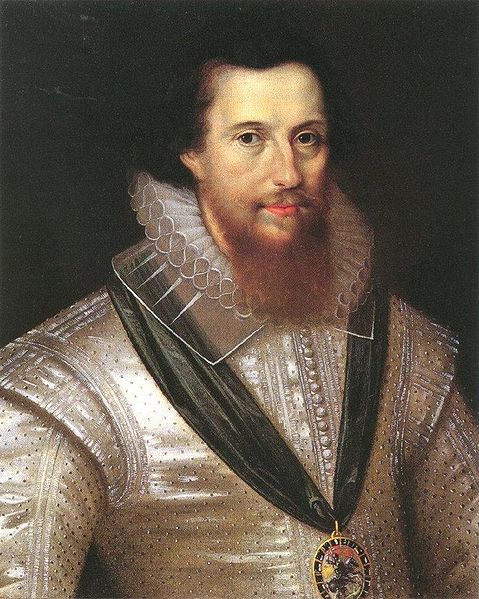 I believe it is her continued love of Dudley that allowed his stepson, the Earl of Essex to achieve such favor with the Queen. Denied her suitor and the one man she truly loved, the Queen likely felt a hole in her life which Essex seemed to fill both by his relationship to Dudley, as well the fact that whether intentional or not, his personality tried to mimic the late Robert Dudley, which she longed to have returned to her. While the reasons for Essex’s appeal to Elizabeth remains conjecture, it is verifiable that she enjoyed his self-confidence, and admired his strong nature, which allowed Essex to take particular liberty in her presence. It’s equally plausible that Essex was mimicking the role of Dudley on purpose to be subversive to the crown, but regardless of the reasons, there came a day when Essex took too many liberties and, acting on impulse, drew his sword on the Queen during an argument at court. This time, Essex had gone too far.

Essex entertained many grievances towards the Queen, and likely had usurping the government on his mind all along. However, after this ghastly display at court, he was appointed to the one position in all of England no one wanted to have: he was Lord Lieutenant of Ireland charged with bringing peace through war to the region. This appointment marked the beginning of what would become the famous Essex Rebellion of 1601.

As a patron of Shakespeare and a friend of Shakespeare’s other famous patron, Henry Wriothesley, The Earl of Southampton, Essex used the theater and Shakespeare in particular as a weapon in his quest against the government. 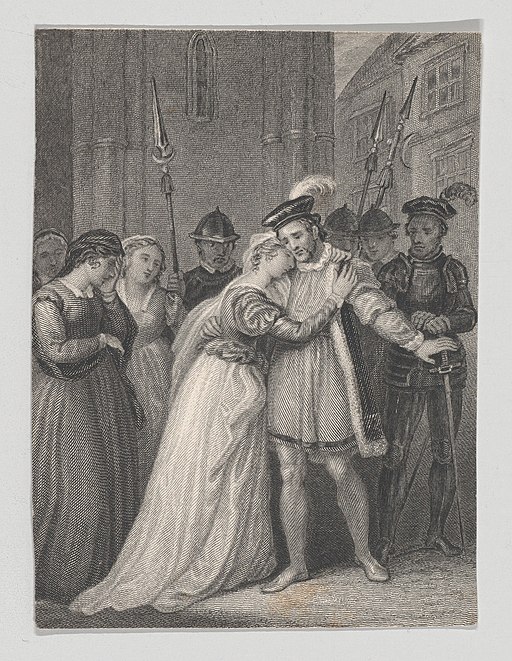 A popular play during Elizabeth’s reign and legend even holds she claimed to be the inspiration behind the title role, Shakespeare’s Richard II had been performed in London as a street play numerous times but all with one major exception: The abdication scene was always removed.

The play tells the story of the last two years of Richard II’s reign when he is deposed by Henry IV, imprisoned and murdered. The Parliament scene or ‘abdication scene which shows Richard II resigning his throne. Although historically accurate, it would have been dangerous for Shakespeare to stage that scene because of the parallels between Queen Elizabeth and Richard II. It might have been taken as an assault or treason to the crown. King Richard had relied heavily on politically powerful favourites, and so did Elizabeth; her advisors included Lord Burleigh and his son, Robert Cecil. Also, neither monarch had produced an heir to ensure the succession.

After his attempts at a truce in Ireland had failed, Essex returned to England against the Queen’s orders to try and explain himself. She was furious, stripped him of his offices, and placed him under house arrest. Now disgraced, and a failure, Essex decided to stage a rebellion. Rousing up close to 300 supporters, he prepared a coup. Saturday, February 7, 1601, the night before they were to launch the rebellion Essex paid Shakespeare’s company, The Lord Chamberlain’s Men, to perform Richard II, and include the abdication scene.

Clearly, it was Essex’s intention to send a message to the Queen. It seems as though Essex and his men intended for the very public display of an inflammatory play inside a popular playhouse, where political statements were often made and influenced from the stage, to stir Londoners in a powerful desire to replace the government. Confident the play would arouse support for their cause, the next day on February 8, the Earl, and his 300 supporters marched into London to discover the people did not rise up in support of the cause and the rebellion failed. Despite staging a public performance of an inflammatory play by the best known playing group in London, the rebellion did not gain the support it needed and fizzled before it began. After marching into London with his 300 men, Essex was captured, tried, and ultimately executed for treason in 1601. 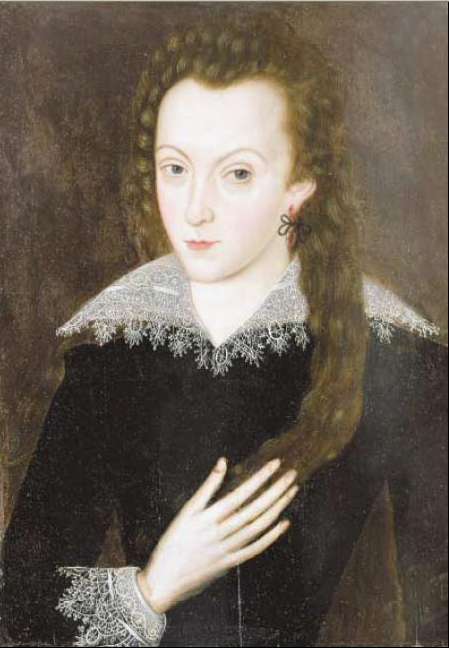 A fellow conspirator, and Shakespeare’s most well known patron, Henry Wriothesley, The Earl of Southampton, was tried at the same time as Essex. Wriothesley was spared his life, and sentenced to be imprisoned in the tower. After Elizabeth’s death two years later, James I would release Wriothesley from the tower whereupon Southampton would resume his place at court including his connection with the stage. In 1603 he entertained Queen Anne with a performance of Love’s Labour’s Lost by Richard Burbage and his company, to which Shakespeare belonged, at Southampton House.

Considering Southampton’s strong affection for the stage, and direct connection to Shakespeare in particular, it is hard to imagine how Shakespeare would have felt anything but entirely too close to the entire rebellious event. Henry Wriothesley was the patron to whom Shakespeare had dedicated his poems Venus and Adonis and The Rape of Lucrece.

Shakespeare must have felt compelled to defend himself against charges of treason because Augustine Phillips, the spokesman for the Lord Chamberlain’s Men, made a public statement just a few days after the February 7 performance, in which Phillips takes considerable pains to mention that that Shakespeare’s company was paid 40 shillings. He makes a further point that this amount was considerably more than the normal rate to stage a play. Philips goes on to declare that the choice of Richard II was not made by the company, but, as is customary, was made by the patron paying for the performance. The public statement from The Lord Chamberlain’s Men was a strategic distancing of themselves from the rebellion to prevent Shakespeare and his company from being brought up on charges of treason.

Either the Queen’s anger at Essex eclipsed her notice of the playing company, or their public statement worked, but The Lord Chamberlain’s Men were never accused of treason.

Despite the dissemination of the rebellion itself, and the narrow escape from treason by Shakespeare’s company, the Earl of Essex did not escape the dire consequences of his treachery. On 25th February 1601, Essex was beheaded for treason.

Declaring her control over the government, characteristically asserting her power to dissuade further rebellion, and sending a clear response to Essex’s theatrical message, The Queen commanded Shakespeare’s Lord Chamberlain’s Men to perform Richard II for the Queen on Shrove Tuesday, in 1601, the day before Essex’s execution. I found no confirmation of whether her staging also included the abdication scene.

Sources for this article in case you need them:

Shakespeare and the Rebellion by Claire Asquith

The Encyclopaedia Britannica: A Dictionary of Arts, Sciences …, Volume 25 (1911)