Did Shakespeare Go Trick or Treating? 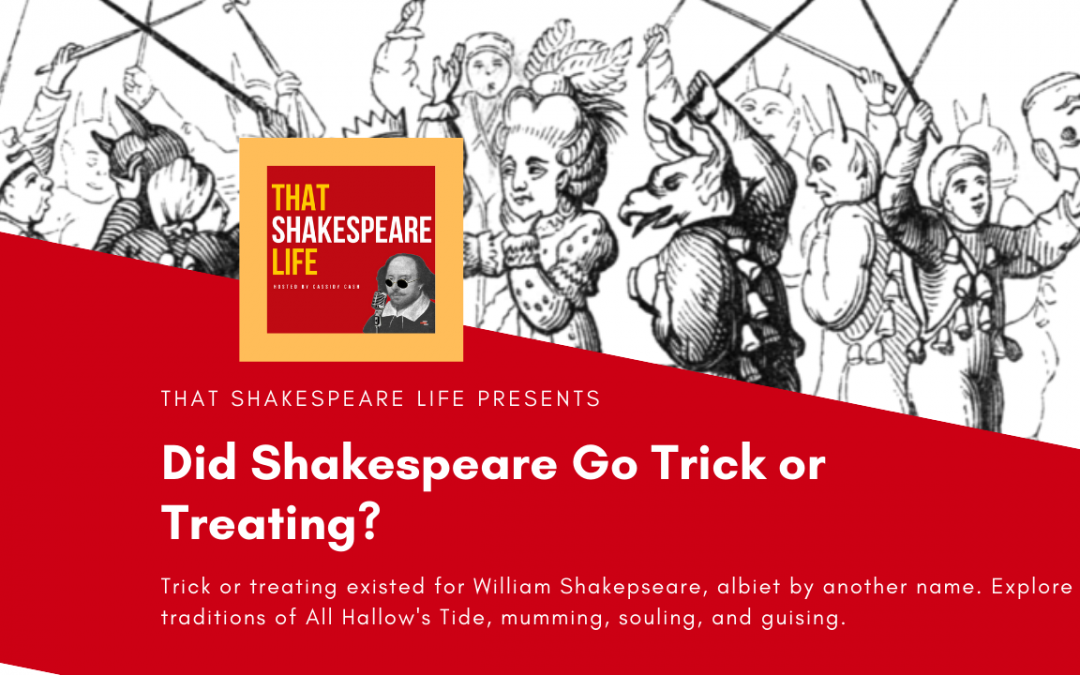 When it comes to the tradition of trick or treating on October 31, we can trace the origins of this practice back to Tudor England. Some say it was even under Queen Mary that the phrase “All Hallow’s Eve” was reportedly first used. The practice of trick or treating was often called “guising” “mumming” or “Souling”, and it is this last term which we see come up in Shakespeare’s Two Gentlemen of Verona when Speed accuses his master of “puling [whimpering or whining] like a beggar at Hallowmas”. Hallowmas along with mummers shows up in at least four additional plays of William Shakespeare, which leads us to ask this week:

Did Shakespeare Go Trick or Treating?

The tradition of going house to house to ask for treats, and potentially performing a trick on the dweller in the absence of said treat, dates back to the 15th century. While the term “trick or treating” doesn’t come into the English language until 1927, the practice was well known for Shakespeare’s lifetime and generally called “mumming” “guising” or “souling.”

At least as far back as hundred years before Shakespeare, in the 15th century, among Christians, customs existed for sharing “soul cakes” to mark Allhallowtide. This holiday spanned three days and was celebrated across October 31 through November 2. The holiday was held as a feast day to honor the dead, pray for their souls, and in return for the prayers families of the departed offered soul cakes. Over the course of these three days, people would visit house to house asking for soul cakes, and offering to pray for the dead, or presenting themselves as representatives of the dead. There was a belief that the more people prayed for your dead loved ones, the more likely it was they would have a comfortable afterlife.

This asking for soul cakes evolved later into people travelling from town to town singing under windows to get soul cakes, There were several songs used for this, one popular one said “'Soul, souls, for a soul-cake; Pray you good mistress, a soul-cake!'” (Written by Mary Dodge for St. Nicholas Magazine in 1883. Pg. 93. Source) 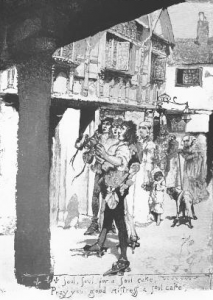 Image is titled “Souling on Halloween” and is found in a 19th century publication of a children's magazine called “St. Nicholas”. Source details: The Christian practice of souling on All Hallows' Eve, also known as Halloween, in an English town. The photograph is taken from “St. Nicholas: An Illustrated Magazine for Young Folks”, December 1882, p. 93 The magazine states that the rich gave soul cakes to the poor on Halloween; in return the recipients prayed for the souls of the givers and their friends. It further says that ‘this custom became so favored in popular esteem that, for a long time, it was a regular observance in the country towns of England for small companies to go about from parish to parish at Halloween, begging soul-cakes by singing under the windows some such verse as this: “Soul, soul, for a soul-cake: Pray you, good mistress, a soul-cake!”‘ This verse is inscribed on the bottom of this photograph. As the text notes, this practice was also performed on Christmas.” Image Source

The purpose of the songs were to ask for “mercy on all Christian souls for a soul-cake.” It was known as ‘Souling' and was recorded across Britain, as well as in Germany and Austria. Shakespeare references souling in his play, Two Gentlemen of Verona, in Act II Scene 1, when Speed says “ to speak puling, like a beggar at Hallowmas.”

Shakespeare mentions “Hallowmas” in three other plays, Richard II, Measure for Measure, and merry Wives of Windsor, and references “mumming” in  Coriolanus. He mentions Hallowmas more than Christmas, which isn’t conclusive of anything, but could suggest Hallowmas was a significant holiday for Shakespeare’s lifetime.

The idea of dressing up in costumes for All Hallow’s Eve or Hallowmas took place during Shakespeare’s lifetime as one way to celebrate All Soul’s Day. Celebration of All Souls' Day in England included bonfires and disguises, and some people would even perform tricks in return for treats. This practice was called mumming, and is considered by many scholars to be one origin for trick or treating we have today.

The children of Ireland and Scotland participated in their own version of souling called “guising,” in which they dressed up in costume and went door to door asking for food or treats. One distinction of “guisers” from souling, was that instead of offering prayers, guisers often put on a show to receive their goodies. This show was usually a form of performance art, including plays, juggling, dancing, singing, or reciting poems. (Source)

My friends at TudorsDynasty, wrote an article on the Tudor foundations for Halloween, and in that credit the 16th century with giving us the term “halloween.”

Author Nancy Bilyeau wrote an article on October 27, 2011 for the website English Historical Fiction Authors website and said the following (no source listed):

The first recorded use of the word “Halloween” was in mid-16th century England. It is a shortened version of “All-Hallows-Even” (“evening”), the night before All Hallows Day, another name for the Christian feast that honors saints on the first of November. – Nancy Bilyeau, The Truth about Halloween and Tudor England | Source

“By the 1550s, the Scottish form of the holiday occurring on October 31 appeared as Allhallow-even. Over time, Scottish speakers dropped the initial all and contracted the final even to e’en, resulting in the more contemporary Hallow-e’en.” (qtd The Parenting Patch, who cited Merriam Webster)

Now the original question this week was whether Shakespeare would have gone trick or treating, and I think it is a safe bet to say yes. The history is mixed about whether the tradition was for adults or children, and the age of those primarily participating in mumming, or souling, seems to have evolved throughout Shakespeare’s lifetime, but as the tradition was strong 100 years before his birth, and continued in England well after his death, I believe it is very likely that Shakespeare either in his childhood, or as an adult, would have participated in going door to door in costume asking for treats.

If you would like to try your hand this halloween at making your own batch of soul cakes, be sure to download this recipe, where I have adapted a recipe from the 16th century that you can make at home to mark All Hallow’s Eve the Shakespearean way this year. I adapted the recipe I to be allergy friendly, from a recipe provided by our friends at the Anne Bolyen Files. 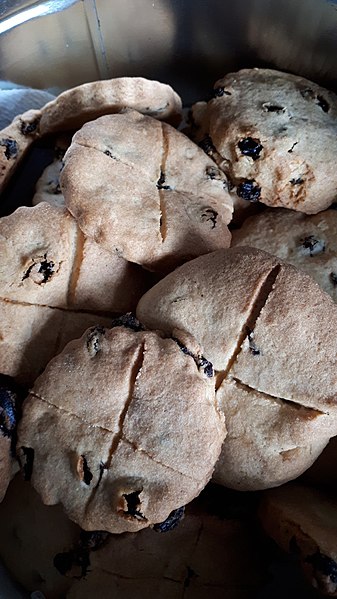 That’s it for this week. Thank you for being here! I’m Cassidy Cash and I hope you learned something new about the bard. I’ll see you next week!