Waffles and Waffle Irons of the 16-17th Century 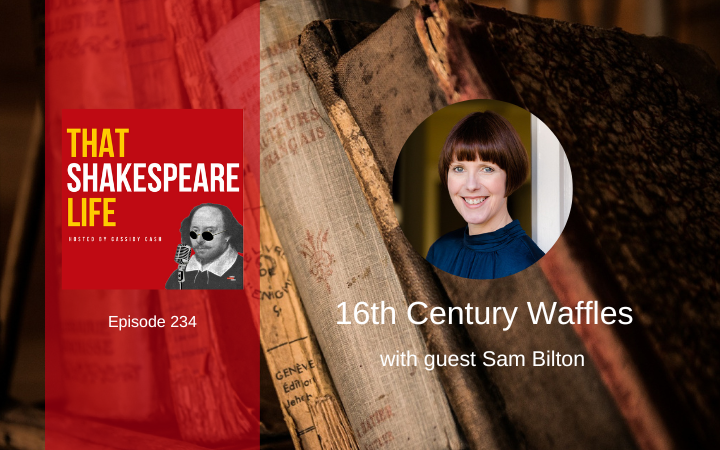 In William Shakespeare’s Henry V Part II, Scene 3, Pistol uses the phrase “men’s faiths are wafer-cakes.” Wafer cakes were thin baked breads that would eventually become what we know today as waffles. During the Renaissance and Middle Ages, specialty iron tongs were used to bake wafers that were served as a final blessing after the Eucharist in churches. The art of making waffles was so popular in the Netherlands that when the Pilgrims, who had spent some time in Holland, set sail for North America in 1621, it is believed that some of the Dutch who went with them took these wafer cakes on board. While waffles may not have been a staple breakfast food for Shakespeare’s lifetime, it turns out the bard not only had waffles but they came in a surprising variety of shapes and recipes. Here today to share with us the Shakespearean history of wafer cakes and waffles is our guest and expert food historian, Sam Bilton.

Food historian, writer and cook Sam Bilton has been intrigued by spices most of her life. Her first book on the history of gingerbread won a World Gourmand Cookbook award in 2021 and she is a frequent contributor to national magazines, food festivals, television and radio. Fool’s Gold: A History of British Saffron is Sam’s second book was released in September 2022.  For further information visit sambilton.com  or follow Sam on instagram @mrssbilton.

I’ll be asking Sam Bilton about:

Cooking & Dining in Tudor and Stuart England by Peter Brears (Prospect Books, 2015) – indispensable for studying the food of Shakespeare’s time!

The Oxford Companion to Sugar and Sweets (edited by Darra Goldstein) is a great a place to begin researching sweet treats such as waffles.

The Biscuit by Lizzie Collingham (Bodley Head, 2020) – a really enjoyable read particularly if you have a fondness for historical biscuits! It also includes a section on waffles and wafers.

Waffles were a luxury food item

We may think of these delightful clouds of baked wheat as a staple breakfast food here in the United States, but for Shakespeare, they were anything but ordinary. Paintings and portrait from the period demonstrate that while people would have eaten waffles at major celebrations, like for a city celebration of Lent, they were not regular foods they enjoyed at home. As Sam points out this week, wafer cakes were considered an appropriate item for banquets, which were highly exclusive dinner parties held only for the elite of the elite.

It would have been the height of indulgence to eat wafers for breakfast during Shakespeare’s time. Waffles would have been served as part of a banquet. Not a large feast, but a course that was served at the end of a meal. The purpose was to serve food that would help with digestion. It was a huge luxury, not everyone go to go to the banquet at the end of a meal, only a select few got to attend. They were served in separate rooms and entire buildings built purposely for banquets and the foods served there were very sweet and highly spiced and very expensive.

You can see in these notes by Gervais Markham (pictured below), evidence of wafer cakes being considered luxury items. The recipes call for the best of ingredients and wafers have a specific place in the order of serving a banquet.

I found a cast iron waffle iron (non-electric) on Amazon that is made of cast iron, hinges at the middle, and is very similar to the wafer irons from Shakespeare’s lifetime. Check that out there.

Waffles were made with wafer irons

In the 16-17th century, the terms you will see appearing in recipe and cookery manuals for waffles is “Wafer cakes.” Similarly, the apparatus used to create the wafer cake designs were known as wafer irons. They were highly ornate pieces of metal, even sometimes featuring heraldry or family specific designs, but one of the most popular shapes to develop as popular during Shakespeare’s lifetime is one of the same waffle shapes we enjoy today:

[Wafer cakes] used to be embossed and the hexagonal shape developed as the popular shape (same as today). You can get some wonderful wafer irons with elaborate designs.

Noble Families would have had a Wafery dedicated to making waffles

Waffles were made for highly elite families, and in some instances there was even a wafery dedicated exclusively to the making of waffles. You can see one of these Waferies in the portrait below.

Big noble households would have had a wafery, where there were assigned people to make the wafers for the house. There were recipes that exists, and one is from Hiugh Plat, Delights for Ladies, and it was published around 1600. He has one for waffles In the book “The Ladies Companion” there’s also another recipe for waffles. They were wealthy ladies, not talking about people geared towards servants, but rather “the lady of the house” even though she wouldn’t have been the one making them herself. Intriguing they would appear in the book for a lady, but perhaps she was going to then instruct her workers to make them.

Waffles began as a part of the Eucharist

Waffles had their start as a specific wafer used in the Lord’s Supper, or Eucharist, in Protestant church services. They were extremely thin, unleavened pieces of bread, used for the body of Christ. Sam explains,

It’s thought that the communion wafers emerged out of the Jewish ritual of eating unleavened bread during passover. They were called oblata meaning ‘that which is offered’ or obley in English and were made by religious institutions and priests from at least the ninth century and were adorned with simple Christian symbols such as a cross. These wafers were also distributed to the poor and infirm on the Thursday before Easter. By the thirteenth century wafers were being made for non ecclesiastical purposes and there was a guild of oblayeurs established in Paris in 1270. Monks in Germany would eventually use the circular wafers as the base of lebkuchen, a type of gingerbread. The original oblata were a far simpler affair from the wafers served at the banquets of the Tudor and Stuart eras which by that time had been enriched with egg yolks, sugar and spices.