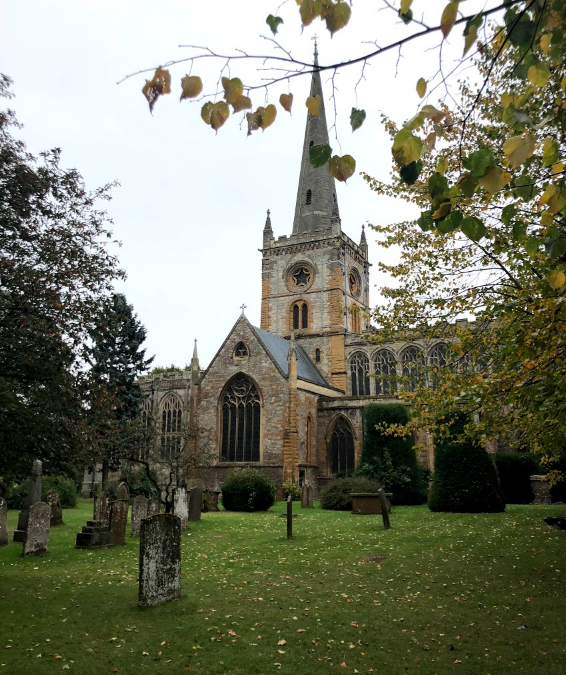 As you will know very well if you are an American, religion in England was determined by the reigning monarch. Whatever the King believed, the people were required to believe, worship,and practice as well, often on pain of fines, imprisonment, or even death.

The country went back and forth between catholicism and protestantism for many years until with the rise of Elizabeth I to the throne of England in 1558, the country became firmly Protestant.

Which meant that by the time William Shakespeare was born just a few years later, in 1564, the Shakespeare family, too, were Protestant. Which leads us to this week’s question:

DId Shakespeare go to church?

William Shakespeare was born, grew up in,and returned after his career in London to Stratford Upon Avon England.

His parents when he was a child,and himself along with his wife and children attended, worshipped, were baptized, and buried at a small church there called Holy Trinity Church.

As Shakespeare was growing up there, and as it continues today, Holy Trinity Church is a Protestant Church but it was not always. In the 12th century when it was built, Holy Trinity was originally a Saxon monastery. Over the years, the building adapted to the changing religions to which it played home, and inside the building you can see a variety of religious, secular, and even mythical artwork depicted within its walls. 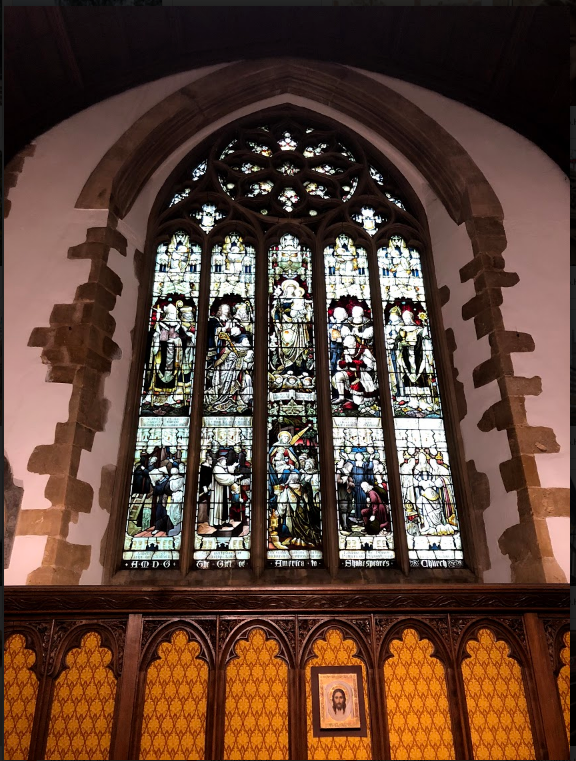 The stained glass window that was a gift to “Shakespeare’s Church” from America, installed in 1896. Photograph by Cassidy Cash, September 2018. All Rights Reserved.

I was there, in Stratford Upon Avon, for my very first visit to Holy Trinity Church in 2018, It was a Sunday and church services were going on,while a steady stream of tourists came through as well. So when you see this clip, I am speaking low on purpose as I was wanting to share the grounds with you but not be too disruptive to the surroundings.

Since then I was able to discover that both Judith and Hamnet are buried within the grounds of Holy Trinity Church but the precise records of where they are has been lost. It is still surprising to me that they are only “somewhere in the grounds” instead of upfront with their parents and Susannah Shakespeare, which are all three buried right up front inside the church in a conspicuous place of prominence, making the absence of Judith and Hamnet quite striking. There’s a story to be told there, but that will have to be for another episode.

Inside the church is quite beautiful. 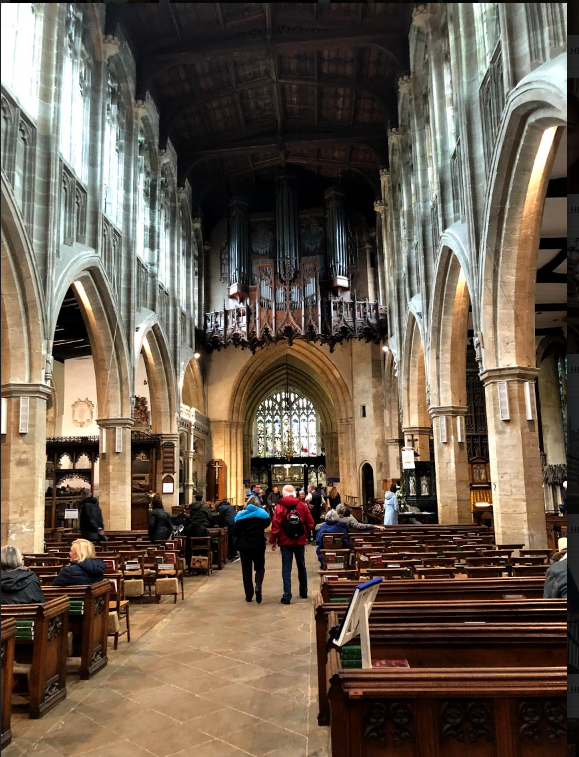 The interior of Holy Trinity Church, after you turn left passed the entrace, this is the aisle/hallway thatleads to where Shakespeare is buried. Photograph taken by Cassidy Cash, September 2018. All rights reserved.

Right when you walk through the main doors, there’s a gift shop on your right. If you keep going you step into this high vaulted ceiling room with many many doors and pews but they are oriented perpendicular to the door which was different than most church I had ever been in previously.

They do have a long aisle, but it does not lead to the pulpit.Instead, the aisle leads back into gated hallway,off which there are two rooms, one where Shakespeare’s grave is buried,and another where there is a large stained glass window given to the church by the United States of America in 1896.

Learn something new about William Shakespeare and his life in turn of the 16th century England with a history activity kit. Each kit includes a full set of step by step instructions, supply list, video tutorial, bonus artwork, and history guide to show you where that topic appears in Shakespeare's plays and research information into the Elizabethan history related to it. Choose your favorite topic to cook, create, and play your way through the life of William Shakespeare. 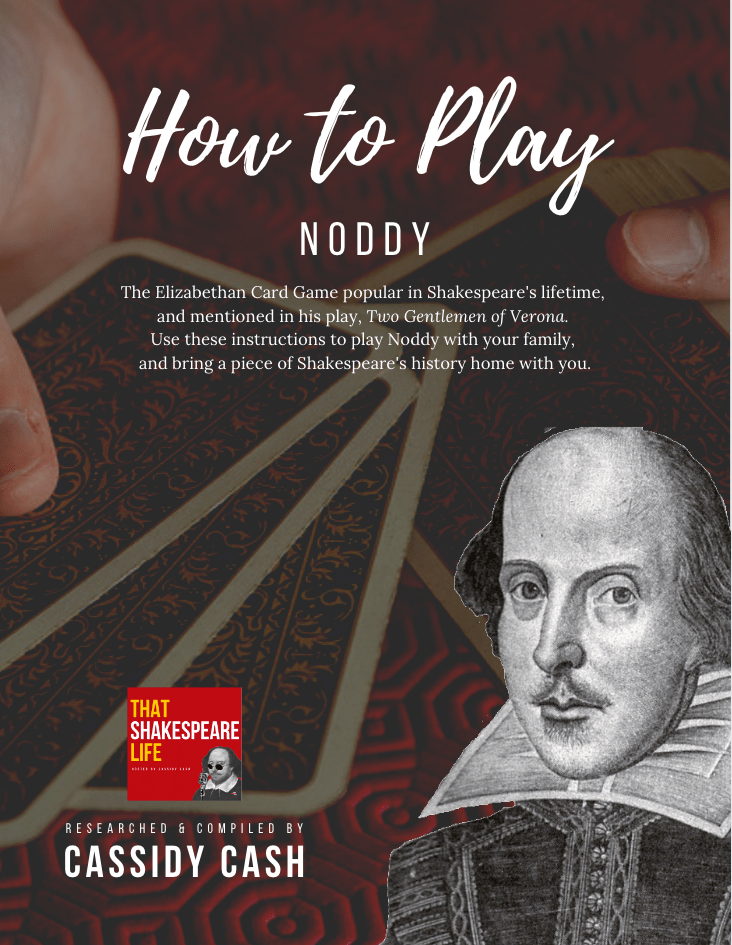 How to Play Noddy 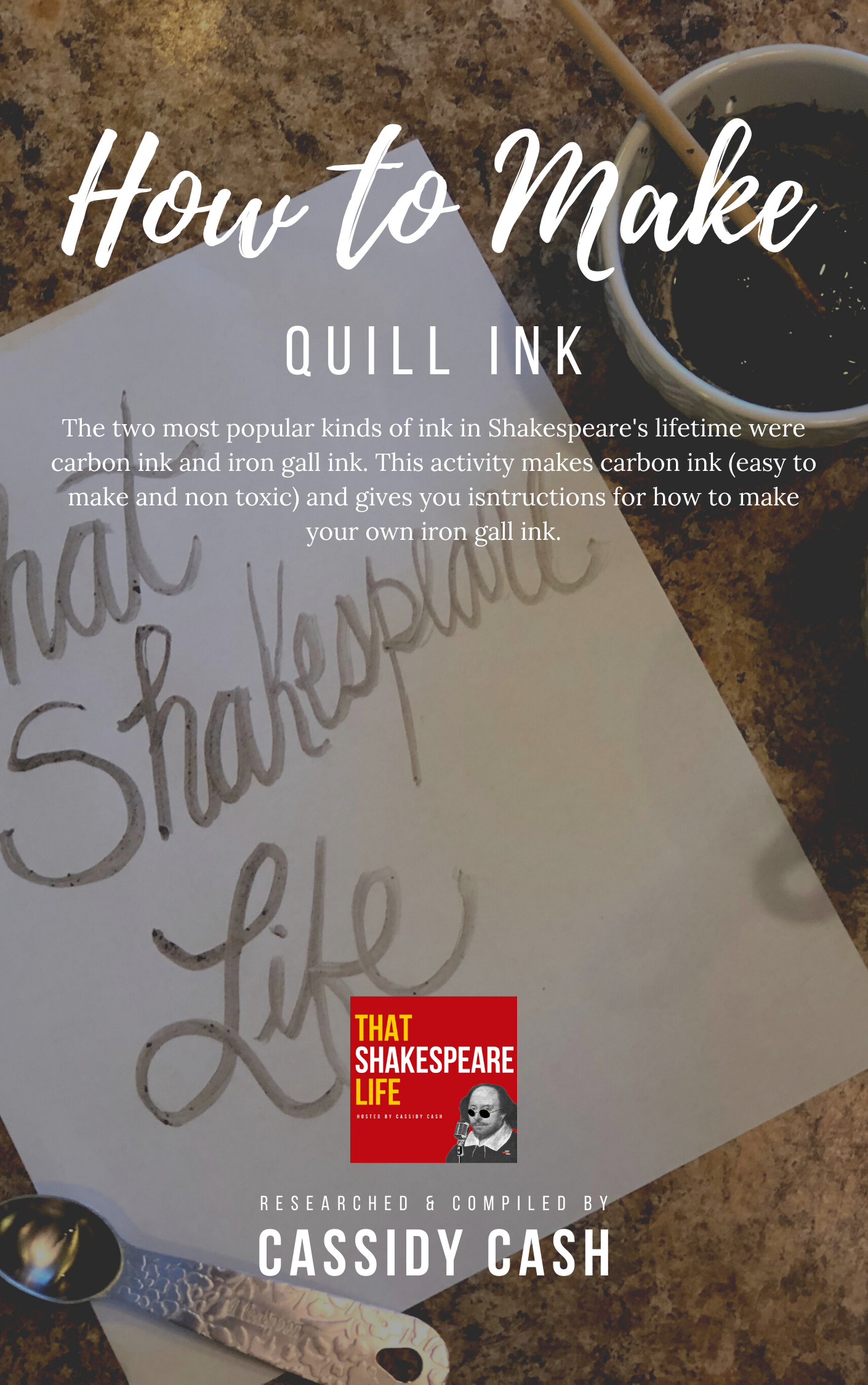 Make Your Own Quill Ink

Antony and Cleopatra (and others!) 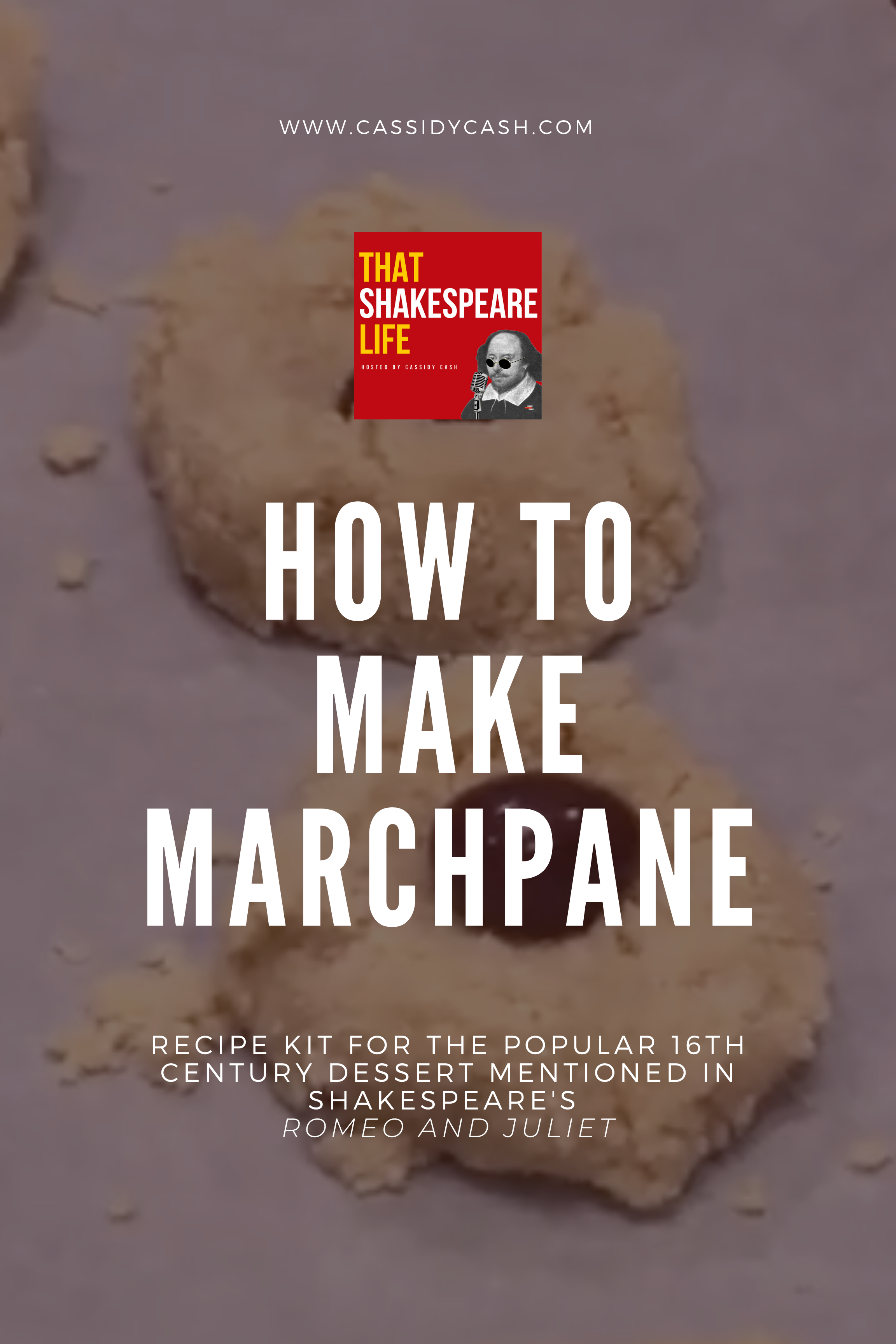 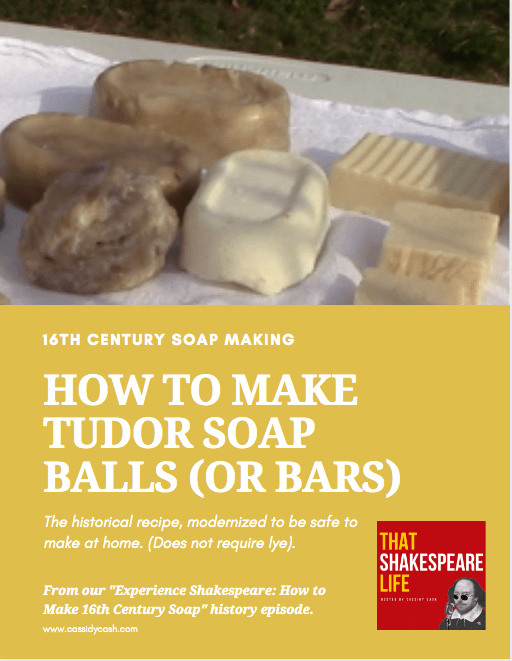 How to Make Tudor Soap

Just at this moment I am having trouble remembering if there was a third room or not, btu I do remember getting lost back there and being unsure how to get back out.I’m sure I looked every bit the tourist.

Nevertheless, once you do get back to the place where Shakespeare is buried, there’s no fanfare or anything you just walk right up and there he is. The grave looks exactly as you have seen in pictures,and along side of him are the graves of his family.Hiswife, Anne Shakespeare, their daughter Susannah, and her husband, John Hall. 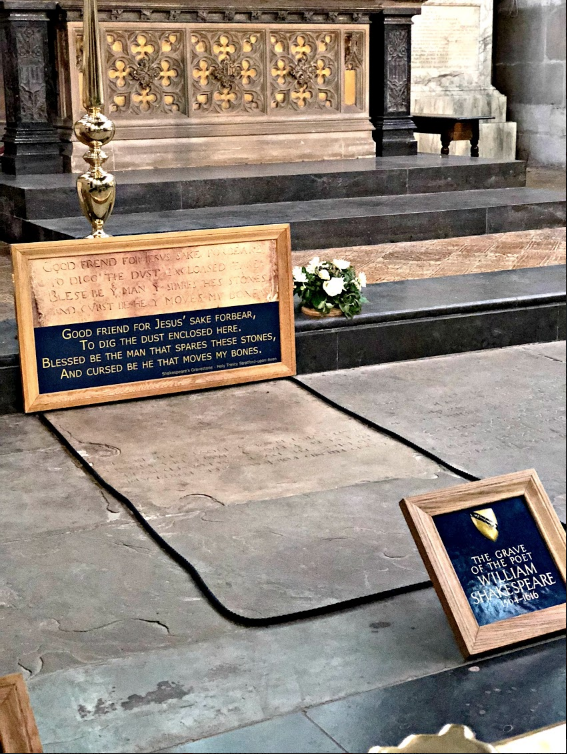 The church is also home to the baptismal records for WIlliam shakespeare nad his children, though today I believe the originals are in a museum whilst the church keeps copies.

It was pretty incredible to visit and to talk around the grounds. The church is located right on the River Avon–in fact, we were not setting out to find Holy Trinity when we happened upon it that day in Stratford Upon Avon. My travelling companion and I were actually following the river and stopped in the middle of the street to discover where we were. Delighted, of course, we spent the rest of the afternoon there. 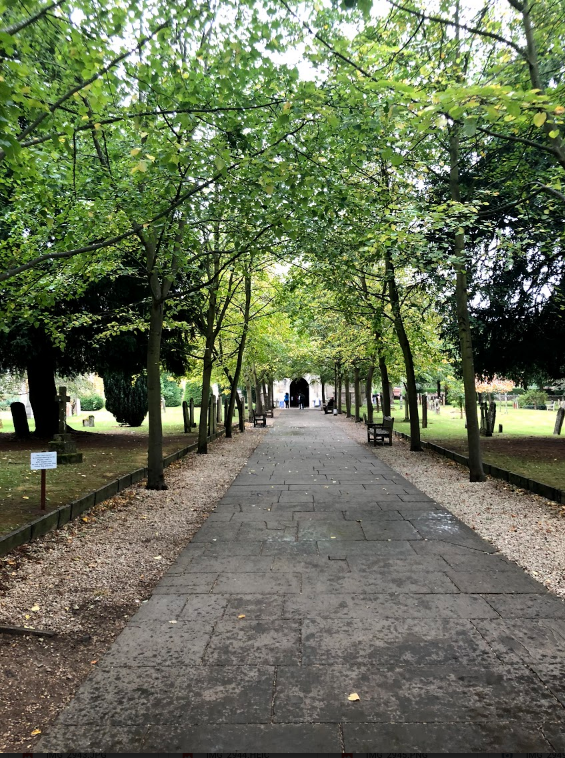 The tree lined walk leading up to the entrance of Holy Trinity Church.
Photograph by Cassidy Cash, September 2018. All rights reserved.

The history of the establishment is quite fascinating, and almost every piece has a story to tell. Lindsay MacDonald wrote a wonderful history piece on the church that’s posted on their website.I will link you to it below this video. Annually the church celebrates Shakespeare’s birthday, only this year they weren’t allowed to invite visitors due to Covid, so instead, they celebrated online with some digitalpdfs posted to their page telling abotu the church. I only just now found them, but they are delightful anf informative. Here’s a few things she said:

The principal path from the Old Town gate to the North Porth is lined with lime trees, twelve on the left (river side) representing the twelve tribes of Israel and twelve on the right representing the twelve apostles. One of the trees on the right is set back to represent the casting out of Judas. There is a constant precipitation of fine twigs from the trees onto the paths and lawns…Shakespeare’s cousin, Thomas Greene, and his family lived with Anne Shakespeare in New Place until 1611 when Shakespeare returned from London to live full-time in Stratford. Greene then moved to St. Mary’s House, by the entrance to the churchyard. Source 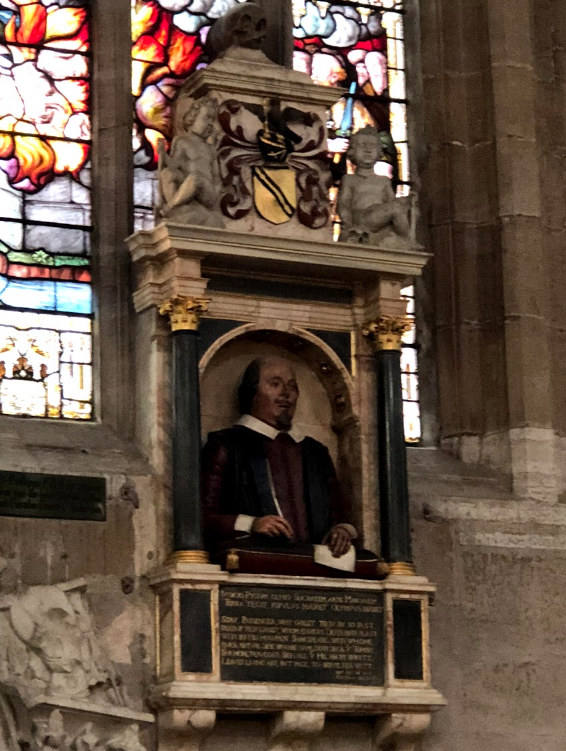 Monument to William Shakespeare, installed by his family (believed to be Susannah Shakespeare who commissioned this statue) Having been vandalized overthe years, we aren’t certain what Shakespeare ought to be holding in his hand there but, as you can see, as of 2018, he was holding a quill pen. Photograph by Cassidy Cash, September 2018. All Rights Reserved.

One thing I found really interesting was Lindsay’s description of the yew trees that are noticeably in larger congregation within the church yard than other places, but there’s a historical basis for the use of yews in a cemetery. Lindsay explains that yew trees were thought to cleanse a graveyard, so superstitiously, as well as ceremonially, they were appropriate to the space.However, with the arrival of the longbow to the English military, they started planting yew trees specifically to have the wood available for the creation of bows. Unfortunately, the yews were poisonous to cattle (a major industry at the time), so instead of planting them anywhere–they planted them in churchyards so the yews were accessible, but away from the cows.

So both for the ceremony of it, as well as the historical precedent, yews are a prominent feature at the church.

Lindsay’s article goes through several key aspects of the church itself,including teh chancel and the story of the baptismal font in which Shakespeare was baptised. It still exists, though it was damaged during the English Civil War. I will link you to Lindsay’s article where you can read about the details of the church like the baptismal and the 15th c door knocker, in the show notes below this video.

So the answer to this week’s question is yes, he did go to Church, Shakespeare was Protestant (though many people quite regularly debate the sincerity of his position on that given the fluctuating nature of England’s National Religion throughout the 16th century. But nevertheless, we do know he was baptized at Holy Trinity, married at Holy Trinity, worshipped there, and baptized his children there, and was buried there. So whether or not you want to question the motives of a man’s heart concerning religion, we can tell from his actions that William Shakespeare felt very strongly about Stratford Upon Avon and his home church of Holy Trinity Church.

That’s it for this week! I’m Cassidy Cash and I hope you learn something new about the bard. I’ll see you next week!