Did Shakespeare Know about Centaurs? 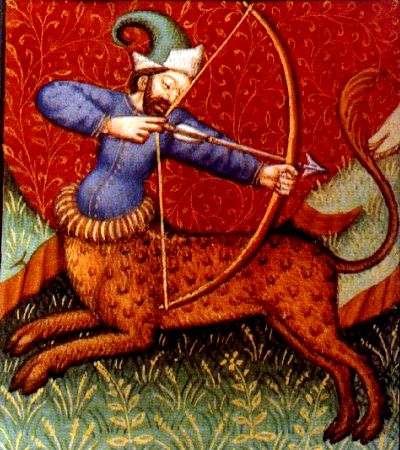 In the Middle Ages, beastiaries became popular as books of illustrations that collected diagrams nad explanations of all the animals in the world. Each illustration was paired up with a moral lesson, stemming from the idea that the world was the Word of God and every living thing has a meaning assigned to it. There were a few flaws to this approach, however, firstly because their naturalism was faulty, but second because there was no reqiurement that the animals be real, and the books themselves made no attempt to divide fake animals or mythological creatures from the real ones. Consequently, you ended up with a book of animals, and a vague and often divided opinion on exactly to what degree people like William Shakespeare would have thought the mythological creatures were real.

This week, we kicking off our mini-history course on Shakespeare and Mythological Animals in which we are going to spend every Saturday in July exploring the lore, history, and meanings associated with mythological creatures, and where they show up in Shakespeare’s plays.

We are starting this week by asking “Did Shakespeare know about Centaurs?”

If you like Shakespeare history behind the plays, consider subscribing as we have new videos there every Saturday.

William Shakespeare mentions centaurs most notably in his play, The Tempest, with the character of Caliban who is himself a centaur, but references to centuars, saggitarius, and half human/half animal monsters also show up directly or indirectly in Shakespeare’s King Lear, A Midsummer Night’s Dream, Troilus and Cressida, Othello, and The Comedy of Errors.

To learn more about exactly what Elizabethans like Shakepseare knew, and thought about, characters like Caliban when he appeared on stage as a half man, half horse, we have to look at the history of animals, mythology, and astrology, as it relates to Shakespeare.

Go bear it to the Centaur, where we host,
And stay there, Dromio, till I come to thee.

Comedy of Errors, I.2 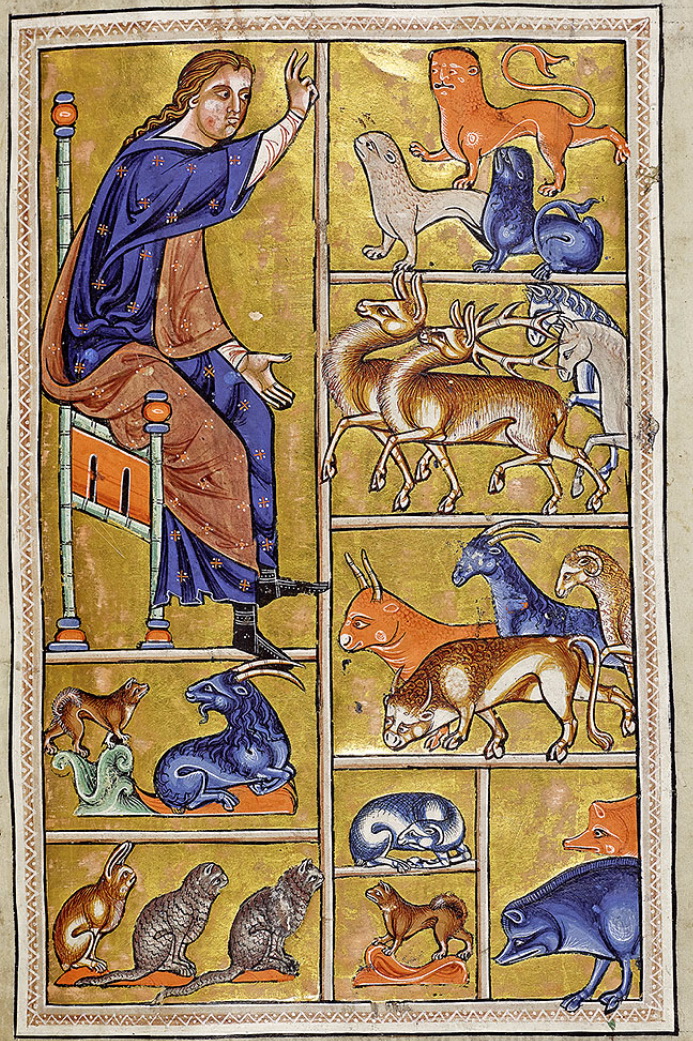 The natural history of 16-17th century England is a mixed bag of accurate science and some legends and myths that wormed their way into the conversation (500 years from now, they’ll probably say the same thing about our current science)

As an example, the pelican was believed to tear open it’s breast to give life to it’s young, and as such as thought to be the living example of Jesus in the animal world, tying to the story of Jesus whose blood saves sinners from damnation, thus Jesus is the life giver through his blood, which mirrored what the ancient world believed about the pelican.

Medieval Beastiaries were commonly moral tales like this, used primarily in the Chritian tradition to share the Western Christian beliefs through symbolism.

The earliest bestiary in this illustrated book format was the 2nd-century Greek bestiary called Physiologus. It was a collection of other bestiaries written about animals by people like Aristotle, Herodotus, Solinus, and other ancient classical writers. Aristotle wrote Historia Animalium and he, along with several others, was an early Greek naturalist.

Saint Isidore of Seville and Saint Ambrose would come along later and basically annotate the bestiary with references to passages from the Bible and the Septuagint. Their purposes were focused mostly on the moral and religious tales rather than animals facts or the natural world, but their accounts of the beasts were widely read among an audience who largely believed them to be true. Nevertheless, the often fanciful accounts of these beasts were widely read and generally believed to be true. Bestiaries were particularly popular in England and France around the 12th century, with the Aberdeen Bestiary being among the largest and most well known.

‘The battle with the Centaurs, to be sung
By an Athenian eunuch to the harp.’ 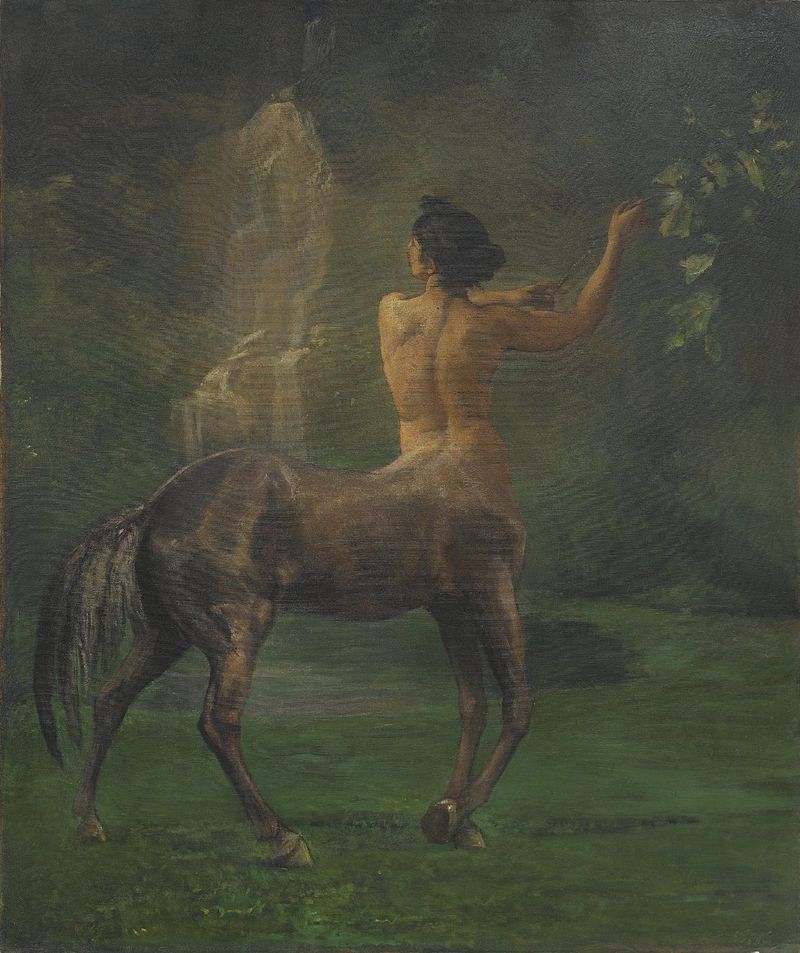 The Imaginary The Same as The Real

The Queen Mary Psalter is contains notes in the margins and decorations that are more extensive and coherent than similar works. Many of the animal images are placed next to the Psalms that they are intended to illustrate.

The Italian artist Leonardo da Vinci also made his own bestiary

Bestiaries were organized in different ways based upon the text. The descriptions could be organized by animal groupings, such as terrestrial and marine creatures, or presented in an alphabetical manner. However, the texts gave no distinction between existing and imaginary animals. Descriptions of creatures such as dragons, unicorns, basilisk, griffin and caladrius were common in such works and found intermingled amongst accounts of bears, boars, deer, lions, and elephants.

This lack of separation has often been associated with the assumption that people during this time believed in what the modern period classifies as nonexistent or “imaginary creatures”. However, this assumption is currently under debate, with various explanations being offered.

People seem to disagree as to the degree with which Elizabethans would have considered these creatures to be real vs imaginary. 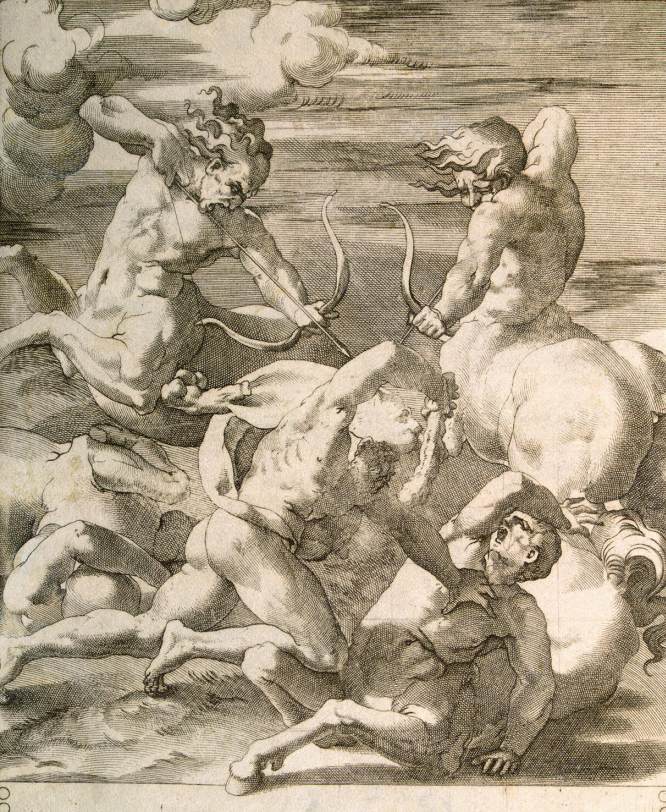 Down from the waist they are Centaurs,
Though women all above.

The centaur was specifically a very dangerous and scary animal, prone to violence, anger, and specifically sexual violence, being predatory towards women.

The world was a largely religious place for Shakespeare in a way I believe it is not today, certainly the Church doesn’t control society like it did back then, so I think considering the beliefs about animals and their significance plays a huge role in understanding Shakespeare’s centaurs in his plays.

As an example, the centaur was one of the most common mythological beasts to show up in the bestiaries. In them, the centaur is a hybrid from ancient mythology, being half horse, half man, whose human form from the front conceals a beastly nature behind, thus the centaur represented the sin of hypocrisy in the Christian tradition.

Sources for Centaurs in Shakespeare

Ovid is a well established source for Shakespeare, for many of his tales, it only makes sense to think Shakespeare would have used some of Ovid’s telling of centaurs in his plays.

In Ovid, the centaur was prone to violence and rape. At the Feast of Hippodamia, Ovid writes that one Centaur tried to violate the bride, the feast ends in a nasty violent battle. Shakespeare references the feast in two plays, Midsummer and Titus Andronicus

Come, come, be every one officious To make this banquet; which I wish may prove More stern and bloody than the Centaurs’ feast.
Titus Andronicus

Saggitarius, the Myth and the Constellation

The wisest, and in some references, oldest, of the centaurs was Chiron. He was calmer and less passionate than his peers, and as a result, the gods took Chiron into their counsel and educated him. Unselfishly, Chiron used what he had learned to teach the heroes of Greece like Achilles, Acteon, Jason, and Hercules.

It would be Hercules who would turn on Chiron and in a tragic twist of fate, shoot Chiron with a posioned arrow. Since Chiron was immortal, being a god, he wans’t able to die from the poison and instead was doomed to suffer endlessly. In order to escape this fate, Chiron gave his immortality away to Prometheus, the god who would create mankind. Zeus was so proud of Chiron that he created a constellation in his honor, the one called Saggitarius.

Medieval images of Sagittarius generally fall into three categories: centaurs, satyrs, and humans. Most of them are holding longbows, a few have crossbows.

Cuneiform inscriptions refer to Sagittarius as ‘The Strong One’, and the ‘Giant King of War.’ The Mesopotamians associated Saggitarius with Mars. Later astrologers would downplay the aggressive and blantanlty phallic attributes of Saggitarius, but medieval references refer to him as the “Dreadful Sagittary”,  and that exact phrase shows up in Shakespeare’s Troilus and Cressida.

Historically, the sign of Saggitarius stands as an emblem for the invincible courage and fervent valour of Mars. King Stephen of England, who usurped the throne in 1135, carried the centaur as his heraldic symbol for that reason.

Patroclus ta’en or slain, and Palamedes
Sore hurt and bruised: the dreadful Sagittary
Appals our numbers: haste we, Diomed,
To reinforcement, or we perish all. 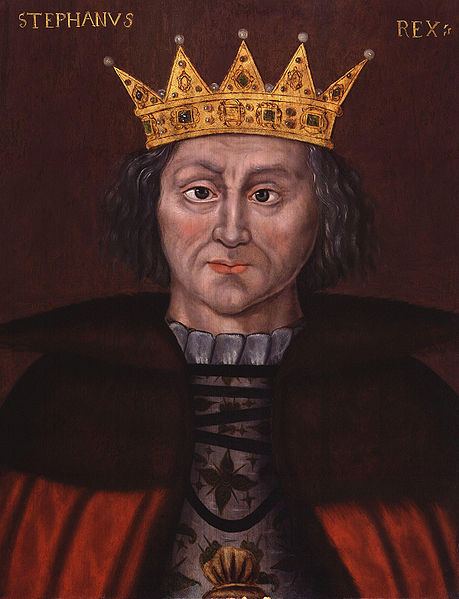 I must show out a flag and sign of love,
Which is indeed but sign. That you shall surely find him,
Lead to the Sagittary the raised search;
And there will I be with him. So, farewell.

This blogger who researched references to Stephen and France, found some history articles relating to the ensign of a sagittary.

The city of Blois, capital of Blesois (a county of France), used the ensign of a sagittary, as an emblem of hunting, much practised in that woody country, watered by the great river Loire. Stephen adopted the banner of the sagittary, in the civil war which he carried on in England against the rights of the empress Matilda. His residence being in London …. her partizans gave to Stephen the name of the Sagittary of London Park.

Stephen was close with Henry I, (I read that he was his uncle, also read Henry I was his brother. I’m unclear here and need to do more research) but Henry I supported Stephen and with Henry’s support, Stephen rapidly began to snap up land and possessions. After the Battle of Tinchebray in 1106, the County of Mortain adn the Honour of the Eye were confiscated form William of Mortain and given to Stephen. Very English and very Shakespeare-history-play items like the gift of the Honour of Lancaster and an altercation with the Count of Anjou all make me suspicious that these might have connections to Shakespeare’s history plays, or at the very least that they are part of the history knowledge Shakespeare used to write his works but unpacking/proving that is for another day.

If you like the history you are learning here on the show and would like to go deeper into the history behind the life of William Shakespeare, consider becoming an official member. Along with a physical welcome gift of Shakespeare swag we will send you when you sign up, you get exclusive access to our entire resource library of ebooks, diagrams, and maps, as well as to participate in the monthly Shakespeare mini-history courses only available for members.