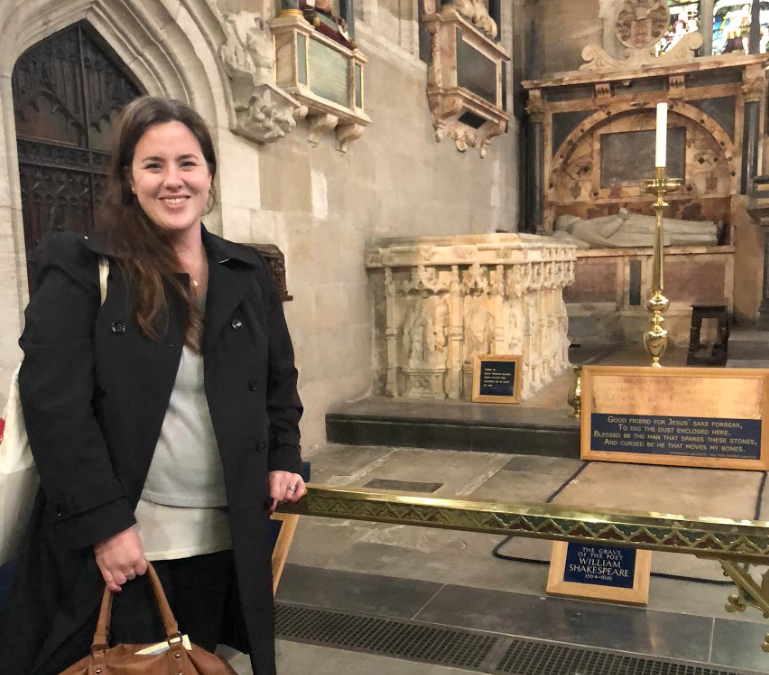 This past September I was honored to travel to England and receive the award for Best Shakespeare Themed Animation at the Shakespeare Shorts Competition for The Shakespeare Film Festival in Stratford Upon Avon, England.
Not wanting to miss the opportunity while I was there to see some of the Shakespeare history so close at hand, I stayed over a few days and here are a few of my favorite spots I visited while I was in town. In addition to seeing these places for the first time,  I was also scouting out the stops for our trip in September 2019 where we will be touring each of these locations with a professional guide and private exhibitions that go even deeper than you’re able to see on your own.

The most iconic stop for any bard lover is Shakespeare’s Birthplace. If you stay in or around Henley Street on your visit, you are within walking distance of the Birthplace. Situated conspicuously right in the middle of a busy and crowded street, the very first time I saw this place it took my breath away, mostly because I was walking along an otherwise unassuming street before rounding the corner to behold Shakespeare’s Birthplace–just like in the pictures! It’s truly amazing. When you walk through the exquisitely maintained Tudor home, you can stand in the very room where a young William took his first breath of life, and where he rather miraculously survived childhood despite many bouts of plague literally right outside his door for the first several years of his life.

Before you leave:
– Ask the costumed guide to take a picture with you beside the large picture window upstairs.
– Stop by the glass enclosed window that’s been preserved and see if you can spot a signature of some of the most famous artists who signed it when they stood where you are standing. People like Sir Walter Raleigh, Charles Dickens, or even Oscar Wilde, have all been here and signed the window. You cannot sign it today, as it’s preserved as a historical artifact, but you can search the existing signatures to see which famous author you can find.

The church is within walking distance of the Birthplace but you still might want a cab if you’re not used to walking or it’s bad weather. Considered England’s most visited Parish Church, this small and unassuming little church is truly gorgeous and the long tree lined path to enter it is just the beginning. Once you enter through the ornate door, you will truly want to stop and stare for a while at the high arches, the beautiful stained glass, and talk with the parishioners there. You are asked to pay a small donation to enter the sanctuary and behold Shakespeare’s grave, but it’s only 5 pounds to get to lay your own eyes on the actual grave of William Shakespeare, and read the foreboding curse warning visitors against moving his bones.

Before you leave:
– Look at the other graves inside Holy Trinity Church. You’ll notice that Judith Quiney’s grave is obviously missing from the family graves laid to rest at Holy Trinity Church. No one knows exactly why she isn’t there. Can you find her?
– Pay close attention to the large stained glass window before you arrive at Shakespeare’s grave, that was a gift to the town of Stratford Upon Avon from the United States.
The gift shop has adorable mementos and I especially love the small bear.

William Shakespeare was 33 years old when he bought the second largest house in Stratford Upon Avon in 1597. While the original house is now demolished, the site contains a floor map you can walk through of what archaeologists believe is the outline of the original structure.Shakespeare’s daughter once entertained Queen Henrietta, wife of King Charles I, here at New Place. What is really the star of this stop, though, are the gardens. From the knot garden to the medicinal herb gardens, there’s more Shakespeare history than meets the eye and you’ll need a keen eye to find it, but once you do, it’s unforgettable.

Before you leave:
– Nash’s House was once connected to New Place, and now is an adjacent building.
– At the rear of New Place an old mulberry tree grows, and legend holds the tree is descended from an old tree planted by Shakespeare.
After you go through the gate, keep walking, pass through the Tudor Knot garden and go on to the Great Garden. There, you’ll find the Wild Bank of plants which are mentioned in Shakespeare’s works.

The Schoolroom and Guildhall are within easy walking distance of Holy Trinity Church, but if you’re new to the area you might walk right by it. It’s down Church Street and a huge sign hangs out from one of the buildings announcing the location, but when we visited the first time, we ended up going in the gift shop at the back instead of through the front where you enter for the tour, and we weren’t sure we had found it to start with because it’s so tucked away to the side. So do not be afraid to ask if you’ve got the right place when you get there. William Shakespeare attended King Edward VI grammar school in Stratford Upon Avon. The old schoolroom is still there and you can walk through the very room where a young William Shakespeare read his first play, and performed in the annual school performance. Described as “one of the most atmospheric, magical and important buildings in the whole of Britain” by historian and broadcaster, Michael Wood, and within walking distance of Shakespeare’s birthplace, this spot is definitely on the list of don’t miss places.

Before you leave:
– Practice your Tudor school lessons, and write with a real quill and ink.
– Dress up like a Tudor student and take a photo of yourself to keep.
Check out the medieval wall paintings at the Guildhall

This stop is within walking distance of the Schoolroom, Birthplace, and Holy Trinity, but you may feel like you’ve gone for a hike if you go straight here from the Birthplace. I suggest visiting the Schoolroom first, then once you leave there, keep walking, and you’ll see the chapel across the street. Technically, I think the map shows this as a corner. In my estimation, it was really more like a Y-shape, but I digress. This spot is also easy to miss if you don’t have a guide with you, but it’s worth stopping in. Look for the sign that says “Guild Chapel.” There’s a traffic light just outside, if that helps you know where you are. Built by the Guild of the Holy Cross, the prominent religious and social organisation grew to become central to medieval life in Stratford-upon-Avon. During the English Reformation, the paintings on the walls of the Guild Chapel were ordered to be removed, and it was Shakespeare’s father–John Shakespeare–who, as town bailiff, was in charge of making sure that happened. Rather than erase or demolish them, however, John Shakespeare lime washed over the paintings, preserving them. 45o years later, they were uncovered, revealing a slice of what life was like for ordinary townspeople in Stratford Upon Avon almost 500 years ago.

Before you leave:
Stop and see all the frescos, walk all the way to the back of the chapel and really take your time with them. The paintings look more like graffiti, really, than high art, but contemplating what they might have represented for Shakespeare and his fellow townspeople before they were washed over is endlessly fascinating. It was Shakespeare’s father, John, who was charged with painting over these depictions. At the time, Elizabeth felt they were too catholic to remain on display. The whitewashing, as opposed to demolishing them, is what saved them to be visible to us today.

Located in Shottery, Anne Hathaway’s Cottage is worth the trip, but I recommend taking a cab instead of trying to walk here from the Birthplace. Particularly if you’re not familiar with the area, it can be hard to find, and it is further than some of the other spots in what I call “stratford proper.” For new visitors, a cab here is a solid plan. This cottage is the place where Anne Hathaway lived with her family until she married William. Cottage makes the place sound small, but originally it contained over 90 acres of land, and the building itself has 12 rooms. It belonged to the Hathaway family until the late 1800s when it was bought by Shakespeare Birthplace Trust. The Trust removed the additions and alterations which had been made to the original structure and returned it to the state you could have expected to see it in Shakespeare’s day. Known as Hewlands Farm when Shakespeare was wooing the young Anne Hathaway, the house is now attached to beautiful gardens and is open as a museum.

Again, take a cab to get here. A working farm, Mary Arden’s farm is designed to show you what kind of livestock and animal life would have been living in Stratford Upon Avon when Shakespeare was a resident there. Mary Arden was William’s mother, and her father Robert, was a member of the Guild of the Holy Cross (which painted the ancient paintings at the Guild Chapel we mentioned earlier). This farm represents the family home where Mary lived up until she married John Shakespeare the late 16th century.

Located just down from Holy Trinity Church, this stop is within walking distance of your hotel if you stay in Stratford Upon Avon near Henley Street. Built in 1613, three years before Shakespeare died, Hall’s Croft is the home of John Hall and Susanna, Shakespeare’s first born daughter. The structure is impressive and includes architecture styles that reflect John Hall held a considerable amount of wealth and status. The displays inside the home additionally add to the Hall’s high society reputation, commiserate with his role as a town medic. In addition to the gorgeous home, the property contains a substantial walled garden with elaborate roses and beautiful borders.

Travel with us this September!

Come with me and Philippa Brewell of British History Tours in September 2019 when we visit all of the places on this list! Our guided 5 Day/4 Night Tour of Stratford Upon Avon and London, England will take you through all the major stops of Shakespeare’s life from his birth to his grave. With historical guides and private tours not available to the general public, you don’t want to miss this opportunity!